From Cannes headliner to pay cable

Why is the exasperating and delightful "Pleasure of Being Robbed" -- a breakthrough American micro-indie about a charming female sociopath -- barely getting released? 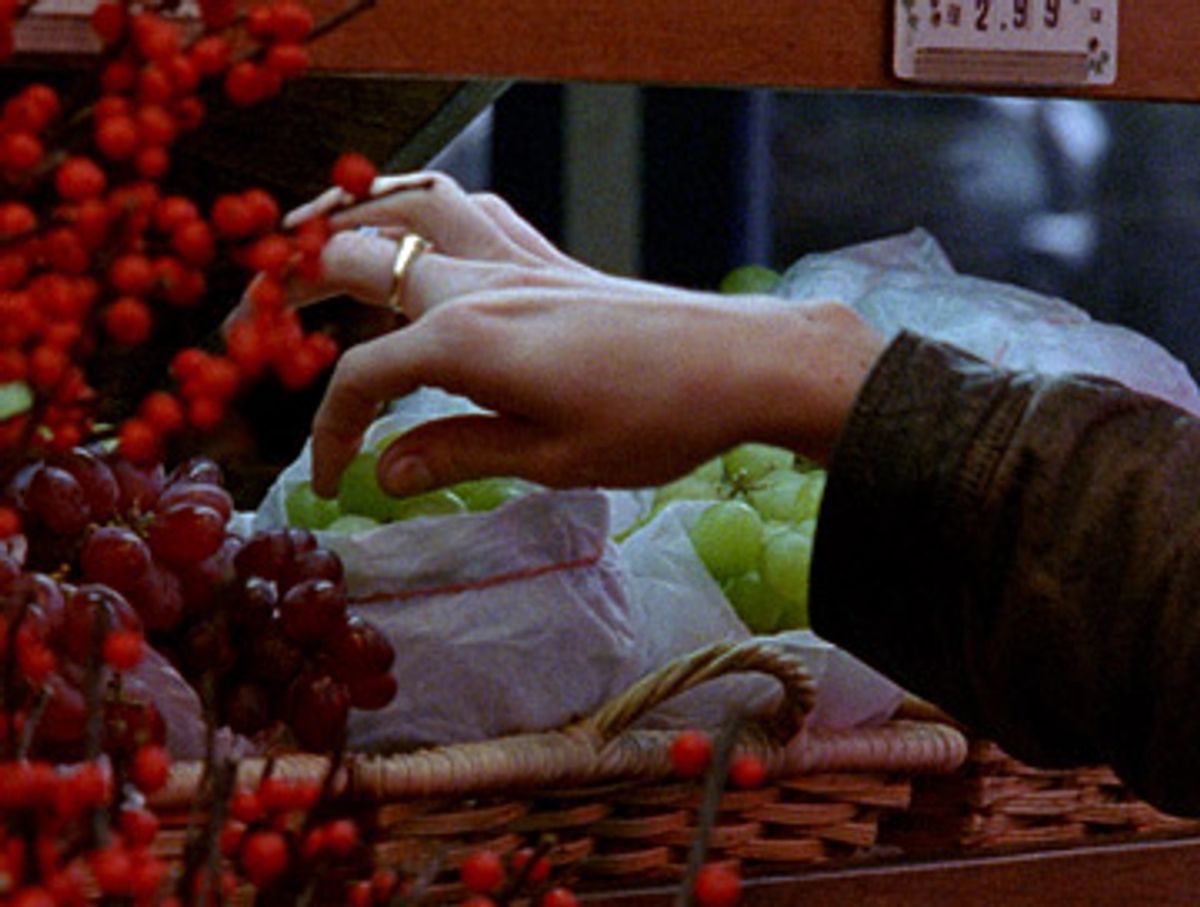 Listen to the interview with Red Bucket Films

It's possible and even likely that "The Pleasure of Being Robbed," the debut feature from 24-year-old director Josh Safdie and his pals in the New York-based film collective called Red Bucket, has already had its big moment in the public eye. You've never even heard of it, you say? Welcome to the 21st century movie business, people.

You see, after premiering last spring at the South by Southwest festival in Austin, Texas -- where I and a lot of other people missed it -- Safdie's ultra-low-budget yarn about the adventures of a 20-something female sociopath leapt to sudden prominence as the closing-night film, and only American selection, in the Directors' Fortnight festival at Cannes. This is the festival formed by the French directors' society in 1969 in open rebellion against the Cannes main event; the festival that has helped launch the international careers of Martin Scorsese, Werner Herzog, Spike Lee, Jim Jarmusch, Michael Haneke, Sofia Coppola, the Dardenne brothers and many more.

It's a huge honor for any film to get that slot, not least a 71-minute overgrown short from an unknown American director who describes his budget as "way under $100,000," a picture shot on 16 mm film, guerrilla-style, in New York public spaces, without any of the required permits or clearances. (Perhaps Safdie paid for this karmically, since he says $30,000 worth of fancy Russian-made lenses, not covered by insurance, were stolen out of his car during filming.) It's notoriously difficult and expensive to shoot at the Central Park Zoo, for example, and I'm still not sure how Safdie managed an illegal scene there that featured two actors in cop uniforms and his star and co-writer, Eléonore Hendricks, in handcuffs. (Wait till you see the "special effect" in that scene. I'm saying nothing more.)

Yet for whatever set of reasons -- maybe because it had already played at a North American festival, or just because the high muckety-mucks didn't like it enough -- "Pleasure of Being Robbed" was passed over by the Toronto and New York festivals. Amid the collapsing indie-film economy, it's getting only a brief New York theatrical release before going to IFC's Festival Direct cable-TV platform. So it goes, I guess. I'm already on record as loving this invigorating little movie, with its French New Wave-style blend of brashness, tenderness and pain. In fact, I think it's something special, with all its flaws and uncertainties and internal contradictions. But I also get that it's a very particular flavor, not pleasing to everyone's palate.

Let's be honest: "Pleasure of Being Robbed" drove a lot of people crazy at Cannes, including people whose tastes I respect. I could flatter myself by claiming that they didn't get it and I did, but things are never entirely that simple. What I saw as a challenging, open-ended emotional and psychological journey with an exasperating but irresistible character -- something like a slacker-era blend of Bresson's "Pickpocket" and Godard's "Breathless" -- struck other viewers as self-indulgent pseudo-rebellion.

The movie's central enigma or problem or pivot point is Eléonore -- not Eléonore Hendricks, the oddly compelling young actress who plays her, but the even more odd and compelling character with the same first name who steals a stranger's wallet within the first three minutes and proceeds to do many more irresponsible and reckless things from there. Eventually she takes a woman's handbag in a bar, then finds a set of Volvo keys in it and steals the car off the street. Since she doesn't know how to drive, she enlists her friend Josh (director Safdie) to teach her. He agrees and asks her to drive him home, not quite mentioning that he's moved to Boston.

It's important to note that "The Pleasure of Being Robbed" is a lean, tight and not very talky picture; its plot may have a peculiar shaggy-dog quality but things happen and it's actually going somewhere. This isn't a movie that goes spelunking into the protagonist's psychology in any obvious way, or tries to apologize for her. Whether you find Eléonore adorable or loathsome or somewhere in between is entirely on you. It is also absolutely not one of those earnest and sincere movies about 20-somethings and their relationship problems. I was really, really grateful about all those things.

As Safdie said when I met him and the Red Bucket gang in a tiny public square just across the street from the Cannes beachfront, he had no interest in making one of those stereotypical young-relationship films. (If you have the patience to listen to this group interview, it's pretty entertaining.) "You know, with no disrespect to my friends, I don't have any interest in sitting around and talking about that stuff," he said. "If we do have those conversations, they're pretty awkward. We're just a bunch of jokers, a bunch of overgrown kids who think we're really old. Our sensibility is like cartoons. You never see Bugs Bunny talking to Daffy Duck about his problem with his 20-something girlfriend who answers the phone during sex.

"The things that make me think about life, and what's so sad and what's so happy about it, are not rooted in the modern problems of today's relationships," he went on. "I don't like to dwell on those things, they're agonizing -- and in a completely different way than I think movies should be agonizing." I think you can see the central ambiguity of "The Pleasure of Being Robbed" in those words: On one level, Eléonore is a cartoon character, a force of chaos and anarchy. On another level, she seems like a real young woman in extreme pain, whose efforts at human contact are perverse and destructive.

"She's a funny little lady, you know?" laughed Hendricks. "A lot of people laugh at her, and a lot of people cry because of her, I guess. She's just a lonely girl who's looking for a friend, and she's looking in the wrong places." As Safdie himself says, "The Pleasure of Being Robbed" is in some sense his love letter to Hendricks; they became a real-life couple while making it. But the filmmakers fully understand that the fictional Eléonore is more a maddening character than an alluring one. "She's a very callous person, very selfish," said Hendricks. "She's got no regard for the person she's stealing from. You want to shake her and say, 'No, Eléonore, that is not OK! Just quit it!'"

There's an element of fairy tale or children's story to Eléonore's journey, as Safdie put it, which is only augmented by that weird, late special-effects sequence I'm not telling you about. "For one thing, she's got the sensibility of a child," he said. "She lacks an adult moral compass." His on-screen character, Safdie added, decides to go on a road trip with Eléonore even though he knows the Volvo is stolen and that she doesn't know how to drive. "It's like when you have a friend and you consciously know something's wrong with them. Being friends with them is not a good idea. But you go ahead and do it anyway. There's something beautiful about just swallowing mistakes."

"Swallowing mistakes!" repeated Hendricks. "I like that. You know, recently Josh and I walked along the subway tracks in Brooklyn, from the Lafayette Avenue station to the Clinton-Washington station." At this I interrupted her; I ride that line, the C train, almost every day. Wait a minute, I asked. You walked from station to station, through the subway tunnel? She laughed. "You gotta keep life interesting. When you live in the city, sometimes you get dulled. Regular-day stuff gets boring. You have to challenge yourself a little."

"The Pleasure of Being Robbed" is now playing at the IFC Center in New York; other cities may follow. Beginning Oct. 22 it will be available on demand via IFC Festival Direct on many cable-TV systems.