A country in shambles, under GOP rule

Efforts to blame Democrats for the country's deep woes assume deep stupidity on the part of the glorified Regular Voter.

There are few things that make political coverage more unbearable -- and more distorting -- than The David Brooks Syndrome: the extremely patronizing and ill-informed pretense, shared by media and right-wing elites alike, that they can study the Little Common People like zoo animals, and then translate and give voice to their simple-minded and ignorant though good-hearted, salt-of-the-earth perspectives. Rarely has this mentality been so transparent as it has been in the wake of the Biden-Palin debate, as pundits and right-wing polemicists like Brooks, Peggy Noonan and Rich "Starbursts" Lowry rushed forward to proclaim giddily that Regular Americans would love Sarah Palin and this love could even help McCain win, despite -- or, really, because of -- her vapid, content-free telegenic presence.

Actual empirical evidence -- called "polling data" -- has almost uniformly demonstrated how false these condescending pats on the head are, as every single poll conducted thus far (at least that I'm aware of) found that Americans believed that Biden won and is the far more serious and knowledgeable candidate, and huge numbers continue to have profound doubts about Palin's fitness for office. And the first tracking poll to report a full post-debate day of polling -- the Research 2000 poll for Daily Kos -- finds Obama with a 13-point lead, his largest ever. This joint right-wing/pundit claim that Americans would swoon in the face of Palin's empty chatter, self-conscious folksiness and chronic, seizure-like winking says much more about those making the claim than it does about their Regular People subjects.

As polling data conclusively demonstrates, the mindset of the voting public is infinitely more rational and substance-based than the pundits and the Right fantasize when they lyrically praise the Regular American -- at least it is in this time of perceived (and actual) crisis. What's happening in this country, and in this election, is rather simple and easy to see: (1) the country is in total shambles -- possibly far worse than what people even realize; (2) we have lived for the last eight years under virtually absolute GOP rule; (3) the public knows this; (4) the Republican President and his party are therefore intensely -- historically -- unpopular; and (5) the voting public doesn't want to continue living under the rule of the same faction and same political party that has driven the country into the ground. Having Sarah Palin drop her gerund endings and desperately trotting out the standard, tired GOP attack ads to depict Obama as a radical, fist-pumping, America-hating, unhinged socialist -- when everyone can see with their own eyes that he isn't -- won't change any of that.

That the Right believes in the fundamental stupidity of the American voter while simultaneously pretending to revere and speak for them them is reflected in their belief that they can successfully blame the financial crisis and the country's woes generally on Democrats, who -- while hardly covering themselves with glory -- haven't had any meaningful power in this country for as long as one can remember. Ponder how stupid you must think Americans are to believe that you can blame the financial crisis on the 2004 statements of House Democrats about Fannie Mae and Freddie Mac when that was a time when the GOP controlled all branches of the Government and nothing could have been more inconsequential than what Barney Frank or Maxine Waters, languishing in the minority in Tom DeLay's tyrannical House, said or did about anything. 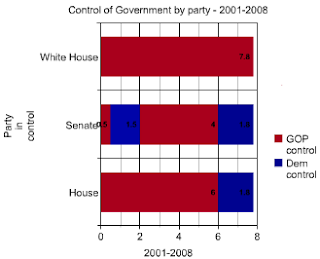 And the reality is even more imbalanced than that graph illustrates: between (1) the tiny margins the Democrats have had when controlling the Senate, (2) the true functional majority of "GOP + Blue Dogs" in the House, (3) the extraordinary centralization of power in the White House, and (4) Democratic complicity and fear, it is GOP policy which ends up prevailing in virtually every instance of alleged "bipartisanship" even during those tiny slivers of ostensible Democratic control.

The overarching reality of the country is that we've lived under unchallenged Republican rule and the country has virtually collapsed on every level. No matter how dumb Rich Lowry and David Brooks fantasize The Regular People to be, those facts are far too glaring to suppress.

UPDATE: In comments, Harksaw suggests adding the Supreme Court to the graph, based on which party appointed the justices. Doing so produces this: 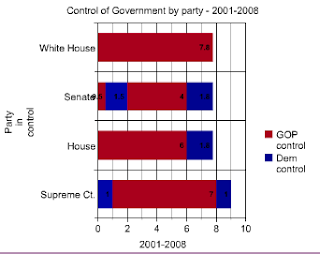 We've been an overwhelmingly Republican-dominated country for the last eight years (at least) and the results of that couldn't be clearer -- or more devastating.

Rasumussen Report today has a new poll finding that Americans, by 8 points, believe Biden won the debate with Palin. Moreover, Gallup's first tracking poll to include post-debate results finds Obama equaling his largest lead yet -- 50-42, while Rasumussen today continues to show Obama over 50% and thus concludes: "The stability of these results suggests that the McCain campaign faces a very steep challenge in the remaining few weeks of Election 2008." So much for the Right's euphoric claim that Sarah Palin would electrify The Normal Americans and change the face of the race. If anything, McCain has sunk further in the wake of Biden-Palin.