How Palin played in Green Bay

Republican debate watchers praised a "tough" and "witty" performance from the Alaskan governor, but on the whole were surprisingly subdued. 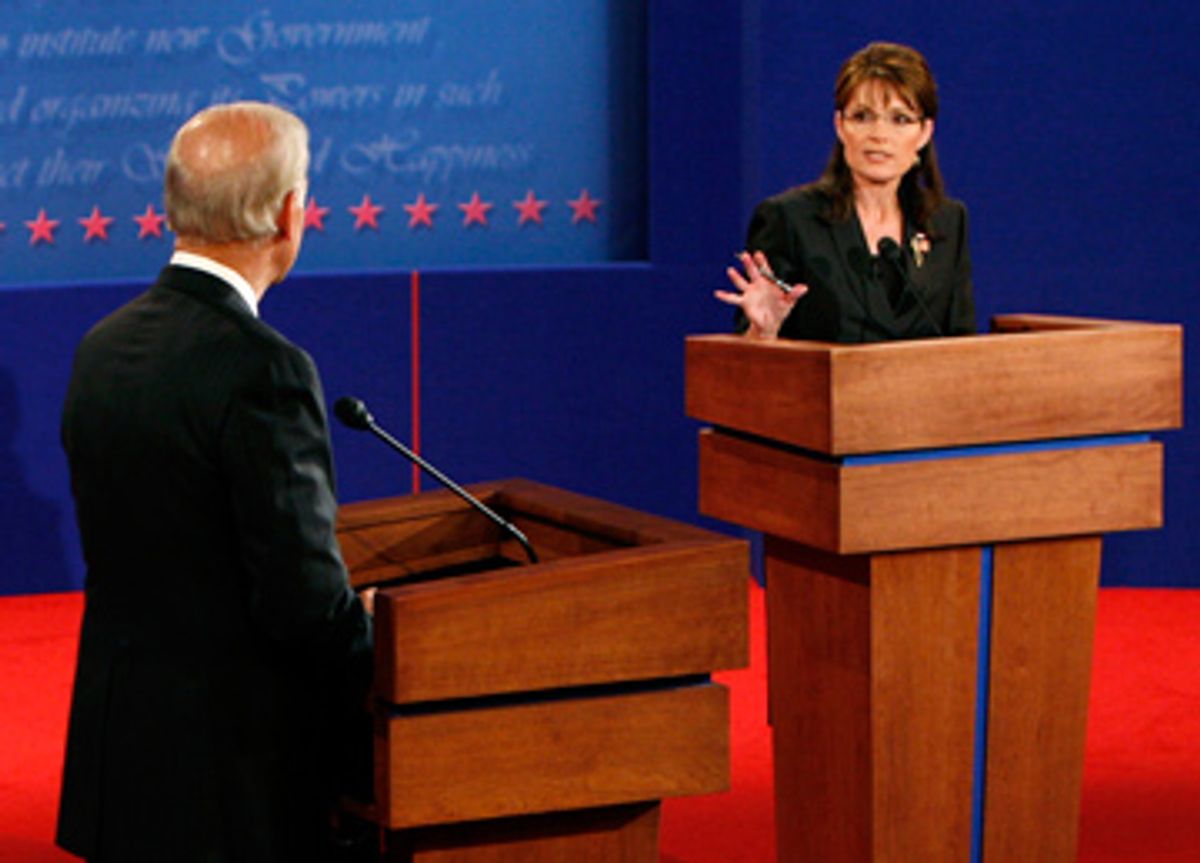 Craig Summerfield, the local McCain-Palin coordinator, offered a few rueful words to the 25 phone-bank volunteers who had just put down their call sheets to watch the vice-presidential debate on an old-fashioned television set with rabbit ears. "I apologize for NBC as the network we're watching," Summerfield said, "but it's the one that comes in best." From the back of the local headquarters, a middle-aged woman shouted out, "We can't have Fox News all the time."

Ninety minutes later -- even among the GOP volunteers who had been worried about McCain's vice-presidential pick after the disastrous Katie Couric interview -- there was not a sliver of doubt about who won. "Palin came across as tougher than ever before," said Karen Seas, a mother of three with frosted silver hair. "She was witty too." Even though Joe Biden had been the butt of wisecracks and occasional boos all evening, there was surprisingly little venom directed at him when the debate was over. "Biden did control himself very well," said Barbara Catalano, a registered nurse, who was working on the phone bank for the first time. "He must have been well-prepared because he didn't get angry."

Watching a debate in an intensely partisan setting can be a through-the-looking-glass experience since the verdict has been determined before the trial. But what was telling Thursday night was that the mood of the volunteers was subdued. At times it seemed like the delivery of six pizzas was a more dramatic event than the most over-hyped vice-presidential debate in history. This emotional reticence was in no way a reflection on Palin, but rather a reaction to the overly scripted debate. As Stephanie Kundert, the 26-year-old campaign manager for state Rep. Karl Van Roy, said after blogging the debate for a conservative website, "In parts, it was boring."

While the fuzzy TV picture was a bipartisan affliction, Biden was the only victim of the balky sound, which cut out in the middle of many of his answers. The first time it happened, a middle-aged woman cracked, "That's one way to shut him up." About the fifth time Biden was inadvertently muted, Tom Van Drasek, the Brown County Republican chairman, announced, "It's a bull-shit detector."

The crowd at the headquarters in a small indoor shopping center in Allouez, just south of Green Bay, did offer its share of claps and whoops to Palin's one-liners. Nothing scored higher on the in-room Richter Scale than Palin's put-down of Biden's attacks on the Bush record: "Say it ain't so, Joe. There you go pointing backwards again." The Palin policy position that received the loudest and most spontaneous applause was her upholding "the traditional definition of marriage" as "between one man and one woman." But when Biden joined in to say that he and Barack Obama also oppose gay marriage, a woman snarled, "Flip-flopper."

Sometimes what matters most in politics, as in detective work, are the dogs that don't bark. When Biden called Dick Cheney "the most dangerous vice president that we probably have had in American history," there was not a single murmur of derision. Even among loyal Republicans, Cheney-bashing seems par for the political course. So does Iraq war fatigue. When Palin declared with passion in her voice, "We have got to win in Iraq," just a lone woman shouted "Yay!" Only when Palin upped the rhetorical ante and claimed that the Obama-Biden plan for Iraq was "the white flag of surrender" was there a louder response.

Here in Green Bay -- a political no-man's land that both McCain and Obama have visited in the last two weeks -- it was hard to get a sense that Thursday night's veep-fest was a transcendent experience for voters, whatever their partisan leanings. Rather the debate seemed more like that 1970s space visitor, Comet Kohoutek, a debate that promised to light up the skies but quickly turned into a celestial disappointment.

It is not that political passion has died among the Republicans. Palin hit just the right (wing) note in her closing statement when she lamented the role of "the mainstream media kind of telling voters what they've just heard." But on a night when both Palin and Biden seemed to be working overtime to make themselves bland, beating up on the media seemed a lot more fun than watching the two would-be vice presidents woodenly debate policy.