Citizens who produce fictitious films depicting "humiliation" and "degradation" will be sent to prison. Government officials who do that in reality will be immunized.

On Friday in Tampa, Florida, Paul F. Little was sentenced by a federal judge to 3 years and 10 months in a federal prison after being convicted of the grave and terrible crime of distributing pornography "over the Internet and through the mail" -- films featuring only consenting adults and distributed only to those consenting adults who chose to purchase them. Even though he lived and worked in California, the Bush DOJ dragged him to Tampa, Florida in order to try him under Tampa's "community standards," on the theory that his website used servers physically based in Central Florida and some of the films were sent to Tampa customers who purchased them.

These porn prosecutions are the by-product of the demands from Senate Republicans such as Orrin Hatch, who simultaneously argue that (a) the Threat of Muslim Terrorism is so grave and "transcendent" that we must dismantle our entire Constitutional system and turn ourselves into a lawless surveillance state in order to combat it, and (b) the FBI and DOJ should use their resources to prosecute American citizens who produce consensual adult pornography. The same Alberto Gonazles who decreed the Geneva Convention to be a quaint relic in order to legalize torture announced in 2005 that adult pornography prosecutions would be his "top priority" as Attorney General (at his confirmation hearing, Michael Mukasey assured Hatch he shares the same concerns about "mainstream, adult pornography" as Gonzales did).

Because the films which Little produced included scenes involving sadomasochism, the Bush DOJ alleged, and the federal court found, that the films were not merely pornographic, but also "obscene," and thus illegal (Little's lawyers argued, unsuccessfully, they were intended primarily for distribution in Europe, where such films are legal). Ironically, Little's defense to the obscenity charges was quite similar to the defense which the Bush DOJ itself, years earlier, had embraced in order to claim that Bush officials were not engaged in "torture" when subjecting helpless detainees to gruesome treatment: namely, because the acts in question didn't involve the infliction of severe pain, they weren't illegal:


In seeking a more lenient sentence, one of Little's attorneys argued that the videos were not sadomasochistic. "Urine and vomit, our argument is, isn't sadistic or masochistic," James Benjamin said.

"What about humiliation?" the judge asked.

That, Benjamin replied, isn't in the legal definition of sadomasochistic.

"Clearly, there seemed to be pain," Bucklew said.

That was acting, Benjamin said. "The person that was involved in the conduct sat [in court] with a smile on her face and wrote your honor a letter saying, 'Judge, this was a beautiful part of my life.'"

"I don't even think this is a close call," the judge said. The videos portrayed "sadistic conduct . . . This is clearly degrading, clearly humiliating and intended to be so."

There was no suggestion that any serious violence was ever inflicted or that the adult actors in the film were anything other than completely consensual. But the court found that the depiction of severe pain was not required for conviction; instead, mere humiliation and degrading treatment was sufficient to render the films criminal and to warrant a long prison sentence. As the judge put it: "This is clearly degrading, clearly humiliating and intended to be so." So, having already bankrupted Little with the DOJ's prosecution, it's now off to federal prison -- for the next 4 years of his life.

But for our highest government officials, including the ones responsible for this prosecution, we have a different story altogether. In 2002, the Bush DOJ radically re-defined "torture" and illegal treatment of detainees to exclude anything that falls short of "the pain accompanying serious physical injury, such as organ failure, impairment of bodily function, or even death." The DOJ's John Yoo even decreed that the President could legally order "'scalding water, corrosive acid or caustic substance' thrown on a prisoner" and possibly even "slitting an ear, nose or lip, or disabling a tongue or limb."

But in all events, merely degrading or humiliating someone -- or even subjecting them to severe mental stress and intense though temporary pain -- magically became perfectly legal. And just to be sure, our Congress retroactively immunized anyone and everyone in the Government who may have been involved in any state-sanctioned line-crossing behavior even after the lines were radically re-drawn, so that this, from the U.S. Army's own investigation of Guantanamo, was and is perfectly legal behavior -- when engaged in for real by the U.S. Government against helpless detainees, but not by film-makers doing it for entertainment with consenting adults:


He was deprived of sleep for almost two months, stripped, held on the floor and sexually abused by a female interrogator, forcibly hydrated with liquids while shackled to a chair and not permitted to go to the bathroom. His CCR attorney, Gita Gutierrez, reported that Mohammed was still suffering from the effects of his torture and abuse: He "painfully described how he could not endure the months of isolation, torture and abuse, during which he was nearly killed, before making false statements to please his interrogators."

But, when the U.S. Government does it, none of it is "torture" because it is mere humiliation and mental distress and severe degradation -- but not "serious physical injury, such as organ failure, impairment of bodily function, or even death."

So, to recap, in the Land of the Free: if you're an adult who produces a film using other consenting adults, for the entertainment of still other consenting adults, which merely depicts fictional acts of humiliation and degradation, the DOJ will prosecute you and send you to prison for years. The claim that no real pain was inflicted will be rejected; mere humiliation is enough to make you a criminal. But if government officials actually subject helpless detainees in their custody to extreme mental abuse, degradation, humiliation and even mock executions long considered "torture" in the entire civilized world, the DOJ will argue that they have acted with perfect legality and, just to be sure, Congress will hand them retroactive immunity for their conduct. That's how we prioritize criminality and arrange our value system.

UPDATE: Put another way, top Bush administration officials have been immunized and protected despite -- according to a former U.S. Army Major General -- being responsible for real sadistic obscenities (i.e., "war crimes") as illustrated by these: 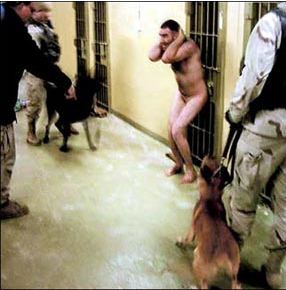 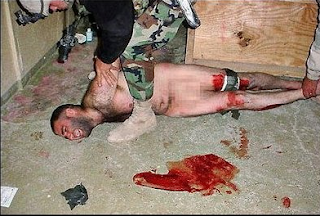 Meanwhile, citizens who have filmed fictitious depictions, for entertainment purposes, of far less sadistic scenes are sent to prison, and their websites now have this lovely notice plastered on the front page: 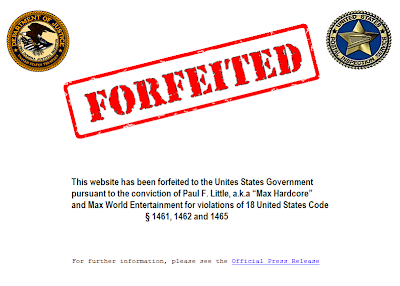