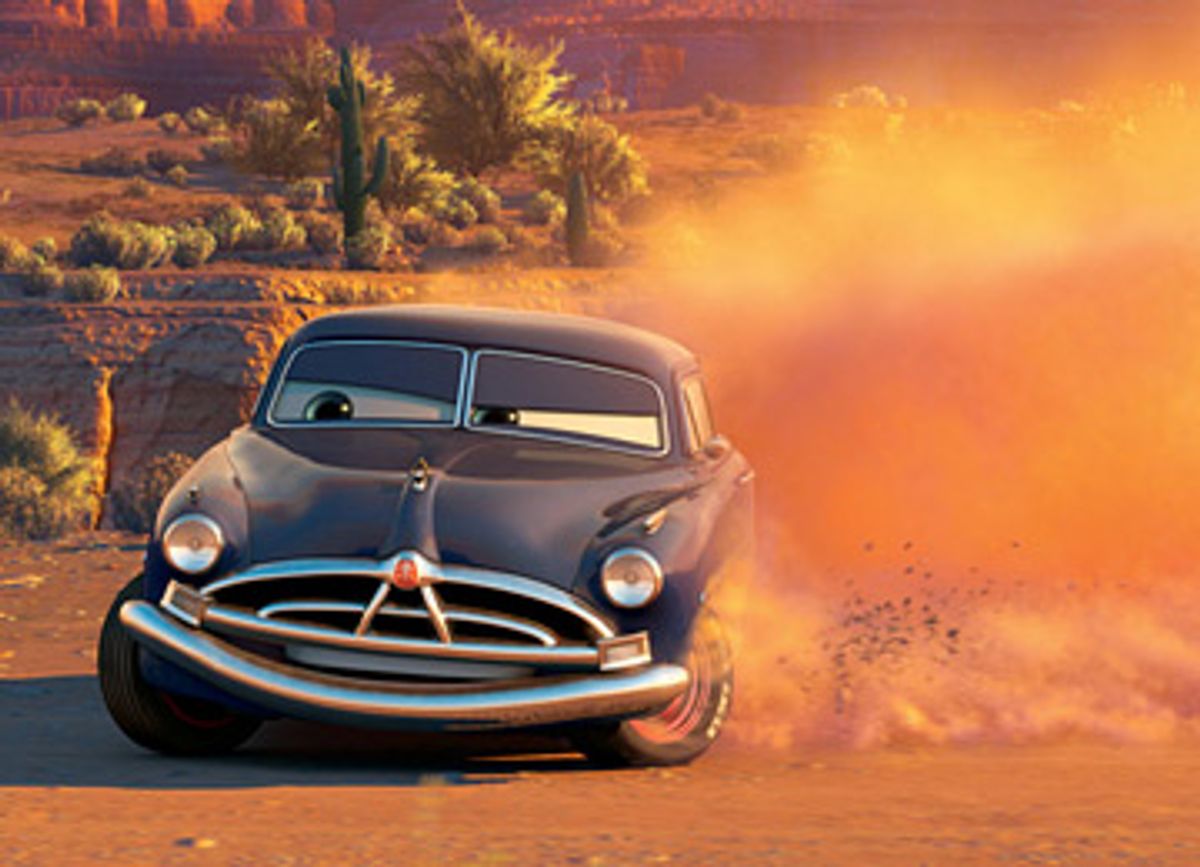 Is that woman from Alaska still hanging around? I'm only sorry that cookie-and-pretzel impresario, sometime race-car driver and all-around masculine icon of our time Paul Newman won't be around to see her banished back to her split-level igloo, the one from which she can see Vladimir Putin's head rising, dirigible-like, over the distant Russian horizon. Well, I'm sorry about other things too, but I'm definitely sorry about that.

My unsupported and definitely unrequested political analysis, before we move on to the real news: If Barack Obama is indeed elected president, then Sarah Palin will indeed be the Republican nominee in 2012 -- and will go down in a Goldwater-esque coast-to-coast wipeout. Will she, like Goldwater, be the sparkplug who fires an entire new generation of American nutso crusaders? I'll get back to you on that one.

I don't think I had completely grasped that Newman was gone, at the level of emotional reality, until I was sitting around with my 4-year-old twins on Saturday morning, watching "Cars" for about the 15th time, and came face-to-face with the fact that crusty Doc Hudson of Radiator Springs (aka Fabulous Hudson Hornet, the three-time Piston Cup winner) was his final role. Other people have remarked on this, I know, but what occurred to me while watching was that it's a damn fine role to go out on. OK, so he's playing a talking cartoon car. But what a car it is -- a vintage Newman car-acter, you might say -- mistrustful, introspective and damaged, and beneath it all far more eager to give and receive love than he'd ever admit.

My kids only know Paul Newman as the guy on the knockoff Oreos package and the voice of Doc, and I haven't told them that he's dead. They've lost two grandfathers, a great-grandmother, a bunny and a dog in the last 16 months. It's just too damn much. They've never seen Newman act, in truth, but he comes attached to their favorite movie and their favorite snacks, so of course they love him. And I've seen how big their eyes get every time they sit through the awesome, growly hanging-judge speech Doc gives when he first meets Lightning McQueen, the feckless hero of "Cars" who's badly in need of a father figure and some life lessons: "All right, I wanna know who's responsible for wrecking my town, Sheriff. I want his hood on a platter! I'm gonna put him in jail till he rots. No, check that ... I'm gonna put him in jail till the jail rots on top of him, then I'm gonna move him to a new jail and let that jail rot."

In due course, if they're interested -- and my daughter definitely will be -- they can see "Hud" and "Cool Hand Luke" and "Cat on a Hot Tin Roof" and "The Hustler" and whatever else you want to talk about. (My favorite semi-unsung Newman roles, for what it's worth, are as Ross Macdonald's detective hero Lew Harper in "The Drowning Pool" and his starring-directing role in the Ken Kesey adaptation "Sometimes a Great Notion.") But to Desmond and Nini and a whole generation of other kids around the world, Paul Newman will always be first and foremost a crusty old eight-cylinder Hudson Hornet with a secret passion and killer dirt-track skills. If Newman ever thought about that in his last days, I bet he was delighted.

I'm already on record as arguing that Steven Soderbergh's four-hour "Che" -- which just got its United States premiere at the New York Film Festival -- is a spectacular achievement, the best-executed and most intriguing work of his career. Still, there's no disputing that it's a dry and demanding work, one that steadfastly refuses most of the conventional satisfactions of narrative cinema. Here's the money quote, I suppose, from my Cannes review:

"What Soderbergh has sought to capture here is a grand process of birth and extinguishment, one that produced a complicated legacy in which John McCain, Barack Obama and Raúl Castro are still enmeshed. There will be plenty of time to argue about the film's (or films') political relevance or lack thereof, to call Soderbergh names for this or that historical omission, for this or that ideological error. He's made something that people will be eager to see and eager to talk about all over the world, something that feels strangely urgent, something messy and unfinished and amazing."

An interesting critical debate has broken out over "Che," as summarized on GreenCine, and it isn't exactly on ideological grounds, although we may get that later. (None of the conservatives complaining about the picture as a work of commie-pinko asskissology have yet seen it, to my knowledge.) I'm in near-total agreement with Glenn Kenny, for example, that those who complain about the film's lack of audience-relatable characters or conventional biopic structure are missing the point -- or, more fairly, that Soderbergh has fulfilled his vision and they simply don't get it or don't like it. (Kenny may or may not be directly dissing Karina Longworth at SpoutBlog, whose tireless film coverage I frequently enjoy. How's that for Kissinger-style neutrality?)

Even after all this time and all these movies, nothing is less forgivable than a movie that aspires to reach a relatively large audience but declines to be "entertaining," in the normative sense of that word. Furthermore, we're still so paralyzed by the politics of the Cold War era that we can't abide to see them presented as ambiguous drama (which is redundant, because all drama worthy of the name is morally, ethically and politically ambiguous). Soderbergh offers no good-vs.-evil Manichaean shadowplay in "Che," and that of course will frustrate partisans and ideologues of a ll kinds. In the fullness of time it will be recognized as a great achievement.

A few weeks ago I interviewed writer-director Azazel Jacobs about "Momma's Man," an eccentric fictional film mostly set in the cluttered, living-museum apartment where his parents, old-line New York artists Ken and Flo Jacobs, have lived for 40 years. If you want to check out what Ken Jacobs -- pretty close to a legend in the small and insular world of experimental film -- has been up to all that time, TankTV is hosting an online film festival devoted to his work. Jacobs' movies have been compared to dreams, hallucinations or fugue states; once you get past your initial resistance to watching something so different from ordinary cinema, you may find yourself mesmerized.

Speaking of hopeless little films I have defended, it's never OK to snark about other critics, is it? So I shouldn't point out that the Paper of Record ought to be thoroughly embarrassed for publishing this slipshod, superficial review that utterly failed to engage with the formal elements or themes of Josh Safdie's "The Pleasure of Being Robbed," which I covered last week? Right, that's what I thought.

Auto Industry Beyond The Multiplex Movies The New York Times