What bailout? The Dow drops 740 as a financial panic sweeps the world. 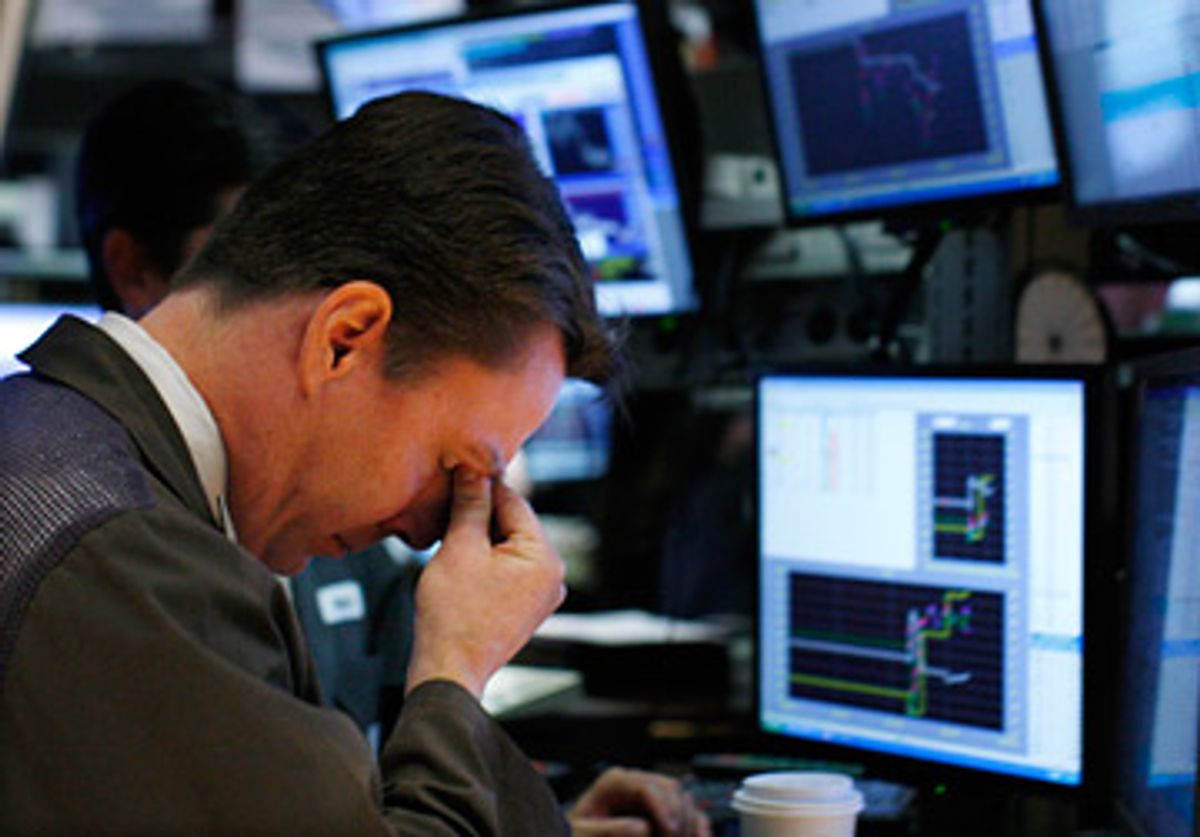 A trader works on the floor of the New York Stock Exchange October 6, 2008. U.S. stocks slid at the open on Monday as widening fallout from the credit crisis fueled concerns about the economy and the profit outlook.

Any time the Dow Jones Industrial Average drops 500 points is a good time to talk about the fearsome financial crises of yesteryear. As I write these words, the Dow is down 743 points, spooked by global economic turmoil. We don't know what the afternoon or the rest of the week or the rest of the year will bring, but it is safe to say at this moment that the passage of the bailout vote was, in and of itself, no magic bullet.

So while we wait and watch, let's look back. Way, way back. In September 1873, a great financial panic swept across Wall Street. The New York Stock Exchange closed for 10 days. Thousands of companies closed, including 57 Wall Street trading firms. Eighty-nine railroad companies went bankrupt. The chaos launched an era known as the "Long Depression," during which unemployment hit 14 percent and real estate values tanked.

The explicit reasons for the 1873 panic aren't worth delving into right now (although, hint: Excessive speculation in risky securities played a key role). But historian Ron Chernow, in his magisterial account of the birth of modern finance, "The House of Morgan," cites an interesting quote from financial journalist Alexander Dana Noyes that provides some perspective.

"To my parents and to the outside world, the financial crash of September 1873 had been as memorable a landmark as, to the community of half a century later, was the panic of October 1929."

We don't hear much about the financial panic of 1873 and the Long Depression these days, largely because the Great Depression reset our cultural memory. All previous panics and crises vanished from the conversation, as if erased from the whiteboard. The relative economic stability of the post-WWII U.S. economy offered support for the argument that the chronic crises of the late 19th and early 20th centuries could be safely forgotten -- and not just by Joe and Jane Six-Pack, as a certain vice-presidential candidate might say. A timely essay by David Warsh, economics reporter extraordinaire, asked the interesting question this morning of why it is that "the leading introductory economics texts scarcely mention the cycles of manias, panics and crashes that have been a familiar feature of global capitalism since its emergence in the seventeenth century?"

The next version of those textbooks will probably include some interesting revisions, although at this juncture we have little idea how far this current crisis will go. We don't know whether the Great Depression is about to be replaced by the Great Credit Freeze as the financial disaster touchstone for a new generation. But there is no doubt that we are going through a tremendous reassessment of how government and Wall Street intersect -- a reassessment that should remind us that one of the great lessons of capitalism is that without strong oversight and strict rules, greed will inexorably lead markets astray.

As I write these words, Henry Waxman, D.-Calif., is holding a congressional hearing investigating the collapse of Lehman Brothers. There is much grandstanding and anger on both sides. Dennis Kucinich, D-Ohio, is asking pointed questions about how Goldman Sachs, Treasury Secretary Henry Paulson's former firm, stood to benefit from the collapse of Lehman. Republicans, waving copies of the New York Times Sunday article on the role played by Fannie Mae in the current crisis, are pushing their last line of free-market defense: that government caused the bust by pushing Fannie and Freddie to make more risky loans.

But, to my mind, the most telling moment in the New York Times article comes in its depiction of how the private sector pressured Fannie. Angelo Mozilo, the former CEO of Countrywide, takes a star turn:

For example, Wall Street had recently jumped into the market for risky mortgages. Firms like Bear Stearns, Lehman Brothers and Goldman Sachs had started bundling home loans and selling them to investors -- bypassing Fannie and dealing with Countrywide directly.

"You're becoming irrelevant," Mr. Mozilo told [Fannie CEO] Mr. Mudd, according to two people with knowledge of the meeting who requested anonymity because the talks were confidential. In the previous year, Fannie had already lost 56 percent of its loan-reselling business to Wall Street and other competitors.

"You need us more than we need you," Mr. Mozilo said, "and if you don't take these loans, you'll find you can lose much more."

No matter how much the Republicans attempt to dub the current turmoil the Fannie Mae Financial Panic of 2008, they will have great difficulty in obscuring the fact that Wall Street investment banks and hedge funds were the prime players who loaded up on risk that could not be sustained and that put not only their own companies but the entire global economy in peril. Fannie and Freddie are a piece of that puzzle, but so are unregulated credit derivatives, absurd levels of leverage, failures by rating agencies, and a culture that had, quite simply, forgotten that for most of modern capitalism, crises have been the rule, not the exception.