The increasingly petty and ugly attacks on Barack Obama by a desperate, dying movement are a microcosm of the last eight years.

In the last two months of this election -- as the Bush administration winds down as the most unpopular in modern American history and the Right is on the verge of a desperately-needed collective death -- we see a perfect microcosm of what our country has been over the last eight years. The financial crisis is spreading, accelerating, and morphing across the globe in unpredictable ways. The economic anxiety levels are as high as one can recall, teetering on panic, and even the Wall St. Journal Editorial Page is acknowledging that America's days of economic dominance are over. The national debt is over a staggering $10 trillion and has doubled in the last 8 years alone. And the symbols of our nation have become gulags, the waterboard, an endless stream of bombs and occupations, and people imprisoned forever with no charges of any kind.

And as these flames engulf America's foundations, what is the Right doing -- the movement that brought us all of this through their virtually absolute control of our Government for the last eight years? They're spending all their time chattering with each other about an aging 1960s radical and giddily cheering the increasingly repellent Sarah Palin as she skips around the country in front of rambunctiously booing right-wing crowds accusing Barack Obama of palling around with The Terrorists and pointing out that he doesn't see America the way all the Normal, Good Americans do. For the last eight years, the opponents of the Right have been America-hating Terrorists and they still are.

And just now, John McCain -- speaking in New Mexico -- delivered one of the ugliest, nastiest, most invective-filled personality attacks a major candidate has ever delivered, blatantly designed to stoke raw racial resentments and depict Obama as a Manchurian candidate funded by secret Arab Terrorist sources -- a truly unstable and hate-mongering rant filled with lines like these, delivered with an angry scowl to screaming, howling, booing throngs, while Cindy McCain stood behind him shaking her head in disgust at each fact she heard about the Black Terrorist daring to challenge her husband:


I don't need any lessons in being honest with the American people, and if I did, I wouldn't seek it from a Chicago politician. . . . There's much we don't know about Senator Obama. For a guy who has authored two memoirs, he's not exactly an open book. Who is the real Barack Obama?

It's as if somehow the usual rules don't apply, and where other candidates have to explain themselves and their records, Senator Obama seems to think he is above all that . . . His campaign had to return $33,000 in illegal foreign funds from Palestinian donors, and this weekend, we found out about another $28,000 in illegal donations. Why has Senator Obama refused to disclose the people who are funding his campaign? Again, the American people deserve answers.

I wonder what it is about Obama that allows "the usual rules not to apply" to him? McCain also repeatedly claimed that the fault of the financial crisis lies with Democrats who (despite controlling no branches of Government) forced banks to give mortgages to poor people who couldn't afford them (which, as we've seen, means minorities) and that Obama "aided and abetted" these practices. What are typically Rovian attack themes disseminated underneath the surface are being unleashed in their naked, unhidden form. As Marc Ambinder just put it with real understatement: "Sen. Barack Obama is, Sen. McCain said in New Mexico just now, a mystery, a liar, complicit in the economic crisis and an unaccomplished naïf, at all the same time."

There are 30 days to go before this election is over. What we're seeing explode in front of us are both the devastating fruits of eight years of unchallenged right-wing rule under the Bush/Cheney administration and the tactics of a desperate, dying, rotted movement descending further and further into the sewer in order to cling to power. The more they unmask themselves this way, the more smashing will be their defeat, the longer their banishment will be.

UPDATE: Here (.pdf) is a newspaper column from Bobby May, the McCain campaign chair in Buchanan County, Virginia and correspondence secretary for the Buchanan County Republican Party, warning that "the platform of Barack Hussein Obama" includes:

Reparations to Black Community: Opposes before Election Day and supports after Election Day;

The White House: Hire rapper Ludacris to "paint it black."

The GOP-favored Rasmussen Reports today reported that Obama is leading 52-44% -- "the highest level of support ever recorded for Obama and is his largest lead of the year." So this is all just the beginning. The Bush administration is ending with the appropriate results for the country quite visible at exactly the same time that the truly desperate Right is exposing their true face for all to see. That's why these last couple of months are a perfect microcosm -- a museum exhibit -- for everything that has happened to the U.S. since 2001.

UPDATE II: The new CNN "poll of polls" out today, taken after the Biden-Palin debate, found:


(1) Barack Obama is widening his lead over John McCain in the race for the White House. . . .That 8-point lead is double the 4-point lead Obama held in the last CNN/Opinion Research Corporation poll, taken in mid-September.

(2) President George Bush may be part of the reason why Obama's making gains. Only 24 percent of those polled approve of Bush's job as president, an all-time low for a CNN survey. . . .

"Bush has now tied Richard Nixon's worst rating ever, taken in a poll just before he resigned in 1975, and is only 2 points higher than the worst presidential approval rating in history, Harry Truman's 22 percent mark in February 1952," says CNN Polling Director Keating Holland.

(3) A drop in the public's perception of McCain's running mate . . . More Americans appear to have an unfavorable view of Gov. Sarah Palin, and that may also be helping Obama in the fight for the presidency. Forty percent now have an unfavorable view of Palin, up from 27 percent a month ago and from 21 percent in late August, when McCain surprised many people by picking the first-term Alaska governor as his running mate.

"A majority of Americans now believe that Sarah Palin would be unqualified to serve as president if it became necessary, and her unfavorable rating has doubled," Holland said.

This is a dying, desperate movement -- so deeply out-of-touch with the country that they actually proclaimed that Sarah Palin would save them in the wake of the debate, only to watch her continue to drag down their ticket. Polls now even show Obama with large leads in traditional red states like Virginia (10-12 points) and North Carolina (6 points). Watch McCain's speech today and you will see only one thing: the behavior of cornered rats.

UPDATE III: Here's a small excerpt from McCain's speech that conveys just a tiny sliver of the flavor. Note that after McCain asks: "Who is the real Barack Obama?," you hear "Terrorist!" from the crowd:

UPDATE IV: Pew Research has a new poll on the Vice Presidential candidates. Look at how voters, after the debate, perceive of Sarah Palin -- the Plain-spoken Insurgent-Superstar who all Regular, Normal Americans would love and support just like Ronald Reagan: 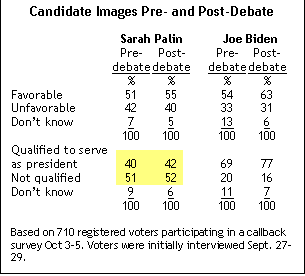 The perception that she's unqualified actually increased slightly after the debate; Biden beats her by a humiliating 35 points on that question (77-42%). Having someone who most Americans believe isn't even basically qualified for the job running around sneeringly calling Barack Obama an American-hating Terrorist doesn't seem like a good strategy, even in desperation. I've long thought, in light of the obvious obstacles he faced this year, that McCain was being smart by running an unconventional, risky campaign -- including (perhaps especially) choosing Palin. But the behavior of the last couple of weeks isn't unconventional; it's unstable, and increasingly quite ugly, even by the standards of GOP campaigning tactics.

UPDATE V: Read this account from The Washington Post's Dana Milbank about Sarah Palin's speech today in Central Florida. They should just get it over with and move her rallies into Munich beer halls.

Both McCain and Palin's speeches today were quite redolent of the notorious 1992 Rudy Giuliani speech, where he riled up drunken police officers against the African-American Mayor David Dinkins, described this way by The New York Times:

"If you're acculturated to like cops, you don’t necessarily see 10,000 white guys who don’t vote in the city, don’t write political checks and love you for the wrong reason,” an aide said. He spoke on condition of anonymity because he is working with the Giuliani presidential campaign.

Mr. Dinkins has not forgotten that sea of angry cops. "Rudy was out there inciting white cops to riot," Mr. Dinkins said in a recent interview.

But what is merely raucous, untoward and vile when done in a municipal election becomes downright dangerous when extrapolated to a national level, particularly in a time of severe economic crisis, as an increasingly desperate McCain and Palin are doing.