In Wisconsin's blue-collar Paper Valley, the Democrats are banking on an outpouring of volunteers while the Republicans are left with fear itself. 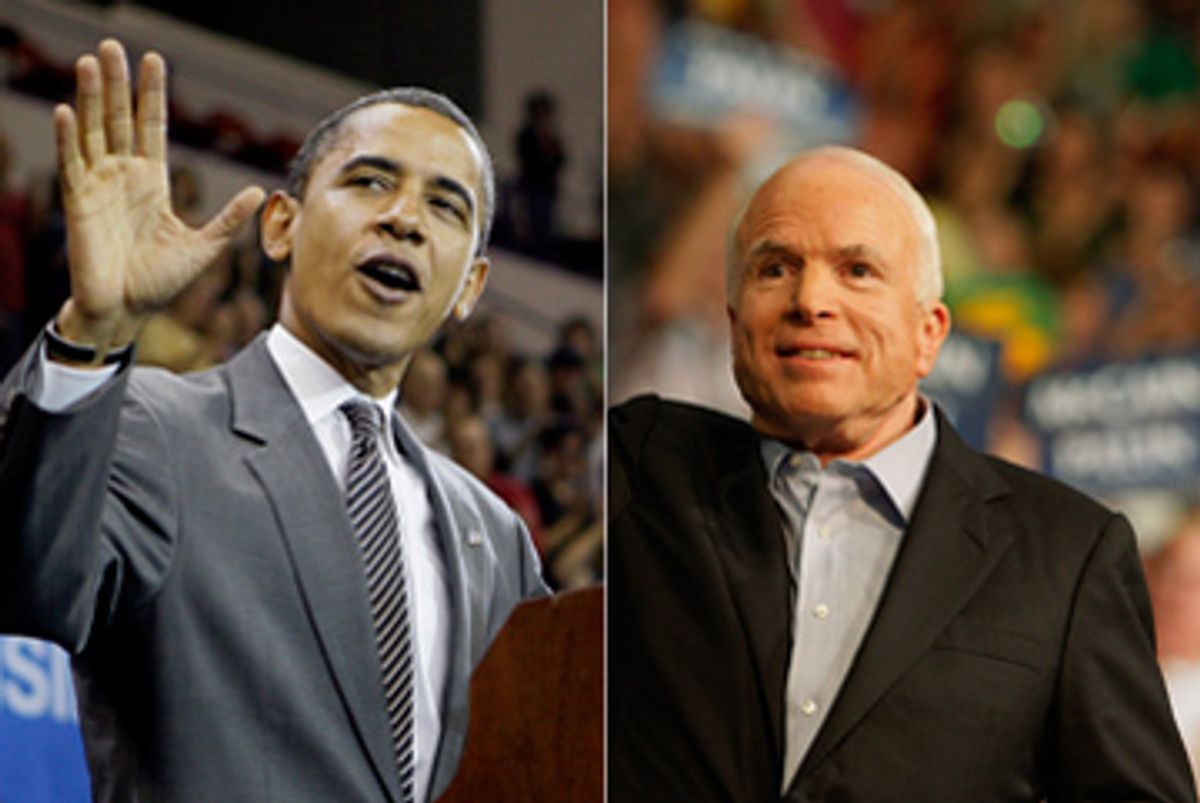 Mid-morning Saturday, the Republican headquarters here in the fiercely contested northeast corner of Wisconsin reflected the somnolent air of the half-empty indoor mall in which it was located. A few Republican stalwarts wandered by to pick up McCain-Palin lawn signs and other GOP campaign paraphernalia. A signboard on the wall announced the target of "878 Doors" on which to knock, but it was evident that most of the canvassing -- the lifeblood of grass-roots organizing and get-out-the-vote drives -- would be done by pairs of high-school students too young to vote.

Two hours later, in contrast, the pulse rate was racing at the local Democratic headquarters as more than 70 political foot soldiers (most of them middle-aged) readied themselves for an afternoon of canvassing, phone calling and scrawling vote-for-Obama postcards to neighbors. On the sidewalk of the down-at-the-heels strip mall, Obama volunteers grilled lunchtime hamburgers and hot dogs as if this were an alcohol-free Packer tailgate party outside of Lambeau Field.

Sometimes in politics, the obvious can be more telling than the subtle. For all the glib talk about how Sarah Palin has energized the conservative base, it is hard to find evidence that the Republicans have papered over their enthusiasm gap here in Paper Valley, a moniker designating the dominant local industry in the Green Bay-Appleton area. "Our volunteer base is getting older and we're trying to turn that around, but it's not easy," concedes Tom Van Drasek, the Republican chairman of Brown County, of which Green Bay is the county seat. "McCain got started late here on the ground -- and we're struggling to catch up."

With the McCain campaign retreating from Michigan into Wisconsin (a state that John Kerry won by a paltry 11,000 votes in 2004), the Paper Valley is scorched-earth political terrain. According to the latest media-monitoring measurement by the University of Wisconsin Advertising Project, the Green Bay area was sixth in the nation in terms of the number of TV spots aired during the second week in September, even though it is the 69th largest media market in the country. John McCain and Barack Obama held Green Bay rallies four days apart in mid-September. As Mark Graul, a Republican strategist who ran the 2004 Bush campaign in Wisconsin, puts it, "John McCain has to win this congressional district [the 8th] by 10 points in order to win the state." (In 2004, George W. Bush defeated Kerry by 11 points in the heavily Catholic 8th; two-thirds of the district's electorate lives in the Green Bay-Appleton area).

Dan Kanninen, the Obama campaign's Wisconsin coordinator, underscored the importance of the Democrats' organizational edge in a state where Obama swamped Hillary Clinton by a 17-percentage-point margin in the mid-February primary. "The 2004 election," he said, "was a base-versus-base election, where they turned out their base and we turned out ours. But this campaign -- and we certainly still consider our base to be important -- is more about persuasion, and that's where our neighbor-to-neighbor advantage comes in."

But if there is a worrisome sign for Obama, it is personified by undecided voters like Matt Dallaire, a 34-year-old bus driver and part-time technical-school student who lives in Allouez, just south of Green Bay. I met Dallaire at his front door Saturday morning when he was visited by two earnest Preble High School students (17-year-old Zach Howard and Geri Sundstrom, 16) canvassing for McCain.

Dallaire explained that he was attracted by McCain's "values" but repelled by the Republican nominee's support of "amnesty" for illegal aliens. Dallaire, who is worried about the Wall Street whirlpool, also said without prompting, "I think Obama would clearly be better for the economy right now." So, I asked, if you are concerned about McCain's views on immigration and tilting toward Obama on the economy, why do you still consider yourself an undecided voter? "I get a lot of e-mails saying bad stuff about Obama," answered Dallaire, as he shook his head at the memory of some of the poison-pen charges, which he declined to specify. "It's crazy stuff. And it's all probably BS. But it makes me think twice."

McCain's hopes in Wisconsin (where he has trailed in every published statewide poll since the primaries) depend on think-twice voters like Dallaire. The underlying problem is not just race, although that is obviously a factor. Rather, it is all the cultural symbols that Palin was evoking when she sneered about Obama in Colorado this weekend, "This is not a man who sees America as you and I do." Graul, who is not associated with the McCain campaign, said, "Obama won the primary against Hillary based on personality. But that was before people started hearing things about Barack Obama. Small things. [Antoin] Rezko, Obama voting 'present' on tough votes in Illinois, his pastor. For the first time in Wisconsin, people are saying, 'Wait a minute' about Obama."

Even though most Wisconsin polls show the "undecided" vote in single digits, my strong (though anecdotal) impression is that such numbers understate the uncertainty lurking among the voters. Canvassing in Suamico, north of Green Bay, with Curt Andersen, a 62-year-old Obama supporter, we spoke with a barefoot woman in her 30s, who stood at the front door simultaneously trying to control her chocolate-brown Labrador and her young son. When Andersen asked whom she was supporting for president, she replied, "I honestly don't know." Then when I pressed for more detail, a look of pure agony crossed her face as she wailed, "I don't know and I can't verbalize it."

Democratic Rep. Steve Kagen, who won an upset victory in the traditionally Republican 8th District in 2006, expresses confidence that economic self-interest will trump the fear factor: "People can see through the distortions about Obama that will be raised -- whether it's race or whatever else will come next." But, at a point when the McCain campaign has signaled that things are about to get ugly, it may be naive to dismiss Republican efforts to accentuate the negative.

Over breakfast Saturday morning at Hoho's Cafe ("Old Fashioned Goodness") in the Democratic-leaning mill town of Kaukauna, 25-year-old Dan Rademaker offered the textbook, vote-your-wallet argument for Obama: "The reason that I don't care for McCain is that he is for the big companies -- not the little guy." But Rademaker, who is an electronics technician, admitted that he is a rarity among his 20-something friends because he intends to vote. But then, as he carefully drizzled a poached egg onto his toast with the precision of a surgeon prepping for an operation, Rademaker talked about his lone politically interested friend: "He's a liberal. But I don't know how racist he is. And that's a big part of it, though."

The Paper Valley is an area where economic discontent was bubbling to the surface long before the tidal wave hit the financial markets. Over the last decade, roughly one-third of the papermaking jobs in Wisconsin have vanished -- unionized jobs paying $60,000 a year, enough to afford a vacation cottage on a lake and a Harley. But few paper plant shutdowns have caused more shock and distress than this summer's closure of the Kimberly Mill in Kimberly, a town named after one of the founders of Kimberly-Clark and synonymous with papermaking for 120 years. The Kimberly Mill (owned by the NewPage Corp., a subsidiary of Cerberus Capital Management), which made glossy paper stock used in magazines, was a modern, seemingly profitable plant, which was shut down after the International Trade Commission (ITC) in Washington ruled that China was not illegally subsidizing below-cost paper imports.

The 600 out-of-work Kimberly employees, most of whom were represented by the Steelworkers, have become a potent political symbol in this corner of the state. "If Obama wins Wisconsin -- and I believe he will win -- it will be largely because of the fight that the millworkers are waging and the attention it gives to unfair trade laws," says Democratic state Rep. Tom Nelson from Kaukauna. That may be hyperbolic, but the Obama campaign has embraced the cause of the Kimberly workers. Andy Nirschl, the local union president, introduced Obama at a Labor Day rally in Milwaukee, and the Democratic nominee pointedly referred to the Kimberly Mill in his opening remarks in Green Bay three weeks later.

At the union hall across the street from the closed Kimberly Mill, Nirschl walked me to the window, pointed to what had been his workplace for 28 years and said, "Take a look at it. Does it look to you like it should be shut up? The No. 6 and No. 7 machines are the fastest in the U.S." Referring to a planned effort next year to reverse the ITC decision, Nirschl said, "If Obama doesn't win, I'll say the mill isn't going to open again. And if Obama wins, I'm pretty optimistic."

The contest in the Paper Valley and the other blue-collar battlegrounds of the Midwest is fast coming down to primal emotions like hope and fear, enthusiasm and apathy. Something major seems to be stirring when the Obama campaign can put a battalion on the streets of Brown County and the McCain forces have to counter with a ragtag platoon of high-school students. (Zach Howard, one of the McCain canvassers, did say with youthful idealism in his voice, "If I can change one vote, it's the same as voting myself.") But fear is a quality that should never be underestimated in politics -- whether it is an ill-defined unease about Obama or the anxiety triggered by the thought of four more years of Republican stewardship of the economy.