A debate for sobering times

With the economy nose-diving, McCain did not achieve the surge he needed, while Obama looked masterly as the candidate of reassurance. 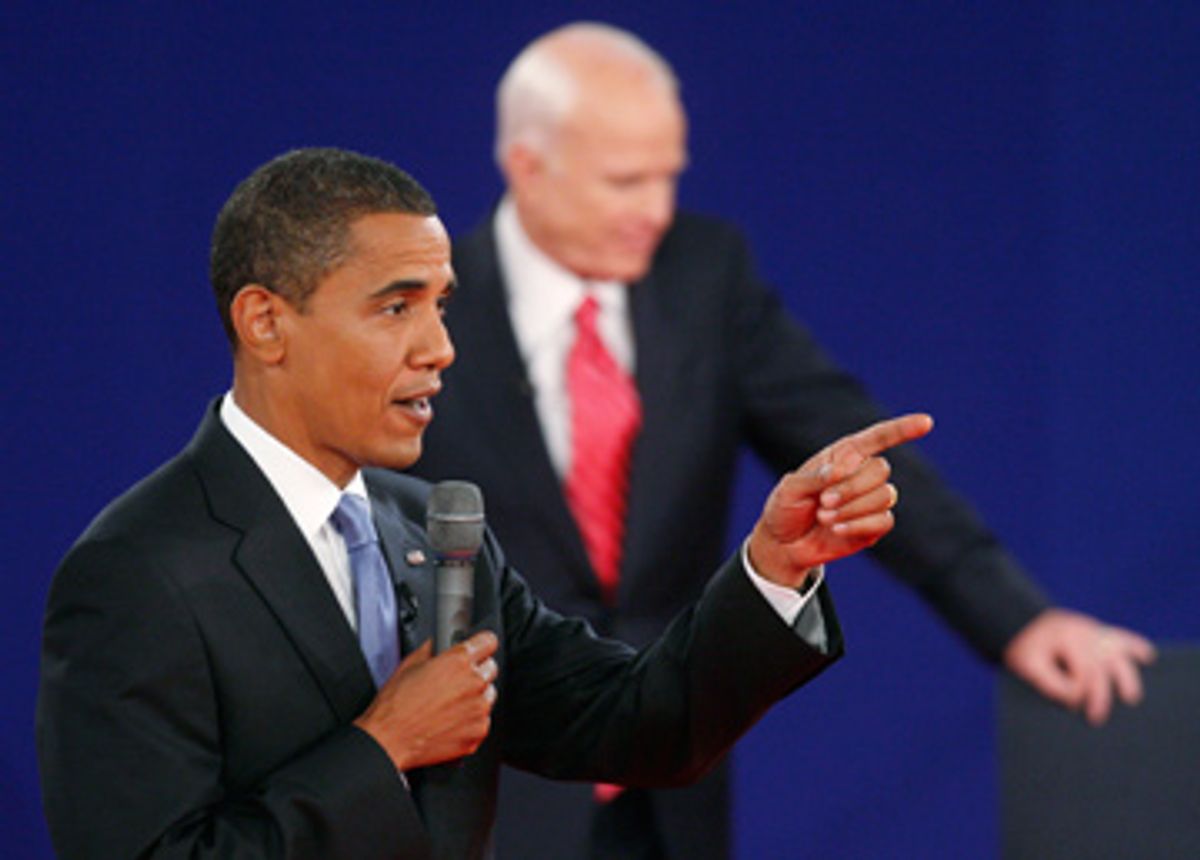 It was more ramble than rumble on the red rug as John McCain and Barack Obama met for their second debate on a day when the stock market continued its plunge down a seemingly bottomless pit. Maybe it was the stilted format of an ersatz town hall, maybe it was the gravity of the economic crisis, maybe it was the fuzziness of many of the audience questions, but the result was a surprisingly civil debate devoid of the gotcha moments and zingers likely to be immortalized in the YouTube hall of fame.

Never before in the 48-year history of presidential debates has a candidate begun his substantive remarks, as Obama did, by starkly declaring, "I think everybody knows now we are in the worst financial crisis since the Great Depression." Yet as a first-term senator -- a candidate whose meteoric rise has been fueled by his opposition to the Iraq war, his charisma and his life story -- Obama did a masterly job of coming across as the candidate of economic reassurance.

McCain came across as solid and competent (though his incessant talk of "earmarks" was enough to prompt viewers to reach for their earmuffs). But with four weeks left before the election and with his poll numbers collapsing along with the Dow Jones Average, McCain needed a debate performance that would support a domestic surge in his fading electoral prospects. Such a stirring comeback was not on the calendar for Tuesday night -- and now McCain has to gamble on a breakthrough when the two candidates meet for the final time at Hofstra University on Oct. 15.

To the credit of both candidates, no time was wasted on phony issues like Obama's arm's-length association with 1960s radical bomb-maker Bill Ayers or McCain's long-ago entanglement in the Keating Five scandal. Instead, there was a welcome gravity to the debate that was reflected by McCain declaring in answer to a question, "Americans are angry, they're upset and they're a little fearful." Minutes later, Obama told another undecided voter in the audience, "I understand your frustration and your cynicism."

Bill Clinton -- who overwhelmed George H.W. Bush in the first town-meeting debate in 1992 -- was the unquestioned master at feeling (or feigning) the pain of an individual voter. But Obama and McCain had the much more difficult challenge of feeling the pain of an entire economy. In one of his strongest moments -- even though it was unlikely to make the morning-after highlight reels -- Obama explained the credit crunch in a way that even the most economically unsophisticated voter could understand:

"The credit markets are frozen up and what that means ... is that small businesses and some large business just can’t get loans. If they can't get a loan, that means that they can't make payroll ... If you imagine just one company trying to deal with that, now imagine a million companies all across the country."

Looking at the debate purely in political terms obscures the reality that much of what both candidates are saying about the economy is only tangentially connected to the worldwide financial crisis. Middle-class tax cuts, Obama's favorite balm, would not lift America out of a deep recession or do much to restore retirement accounts devastated by the stock-market dive. McCain was even further off the mark with his proposal for an "across-the-board freeze" on government spending -- defense, of course, excluded. McCain's green-eyeshade approach to economic calamity suggests that he lives in an alternative universe where the economic-stimulus lessons of John Maynard Keynes have never been demonstrated.

Both McCain and Obama seemed almost relieved when moderator Tom Brokaw began to call on audience members in Nashville who had been primed with foreign-policy questions. There was something familiar and comforting in returning to the practice-perfect arguments over the Iraq war, with McCain claiming yet again that "Sen. Obama would have brought our troops home in defeat." Obama -- in a passage that clearly had been honed in debate-prep sessions -- went after his Republican rival by saying with mock puzzlement in his voice, "I don't understand how we ended up invading a country that had nothing to do with 9/11, while Osama bin Laden and al-Qaida are setting up base camps and safe havens to train terrorists to attack us. That was Sen. McCain's judgment and it was the wrong judgment."

Every debate wrap-up story should come with a warning label that reads something like this: "Public opinion takes time to harden, which is why instantaneous dial reactions of focus groups and snap polls regarding who won can be misleading. Television pundits often have no better handle than, say, Uncle Morty from Cincinnati about whether votes were swayed by a debate. So treat all morning-after verdicts with healthy skepticism."

Still, the suspicion here is that Tuesday night in Nashville will be remembered mostly as the neglected middle child of the 2008 debate family. It was neither the first time that McCain and Obama faced off (though it was the first time that the 72-year-old Arizona senator looked directly at his younger rival), nor will it be the last. As hard as it may have been for both Sarah Palin's ardent fans and acid foes to accept, this was a debate that had nothing to do with Alaska, lipstick on pigs, a purported media conspiracy or the questionable moral superiority of small-town life.

At a time when the world economy is teetering on the brink of the abyss, both Obama and McCain rose to the occasion with a serious -- if sometimes ill-focused -- debate that reflected the enormity of the crisis. Obama got it right early in the evening when he flickered away a McCain critique by saying to an audience member, "You're not interested in hearing politicians pointing fingers." What is difficult to determine is how swing voters will react in going from watching this sober Nashville town meeting to being subjected to the impossible-to-justify exaggerations and distortions of the campaign ads on TV. Maybe, just maybe, yet another frightening drop in the Dow will have proven enough to raise the tenor of what was fast becoming a down-and-dirty campaign.