Is Google the Mr. Spock of the Internet -- all head, no heart? A new book wonders if the very things that made the company great will bring it down. 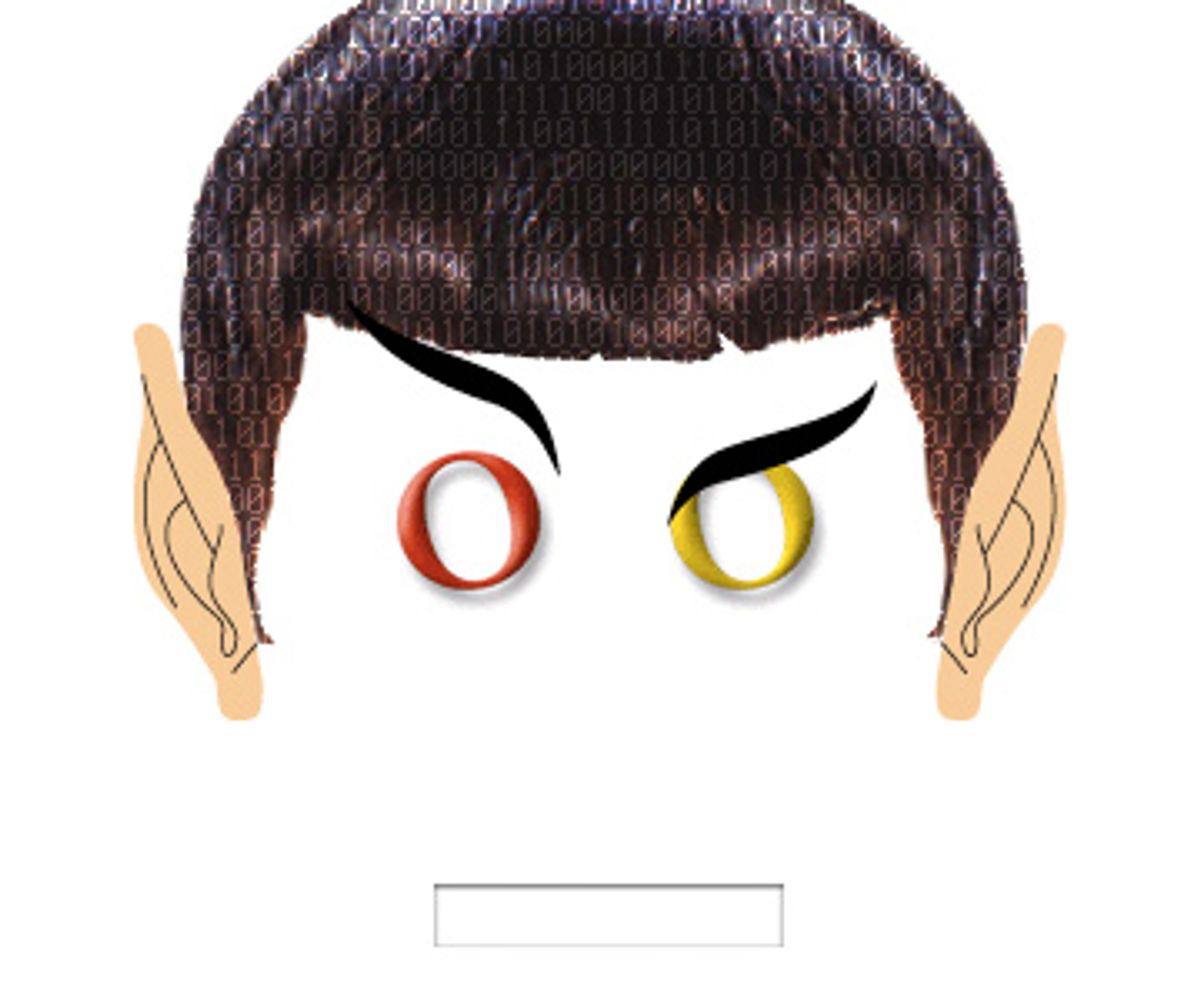 Google's reliable presence is woven so tightly into our daily experience of the Web that its infrequent failures feel like seismic events. What? Some Google service doesn't respond? Has there been a rupture in the space-time continuum?

Thankfully, Google downtimes are brief, and so rare that bloggers take screen-captures of the events and post them like souvenirs. But when they do happen, they offer us brief flashbacks to something that now seems unthinkable -- a Google-less Web.

In fact, of course, we lived for years online without any Google at all. In 1998 Google was actually a latecomer, an upstart on a Web that had already grown crowded with services that promised to guide you through the online jungle. Conventional wisdom had it that Web search had fully evolved: The technology was as advanced as it could be; the market was boring and mature; opportunity lay elsewhere. Hah!

I first stumbled on Google almost exactly a decade ago, in autumn of 1998, and it changed my work life. I itched to tell my readers what I'd found: Google was fast. It gave better search results than any of its better-established competition. But, most important of all, it was -- as T.E. Lawrence says of the desert in "Lawrence of Arabia" -- clean. Its Zen-like starting page, then as now, consisted of little more than an empty search box. Stratospheric dot-com bubble market valuations had pushed a multitude of "portals" to overload their home pages with theoretically cash-generating distractions; in such an environment, Google's willingness to stay focused was both a relief and a revelation.

Google's ascent ever since has been breathtaking -- first as a delightfully usable tool for everyday Web users, then as a money machine profiting from an effective new model of unobtrusive online advertising, and finally today as a dominant industry force promoting a new computing paradigm centered on the Web rather than the desktop personal computer.

Google has covered a lot of ground in a decade. But the company's ambition, as encapsulated in its famous mission statement, reaches way farther. Google's goal -- "to organize the world's information and make it universally accessible and useful" -- has taken it far afield from the simple search box, into e-mail and word processing services, video sharing and book scanning, global satellite imaging and social networking software.

The story of these efforts, Google's early stabs at making good on its lofty mission, is the focus of Randall Stross' new "Planet Google: One Company's Audacious Plan to Organize Everything We Know."

Stross, author of books about Microsoft and the venture capital business and a columnist for the Sunday New York Times business section, wisely avoids retreading too much of the basic Google saga already well chronicled by John Battelle in "The Search" (and likely to be covered again by the estimable Steven Levy in his next book, too). Instead, Stross fills in the blank spots on our map of Google's story, assembling a panorama of the company's fitful struggle to expand its search franchise into other realms.

These turn out, surprisingly, to be more haphazard and opportunistic than calculated and planned. Google is, famously, a company built by computer scientists and engineers who value precision and good data. The search engine itself operates largely untouched by direct human intervention; coders tune the algorithm but don't mess with the results. The "algorithms uber alles" approach turned out to be ideal both for Web search and for the text-ad business Google built on top of search. But as the company began moving farther out into the world beyond the server farm, it often found itself stymied by messy human considerations beyond most algorithms' grasp.

Stross provides particularly vivid accounts of several Google train wrecks. There was its troubled foray into digitizing books by the library-ful, which ran headlong into publishing industry fears about losing control of copyrighted assets. Its misbegotten plan to build a Web video service focused on carefully vetted professional content failed spectacularly, leading to the company's $1.65 billion acquisition of YouTube in 2006. Then there was the difficulty Google faced in persuading users of its Gmail service that machine-scanning their e-mail messages in order to display relevant advertisements didn't constitute snooping on their personal correspondence.

In each of these stories, Stross presents a different Google from the one we think we know. As a search provider, Google is confident, competent and a master of "scale" -- the ability to keep its results flowing speedily and accurately even as demand skyrockets. But as the company tries to branch out, it miscalculates, makes beginner's mistakes, and fumbles seemingly obvious maneuvers -- like, if you're planning to digitize the contents of the world's books, perhaps some conversations with the companies that publish them might be in order?

"Planet Google" further reinforces the picture we now have of Google as the Mr. Spock of Internet companies: intellectually supreme, agile and engaged with the world, but prone to respond to the unpredictable behavior of its customers by cocking an eyebrow and exclaiming, "Highly irrational!"

Is there a Bones McCoy anywhere in the company who can provide a humanist counterweight to all that calculation? Maybe -- but you're not likely to learn who it is from Stross' research. "Planet Google" is solid and informative, and Stross, refreshingly, avoids the frothier sort of Google hype sometimes heard from the tech-punditry choir. But the book is hardly the insider's-eye view of Google that it has been painted to be.

Doubtless it's unfair to any author to quarrel with the book-jacket copy, but if your publisher is going to claim you had "unprecedented access to the highly secretive Googlepex" then you are on the hook to deliver. Alas, aside from a brief visit to one Friday all-hands meeting at Google's Mountain View, Calif., headquarters, there's nothing unprecedented at all about the inside reporting in "Planet Google." And as far as I can tell, unlike his predecessor Battelle, Stross didn't land any interviews at all with Google's two young founders, Larry Page and Sergey Brin, who retain substantial control of the company's fate.

Still, if you're trying to puzzle out that fate, "Planet Google" provides some helpful clues. Stross has a good long view of tech-industry history, and he accurately puts Google in its place as the current decade's dominant innovator. Today, Google has displaced Microsoft, just as Microsoft displaced IBM. But can Google expand its power beyond search and search-based advertising? Its predecessors achieved similar feats and staved off their decline: IBM extended its industry-shaping power for several years with its original IBM PC, only to see that victory plant the seeds for Microsoft's eventual triumph. Similarly, Microsoft didn't miss the rise of the Web; it trounced Netscape and held onto its top-of-the-industry-heap spot for much of the following decade.

What is tripping up Microsoft today? Certainly, its own ungainly size and the decrepitude of its flagship products have both played roles. But most of all, it has been the company's inflexible dedication to its founding vision of "a computer on every desktop" -- even in the face of mounting evidence that the computer itself is becoming less important to people than their connection to the network.

Similarly, if Google is going to falter over the coming decade, it is likely to be the result of avidly pursuing its "organize the world's information" goal even as the evidence mounts that its Spock-like principles and engineering-first culture may not get the company to its destination. Stross' account provides several case studies -- including accounts of the oddly neglected Orkut social networking site and the ill-fated Google Answers service -- in which innovative Google ventures foundered because of the company's clumsiness at managing human interaction.

Google, an upstart itself so recently, already faces an infant challenger biting at its heels. Facebook's success has led some Silicon Valley watchers to anoint it -- almost certainly prematurely -- as "the new Google." However Facebook fares, any successful challenger to Google is likely to take similar aim at the company's greatest weak spot. Google is brilliant at organizing information and managing data; but people are now beginning to rely on the Internet to organize relationships and manage lives. In those pursuits, Google has not yet won our trust -- it has not proven it has an appropriate mastery of the subtleties of how we human beings relate to one another. Neither, of course, has Facebook or anyone else.

Among Google's geekiest admirers there's been a long-standing argument that the company's technology platform -- now spread across multiple sprawling data centers on innumerable generic server boxes all sharing the same software soul -- represents one vast supercomputer. As this big brain steadily schools itself on the biggest pool of data humankind has yet generated, these dreamers imagine, it could evolve into that icon of countless science-fiction sagas, a planetwide artificial intelligence. The scientist George Dyson, in a celebrated 2005 piece based on a visit to the Googleplex, chronicled an instance of this attitude inside the company itself:

The mood was playful, yet there was a palpable reverence in the air. "We are not scanning all those books to be read by people," explained one of my hosts after my talk. "We are scanning them to be read by an AI."

I always relegated this notion to the category of "fun thoughts that have no bearing on reality." But Stross cites an interview in which Google CEO Eric Schmidt gets a bit AI-ish himself:

Asked how Google might look in five years' time, Mr Schmidt said: "We are very early in the total information we have within Google. The algorithms will get better and we will get better at personalisation. The goal is to enable Google users to be able to ask questions such as 'What shall I do tomorrow?' and 'What job shall I take?'"

It's hard to tell whether this goal represents technical ambition, chutzpah or hubris -- maybe all of the above. In any case, surely there are some questions that, properly, should never be offloaded to any machine -- even one as impressive as Google's. My hunch is that most people faced with questions like the ones Schmidt cites might welcome helpful suggestions from Google but would prefer to come up with the answer themselves.

If Google's leaders believe otherwise, that might make them daring visionaries. Or it might mean they're just a bit out of touch with humanity.