Going for broke in Pennsylvania

McCain is redoubling efforts against Obama in this key electoral battleground, where the Philly factor could be decisive. 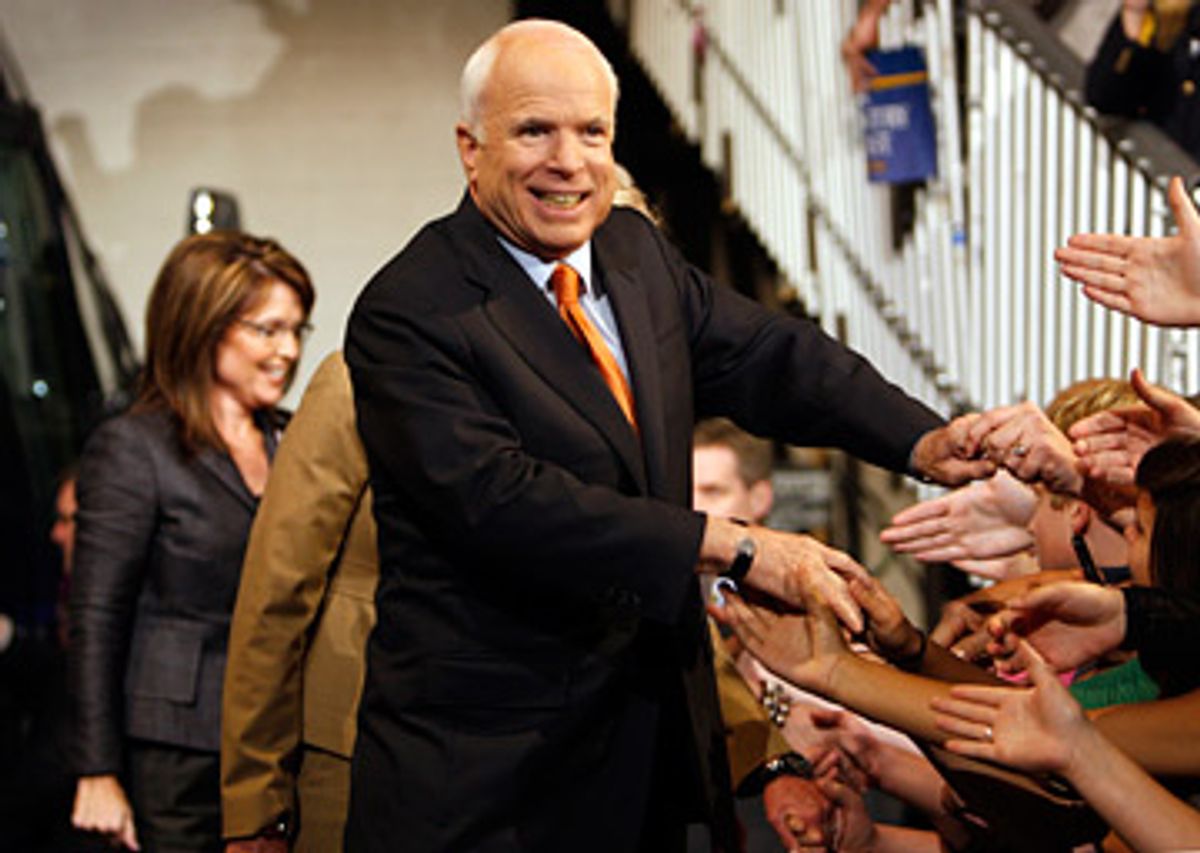 When John McCain effectively ended campaigning in Michigan last week, he assured nervous Republicans that he was still trying to play offense where he could. Pennsylvania, which John Kerry barely won four years ago, was suddenly one of McCain's top swing-state targets. If he could grab its 21 electoral votes, McCain might well leave Barack Obama scrambling to find the 270 votes needed to become the next president. After all, Hillary Clinton had stomped Obama in the Democratic primary here; if McCain's maverick shtick could help him steal away any big industrial state, this might be it. The campaign  shuttled Michigan staff to Pennsylvania and began focusing on the white working-class Democrats who flocked to Clinton in April.

But McCain's choice for a last stand is starting to look as though it might not work out much better than Custer's. Recent polls show the state slipping away from McCain -- even in the "bitter" parts of the state where Clinton racked up her biggest margins six months ago. And Obama is outspending McCain on TV here, having dropped $2.2 million on ads last week, while McCain spent $1.6 million. McCain visited Bethlehem, Pa., Wednesday, with Sarah Palin. But even if he can narrow the gap with Obama, which is widening with the worsening economy, increasingly optimistic Democrats say McCain will run into fatal problems in Philadelphia.

The way Democrats typically win statewide elections in Pennsylvania is pretty simple to describe, even if it's not always easy to pull off: Rack up a big margin in Philadelphia, a smaller margin in Pittsburgh and the Philly suburbs, win an even smaller margin near Scranton, and hold on for dear life when the votes come in from the rural parts of the state, which James Carville once described as "Alabama in between." Four years ago, John Kerry was beating George W. Bush by 412,000 votes after ballots were counted in Philadelphia. He went on to win the state by only 144,000, or about 2.5 percent of the 5.8 million votes cast.

This time, Obama is hoping to count on even more votes out of Philadelphia, even if he can't win over some sections of the city where Democrats usually do well. Thousands of new Democratic registrations poured in to state offices on Monday, the last day to register for the Nov. 4 election. Democrats added 500,000 new voters around the state in the past year, while Republicans saw a net loss of 28,000.

In particular, turnout among black voters (very important in a city that's 44 percent black) could spike from the low 60 percent range up to around 70 percent. That could mean more than 40,000 new votes for Obama in Philly alone, as black voters support the first major party black presidential candidate. Obama will visit the city Saturday, making stops in black neighborhoods for mini-rallies designed to get the vote out -- his first such trip since the primary.

"This is an election of pride for us," said Maurice Floyd, a political consultant in Philadelphia who has done get-out-the-vote work for city Democrats and for Republican Sen. Arlen Specter over the years, and who served for four years as one of the city's election administrators. "This might not come along again for a long time." Other consultants, whether advising Obama or just observing from the sidelines, said voters seem to be more motivated than usual, meaning the hard work of getting supporters to the polls on Election Day could be a little easier. "People vote when they're scared, people vote when right track/wrong track [polling] is bad, people vote when elections are going to be contested," said Neil Oxman, a veteran Democratic strategist in Philadelphia who is not working for Obama. "And then on top of that you have a trained field organization and you have an African-American candidate."

At Club Damani, in the basement of the Harambee Institute Charter School in West Philadelphia (where the bathroom tiles are decorated with drawings of Marvin Gaye, Ray Charles and other black musicians), a few school workers and some friends from the neighborhood got together Tuesday night to watch Obama and McCain debate. The lounge usually hosts large weekly meetings of West Philadelphia for Obama, but it was mostly empty Tuesday night; the meetings are on Thursdays, and only a handful of people responded to fliers that organizers spread in the blocks around the school. Still, the people who did come out -- none of whom were officially members of the Obama support group -- said their neighbors are tuned in.

People want "something different, other than a white man, an old white man from the South," said Lee Sullivan, 46, who manages the radiology practice at the University of Pennsylvania Health System, a couple miles to the southeast. "A rich old white man from the South been the president the last how many, 16 years?" Sullivan and his friends said they knew plenty of people who didn't bother voting last time who are ready to come out this year. "People got soured on voting last time, too, because if you voted in 2000, you didn't want to vote in 2004," said Anwar Amin, 32, who teaches sixth grade at Harambee, an Afro-centric charter school.

Philadelphia politics being as complicated as they are, no one is quite sure exactly what the voter turnout will actually look like. In the primary against Hillary Clinton, Obama won Philadelphia easily, but with a lower turnout than he'll need in November; only about 54 percent of Democrats voted. Turnout in heavily black sections of the city was sometimes higher than the overall average -- across the eight wards in West Philadelphia, for instance, turnout was 55 percent. But in North Philadelphia's 10 wards, it was 47 percent. (Both neighborhoods are more than 75 percent black.) Gov. Ed Rendell, a former mayor who's still very plugged in to the city's political infrastructure, and Mayor Michael Nutter, whose organization is less developed than Rendell's, both supported Clinton -- which probably reduced turnout substantially in neighborhoods where Democrats usually work hard to drag out every last available voter.

Partly because the primary was so hard-fought, some Democratic operatives in the city are privately critical of Obama's campaign, which has set up its organization mostly separate from the established infrastructure. Elections in Philadelphia are often won through the liberal -- and, for some reason, legal -- distribution of "street money" to paid get-out-the-vote workers, funneled through the city's 69 ward leaders, many of whom also serve on the City Council or in the state House or Senate. (One consultant reminisced fondly to me about watching aides for an earlier Democratic campaign split up $1 million in small bills into envelopes of $50 or $100 each in preparation for Election Day, while armed guards stood watch outside headquarters. Another told a story about ward leaders pestering then-Vice President Walter Mondale for street money during a 1980 campaign stop on behalf of Jimmy Carter's losing reelection bid.) It's a cozy system, and one that quite a few people have some interest in maintaining.

Nutter, a reformer who won a tough five-way primary last year before cruising to a general election victory, wasn't tied to the established system and barely had an organization in many of the city's black neighborhoods (though that didn't stop him from becoming just the city's third black mayor). But even Nutter, who sometimes feuds with Philly's entrenched power structure, had to play the street-money game. Once he wrapped up the Democratic nomination last year, essentially clinching his victory, he sent the city's Democratic City Committee $200,000 the week before his election last fall, enough to help the party pay about $200 per division -- smaller areas within the city's wards, each with about 1,000 residents -- to get the vote out.

Obama's aides won't say whether their plan for Nov. 4 involves writing a check that local power brokers can turn into petty cash. With 78 field offices around the state and 11 in Philadelphia, the Obama campaign says it's relying on volunteer organizers. "We have the biggest and baddest volunteer organization that this state has ever seen, and we are going to leverage it for all it's worth on Election Day," said Sean Smith, Obama's Pennsylvania spokesman.

Local ward leaders said they still hope the campaign sends some money to the City Committee. "You still have to remind people to come out and vote, by any means necessary," said Lester Brown, the Democratic leader in West Philadelphia's Ward 24. On Election Day, Brown will have people knocking on doors, giving voters rides to the polls, and monitoring polling places. He says he likes to be able to buy them lunch. "You can't just take people for granted. Elections don't work that way," he said. "Although they may be excited, you still have to work on that."

The McCain campaign, meanwhile, says it'll pull voters out of the woodwork in Philadelphia and elsewhere. One campaign official predicted -- despite all the available evidence -- that if voter turnout in Philadelphia increased, it would benefit McCain. (Perhaps recognizing that didn't make much sense, the official wouldn't speak on the record.)

"I don't think there's any doubt that African-American turnout will be the best it's been in six, seven, eight, nine, 10 presidential elections," said Oxman, the Philly Democratic strategist.

Of course, with the economy as bad as it is, Obama ultimately may not need to worry about the margin he racks up in Philadelphia. Every day that bad economic news makes the headlines, the state as a whole seems to slip further away from McCain. Still, a good ground game in 2004 helped Bush keep the state close. Now, Democrats are starting to let themselves hope the same thing will help Obama put the state away.