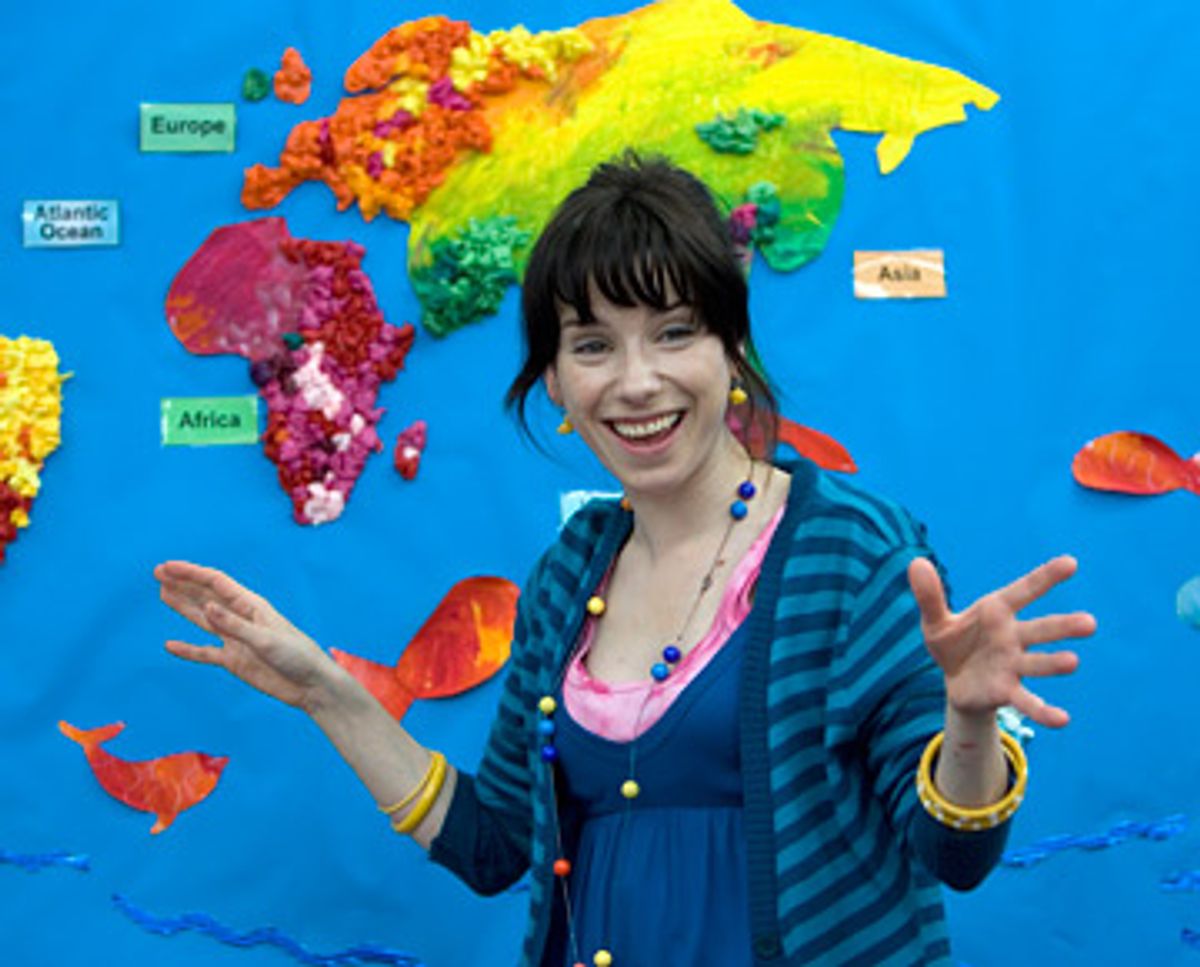 When we talk about movie masterpieces, what usually come to mind are epic works that wow us with their scale, pictures that spring from grand ambitions and even grander budgets. But it takes more than ambition, and more than money, to make an intimate masterpiece like Mike Leigh's "Happy-Go-Lucky," a picture so seemingly light that it might be hours (or even days) before you realize how deep and rich it really is. Made in characteristic Leigh fashion -- instead of following a strict script, the actors develop the characters through improvisational sessions -- "Happy-Go-Lucky" has no plot to speak of. Whatever story there is develops as a result of our deepening connection with the lead character, an unceasingly optimistic North London primary-school teacher named Poppy (Sally Hawkins), whose cheerfulness isn't a way of hiding from a chaotic, sometimes hostile world but a means of facing it. Leigh sets himself up for failure right there: Who wants to see movies about happy people? Misery, stress and confusion are the stuff of dramatic tension. But Leigh and his actors work mysterious magic in "Happy-Go-Lucky." This is a movie about hitting the groove of everyday life and, nearly miraculously, getting music out of it.

Leigh introduces Poppy in the movie's opening credits: A rather ditzy-looking brunette decked out in a multicolored crocheted cardigan and lace tights, she's riding a bicycle through London streets, waving and smiling at people whom, even at this early stage, we're certain she doesn't know. She pops into a bookstore and promptly begins to annoy its taciturn clerk with her prattle. Taking a book called "Road to Reality" from the shelf, she natters, "I don't want to be going there!" She laughs at her own jokes, because she can't crack even a smile from that annoyed clerk. Leaving the store, she realizes her bicycle has been stolen, and she shows just a flash of exasperation before resigning herself to its loss: "We didn't even get a chance to say goodbye."

The key to that early scene, at least for me, is that Poppy is both unbearable and compelling. In those early moments, I wasn't sure I could stand her for the duration of a whole movie. I was afraid she was going to be one of those women -- you can find them everywhere, but I happened to encounter a lot of them in Cambridge, Mass., in the 16 years I lived in the area -- who smile moronically at everything, even when there's nothing to smile at, who refuse to countenance anything that might bring negative energy into their airspace. Their insistence that the world should be "nice" has always seemed, to me, laced with control-freak hostility.

Bollocks to that. But the opening of "Happy-Go-Lucky" demands that we trust Leigh. He's too complex, and too openhearted, a filmmaker to give us a character that facile, and all you have to do is watch Poppy, as Hawkins gradually gives shape to her, to understand that this is a woman who's fully engaged with the people around her, flaws and all -- not a woman who's trying to wrest her fellow humans into her own constricting vision of utopia.

She's also just a regular girl -- and even though she's nearing 30, there's still something undeniably girlish about her, about the way she still goes out and gets drunk with her mates on the weekends, or gamely agrees to accompany a co-worker to a flamenco lesson, or, while developing a lesson plan for her young students, fashions a bird mask out of a paper bag and clatters around her flat, squawking and flapping her "wings." And now that her bicycle has been stolen, Poppy decides it's time to learn to drive. The luck of the draw gives her a driving instructor who's wound so tightly that he's ready to explode: Scott (played by the supremely reliable actor Eddie Marsan) is bound by the strictest rules of the road, and of life. He's annoyed that Poppy always wears impractical and, in his mind, unsafe high-heeled boots to her driving lessons; he's also angry that England has been overtaken by people who aren't the same color he is. In Scott's mind, every annoyance and infraction are of equal weight: He's consumed by his vision that the world is going to hell, and he feels it's his job to put it back on track.

The scenes outlining Poppy's evolving relationship with Scott -- to call it a friendship would be a mischaracterization -- are like solid little pegs around which the rest of this blissfully free-form movie is wound. Poppy challenges Scott more than she humors him: She teases him mercilessly about his weird driving mnemonics (you'll have to see the movie to find out exactly what his favorite, "En-ra-ha," means because I'm hard-pressed to explain it) and laughs off his comments about her boots. He responds to her goofball chitchat by grimacing, baring his little pointed squirrel's teeth -- but even he is softened by her. Poppy is the sort of woman who fills every empty space with a joke or some chatter. She's always having a laugh with her flatmate and fellow teacher, Zoe (Alexis Zegerman), or her younger sister, Suzy (Kate O'Flynn), a student who needs a bit of encouragement on her upcoming exams. When a chiropractor cracks Poppy's back, she writhes in pain for a split second before declaring that whatever it was he did hurt so much, it makes her laugh.

But Poppy's cheerfulness isn't a shield against reality. As much as she wants others to be happy, she doesn't suffer delusions of omnipotence -- in other words, she knows that she's not powerful enough to create happiness for others merely by wishing for it. And that's where both the boldness and the delicacy of Sally Hawkins' performance come in. This is the finest performance of the year -- though it's only October, I can't believe I'll see anything better. Poppy is a screwball humanist. Her friends adore her because she's loyal and buoyant, because she does the work of lifting their spirits when they just don't have the energy. But scene by scene, Hawkins adds further layers of complexity to the character. When Poppy sees one of her students beating up another kid in the schoolyard, her face shows both determination and a hint of anguish. She's poised to take action on behalf of this troubled, aggressive kid, even as she acknowledges her own limitations in solving every one of the world's problems. Later, after she has called in a counselor to talk to the boy, he wants to make sure he's not angry with her. Her response is reassuringly casual and genuine: She's just looking after him. "That's what mates do."

The strangest scene in "Happy-Go-Lucky" -- it's both the most difficult to grasp and the most transcendent -- is one in which Poppy wanders into a dark tangle of neighborhood streets, the kind of place no woman should ever walk alone at night. She knows she shouldn't be there; her face shows a reasonable degree of fear and caution. But she hears a strange sound -- a kind of mumbling chant -- and she's drawn to it. It's coming from a rather dirty and obviously unhinged homeless guy (he's played by Stanley Townsend), and she strikes up a rambling, dadaist conversation with him for reasons that aren't immediately -- or perhaps ever -- clear.

Why doesn't she run? Not even Poppy knows the answer to that. (At one point she asks herself what on earth she's doing there.) But the scene is pivotal because it speaks so clearly about Poppy's desire to connect rather than deflect. Village Voice critic J. Hoberman once compared Leigh to Charles Dickens, and the analogy is apt for lots of reasons, not least because Leigh's technique meshes so seamlessly with his compassion. He allows the narrative to emerge from the characters; their stories take shape as we learn who they are and how they engage with the world.

Hawkins has worked with Leigh before, in both "Vera Drake" and "All or Nothing." (She also gave the only believable performance amid the complete bunk of Woody Allen's "Cassandra's Dream.") But here, Leigh has given her the challenge of a lifetime -- the kind of role an actress can play at just one point in her life -- and she more than meets it. In that exchange with the homeless guy, Poppy does the unthinkable: She listens, to someone whose enunciation is almost impossible to understand, and to someone who obviously smells bad. She leans in close to hear what everyone else has shut out, the everyday sound of music.