"Greatest film ever" or a cream cake? 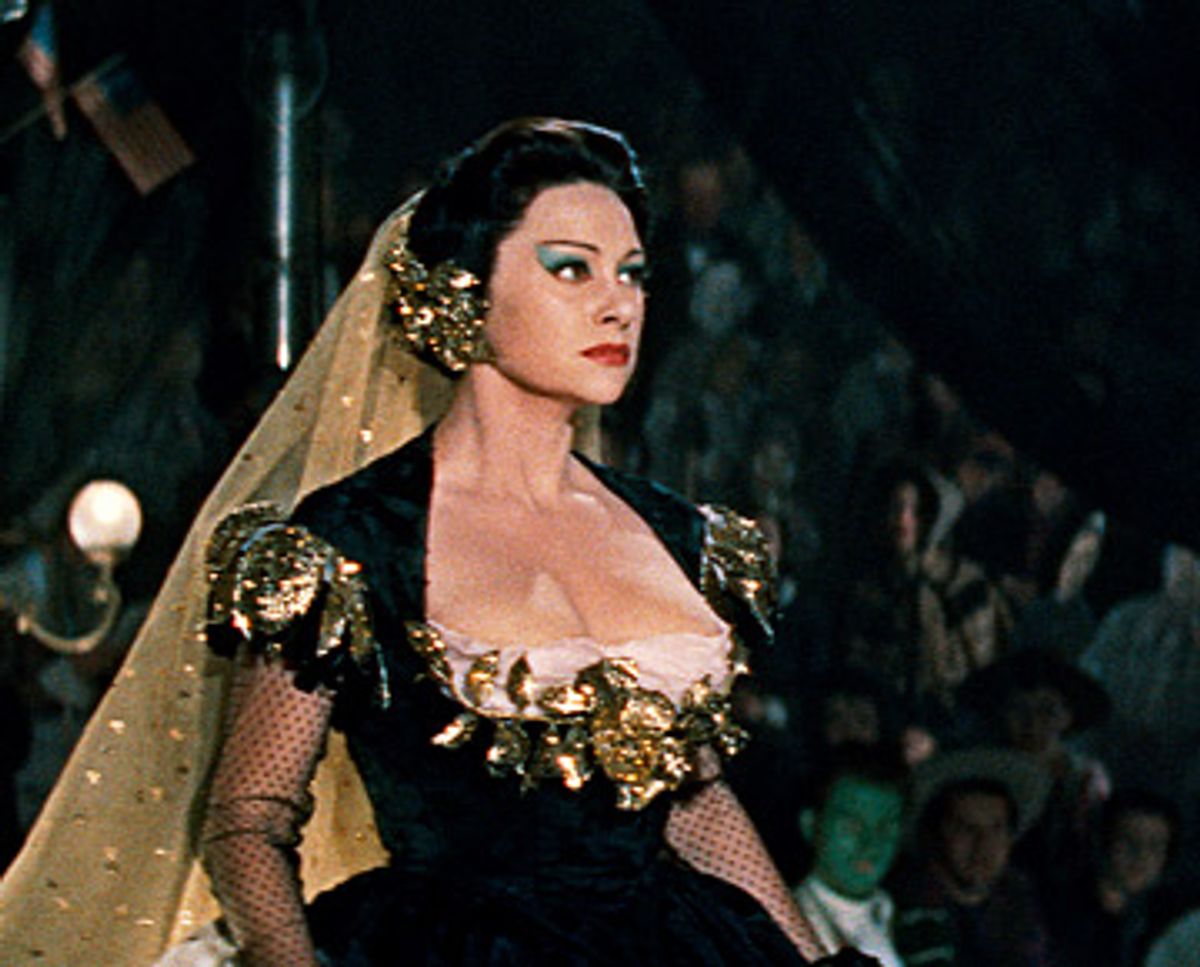 "Lola Montès," the last film made by German-French director Max Ophüls -- European cinema's greatest world-weary romantic -- is one of those movies made legendary more by its mutilation and invisibility than by what it is or what it has to say. When it was made in 1955, "Lola Montès" was postwar Europe's closest equivalent to a Hollywood spectacle, combining big stars, a beloved director, an international roster of rascally producers, a pseudo-historical setting complete with opulent sets and costumes, crowds of extras and expensive widescreen color film and cameras. Three different versions were made, in French, German and English. Production cost 8 million German marks, or around $2 million in 1950s money, an extraordinary sum for that time and place.

But if you want to understand why "Lola Montès" was included in this year's New York Film Festival after previous appearances in 1963 and 1969 (no other film has ever played the festival more than once) and why this newly restored version from the Cinémathèque Française opens theatrically this week in New York and Los Angeles -- again, the film's third United States release -- I think you have to look at what happened next. Premieres in Paris and Munich were disastrous, and Ophüls supervised a first, frantic round of editing and redubbing. Then the English-language version was butchered from 115 minutes down to 90 minutes, and finally to 75 minutes (running time of the 1959 U.S. release).

In Ophüls' original version, the life of legendary 19th century courtesan Lola Montès, or Montez (actually an Anglo-Irish woman who was born Elizabeth Gilbert in 1821), is recounted in a deliberately chopped-up chronology. Played by '50s French sex symbol Martine Carol with statue-like imperviousness, Lola zigzags back and forth between her later years as a touring circus attraction in America -- locked in a semi-sadomasochistic relationship with impresario Peter Ustinov -- and youthful love affairs with composer Franz Liszt (Will Quadflieg), King Ludwig I of Bavaria (the wonderful Anton Walbrook), a Scottish officer (Ivan Desny), a student revolutionary (Oskar Werner) and various others.

It's a classic Ophüls gesture; even in a historical romance loaded with wedding-cake gowns and gingerbread palaces, he's seeking to ironize romantic love, to underline the inevitability of aging and loss and mortality, and to remind us that life and love (and his film) are all performances. As he wrote later, "The audience is expecting a cream cake but instead it gets a punch in the stomach!"

Here's the thing about that, though: Ophüls had been making commercial films since the early 1930s in Germany, France and the U.S. (Speaking of which -- when are his underrated Hollywood films, "Letter From an Unknown Woman," "Caught" and "The Reckless Moment," going to be available in decent DVD editions?) Throughout his career, he tried to walk a fine line between artistic experimentation and popular success. On some level, he must have concluded that the cream-cake-to-punch-in-stomach ratio of "Lola Montès" was a mistake, or he wouldn't have gone along with not merely trimming the film, but reshaping it into a straightforward chronological story.

Then again, the whole process of making the film, seeing it booed and derided, and then cannibalizing it himself under producers' orders seemed to finish Ophüls off. By the time the recut French version premiered in January of 1957, he had entered a Hamburg hospital with heart failure, and would die there two months later.

I've never seen the shortened, forward-chronology version of "Lola Montès," which was in circulation from the late '50s through the late '60s, when French New Wave producer Pierre Braunberger acquired its rights and attempted the first full reconstruction. I'd be curious to compare it with the Cinémathèque's painstaking new digital restoration, which comes as close as possible to Ophüls' French-language original, complete with its old-school CinemaScope aspect ratio of 2.55:1. (That is, a wider widescreen image than was used in later CinemaScope films.) As if it all weren't confusing enough, a reconstructed German-language version is also in circulation in Europe; we may well see dueling DVDs within a year or two.

Anyway, by the time "Lola Montès" played the first New York Film Festival in 1963, Ophüls was dead and the film had become a cause célèbre, Exhibit A in the film world's cold war between philistine audiences and mainstream critics, on one side, and a new generation of intellectuals on the other. The 23-year-old François Truffaut had defended the film against its French attackers, and Andrew Sarris of the Village Voice became its American champion, calling it "the greatest film of all time" and adding, "I am willing to stake my critical reputation, such as it is, on this one proposition above all others." OK, Andrew, but don't beat around the bush: Did you like the movie or not?

I was going to speculate about whether Sarris' superlatives in fact referred to the butchered, pre-restoration version of "Lola Montès" -- presumably the only one available in 1963 -- but Sarris has clarified this in a recent New York Observer column. It's not my intention to do some snarky takedown of the last living legend of American postwar film criticism, and I couldn't manage it if I tried. But Sarris' column reads to me like a rueful recognition of the difficulty contemporary audiences have in relating to "Lola Montès," which isn't simply a film made in a vanished era but a film made in one vanished era that evokes another, even more distant one:

"As I told an audience for an unprecedented third showing of 'Lola Montès' at this year's 46th New York Film Festival, when I indulged in a bit of Lolatry in 1963, the character in the film I most resembled was Peter Ustinov's Ringmaster [at the American circus where Lola makes her living]. Indeed, that's really what I've been doing for the 55 years since I began appearing in print. I always just wanted to bang a drum announcing the greatest shows on earth, the films that constituted the alternate universe for me ever since I could remember. My problem is that I cannot convey in print the sheer ecstasy I felt when I finally saw 'Lola' properly for the first time in Paris in 1961. So I beat the drum with my superlatives out of sheer frustration with the limitations of my prose."

I think that's wonderful writing, which briefly conjures the excitement of coming out of the circumscribed world of American movies in the early '60s and encountering the breathtaking cinematic spectacle, emotional complexity and Old World fatalism of Ophüls' white elephant. It makes me wish I could see the film myself with the eyes of another era, but unfortunately it doesn't change my view that "Lola Montès" comes off in 2008 as an enormous and creaky artifice, tough for modern viewers to "get" without a laborious set of CliffsNotes. What was once original and confrontational about it has been swamped by later movies, and what remains seems grand and old-fashioned without being especially absorbing. Don't get me wrong: "Lola Montès" is a stunning visual artifact, and if you love movies you shouldn't miss it. But it's a cream cake after all; if there's still a stomach-punch in the film it's delivered by a Viennese sugar fairy.

In some odd way, the huge production scale and marvelous widescreen color scheme make "Lola Montès" seem more distant and artificial than Ophüls' smaller-scale black-and-white films. His acknowledged 1953 masterpiece, "The Earrings of Madame de ...," has an intimacy and an actorly precision that make its mechanically constructed plot come alive. "La Ronde," his first film after returning to Europe from Hollywood in 1950, is a tremendously compressed combination of breathtaking technique, cynical sex farce and Brechtian confrontation. Perhaps it's not coincidental that those films, together with "Le Plaisir" from 1952, are now available on DVD from the Criterion Collection; and taken together they are without question the best starting point for Ophüls neophytes.

Part of the problem with "Lola Montès" is that it's the apotheosis of Ophüls' mature style, with its ultra-deluxe set pieces, ambitious traveling shots and ambiguously detached attitude -- and if he himself drew that style from Orson Welles, Ophüls' influence is so pervasive in later cinema as to be almost invisible. From Hitchcock to Kubrick to Coppola to Scorsese to Spielberg and onward, most big-name filmmakers of the Western world from the late '50s onward owe an incalculable debt to Ophüls, who abandoned the "larger theater" model of moviemaking for a more fluid, more spectacular and more imagistic storytelling mode that was driven first and foremost by camera movement.

But it takes a prodigious degree of sympathy and imagination -- a degree I clearly don't possess -- to see "Lola Montès" after you've already seen "Vertigo" or "A Clockwork Orange" or "The Godfather" and to grasp the correct relationship between them. In large part, that's because Ophüls' forward-looking technique is married to his perplexing fascination with the social rituals of 19th century Europe, and because of his total lack of interest in anything we would consider psychological realism.

In the years immediately following the Holocaust (which his son, Marcel, would capture so unforgettably in the 1969 documentary "The Sorrow and the Pity"), Ophüls -- exactly the kind of European Jewish sophisticate Hitler yearned to wipe out -- returned home to make utterly apolitical movies about love in the lost golden age of European aristocracy. And hell, why not? You can call that willful blindness or single-minded artistic commitment; it has elements of both. For me at least, Ophüls will always be a film-history anomaly. He belongs on anybody's short list of the greatest 20th century European directors, alongside Dreyer and Renoir and Rossellini and Bergman and Fellini. His influence might be greater than several of the names on that list, but his actual movies, beautiful as they are, remain passionately attached to the past.

"Lola Montès" is now playing at Film Forum in New York and the Royal Theatre in Los Angeles. It opens Nov. 7 in Chicago, Nov. 19 in San Francisco and Nov. 21 in Washington, with more cities to follow.