Sarah Palin: The view from Alaska

Amid "Troopergate" and other government scandals, including killing wolf pups, an Alaskan writer explains why the Palin phenomenon rings hollow in his home state. 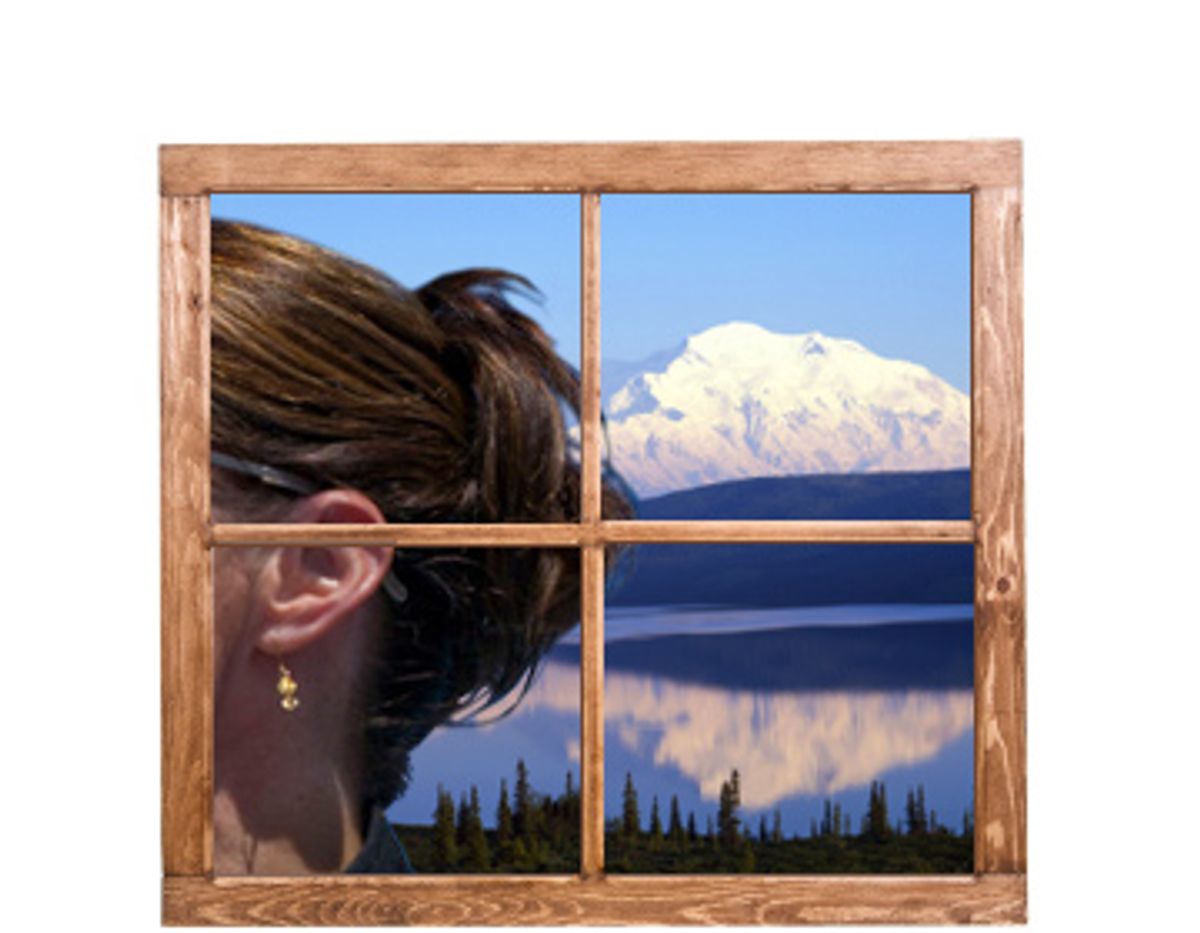 I sat on the bank of the Kobuk River in northwest arctic Alaska on a mid-September morning. Upstream somewhere, wolves were howling -- their chorus filling the silence, close enough that I could hear the aspiration at the end of each wavering call. Behind me, the slate-gray heave of the Brooks Range spilled off toward the north, the shapes of some peaks so familiar I've seen them in my sleep. The nearest highway lay 250 miles away. This is the Alaska where I spent half my life, and the only place that's ever felt like home -- the land of Eskimo villages, waves of migrating caribou and seemingly limitless space.

Though I was beyond the reach of the Internet and cellphones, and life was filled with rutting bull moose, incandescent autumn light and fresh grizzly tracks, I knew that thousands of miles to the south, the rest of the country was getting a crash course on our governor, Sarah Palin -- someone who believes that climate change isn't our fault; is dead set against a woman's right to choose; has supported creationism in the schools; and was prayed over by a visiting minister at her church to shield her against witchcraft.

How was I to explain to all my lower 48 friends and writing colleagues how such a person could have been elected to lead our state -- let alone been chosen to possibly become vice-president? Truth be told, I was as startled as anyone when I heard the news. At first I thought the McCain campaign's announcement was some sort of bad joke.

In the broadest sense, Palin is a poseur. Alaska is too large and culturally diverse (it's only a bit smaller than the entire lower 48 east of the Mississippi, and once was divided into four time zones) to be summed up by some abstract, romanticized notion. And even if it could be, it sure wouldn't be symbolized by Palin. "The typical Alaskan? She couldn't be farther from it," says Alaska House Minority Leader Beth Kertulla.

Still, Palin is a genuine Alaskan -- of a kind. The kind that flowed north in the wake of the '70s oil boom, Bible Belt politics and attitudes under arm, and transformed this state from a free-thinking, independent bastion of genuine libertarianism and individuality into a reactionary fundamentalist enclave with dollar signs in its eyes and an all-for-me mentality.

Palin's Alaska is embodied in Wasilla, a blue-collar, sharp-elbowed town of burgeoning big box stores, suburban subdivisions, evangelical pocket churches and car dealerships morphing across the landscape, outward from Anchorage, the state's urban epicenter. She has lived in Wasilla practically all her life, and even now resides there, the first Alaska executive to eschew the white-pillared mansion in Juneau, down on the Southeast Panhandle.

Folks in the Mat-Su Valley, as the area is known, overwhelmingly support their favorite daughter's policies -- including a state-sanctioned program where private pilots chase down and kill wolves from small aircraft, and another that favors oil drilling offshore in the arctic sea ice and in the Arctic National Wildlife Refuge. These same voters forage at McDonald's and Safeway in their hunter camouflage, and make regular wilderness forays up and down the state's limited highway grid with ATVs, snowmobiles and airboats in tow behind their oversize trucks. Sometimes I imagine I can hear the roar echoing across the state, all the way to the upper Kobuk, where easements for the highways of tomorrow are already staked out across the tundra.

Like many Alaskans, I resent Palin's claims that she speaks for all of us, and cringe when she tosses off her stump speech line, "Well, up in Alaska, we…." Not only did I not vote for her, she represents the antithesis of the Alaska I love. As mayor, she helped shape Wasilla into the chaotic, poorly planned strip mall that it is; as governor, she's promoted that same headlong drive toward development and despoilment on a grand scale, while paying lip service to her love of the place.

As for that frontierswoman shtick, take another look at that hairpiece-augmented beehive and those stiletto heels. Coming from a college-educated family, living in a half-million-dollar view home, basking in a net worth of $1.25 million, and having owned 40-some registered motorized vehicles in the past two decades (including 17 snowmobiles and a plane) hardly qualifies Palin and her clan as the quintessential Joe Six-Pack family unit -- though the adulation from that quarter shows the Palins must be fulfilling some sort of role-model fantasy.

Palin can claim to know Alaska; the fact is, she's seen only a minuscule fraction of it -- and that doesn't include Little Diomede Island, the one place in Alaska where you actually can see Russia. So she can ride an ATV and shoot guns. Set her down in the bush on her own and I bet we'd discover she's about as adept at butchering a moose and building a fire at 40 below zero as she is at discussing Supreme Court decisions. And that mountain-woman act is only the tip of a hollow iceberg.

Palin, and by extension, the McCain campaign, has hijacked our state for political purposes, much to the chagrin of the tens of thousands of Alaskans who loathe what she stands for. Her much-touted popularity among residents has eroded over the past six weeks to somewhere in the mid-60s -- not exactly what you'd expect in support of a home girl making a White House run.

There are no doubt a variety of reasons for this decline, but many Alaskans are embarrassed -- not just by her, but for our state and for ourselves. What's with the smug posturing, recently adopted fake Minnesota accent, and that gosh-darn-it hockey mom pitch? Maybe it plays well in Peoria (and presumably Duluth), but it's all an act. "She's definitely put on a new persona since she's been a vice-presidential candidate," says Kertulla, who has worked closely with Palin for the past 18 months. "I don't even recognize her."

Affectations aside, there's plenty about Palin we Alaskans do recognize, and all too well. She's already proven to us that her promises of transparent government, attendant to the will of the people, are bear pucky. We know about her private e-mail accounts and her systematic obstruction of the Alaska Legislature's investigation of the so-called Troopergate scandal. But let's turn to her environmental record, where a similar pattern of obfuscation continues.

First, Palin pushed hard, along with sport hunting and guiding interests, to help defeat a ballot initiative that would have stopped the state's current aerial wolf control program, which had been criticized by the National Academy of Sciences and the National Research Council for flawed science. Now her administration has pointedly refused to respond to repeated public information requests (I'm one of the petitioners, and a potential litigant), regarding the apparently illegal killing of 14 wolf pups at their dens on the Alaska Peninsula this spring by state personnel, including two high-level Department of Fish and Game administrators. A biologist at the scene admitted to an independent wolf scientist that the 6-week-old pups were held down and shot in the head, one by one. This inhumane practice, known as "denning," has been illegal for 40 years. But a simple request for information on the details of this operation, including to what extent the governor was involved in the decision, has resulted in a typical Palinesque roadblock and a string of untruths.

Our I-love-Alaska governor was also instrumental in defeating a ballot initiative to stop development of a gargantuan open-pit mine incongruously known as Pebble near the headwaters of the most productive salmon watershed in the state, Bristol Bay. The current mine design calls for building the world's largest earthen dam to hold back an enormous lake of toxic waste -- this in a known earthquake zone. Crazy stuff, yet Palin openly opposed the initiative, in lock step with international mining corporations that invested millions of dollars in a misinformation campaign.

But Palin's certified anti-environmental whopper is her lawsuit against the Bush administration (of all outfits) for listing polar bears as threatened under the Endangered Species Act. She claimed Alaska's own experts had completed a review of the federal data and concluded that the listing was uncalled for. The truth was, state biologists had come to the opposite conclusion. But that report was never released, and her researchers had a gag clamped on them. Palin simply didn't want anything to get in the way of offshore oil drilling in moving pack ice -- where there is no way to contain, let alone clean up, catastrophic spills.

Whenever science or rules get in Palin's way, she blows them off. Says homesteader Mark Richards, co-founder of the Alaska Chapter of Backcountry Hunters and Anglers (a moderate conservation group), "Palin, like Governor Murkowski before her, is part and parcel of the good-ol-boy network that says, 'Alaska is open for business.'"

Want to talk to Sarah? As governor, she has been accessible only on her carefully chosen terms, a trend we're now witnessing on the national stage. And how about those Katie Couric moments when she drifts just a skosh off a well-rehearsed script? Are those a recent phenomenon, brought on by all this new information, pressure and the liberal-gotcha media? Nah. She's been spouting "political gibberish" (to quote gubernatorial opponent Andrew Halcro) since she arrived on the Alaska scene. Yet somehow she continues to get away with it.

In the end, Palin's attempt to cash in on the Eau d'Alaska mystique as she supports its destruction sickens those of us who do love this land, not for what it will be some day, after the roads and mines and pipelines and cities and malls are all in, but for what it is now. What we see before us is the soul of an ambitious, ruthless, Parks Highway hillbilly -- a woman who represents the Alaska you probably never want to meet, and the one we wish never existed. That said, we're all too willing to take her back. The alternative is just too damn frightening.

Writer and photographer Nick Jans has lived in Alaska for 30 years. He is the author of "The Grizzly Maze: Timothy Treadwell's Fatal Obsession with Alaskan Bears," a member of USA Today's board of editorial contributors and a contributing editor of Alaska Magazine.