The GOP has only one tactic it uses to win elections -- tribal warfare combined with character smears -- and one sees that this year as vividly as ever. 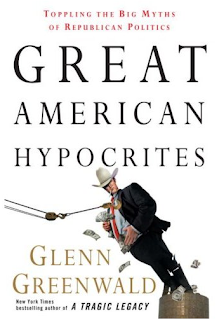 The book I wrote earlier this year -- Great American Hypocrites:  Toppling the Big Myths of Republican Politics -- has now been released in its paperback edition, which you can find here at Amazon or at any local bookstore.  The book details the personality-based, substance-free (and issue-obfuscating) campaign tactics which Republicans have used since 1980 to win national elections -- building manipulative personality cults around their leaders while simultaneously destroying the Democratic candidate with character smears -- and describes, I believe, precisely the tactics on which the McCain campaign has come to rely with increasing desperation, and the reasons why they must:

For the past three decades, American politics has been driven by a bizarre anomaly. Polls continuously show that on almost every issue, Americans vastly prefer the policies of the Democratic Party to those of the Republican Party. Yet during that time, the Republicans have won the majority of elections. This book examines how and why that has happened.

The most important factor, by far, is that the Republican Party employs the same set of personality smears and mythical, psychological, and cultural images to win elections. . . .

The Republican Party of Karl Rove and Lee Atwater will use these same personality-based themes in the 2008 election, because it is all they know and, more important, because nothing has stopped it yet.  Their actual platform of more Middle East militarism and domestic policies designed to further widen America’s rich-poor gap is, as every poll shows, deeply unpopular. A mid-2007 Rasmussen Reports Poll revealed just how disadvantaged Republicans are when it comes to actual issues and substance, rather than personality smears:

Democrats are currently trusted more than Republicans on all ten issues measured in Rasmussen Reports tracking surveys. Democrats even have slight advantages on National Security and Taxes, two issues “owned” by Republicans during the generation since Ronald Reagan took office. . . .

Rasmussen Reports monthly surveys have shown a sharp decline in the number of Americans considering themselves Republicans over the past eight months.

A New York Times/CBS poll released in mid-December 2007, as the primary presidential season intensified, revealed that Americans have an overwhelmingly unfavorable opinion of the Republican Party (33–59 percent), while their opinion of Democrats is favorable (48–44 percent) — a bulging 15-point advantage for Democrats. In early 2008, this mountain of anti-GOP polling data led conservative David Brooks, in the New York Times, to conclude: “The Republican Party is more unpopular than at any point in the past 40 years. Democrats have a 50 to 36 party identification advantage, the widest in a generation. The general public prefers Democratic approaches on health care, corruption, the economy, and Iraq by double-digit margins.”

Worse still for Republicans, they are burdened with the record and reputation of one of the most widely despised presidents in American history and by the country’s most disastrous war. Trying to win this election with cultural, psychological, sexual, and gender-based smears and John Wayne mythology is their only option, and they will pursue it vigorously and with glee. They always do.

The final chapter describes how these personality-driven tactics will be applied specifically to inflate John McCain into "the paragon of exactly those virtues he most lacks: the apolitical, independent-minded, moderate maverick who rejects elitist values and is an honor-bound, truth-telling man of the people, pursuing his principles even when doing so comes at a great political cost."  And the central theme of the book examines how these tactics can be undermined and ultimately destroyed.  The Amazon page contains numerous excerpts of reviews of the book.

For those who missed them, I wrote an unusually large number of posts yesterday, all regarding the campaign: