Blood in the water in North Carolina

Republican Sen. Liddy Dole may be a goner, and John McCain is in trouble in a state the GOP hasn't lost since 1976. What happened? 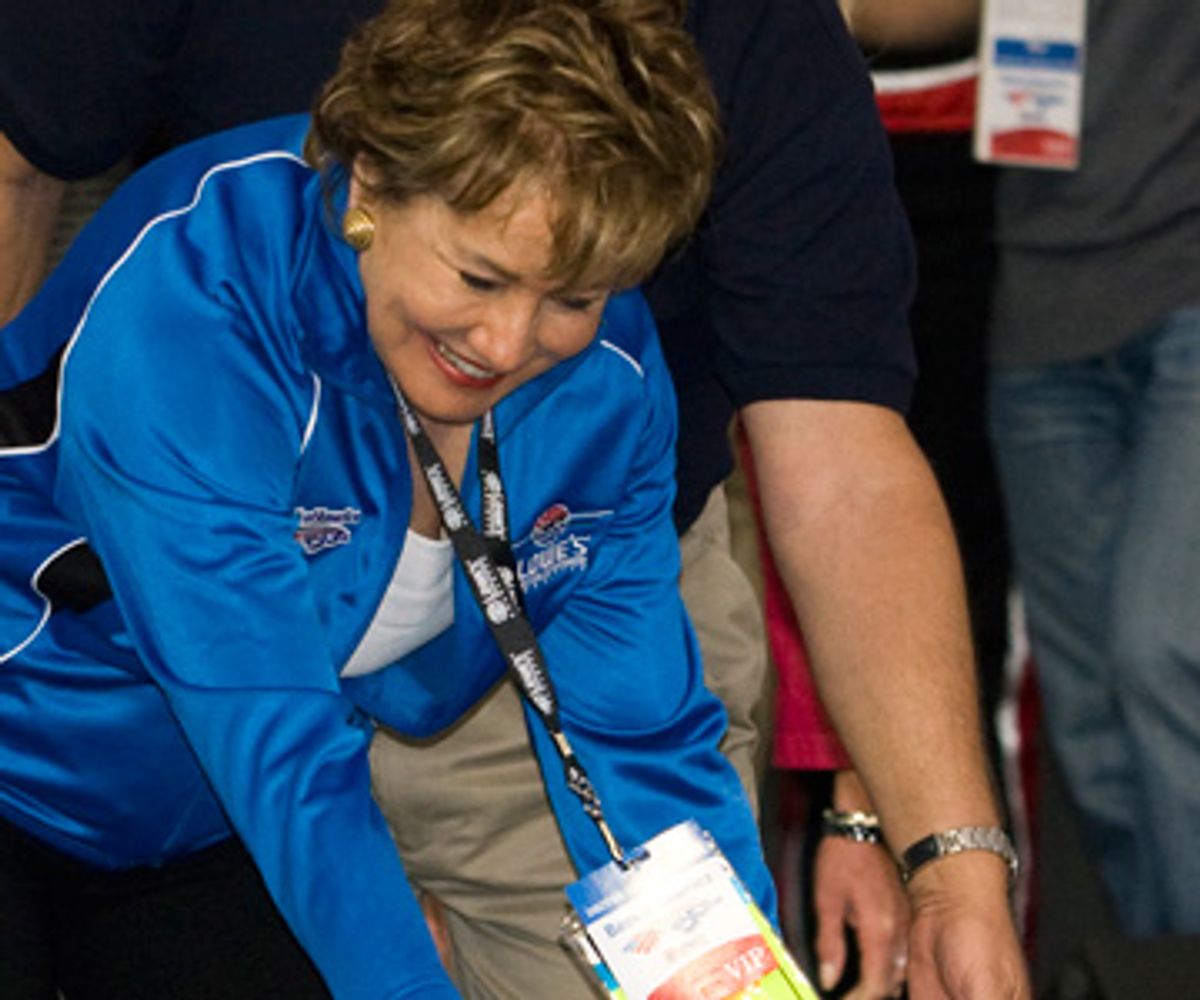 Elizabeth Dole stood on the track at Lowe's Motor Speedway Saturday night, a few minutes before NASCAR's Bank of America 500 got started, and looked up at the stage. Up where Dole had just given a quick welcoming speech to the racetrack crowd of 115,000 (many of them her constituents in North Carolina), Jessica Simpson was getting ready to sing the national anthem. And evidently, Dole had no idea who she was. "The young lady who is singing was over [there] practicing a minute ago," Dole said, an expression of pity on her face. "God bless her heart."

Simpson probably did need the practice -- as ESPN's cameras and the crowd watched, she sang about broad stripes and bright stars lasting through "the perilous flight" -- but it's Dole who may need the pity. Polls show she's likely to lose her Senate seat to Democrat Kay Hagan, after doing little during a single six-year term to distinguish herself. (Even the two years she spent as head of the National Republican Senatorial Committee ended badly -- she presided over the Democratic takeover in 2006.) Though many observers thought Hagan's campaign was stalled over the summer, national Democrats didn't give up: The Democratic Senatorial Campaign Committee has been hammering Dole with folksy, catchy ads featuring cranky old white guys complaining about her ("What's happened to the Liddy Dole I knew?" is the tag line) that stand out from the usual political fare. The economic meltdown has been cataclysmic for Republicans everywhere, and now it seems to have helped put Hagan in a position to win.

In any other election year, what's happening in North Carolina would be just another case of a first-term senator paying a little less attention to winning a second term than she probably should have, and discovering voters had noticed. (Dole, who lives in Washington's Watergate apartment complex with her husband, Bob, recently found herself on the defensive over newspaper reports that she spent only 13 days in the state in 2006; aides say she made unspecified other trips when she didn't do any official business, but that's not much of a comeback.) But even if Dole hasn't wrecked her chances all by herself, she may get run over by Barack Obama's campaign. No Democratic presidential candidate has won North Carolina since Jimmy Carter in 1976, but -- shockingly -- the state has become a battleground in this election. John McCain's strategists have already concluded Dole is a lost cause, and now they're trying to keep North Carolina's 15 electoral votes from going to Obama.

"The McCain campaign is playing a little catch-up in North Carolina now," said Paul Shumaker, the chief consultant for Republican Sen. Richard Burr, who's probably lucky his seat isn't up till 2010. As a sign of how scary the national map now looks for McCain, he is actually going to have to show up in North Carolina -- he will be in Wilmington on Monday, in a corner of the state where Republicans need to rack up big margins to offset Democratic strength in Charlotte and the Raleigh-Durham-Chapel Hill "Research Triangle." (The suburbs and exurbs between Charlotte and the Triangle are where the race may well be determined.) Sarah Palin was in North Carolina last week, and Cindy McCain was in the state Saturday. Like Dole, she also swung by the track Saturday night -- she was the grand marshal of the race, and toured the pits and garage areas with former Washington Redskins coach Joe Gibbs before greeting the crowd. If she was worried, she didn't show it; an amateur drift racer who campaigns at a NASCAR race every few weeks, she might have come to the speedway Saturday even if McCain didn't need the help here. "He has more energy than anyone," she told Gibbs about her husband, bucking up one of his campaign's more prominent supporters.

Energy may not be enough for him. Like everywhere else this year, part of what has Democrats excited is the potential for a surge of new voters. Since January, Democrats added 245,305 new registrations, while Republicans added 46,748. A third of the new voters are black, according to state statistics. The state has seen an influx of newcomers over the last decade, drawn -- until recently -- by the banking industry in Charlotte and the high-tech jobs in the Triangle. Between 2004 and 2006 alone, the percentage of residents who were born outside the state increased from 33 percent to 36 percent, a pretty quick shift in a state that may soon be changing demographically as rapidly as Virginia has.

Trying to take advantage of that dynamic, Obama has 45 field offices open, everywhere from Charlotte, the state's biggest city, to Cullowhee, with fewer than 4,000 residents. He's spending more than $1 million on TV ads a week, while McCain just ratcheted up his buy in the last few days; now both campaigns are spending enough to dot the NFL broadcasts on Sunday with political commercials. Obama's state headquarters, in an upscale office building on the outskirts of Raleigh, just expanded to take over a second suite down the hall. On top of that, Obama almost has more volunteers than his aides here know what to do with. "Every precinct in this state will be worked by people from that precinct," Obama's North Carolina director, Marc Farinella, said.

By simply forcing McCain to work for North Carolina -- and spend money here -- Obama has already done more than some people in the state expected when the campaign first announced it would make North Carolina a priority. But it's quite possible Obama will manage much more than that. One recent poll by a Democratic firm showed Obama winning the 828 area code, which covers the western part of the state. That one was probably a bit of an outlier, though. "If he does that in western North Carolina, this might be a slam-dunk," Rep. Mel Watt, a Democrat who represents Greensboro, said with a laugh.

The Senate race might not wind up being as close as the presidential one. Even rock-ribbed Republican voters said they were giving up on Dole. "I don't like the other one either, but I don't have much choice," said Joe Langley, 71, a retiree from Stoneville and a lifelong Republican who's voting for McCain and -- even though he doesn't like her so much -- Hagan. "I'm giving her a shot ... [Dole]'s No. 93 on getting things accomplished." Langley was actually quoting a Hagan ad paid for the by the Democratic Senatorial Campaign Committee; if Hagan wins, she may owe more to DSCC chairman Chuck Schumer than to her own efforts.

Which isn't to say she's not working hard. Hagan zipped around the state all weekend, bouncing from the North Carolina A&T University homecoming parade in Greensboro (the area she represents in the state Senate) to a fair in Winston-Salem to a barbecue in Morganton before winding up at the same NASCAR race as Liddy Dole and Cindy McCain. Still, it wasn't until the last few weeks that she started pulling ahead. "I think people are understanding the fact that Liddy Dole has voted over 92 percent of the time with George W. Bush," Hagan said. "People realize that she's not representing people here in North Carolina." The presidential campaign is helping her, too. "We haven't had presidential advertisements in North Carolina since Jimmy Carter," she said. Rep. Watt said Obama's turnout machine could be what puts Hagan in office.

As for the incumbent, Dole seems to be running a much more somnambulant campaign. She dodged five proposed debates, passive-aggressively failing to commit to them rather than outright refusing. Voters are seeing her on her terms, not theirs -- her campaign Web site doesn't have a public calendar of events, and her Senate calendar is three and a half years out of date. While she was at the race Saturday, aides limited her to banal small talk with Salon -- after she spoke with a local Associated Press reporter at the NASCAR media center, they hustled her off to the suites to mingle with the race's sponsors and other donor types and said she'd try to call me later, which she didn't. (They blamed the AP guy for taking too much of her time, but he said they actually gave him 10 minutes less than they promised him.)

Even at the race, though, Dole wasn't as visible as Cindy McCain (even if she was nicely outfitted in a Bank of America 500 warm-up jacket). While McCain toured the pits and schmoozed with fans, Dole hung back and prayed with drivers before the race started. (There was a lot of prayer. "Thank you for allowing us to live in the greatest country on the face of the earth," went the prayer read over the P.A. system just before the engines started. "We thank you for what you did 2,000 years ago on Calvary's cross.") But really, NASCAR races aren't great for actually doing much retail campaigning; many of the people there aren't in the best state of mind to discuss the election. Like the guy with an alarmingly large pile of beer cans next to him who told me he'd learned on the Internet that Obama is a Muslim, born in Cairo and not a U.S. citizen, whose secret other middle name besides Hussein is -- yes, you guessed it -- Mohammed. He won't be voting, though, because the shadowy Bilderberg Group controls Congress, and Congress controls the president. His two friends sitting nearby, who seemed content to let him pull their weight when it came to drinking, will be voting for McCain, but feared Obama would win.

This is still North Carolina, after all, and race will still probably play a part in how the presidential election finishes here. "I don't think the United States is ready for a black person to be president," said Lucille Anderson, 73, from Lawsonville. "I think the blacks would be mean to us ... they'd probably take us over." But sitting across the picnic table from her at the Dixie Classic Fair in Winston-Salem Saturday, Anderson's daughter, Cathy Grantham, said the economy was too miserable to worry about race. "We need a change," said Grantham, 50, who works for a wealthy family near Winston-Salem and voted for Bush in 2000, the last time she bothered with Election Day. "I'm looking past color this year ... When he speaks, I think Obama thinks about what he's gonna say; he don't just blurt anything out [like McCain]." Some black North Carolinians, meanwhile, are a little skeptical of the polls. "People are trying to see what the white citizens -- what if they get behind the poll and close the curtains, I mean they say they're gonna vote for Obama, but what happens when they're actually in the poll?" said Raquel Edwards, 39, who works in accounting for a welding company in Greensboro, while she watched the North Carolina A&T parade. Watt didn't sound concerned about hidden racism affecting the vote. "Race is still a factor in some parts and in some minds, but you know, lots of things have changed," he said. "We don't need to change every one of them, but if we can change some of them, that's important."

For now, Republicans aren't panicking about McCain. Dole may be in serious trouble, but McCain may turn things around here, and the GOP could win the governor's race for the first time in years. "What's taken place up to now is a good wakeup call for Republicans," said Shumaker, Burr's consultant. But optimism has its limits, even in a state that has been as good to Republicans as North Carolina. Something needs to stop Obama's momentum here, or else there could be a landslide in the making. "Two weeks from today, if the same trend lines are in place, it'll be a very bad sign for all Republicans," Shumaker said.