How John McCain could still win

The odds are long for McCain, but this is no time for Democrats to embrace irrational exuberance. Here are four ways McCain might be able to turn it around. 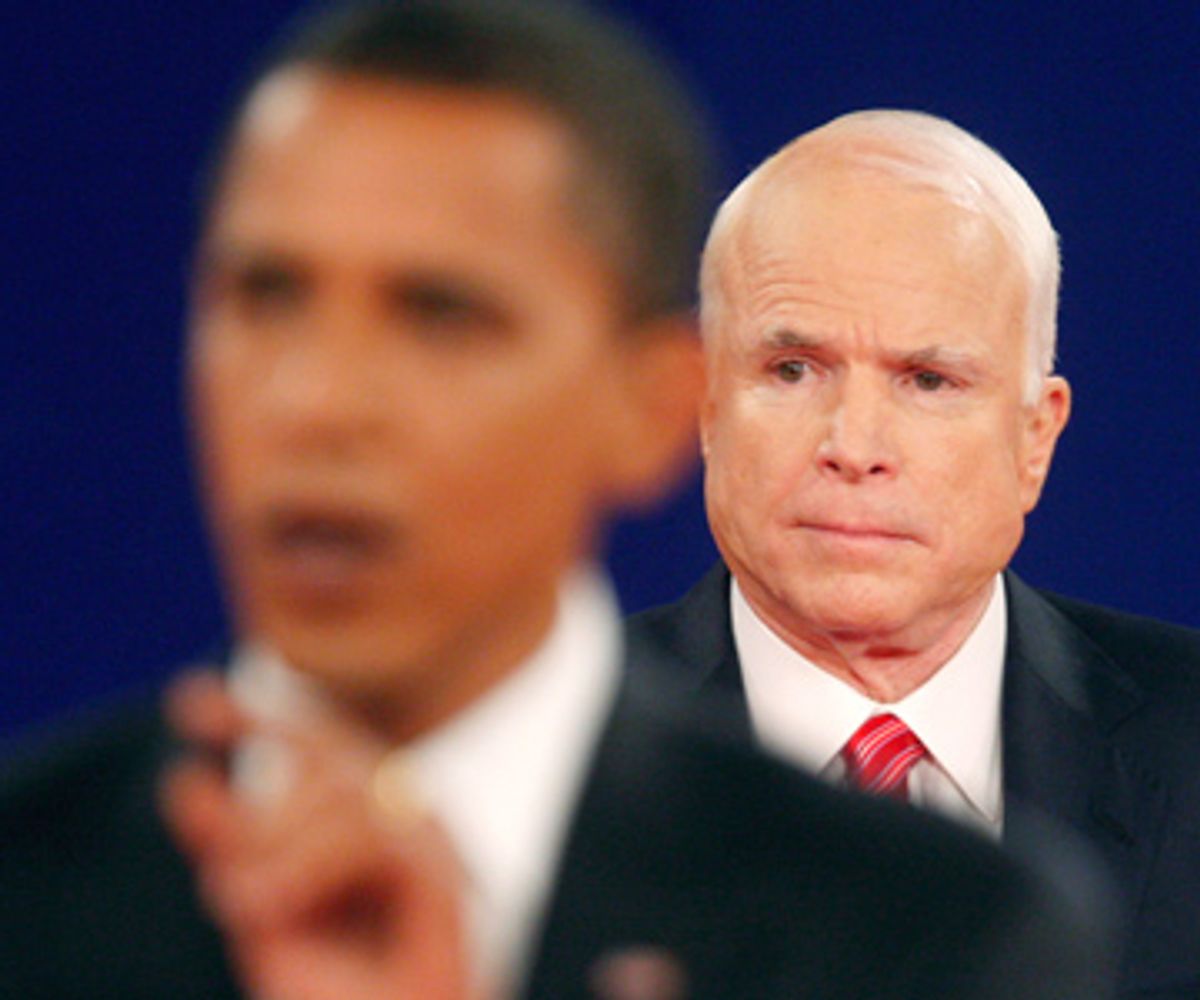 With Barack Obama holding a consistent 6-to-11 percentage-point lead in all recent national polls -- the stuff of an electoral vote landslide -- the 2008 campaign seems poised to enter its Harry Truman phase. That is the moment when John McCain, like virtually every losing candidate for more than half a century, invokes the ghost of "Give ’em hell, Harry" and the fading memories of a miracle 1948 electoral upset. About the only worse omen for McCain is when Republican talking points start to include the banalities of desperation like, "The only poll that matters is the one on Election Day."

Republicans are already starting to gird themselves for a Nov. 4 debacle. A front-page story in Sunday's New York Times featured GOP leaders lamenting the disarray in the McCain campaign. More ominous for McCain are the results of a secret-ballot survey by National Journal magazine of roughly 100 prominent Republican campaign consultants. Freed from the demands of on-the-record spin, 80 percent of these operatives admitted that it was highly likely that Obama would win the White House. The other 20 percent -- the cockeyed optimists of the GOP camp -- predicted that the election could go either way.

With McCain's prospects dwindling to a point where even Kansas and Oklahoma may soon be dubbed "swing states," the emerging conventional wisdom is that about the only uncertainty left in Campaign 2008 is the racial factor. That may explain why both the Sunday New York Times and the Washington Post ran prominent articles that grapple with the difficult-to-quantify "Bradley effect" -- the purported willingness of some white voters to tell pollsters they are voting for the black candidate when, in truth, they are closet racists unwilling to admit their prejudice. Named after California gubernatorial candidate Tom Bradley, who ran behind published polls in his 1982 Election Day defeat, this controversial phenomenon has become something of a political unicorn -- more often theorized about than actually sighted. Conversely, the telephone polls may also be undercounting the potential Obama margin, since it is difficult to survey younger voters who use only cellphones, and even elevated turnout estimates for African-Americans may err on the low side.

So is it all over but the shouting, as the next drama revolves around picking the Obama Cabinet? Even amid the current rush to electoral certainty, there are still valid reasons for Democrats to contain any irrational exuberance. Here are four factors (none of them based on race) that could still produce a long count on election night or even a McCain presidency.

The volatile voter. It takes a stout soul not to become mesmerized by polls and not to become beguiled into believing that current trends will continue until Election Day. But underdog candidates other than Truman have finished a campaign with dramatic closing kicks before, making up significant ground even without the aid of debate breakthroughs. The reason Hubert Humphrey (1968) and Gerald Ford (1976) are not considered patron saints by laggard candidates like McCain is that they both lost at the wire. Against the backdrop of Vietnam and the third-party candidacy of George Wallace, Humphrey came within 500,000 votes of overtaking Richard Nixon, even though he trailed by 44 to 36 percent in the Oct. 21 Gallup poll. Ford, saddled with the Nixon pardon, trailed Jimmy Carter by a jaw-dropping 62 to 29 percent margin in midsummer and was still behind by 11 percentage points in late September in the Gallup polls. Carter's victory margin turned out to be just 1.7 million votes and 27 votes in the Electoral College. With the shift of a few votes in Ohio and Wisconsin, Ford would've won.

Needless to say, the 1968 and 1976 elections played out in a more leisurely news environment, where most voters got their information from the nightly network news and the morning newspapers. In a YouTube era when even the smallest gaffe (like Sarah Palin daring to appear on ice in Philadelphia, the bitter-sports-fan capital of America) is magnified by constant repetition, it is ludicrous to believe that public opinion will be frozen in amber for the next 22 days. This notion is buttressed by the reality that most public pollsters try to push undecided voters into either the Obama or McCain categories, since no one likes a news headline that reads, "Uncertainty Reigns as Election Day Nears." Of the 13 national polls released this month, 11 showed the "undecided" vote in single digits. A CNN poll, conducted last week, strained credulity (and my own experience talking with voters in swing states like Wisconsin) by putting undecided voters at 2 percent.

The October surprise. Actually, the biggest surprise might be if the financial markets stopped roiling from now until the election. Hard to believe in retrospect that the big economic-panic issue of the summer was $4-a-gallon gasoline and $140-a-barrel oil. Had anyone dared to predict back then that prices would drop below $80 a barrel in mid-October, the glib assumption would have been that this economic turnabout would boost McCain. Instead, it is, of course, a reflection of a far graver crisis than the inflationary burdens of a $100 fill-up.

Seven years after 9/11, it seems both alarmist and in bad taste to speculate about the political fallout from a pre-election terrorist incident. But al-Qaida surprises can come in less lethal packages, such as the election eve 2004 Osama bin Laden tape that may have undermined John Kerry. After the first 2008 debate, in which Obama held his own though the advertised topic was foreign policy, it may be simplistic to believe that McCain automatically would benefit from a national security crisis. Still, if Whirlpool Week on Wall Street has taught the political world anything, it is that stuff happens that is unanticipated by any strategist, pundit or pollster.

Another McCain dice roll. The last time the self-described Arizona "maverick" tried to shake up the election, he melodramatically suspended his campaign to return to Washington to do virtually nothing to ease the financial crisis. This may, in hindsight, be remembered as the 48 hours in which McCain lost the White House, since the whole thing (down to the brinksmanship over participating in the first debate) struck many voters as a political stunt. McCain's prior desperation gambit -- the selection of a "you betcha" Alaska governor as his running mate -- also does not look like the stuff of lasting political genius.

But McCain still has a few gambits that he might try, especially if the alternative were a stinging defeat. Some Republicans wonder if the 72-year-old McCain should make an "I will serve only one term" pledge, so that as president he would be free of all political pressure (yeah, sure) in his effort to reform Washington and confront the deadly earmark crisis.

Even more dramatic (and more politically risky) would be a public repudiation of the presidency of George W. Bush. Such a statement would go beyond code words about leadership, offhand references to the tragedy of Hurricane Katrina and backward-looking attacks on Donald Rumsfeld's tenure as defense secretary. Of course, a full-throated attack on a president of one's own party is unprecedented during the fall campaign. And it would violate every canon of the Karl Rove playbook about never antagonizing the base (and Rove disciples in the McCain campaign like Steve Schmidt would probably have apoplexy). But it certainly would be a true maverick move -- and would suggest that McCain finally understands why Bush has an approval rating below 25 percent in most recent polls.

Know when to fold them.  There are Bush states that have slipped so far out of McCain's grasp that it is folly to waste time and money campaigning in them. The classic example is Iowa, a state that Obama has been organizing since early 2007 and that helped propel him to the nomination. But there were McCain and Palin Saturday in the river town of Davenport, rallying the faithful from both sides of the Mississippi (Obama's home state of Illinois lies on the opposite shore) in a classic lost cause.

But what if, confronted with his fast-fading fortunes, McCain dropped the hubris and concentrated his efforts on the battleground 2004 Bush states that he might still hold if everything broke right: Ohio, Indiana, Missouri, Virginia, North Carolina, Nevada, Colorado and Florida. That, of course, would leave McCain in a completely defensive posture -- and shy of 270 electoral votes, unless he could bring in, say, Pennsylvania, from the 2004 Kerry map. But it would be a way to stabilize his flight path as he came in for a landing (McCain style) on a wing and a prayer.

What polling mavens too often forget is that an election is not a computer simulation or a contest decided by the best use of regression analyses in analyzing published data. As a one-time event, all that is required is for a winning candidate to get lucky, very lucky, on Election Day. And a passionate embrace from Lady Luck is probably now the only way that John McCain will ever find himself behind the desk in the Oval Office.