Which John McCain will show up to debate?

With his campaign on the rocks, McCain could hit reset one more time and abandon civility in his final showdown with Barack Obama. 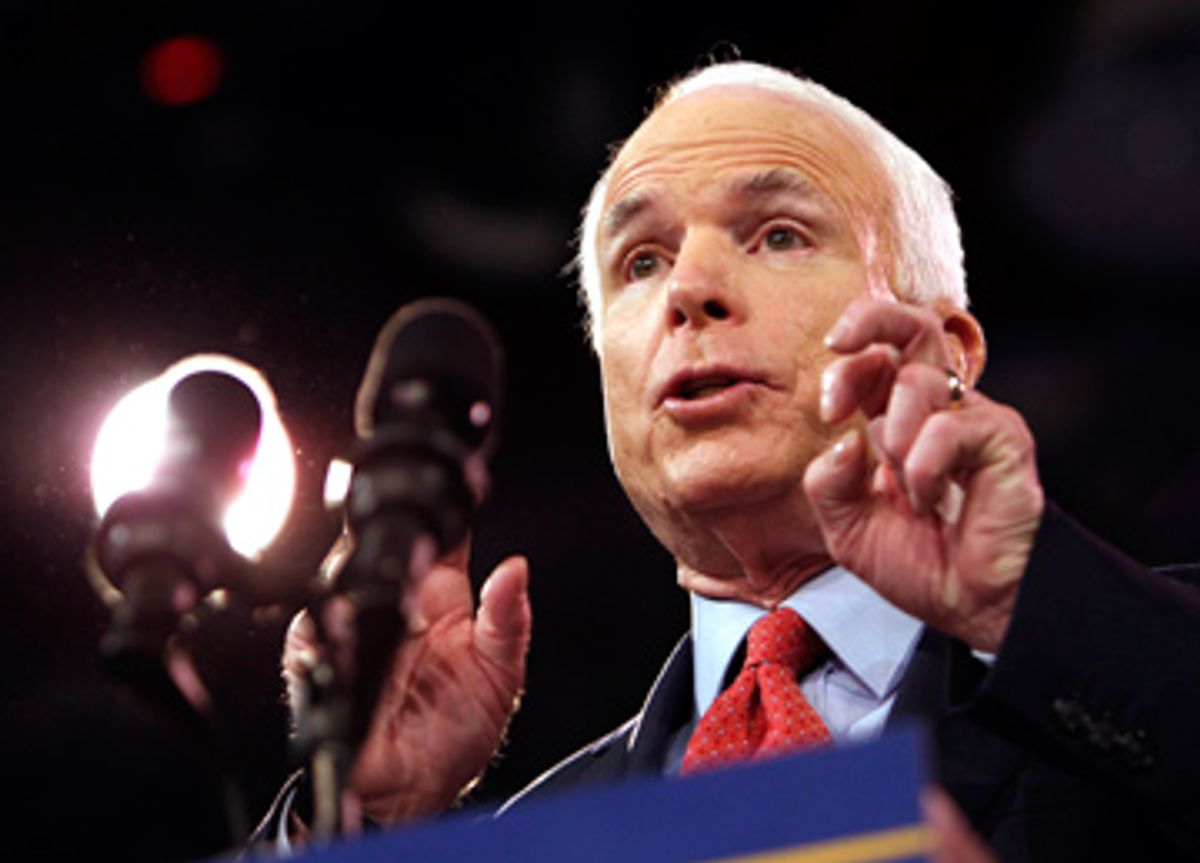 Yes, America, there is yet another new John McCain on the campaign trail now, after yet another campaign "reset" over the weekend (albeit one that didn't involve any melodramatic suspensions). This one promises to fight, and he pounds the podium as he says, "Yes, we will," a slogan that sounds strangely familiar. The new McCain, though, appears to have some of his supporters pining for the old version, the one who would bring up Bill Ayers and challenge his opponent's character more directly, asking, conspiratorially, "Who is Barack Obama?"

You know, the McCain from last week.

A day before the final presidential debate of the year -- and three weeks before Election Day -- McCain's campaign still seems to be struggling to figure out how to regain momentum in a race that, for him, has gone south faster than a retiree with a ticket to Florida. (That is, if the retiree still has any savings left to head south with.) McCain himself is sticking to a kindler, gentler stump speech that only impugns Obama's policies, not his personality, and his rallies are more carefully controlled by the campaign -- at least in part because polling found voters were starting to turn away from McCain, rather than Obama, because of McCain's sharp tone.

But aides haven't given up on the notion that voters would revolt against the Democrat if they only knew whom he's been hanging out with. "Obama did pal around with a terrorist," McCain staffer Michael Goldfarb wrote on the campaign's blog Tuesday, in a post that was also e-mailed to reporters. McCain's weird "Ambition" ad, with its campaign-finance-dictated leap from Ayers to "congressional liberals" (because its cost was split between McCain's campaign and the Republican National Committee), is still running all over the place; nearly all of McCain's TV ads are attacking Obama in similar fashion. And a day after McCain debuted his retooled stump speech, and only a few days after he rebuked his own supporters for taking anti-Obama vitriol past where McCain wanted it to be, he also promised the old McCain -- last week's McCain -- would make an appearance at Wednesday night's debate, with an attempt to highlight Ayers.

Which would be just fine with McCain's supporters who came out to see him Tuesday. "Who you associate with speaks volumes to what you believe," said Meggie Roddin, who owns a healthcare placement business in Norristown, Pa. "And Barack Obama has associated with people who clearly have indicated by their words and their actions that they are not for America. They are against America." Another supporter, Anne Matthews, a chemist from Jeffersonville, Pa., said she wanted McCain's whole speech to slam Obama. "I'm hoping to hear a good solid backup of why Obama is not what we need, of what's wrong with him and what he'll do to my child's future, and what he'll take from my parents and the contempt that that man has for the people in this room," she said. "The picture is there if you want to hear it, but I think [McCain] needs to drill it home."

Just then, a McCain campaign staffer came over to the fence that separated the press from the supporters and interrupted our conversation. "I'm sorry, guys, we're not actually -- we don't actually do interviews before or during the event, we do them after," she said. A volunteer had already chastised me for talking to another supporter, and shooed me down the fence to an area that seemed out of the way, and now the staffer was confirming the "no talking" policy. "If we let one person do that, then we have to let everyone, and it gets a little hectic, and we have to keep these areas clear," she said. "I'm sorry." (Of course, it turned out there wasn't time to go find people after the event, either, as the campaign quickly herded the national press onto a bus back to Philadelphia, pulling out so fast they accidentally left two reporters behind.)

That may be a new measure introduced by the campaign to reduce incidents of embarrassment-by-voter. Sometimes, in the presence of the media, the GOP base lashes out at McCain for not hammering Obama hard enough, which happened last week in Minnesota and Wisconsin. Sometimes the base lashes out at Obama in ways that make McCain and Palin look bad. On Tuesday, at a Palin rally north of here in Scranton, another McCain-Palin supporter called for the death of Barack Obama. In Blue Bell, unwilling to take a chance on off-message signs, the campaign distributed prefab ones for supporters to hold up, with bland slogans like, "Go McCain," "The maverick" and "Drill!" The crowd booed Obama, but no one seemed to yell out anything particularly nasty. For the second day in a row, an event billed as a town hall turned out to be just a speech, where McCain supporters couldn't take the mike and call Obama an Arab; this one was dominated by fairly detailed policy proposals on the economy. (That did produce the bizarre spectacle of the crowd fervently cheering McCain's plans to increase the amount of capital losses you can deduct on your taxes and to eliminate taxes on unemployment benefits -- which would surely only draw cheers in an economy as lousy as ours is now.)

But it's not clear the new McCain -- call it McCain version 2.2, since he already restarted his campaign last summer, then twice suspended it this fall in response to a hurricane and the economic collapse -- will resonate better with voters than the old one did. "I'm not as skeptical of this particular reset message as I am skeptical of the fact that it's about his 10th reset message over the last four months," said one Republican consultant who worked for a McCain rival in the primaries but supports McCain now. "Presidential campaigns are won with a devotion to the methodical, and unfortunately, this campaign is just a nonstop compilation of distractions about the trivial."

It's also not clear which tone McCain will try to take in the debate Wednesday night at Hofstra University. His promise to bring up Ayers -- apparently because Obama goaded him into it -- doesn't bode well for a high-minded discussion of the economy, the stated topic for the final debate. McCain is cramming in far more prep time  for these encounters than he ever did in the primaries (when aides actually stopped prepping ahead of time and switched to town hall meetings on debate days instead), which some supporters worry may not be helping him. The format of this debate, where both Obama and McCain will be seated at a table with the moderator, CBS' Bob Schieffer, ought to make harsh attacks even more awkward than in the last two debates -- he would be ripping the head off of a man with whom he's supposed to be sitting and having a faux-civil conversation.

McCain, in fact, is particularly bad at the sitting-and-having-a-polite-chat thing. In January, at a Republican debate in California, he taunted and mocked Mitt Romney all night, sitting right next to him at a table in the Reagan Presidential Library; the spectacle was enough to make you feel bad for Romney, who isn't the world's most sympathetic figure. Obama's advisors, looking ahead to the evening, don't believe that McCain will be able to conceal his contempt for his opponent, and expect his reactions -- while Obama and McCain are both in the same TV shot -- to repel independent voters who dislike negativity.

The problem for McCain, of course, is that if he doesn't swing for the fences, he will have lost what's almost certainly his last, best chance to change the dynamic of the election. All Obama needs to do is maintain the steady performance he showed at the first two debates -- even a tie, in an election where polls show Obama is on the verge of a national landslide, would help him. A good rule, for anyone scoring at home, might be this: If you find yourself bored while watching the debate, Obama is probably winning. But for McCain, a lot of fireworks, if he deploys them badly, might turn out to mean the same thing.