The Republican senator's final debate performance was marked by oddball characters and marginal attacks, as hopes of his political resurrection appeared to fade. 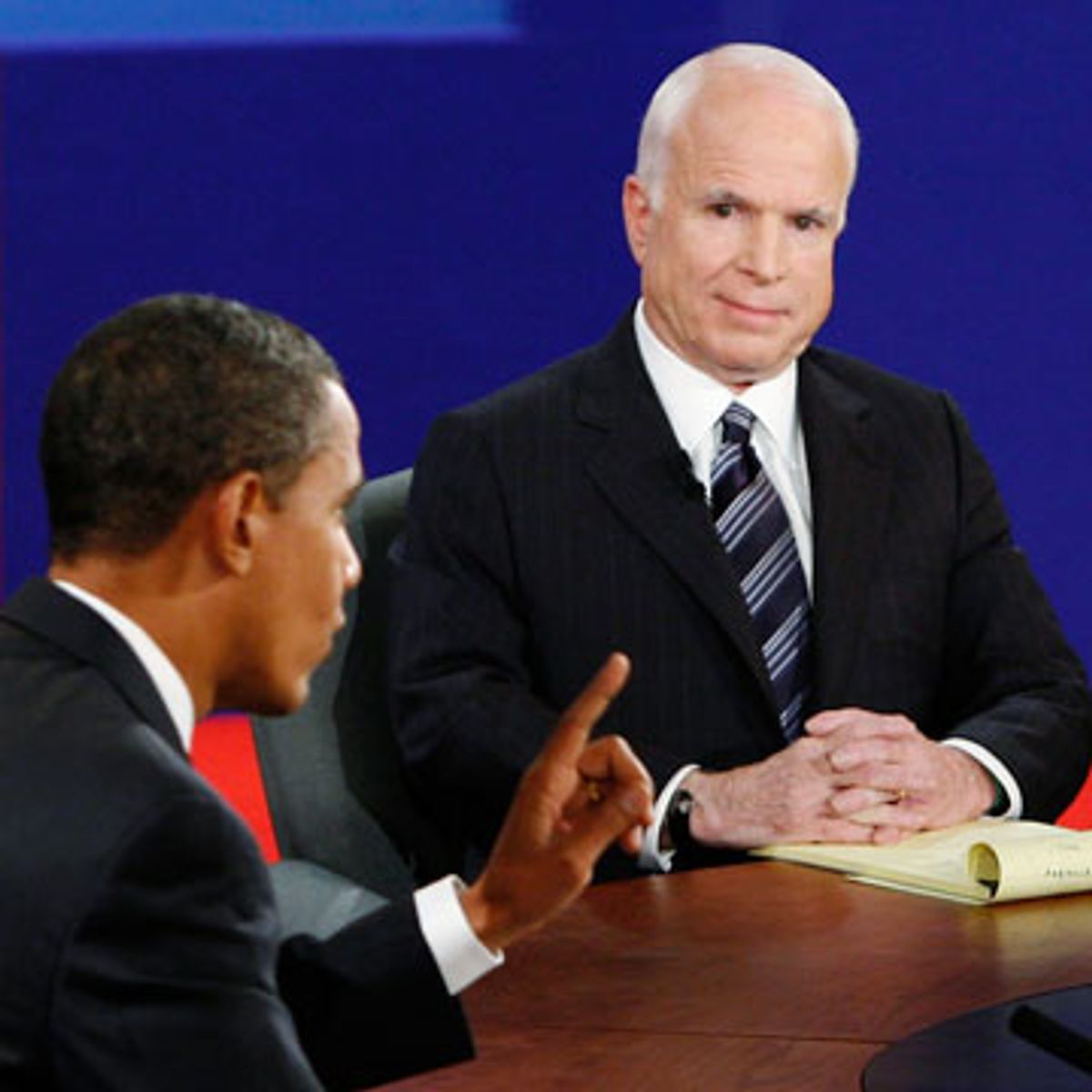 What may well have been the final debate of John McCain's political career featured oddball characters who seemed like refugees from "Sesame Street" -- Joe the Plumber (an Everyman from Ohio), Senator Government (a Freudian slip moniker for Barack Obama) and a sometimes petulant 72-year-old Republican trying to be Mac the Knife. While instant debate verdicts are always suspect, there was scant evidence that McCain, despite a strong showing during the first 45 minutes of the debate, landed a haymaker at Hofstra. As the debate clock wound down Wednesday night, along with McCain's hopes of political resurrection, the Arizona Republican ended by arguing with Obama over a nearly irrelevant issue at a time of economic crisis -- school vouchers.

The opening that McCain had been craving came early in the evening when Obama pointedly contrasted the Bill Clinton economic record (a budget surplus) with the scorecard on George W. Bush (doubling the national debt in eight years). "Sen. Obama, I am not President Bush," McCain declared. "If you wanted to run against President Bush, you should have run four years ago. I'm going to give a new direction to this economy in this country." McCain, to his credit, delivered the obviously rehearsed lines with conviction. But the Arizona senator then spoiled the moment by immediately veering off to talk about Obama's tax votes in Congress and the "completely out-of-control" budget.

Historians of the angry autumn of '08, when 700-point drops in the Dow Jones average became the new normal, will undoubtedly be fascinated to discover that Bill Ayers -- that blast-from-the-past 1960s Weatherman -- received far more debate airtime than Treasury Secretary Hank Paulson. (Neither Federal Reserve chairman Ben Bernanke nor his predecessor Alan Greenspan was ever mentioned, but, hey, who cares about the financial system anyway?) McCain, whose TV ads refer to Ayers more often than earmarks, backed into the subject gingerly, saying, "I don't care about an old washed-up terrorist." But seconds later, McCain was channeling his inner Richard Nixon as he demanded to know "the full extent of that relationship" between Obama and Ayers. (Obama's response was a reprise of his oft-stated position that he and Ayers had merely served on foundation boards together in Chicago.)

This was not a debate in which Obama had many lines destined for the sound-bite hall of fame, but the Democratic nominee did pull off an impressive smile of astonishment on the split-screen TV picture as McCain, without missing a beat, switched from berating Ayers to claiming "my campaign is about getting this economy back on track." Obama, who long ago learned that there is never a moment during a debate when a camera is not ready to record his expression, also contributed an amused laugh when McCain hyperbolically claimed that the left-leaning independent voter-registration group, ACORN, was on the verge "of destroying the fabric of democracy." Leading in the polls, with all the momentum going his way, Obama accomplished his simple but vital mission on Wednesday night -- don't make any blunders.

In late September, before the first debate, Bill McInturff, a McCain pollster, predicted that the contours of the race would not be known until a few days after the final debate when public opinion finally had a chance to settle. That is why McCain's fate will probably be dictated by whether the weekend polls tighten or Obama continues to flirt with a double-digit lead in the national surveys and state-by-state scenarios that could give him as many as 350 electoral votes. Unless McCain makes up ground quickly from either Wednesday's debate (unlikely but possible) or the simple force of gravity (Obama's outlandish lead comes back to earth), the Republican nominee will soon be facing a stark choice. Does he want to go out railing about Ayers and ACORN, or does he want to step back and play out his string as a principled conservative, the reputation he held before this down-and-dirty campaign?

Sitting with Obama at the round table at Hofstra -- actually it looked more like an old-fashioned partner's desk -- McCain tried to play it both ways. For all of his attack lines, there were also moments when viewers could glimpse the other McCain, the senator who excelled at working with Democrats. Asked about Supreme Court appointments, McCain spoke about his opposition to "litmus tests" and his votes to confirm Clinton appointees Ruth Bader Ginsburg and Stephen Breyer. But then McCain, perhaps remembering that it requires more than Sarah Palin to appease the conservative base, added that his search for "the best people in the world" would probably not include "someone who supported Roe v. Wade."

For his part, Obama carefully avoided spelling out any new detail about the real policy decisions that would confront him on Jan. 20, 2009, if the current polls hold up. Asked about the choice between expanding benefits and controlling healthcare costs as the federal deficit spirals out of control, Obama said, "We've got to do both -- and that's exactly what my plan does." Asked about whether American schools require more money or more reform, Obama gave the same both-sides-now answer when he said, "Now, typically, what's happened is that there's been a debate between more money or reform, and I think we need both."

All three 2008 presidential debates (not to mention the Palin-dominated circus) had a time-warp quality about them. There was never a sustained discussion by either candidate about how the Wall Street whirlpool had totally transformed the domestic agenda of the next president. At a point when the government is taking ownership stakes in the nation’s leading banks, it seemed comically irrelevant to have an old-fashioned political scrap over whether Obama’s plans would put Joe the Plumber in a higher tax bracket. Somehow the phrase "class warfare" brandished by McCain takes on a new meaning when Wall Street gamesmanship appears to have thrown the entire economy into a severe recession.

Obama met the now-famous Joe the Plumber (aka Joe Wurzelbacher) in Springfield Township, Ohio, earlier this week as he was shaking hands between rounds of debate prep. Wurzelbacher challenged Obama on his tax plan so vigorously that Obama said afterward, "I've got to go prepare for this debate, but that was pretty good practice." It was practice that came in handy Wednesday night as Obama probably deprived McCain of his best last chance to turn Campaign 2008 back into a horse race.