Banking on early votes for Barack

How the Obama campaign is aiming to turn out early voters, and why it could be crucial for Election Day. 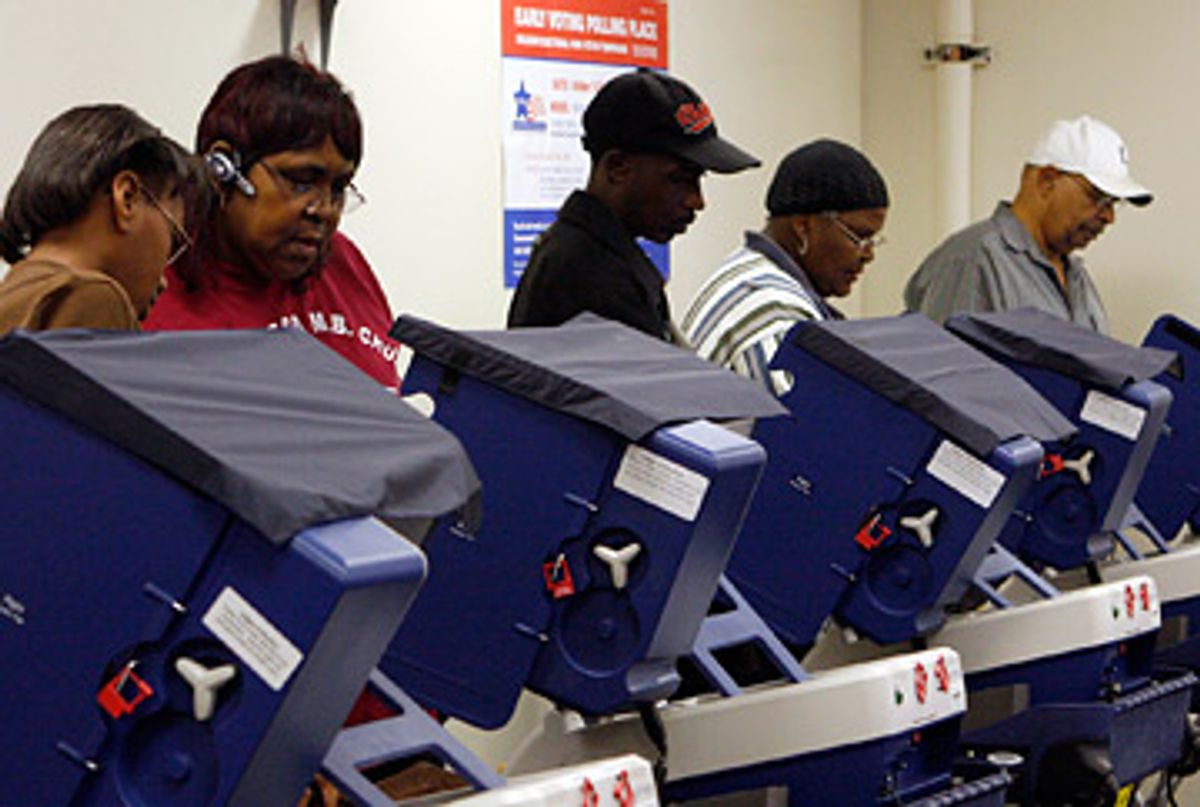 Mel Watt had a pretty simple message as he marched in the North Carolina A&T University homecoming parade last weekend. "Morning! Vote early! Avoid the rush!" the seven-term member of Congress called out. Watt didn't even bother saying whom to vote for; the crowd at the parade, many of them his constituents, were all pretty excited about the whole Democratic ticket in North Carolina, from Barack Obama on down. Watt's only goal was to get them to bank their votes well before Nov. 4. "Avoid the rush! Vote early!"

Early voting in North Carolina started Thursday; it's one of 31 states (plus the District of Columbia) that allow voters to cast ballots in person ahead of time without providing election officials with a reason they can't be there on Election Day. Which means that as both presidential campaigns shift from registering voters to getting out the vote, the election has actually already started. As much as 30 percent of the votes cast this fall will probably come in before Nov. 4, according to the National Association of Secretaries of State.

In some battleground states, such as New Mexico, Nevada, Colorado and Florida, that number could be even higher -- up to 50 percent or more, aides to Obama and to John McCain said. On the first day of early voting in North Carolina, early-vote locations were swamped. (One library in Charlotte reported waits of up to two hours.) New Mexico Democratic Party chairman Brian Colón expects close to half the electorate to have voted  by Election Day. In Georgia, where Obama's campaign is apparently considering trying to compete again, more than half a million people have already voted; 210,000 of them were African-American, an encouraging sign to Democrats. Operatives in both campaigns expect a spike in early voting as it begins in states that allow it, then for it to subside for a little while, then spike again as the deadline approaches.

Both McCain and Obama are focusing on early voting, but with a surge of new voters expected to hit ballot booths on Election Day -- mostly to support Obama -- Democrats are putting  more effort than ever before into getting their supporters in ahead of time. "We are devoting our entire field operation to making sure that people are voting early," said Obama's campaign manager, David Plouffe.

In past elections, Democratic candidates sent absentee ballot applications or mailers urging an early vote to their most passionate, reliable supporters. That helped bank a decent number of votes ahead of time, but it also meant that the get-out-the-vote work on Election Day was that much harder, because the people who needed more encouragement to actually head to the polls did not become the campaign's focus until the last minute. "When it comes to our efforts on the ground, at the door, on the phones ... we [now] tend to aim those efforts at our supporters who have the weakest voting history," said Jon Carson, Obama's national field director.

Part of how they're doing that is with a Web site, VoteforChange.com, which lets supporters type in their address and find out polling places, registration deadlines and early vote dates. (Of course, they also have to type in their name and e-mail address, putting them in the campaign's massive database.) But in states that have started voting already, the volunteers and field staffers who spent the past year contacting and identifying supporters are now also getting out and reminding them to vote early. "If it's your neighbor knocking on your door or giving you a phone call and saying, 'Hey I'm going to go vote on Tuesday,' then it's that much more effective," Carson said.

Republicans, who have long been more adept than Democrats at getting supporters to vote absentee and early, were already doing the same thing. Early voting "cuts down your GOTV [get out the vote] universe on Election Day," said Rich Beeson, the political director for the Republican National Committee, which oversees McCain's turnout operation through its Victory committee. "In these states, we aren't talking to the entire turnout universe, we're talking to just the people who haven't gone out to vote yet." The GOP has a national database of its own; each night workers upload information from state and county officials on who has voted early so aides know they don't need to keep reaching out to them. (Carson said Obama's organization is also tracking that information.)

Democrats are also pushing election officials in battleground states to add more early voting locations and to expand the hours when people can cast ballots -- which may have an important strategic purpose. More than 5 million new voters registered this year in battleground states; if they all try to show up at once on Nov. 4, segments of the electoral system could be overwhelmed.

Particularly in states with no early voting, that could pose a serious problem. "All of the turnout has to arrive at the same time," said Ken Smukler, a Democratic consultant who works on voter turnout in Philadelphia, in a state where you can only vote absentee with a justification such as a work conflict, illness or travel. "The [election] infrastructure is not prepared to handle it." Though early voting means more work for election officials, who have to staff polling places and stock ballots weeks before Election Day, if it eases the crunch next month, they won't mind. "Election Day has morphed into election season," said Kay Stimson, spokeswoman for the National Association of Secretaries of State.

Some voting rights advocates, though, worry that even a steady tide of early ballots won't ease the pressure on Election Day. "You're still going to have these issues on Election Day," said Jonah Goldman, who runs the election protection division of the Lawyers' Committee for Civil Rights. "The uptick in early voting -- I don't think that’s going to eliminate the problems at the polls."

Some instances of early voting so far may be an indication. In Georgia, voters have waited hours to cast ballots in the last few weeks. In North Carolina on Thursday, wait times ranged from 15 or 20 minutes to a few hours. "Our lines went throughout the building," said Sarah Poole, a spokeswoman for the public library system in Charlotte and Mecklenburg County, N.C., where polling places have been set up in several branches. "It's nothing like it was four years ago."

For Democrats, in this race there may well be an additional benefit to wide early voting turnout: The polls currently show Obama winning by big margins in state after state. There's no risk of McCain recovering some momentum if people's votes are locked up now. And in an election with as many ups and downs as this one has had, those banked votes could come in quite handy indeed.