The week in indie film, from the gorgeous animation of "Azur & Asmar" to Wayne Wang's edgy YouTube release to the quest for Bigfoot -- in Ohio. 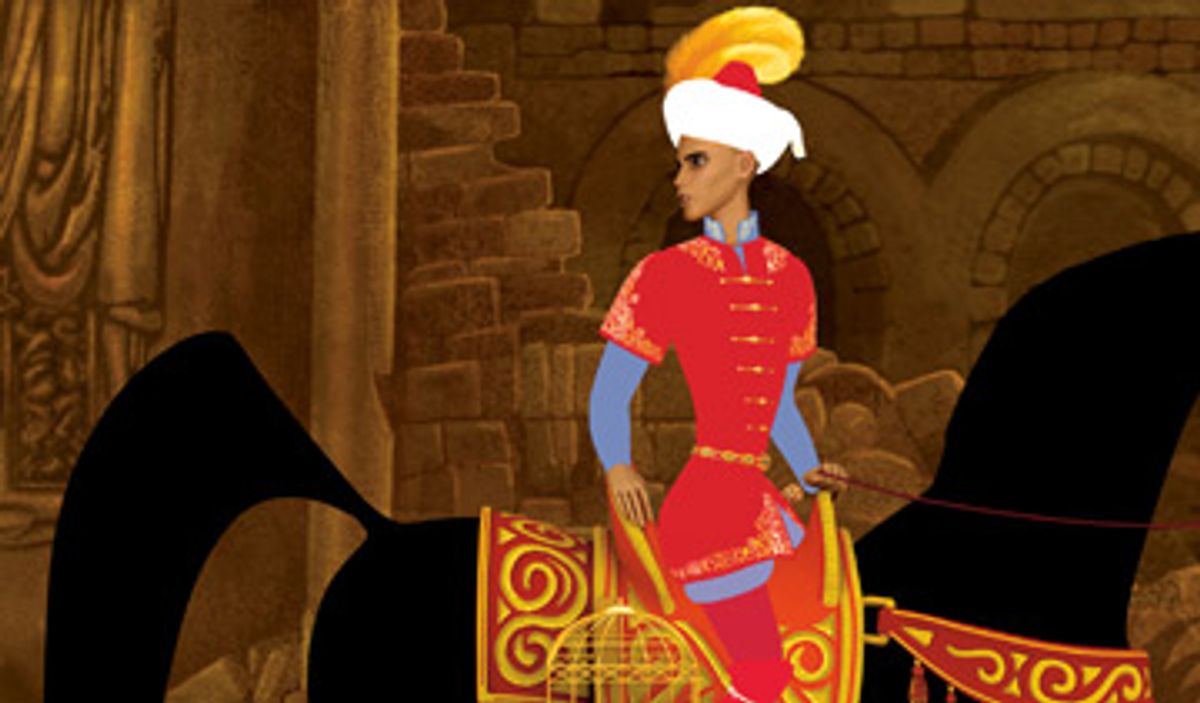 With the release of Oliver Stone's "W." (my verdict: fascinating, wonderfully acted, kind of a slog and lacking in sleazy delights) and "The Secret Life of Bees," I believe, God help us, that this weekend marks the unofficial beginning of awards season. Mind you, I'm aware that other people aren't thinking about that yet. Isn't there some other big event coming up around the beginning of November? Something that Stone's movie kept dimly calling to mind? A new reality show that pits Joe the Plumber against Bill Ayers, maybe? Presumably you don't come here expecting me to be up to speed on all that oh-so-important hard-news stuff.

Here's what I do know: The indie-oriented, New York-based Gotham Awards -- always first out of the gate -- will announce their nominations on Monday, and I'll be all over it in due course. Meanwhile there's the usual onslaught of hopeless but lovable little motion pictures, stopping off briefly in theaters on their way to Blu-ray or iTunes or ZambleWick or whatever new distribution nodes will be invented in the next few months. Here's this week's guide, which includes the year's most beautiful animated film (says me) along with an experimental new venture from an '80s indie pioneer.

"Azur & Asmar" Even listing this impossibly gorgeous medieval fairytale adventure from master French animator Michel Ocelot ("Kirikou and the Sorceress") is unfair, because hardly anyone can see it. The film doesn't have anything resembling real United States distribution, but the New York International Children's Film Festival is presenting a week-long run at the IFC Center in Manhattan. As usual with Ocelot's films, I resisted the predictable lessons on ethnic and cultural tolerance for a while, but only until the sheer storybook rapture swept me away.

Fair-skinned Azur and dark-skinned Asmar are raised as near-brothers by Asmar's mother, who tells them stories of her faraway homeland and its beautiful, imprisoned Fairy Djinn. Long after their brutal separation, adult Azur goes in search of this exotic country and his old friend, who has grown up into a valiant horseman. A moderate level of violence, and Azur's somewhat harrowing ordeals, might make this tough viewing for kids younger than 7 or 8 -- but when "Azur & Asmar" reaches DVD, it's a sure bet for the next update of my Awesome Kids Video Project.

"The Princess of Nebraska" Nobody ever gets to be the first anything on the Internet, and Wayne Wang's new no-budget drama shot with consumer-grade video equipment certainly isn't the first feature film made available online. It is, however, the first full-length film by a name director to have its original release on YouTube -- the link above will take you there -- and that feels like a Rubicon-crossing moment. Expect more, a lot more. I'm currently road-testing several different Internet-distribution platforms for feature films, and I'll have a further report in a week or so.

Something of a companion piece to Wang's recent Magnolia Pictures release "A Thousand Years of Good Wishes," -- both films are based on short stories by Chinese-born writer Yiyun Li -- "Princess of Nebraska" is an angrier, darker, messier film with an ambiguous and not exceedingly likable protagonist. Sasha (the terrific Ling Li) is a Chinese immigrant college student who travels from Omaha to San Francisco in search of an abortion, or in search of her lover's other lover (who is both male and white), or just in search of escape, which she finds with a debauched late-night adventure with a karaoke-bar hostess named X (Pamelyn Chee). I'm a longtime admirer and acquaintance of Wang's, but I really dig this movie. It's only on YouTube for a week, in hopes that the exposure and publicity will produce a TV and DVD deal.

"Not Your Typical Bigfoot Movie" Screw Joe the Plumber. If Barry and J-Mac want to learn about the heartland, they need to check out this slice of direst, deepest dead-end Americana from the Appalachian foothills. Ostensibly a documentary about two middle-aged guys who believe, or claim to believe, that they've taken photos of Bigfoot, Jay Delaney's documentary is really a gut-wrenching portrait of friendship, poverty and near-total desperation in a forgotten Ohio steel town. OK, I know: You're confused. Bigfoot? In or around Portsmouth, Ohio? I had some problems with that too. Well, here's the evidence. As the finest minds in journalism say, we report. You decide. Playing this week at the Pioneer Theater in New York.

"FrontRunners" I don't share much of the endless cultural fascination with teenage manners and mores, but veteran TV producer Caroline Suh's documentary about the student-body president election at Manhattan's ultra-competitive Stuyvesant High School has an undeniable, chocolate-level irresistibility. Life at Stuy-High is both normal and exceedingly not so -- the kids are morbidly obsessed with getting into high-status colleges -- and the election seems like a funhouse-mirror reflection of American politics in the larger society. Race and gender play critical roles in the election, for instance, but the dominant ethnicity at Stuyvesant is Asian, and the dominant gender is female. (In other words, without an Asian girl on the ticket, don't bother running.) In leading candidates Michael Zaytsev and George Zisiadis, Suh definitely finds two of the weirdest documentary protagonists of recent years. What's wrong with these people who want to be president so badly? (Now playing at Film Forum in New York. Opens Oct. 24 in Boston, Denver, Los Angeles, Philadelphia and San Francisco.)