Democrats are furious over Joe Lieberman's cheerleading for McCain-Palin. But would punishing the powerful senator be a smart move? 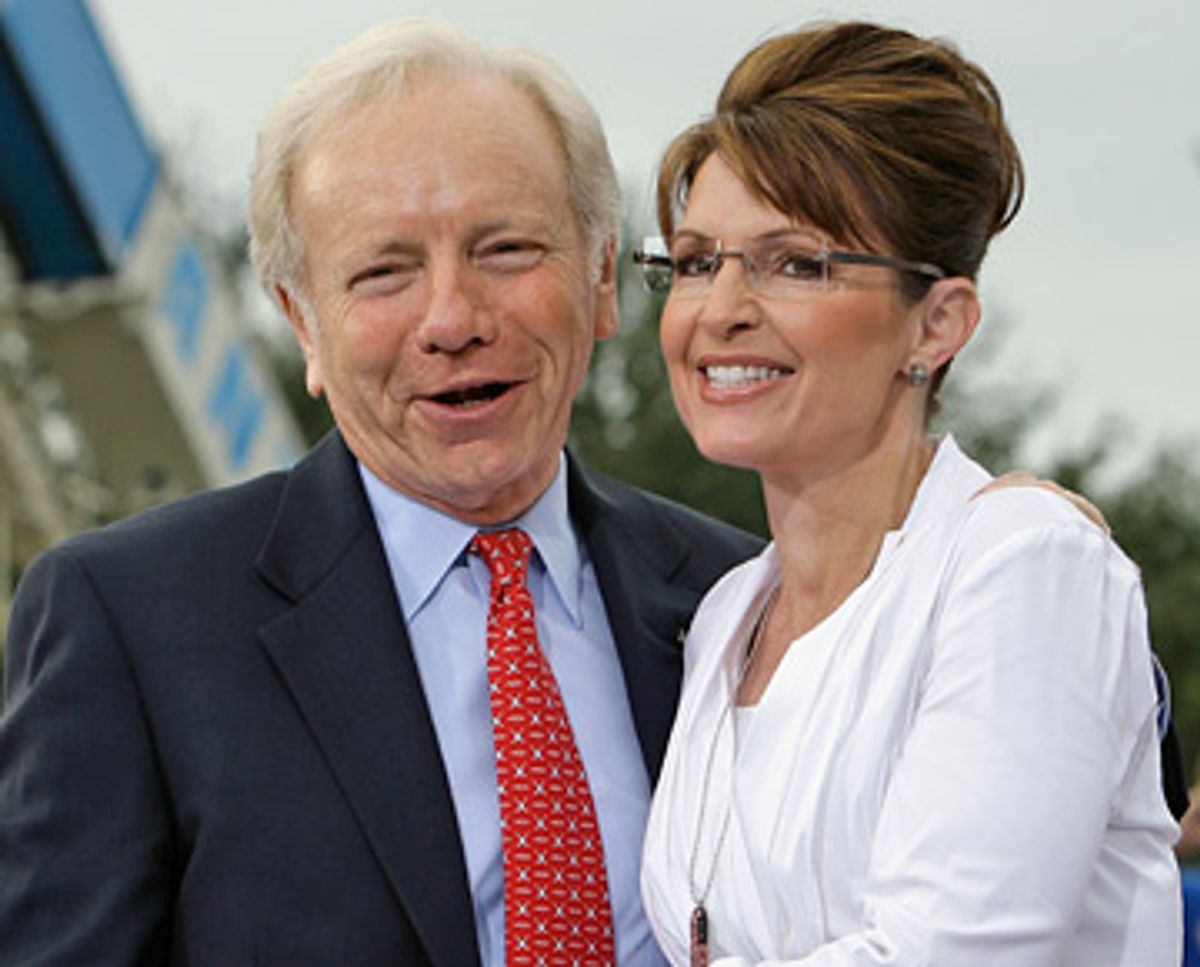 Joe Lieberman has gone to some pretty far lengths on behalf of John McCain this year, but even for him, this past Sunday morning must have been tough. As Lieberman shepherded his pal through a "virtual town hall" teleconference with Jewish supporters, McCain found himself defending — as he often does these days — his running mate, Sarah Palin. At one point he decided to toss the question to Lieberman: "I'd love for Joe to — are you still there Joe? — weigh in on this, because he's been to a lot of the rallies," McCain said. "Go ahead, Joe."

And so it fell to Lieberman, who might well have been McCain's number 2 if not for threats of a conservative revolt in the Republican Party, to talk up the hockey mom who presumably took his place on the ticket. "She's touched something very, very positive and optimistic," Lieberman intoned. "Part of it is exactly what John had in mind when he chose her: This is a typical, capable, middle-class American woman who didn't like what her government was doing, and instead of just complaining about it, ran for the city council, got to be mayor, ran against the incumbent Republican governor, got to be governor." (It may be a measure of how far Lieberman has strayed from his Democratic past that he didn't mention his own unique perspective on what it takes to be a vice presidential candidate.)

By the time Washington settles down to look at the election results next month, there may not be many more lines left for Lieberman to cross. Endorse the GOP nominee? Check. Blast Barack Obama at the Republican National Convention? Check. Defend embattled Republican incumbent Norm Coleman of Minnesota in one of the country's most contested Senate races? Check. Yet, despite all that, top Senate Democrats like Harry Reid still aren't willing to say they'll kick Lieberman out of the caucus next year. In fact, they're still not willing to say they'll move against Lieberman at all, even if things break their way and the party winds up in control of more than 60 seats. "We truly are in a spot where [Reid] will talk to the members of the caucus after the elections about what — if anything — to do," said Jim Manley, Reid's spokesman, regarding Lieberman's role. (Since becoming an Independent, Lieberman has continued to caucus with Democrats in the Senate and regularly votes their way on domestic policy.) "We're going to have to wait and see how this thing plays out."

Lieberman's future is partly a question of math — as in, will Democrats win enough Senate seats to gain a filibuster-proof 60-vote majority, and if they do, will Lieberman represent that 60th vote? But it's also partly a question of clubby intangibles inside the Senate. The guy may have irritated a lot of liberals in 2008, and even a lot of Democrats in the Senate, but he's been on Capitol Hill for 20 years, and, although people may wish they could forget it now, he was on the party's national ticket in 2000. In the end, how far will longtime friends want to push him to hold him accountable for supporting McCain?

What isn't in doubt is how fervently Lieberman has been out there pushing the Republican ticket. He hops on and off McCain's campaign plane and bus constantly these days, in between trips to suburban areas in swing states with lots of Jewish voters — south Florida, the Philly suburbs, the Cleveland area. During Sunday's tele-town hall, he tried to make the case that McCain is the real heir to the legacy of Bill Clinton. "The eight Clinton years were good years, but the Democratic Party is not where it was eight years ago on a lot of issues," Lieberman said, citing trade and "government reform," without specifying exactly what that is. Addressing McCain, he continued: "You are more in that tradition on those issues than a lot of the Democrats are today." (McCain may be pretty sure he's not George Bush, but he didn't sound like he wants to be Bill Clinton, either. "Yeah," he muttered. "Next question, please.")

This kind of shtick is what drives many Democrats crazy. "I think that Sen. Lieberman feels much more comfortable in the Republican Party," said Ned Lamont, who beat Lieberman in Connecticut's Democratic primary race for the Senate in 2006, but then lost the general election when Lieberman ran as an independent. "I got in the race two and a half years ago because I thought he had left a lot of Democratic principles a long time ago." Blogger and activist David Sirota says he hopes Reid and other leaders will punish Lieberman: "I hope that there is some personal animus toward the guy."

Lieberman's friends, however, say they don't think he's worried about the future. "Joe's position is, this is free speech," said John Droney, a former Connecticut Democratic Party chairman who is one of Lieberman's close backers (though Droney supports Obama for president). Droney said Lieberman basically figures "if you want to come and get me for helping a friend, for doing what I thought was in the best interest of my country, for putting principle ahead of politics, well, then go ahead." It's clear where Droney's sympathy lies, even if he disagrees with Lieberman on who belongs in the White House. "When the crowd of enraged liberals — still flushed with an Obama victory, if such is to be the case — show up at the Capitol with pitchforks and lanterns demanding that [Lieberman] be thrown off the Rotunda, then the people in the Senate are going to have to decide" what to do, he said.

What seems likely both to Lieberman's defenders and his attackers is that he'll lose the chairmanship of the Senate Committee on Homeland Security and Governmental Affairs. "My suspicion is that he fully expects to lose his chairmanship as retribution for speaking at the convention," one former advisor said. "Knowing him, he's a grown-up, and he made this decision and he knew the consequences of it." Keeping him in the post could be a real problem for an Obama administration; if Lieberman wanted to stir up trouble, he could launch investigation after investigation, with support from Republican members of the panel, even though the Democrats have big majorities in the House and Senate. "Lieberman is a lot of things, and one of the things he is is a media whore," Sirota said. "You combine his need for attention with his, I would say, pretty vitriolic anger towards Barack Obama, and you take those two things and empower him with the committee chairmanship whose major function is to investigate an administration, and you've got a pretty nasty brew there."

But booting him from the caucus altogether is another story. For one thing, he's already skipped most meetings of Senate Democrats this fall — he's effectively taken himself out of the caucus anyway. On Sunday's call, he referred to himself as an Independent, not a Democrat. And while punishing Lieberman would please the party's base, if the leadership needs his vote, that could be counterproductive. "The need to satisfy Daily Kos is not as important as making sure you have the votes you need," said a consultant close to some Senate Democratic leaders. Voters might not be that impressed by punishing Lieberman, either. "At the end of the day, who gives a shit if Joe Lieberman is allowed to be chairman or do X, Y and Z for the Democrats? People care about if there's going to be an effort to get them healthcare, and do something about energy and all that ... It might be gratifying in the short term to get him, but in the long run what does it really get you?"

Whatever happens, Lieberman is surely destined for the political trivia books, considering how quickly he went from Al Gore's running mate to John McCain's best buddy. Lieberman's spokesman, Marshall Wittmann (who once worked for McCain), wouldn't comment on his future beyond saying, in an e-mail to Salon, that his boss was only focusing on "helping to elect John McCain" and not "post-election Washington politics." On Sunday, closing out the "town hall" conference call, Lieberman suggested there was more at stake in the election than whether McCain wins and Lieberman gets to be secretary of defense. "What is on the line," he said, "is no less than the future of our families and our values and everything we care about."