Rays vs. Phillies? Who cares?

You should, imaginary person who asked that question. The World Series is exciting and new and different this year. 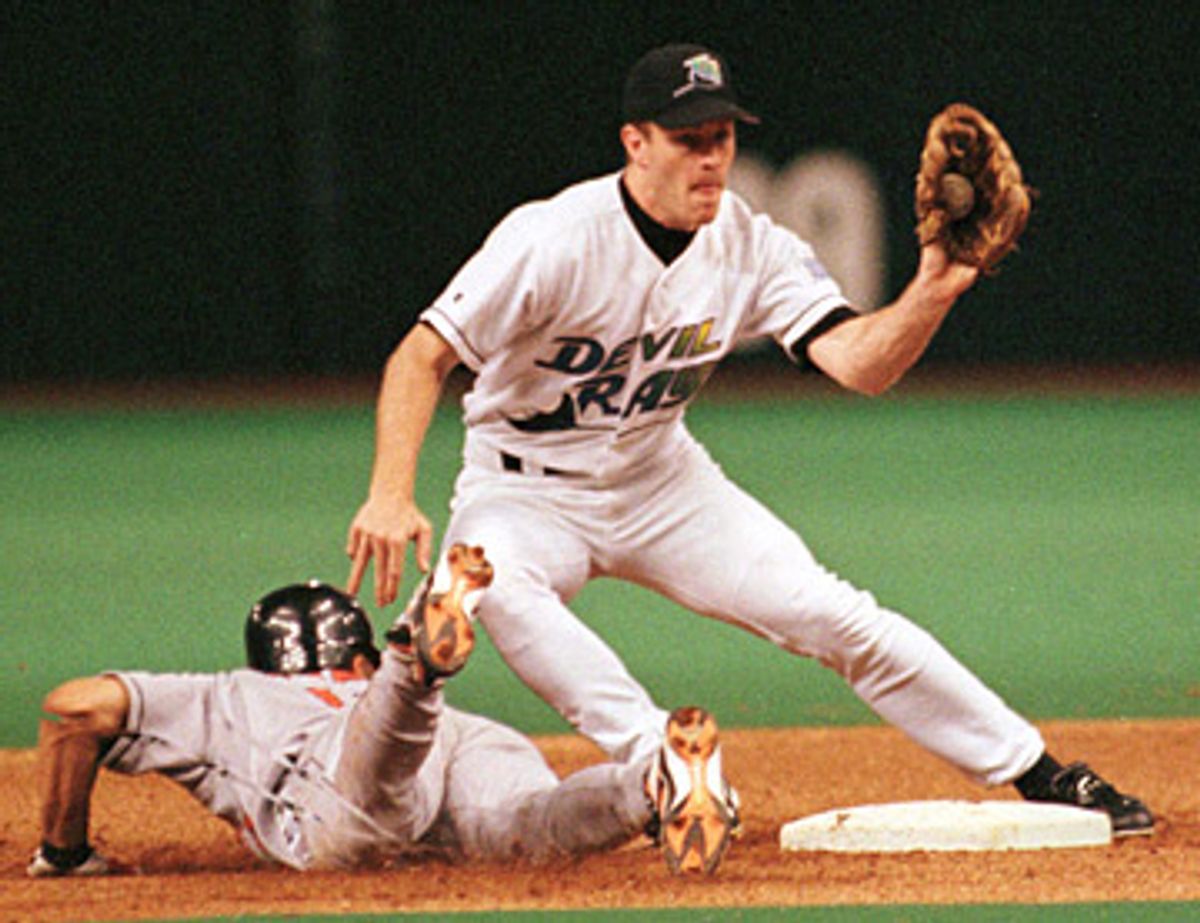 Let's go to the old imaginary mailbag for a question from our favorite dedicated, loyal, good-looking and completely fictional reader.

I'm glad you asked that question, Gerald. It's uncanny how your letter leads me into the precise subject I wanted to talk about today. Also, I like how you string together four words in a row that start with the letter I. It isn't intentional, is it?

As Maury Brown, whom I did not invent, points out on the Business of Baseball, Major League Baseball and its broadcast partners have fostered your attitude by tirelessly pimping the Yankees and Red Sox and, to a lesser extent, their aforementioned National League counterparts.

"Understandably, you have America hooked on the Red Sox and Yankees, and with that you get your precious regular-season ratings," Brown writes, addressing Fox, ESPN and TBS. "The problem is, if one or the other isn't in the World Series and ratings are low, there's a mountain of articles talking about how it's a matter of being a 'poor Series.'

Indeed. There's nothing inherently more fascinating about the Red Sox or Yankees than about any other team unless one of them is your hometown nine, though this column acknowledges that counting New England as Boston's hometown, those are a couple of big towns.

But there are just as many compelling stories and interesting players — if not more of both — wearing Phillies and Rays rompers. You just haven't spent the last five or 12 years hanging out with them every October. In fact, that makes them more interesting. How many more times do you need to hear about Big Papi's legendary clubhouse presence or Terry Francona's mentschlekhkeyt or Jonathan Papelbon's odd combination of goofiness and cockiness?

There isn't any particular reason why the Phillies, who own the largest unshared market in the major leagues, couldn't become an Evil Empire of their own over the next decade, though it isn't likely. It's never likely. But for now, they're still the sad-sack Phillies, the franchise that last year lost its 10,000th game, more than any other professional team in any sport, except for that obscure sport someone's about to start writing an e-mail about.

In the last generation or two the Phillies have been just another not-very-successful team, with a World Series win in 1980, losses in 1983 and '93 and some cycles of success and failure, most notably the Mike Schmidt-Steve Carlton high period of 1976-'83, when they won the N.L. East six times in eight years, and the low of the playoff drought that followed the '93 pennant and ended last year.

But before 1980 they'd been to the World Series only twice, in 1915 and 1950, losing both times. In between 1915 and 1980 the Red Sox went to five World Series, the Cubs went to six. The White Sox and Indians both went to three. For the bulk of the 20th century, then, all of the most famously futile franchises in the majors had more success than the Phillies, who still have just the one championship, 28 years ago. That's one fewer than the Florida Marlins, who have existed for a little more than half that time.

The Tampa Bay Rays haven't even existed for as long as the Marlins, but in their first 10 years they finished in last place every year except the year they finished next to last. Even the 1969 Mets had finished out of the cellar twice before, and they'd only been around for seven years.

How is any of this less compelling than the long wait for fans of the Cubs and Red Sox, Gerald?

And the Phillies play in a city where nobody else wins either. No Philly team has won a championship since the 76ers in 1983.

Chicago fans have had the Cubs and White Sox but also Michael Jordan, six titles by the Bulls and a Super Bowl win by the Bears. Boston fans had the long-suffering Red Sox but also an NBA Evil Empire, the Celtics, and one in the NFL, the Patriots. When Boston was finally, finally, finally able to celebrate a Red Sox championship in 2004, they first had to sweep aside litter from the Patriots' latest Super Bowl parade.

You should care about the Rays vs. the Phillies, Gerald, because the Red Sox returned home to Boston after Sunday's loss to the Rays in Florida and were greeted by ... nobody. No fans turned out at the airport to greet the heroic team that had given New England fans a thrill, almost pulling off a comeback that might have been greater than their famous 2004 rally to beat the Yankees.

This team roared back to win Game 5, then won a hard-fought Game 6 to force Sunday's decider. The Sox battled to the end, but lost with the tying run at the plate. And for that, Red Sox Nation, those noble lovers of the hometown team through eight decades of heartbreak and misery and poetry and doom, Red Sox nation said, "Don't come home from losing with loving on your mind."

Can you imagine the greeting that would have awaited the Rays if they'd flown home from Boston losers in the ALCS? There would have been a crowd at the airport with signs saying things like "Thank you 2008 Rays!"

Wait, no. It's not. And is it because they're better baseball fans than those Northerners? Certainly history would tell us otherwise. It's because Rays fans aren't used to winning. Shoot, they aren't even used to being Rays fans. But the club put a charge in them. The Rays, like the Phillies, are exciting and new and different.

And besides, their uniforms aren't hideous anymore.

Not a World Series without the Yankees or Red Sox? It's not like the usual suspects have been serving up exciting Series lately. The last one that went beyond five games was in 2003. Let the Rays and Phillies put a charge into you too.