Bob the Banker speaks out

In an exclusive interview, Joe the Plumber's big brother reveals why Obama's plan to "spread the wealth" will turn America into a socialist hell. 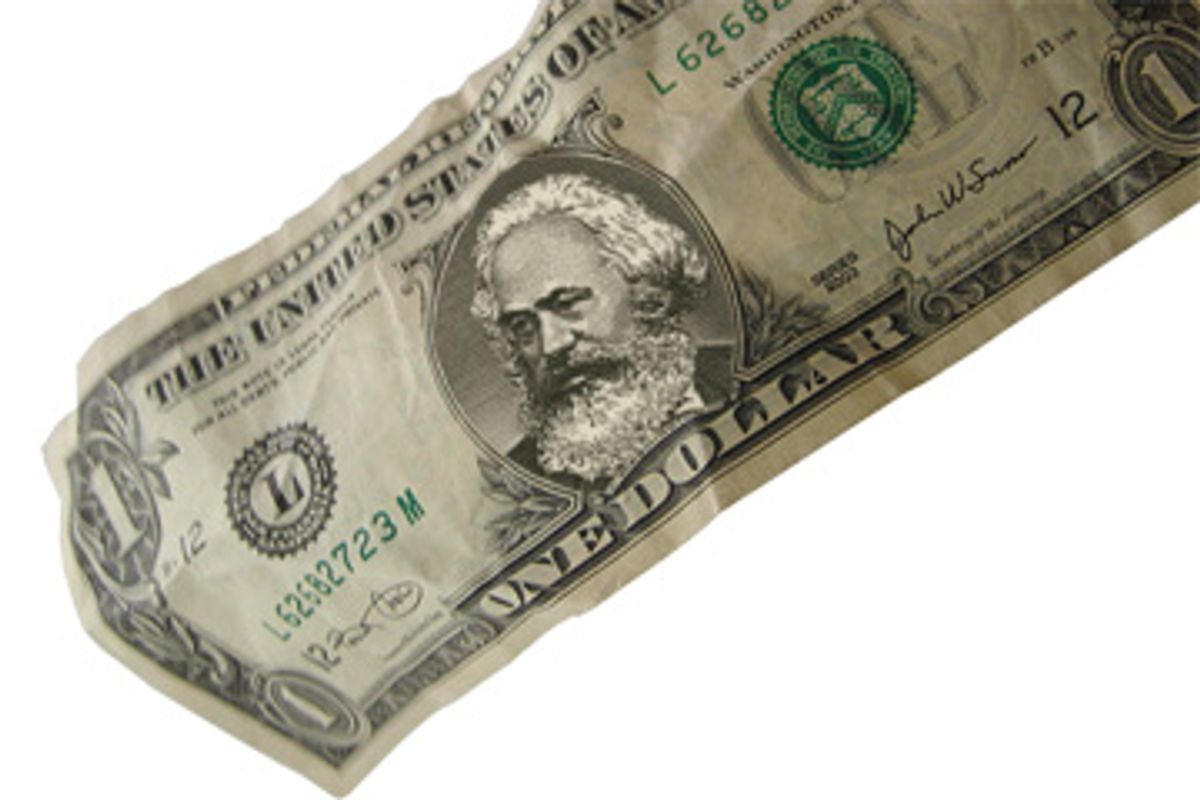 I'm Bob the Banker, and I'm mad as hell and I'm not going to take it anymore. If Barack Obama wins, he's going to take my hard-earned money and hand it over to a bunch of deadbeats and losers. He's going to turn the greatest country on earth into a socialist hell. Nothing less than our free-enterprise system is threatened. I'm angry! I'm really, really angry! And when you hear exactly how deeply Obama's far-left tax scheme is going to reach into my pocket, you'll be even angrier.

First of all, I'd like to give a big shout-out to my little brother Sam — or "Joe," as he seems to be calling himself now. If it weren't for Joe, America might never have realized that it was on the verge of installing Karl Marx II in the White House. As you probably know, Joe told Obama he was "getting ready to buy a company that makes $250,000 to $280,000 a year." Then he asked, "Your new tax plan is going to tax me more, isn't it?" That's when V.I., I mean Barack, Obama said, "When you spread the wealth around, it's good for everybody."

Hello, Mr. Engels! These true-believing pinkos can only hide their true colors for so long. Sooner or later, they're gonna slip up and reveal their plan to declare class war. It's in their (Red) blood. Thank goodness that John McCain picked up on Obama's fatal mistake and is making it the centerpiece of his campaign. The best and brightest Republican pundits agree: Obama's colossal boo-boo could turn this whole race around.

I know, I know. The "elite" liberal media have been beating up on Joe, saying he isn't a plumber, isn't named Joe and isn't really going to buy any business. But you know what? Real Americans, not snooty liberals who swank around at Georgetown cocktail parties, don't care. They know that the point is that Joe wants to buy that plumbing business, and no Harvard-educated pinko should raise his taxes if he does. The American dream is aspirational!

Besides, Joe's story is irrelevant anyway. Because it just so happens that I make exactly the same amount of money as that plumbing business that Joe hopes to buy someday. Obama's tax plan  will hit me right in the wallet.

I kept telling the McCain people this. I explained to them that I really am a small businessman who is angry that his taxes will go up under Obama. I told them they should make me their poster child, not Joe. I told them I wasn't on some kind of ego trip, I just wanted to help save America from socialism. But for some reason they didn't seem interested. They kept saying something about how they really needed someone who was named "Joe the Plumber." Go figure.

Anyway, let's get back to my story. I'm a typical middle-class American. I run a small family bank in Ohio. I'm no Master of the Universe, no hedge-fund manipulator. I have a couple of dozen employees. I work hard. I obey the laws. I have a family. But if Barack Trotsky Obama wins, I can kiss it all goodbye. I've done well for myself, but $280,000 a year doesn't go as far as it used to, even here in Akron.

The numbers don't lie. So here they are.*

So, as I said, I make $280,000 annually after business expenses. I'm married and filing jointly. Under Obama, my itemized deductions would actually increase slightly — I'd get $49,420 in itemized deductions, while under McCain I'd get $48,975. But my personal exemptions would increase slightly under McCain — he'd give me $6,911, whereas I'd only get $6,132 from Obama.

That leaves my taxable income at $213, 766 under Obama, $213,433 under McCain. Now we have to factor in the bracket cutoff, which for 2009 is $208,850. Anything below that figure for married couples filing jointly is taxed at the fourth tier, 28 percent. Any income above it, until you get up to near $400,000, is taxed at the fifth tier. And this is where the raving income-redistribution scheme of Barack Robespierre Obama kicks in.

As you can see, my taxable income is about $5,000 higher than the cutoff. McCain is going to tax that $5,000 at the current rate, which is 33 percent. But Obama's crazed plan calls for raising that rate to — get ready for it — 35 percent.

That's a difference of $257. I'll say it again: Two hundred and fifty-seven dollars.

That's not two hundred and fifty-seven dollars I, or America, can afford.

Things are tough right now. Average working Americans like me are really struggling. They're angry. And when they see the effects of Obama's spread-the-wealth lunacy on an average angry struggling American like me, they'll be even more angry, average, and struggling.

Take my Jaguar. Do you have any idea how much it costs just to have that thing tuned up? It's like a BMW repair bill on steroids. We're talking $500 just to open the hood.

The hard times are taking a toll on my family life, too. My wife has had to completely cut out having her colors done, and her personal shopper is threatening to walk if we keep cutting back on her hours. We're tightening our belts, but you can only tighten so far before there's no more room to pull.

Then there's food prices. All across America, families are angry and struggling as they try just to get by. We're in the same boat. It's getting harder and harder just to put food on the table. We're only eating filet mignon twice a week, and under Obama's crazed far-left regime, we may have to completely give up Maine lobster and Macanudo cigars.

But this wild socialism will not stand. This isn't like the un-American, Commie-loving World War II years, when the top marginal tax rate was between 88 and 94 percent, and the hardworking executives who drive our economy made seven times less than they do now. These days, thank God, no one buys that pinko stuff about "sacrifice to fight a common enemy."

These are tough times. The economy is collapsing, the stock market is devastated, home foreclosures are soaring, unemployment is up, healthcare is unaffordable and the entire world banking system is in danger of failing. And at this moment of crisis, Americans know that one thing and one thing only can save our great country: an obsessively ideological anti-tax crusade that will allow me to mow the grounds of my estate five times, not four times, a month. After all, what's good for my lawn is good for America.

Just stay off of it.

*Author's note: All figures about the comparative tax bills under Obama and McCain come from an interview with Gerald Prante, an economist at the nonpartisan Tax Foundation.