Bipartisanship and threats of war toward Iran

A new Washington Post Op-Ed from a typical Beltway "bipartisan" group demands that the new president prepare for an attack on Iran.

Two former Senators -- conservative Democrat Chuck Robb and conservative Republican Dan Coats (that's what "bipartisan" means) -- have a jointly authored Op-Ed in The Washington Post today decreeing what the U.S. must do towards Iran.  The essence:  Iran must be prevented, using any means necessary, from not only obtaining nuclear weapons, but also denied even "the ability to quickly assemble a nuclear weapon," which means "the complete cessation of enrichment activities inside Iran," even for civilian purposes.

To achieve that, the Patriot Act should be used to block all Iranian banks from any involvement in the U.S. economy and "our European allies [must] sever commercial relations with Tehran."  And this is what we should immediately prepare for:

The U.S. military is capable of launching a devastating strike on Iran's nuclear and military infrastructure -- probably with more decisive results than the Iranian leadership realizes.

An initial air campaign would probably last up to several weeks and would require vigilance for years to come. Military action would incur significant risks, including the possibility of U.S. and allied losses, wide-scale terrorist reprisals against Israel and other nations, and heightened unrest in the region.

Both to increase our leverage over Iran and to prepare for a military strike, if one were required, the next president will need to begin building up military assets in the region from day one.

They conclude with this grave warning:  "Time may be shorter than many imagine, and failure could carry a catastrophic cost to the national interest."

So here we have, yet again, our glorious Foreign Policy Community threatening another country -- one which hasn't attacked us and can't attack us -- with war, threatening to bomb them with "devastating strikes" that "would probably last up to several weeks and would require vigilance for years to come."  And they want the next President, beginning this January, to "build up military assets in the region" in order to threaten and prepare for those attacks.

It's just objectively true that there is no country in the world -- anywhere -- that threatens to attack and bomb other countries as routinely and blithely as the U.S. does.  What rational leader wouldn't want to obtain nuclear weapons in a world where the "superpower" is run by people like Dan Coats and Chuck Robb who threaten to attack and bomb whatever countries they want?  Even the Coats/Robb Op-Ed argues that Iranian proliferation would be so threatening to the U.S. because "the ability to quickly assemble a nuclear weapon would effectively give Iran a nuclear deterrent" -- in other words, they'd have the ability to deter a U.S. attack on their country, and we can't have that.

And then there is the supreme irony that Coats, Robb and their war-threatening comrades justify an attack on Iran by referencing U.N. Resolutions which Iran is putatively violating, even though Article 2 of the U.N. Charter explicitly provides that "All Members shall refrain in their international relations from the threat or use of force against the territorial integrity or political independence of any state." Yet Supremely Serious Bipartisan Leaders like Coats and Robb who shape U.S. foreign policy -- along with the rest of our political establishment -- routinely violate that provision more than any other country in the world, by constantly threatening to invade and bomb a whole roster of other nations.

Not only does this war advocacy reflect the reckless militarism of our Foreign Policy Community, it also illustrates how deceptive is the Beltway concept of "bipartisanship."  In their Op-Ed, Coats and Robb are summarizing the "findings" of a new report (.pdf)  from what they call a "high-level task force, a politically diverse task force," and which The Post calls "the Bipartisan Policy Center's national security task force on Iran."  That task force was convened by the "Bipartisan Policy Center" -- an organization founded in 2007 by former Senator Majority Leaders George Mitchell, Howard Baker, Tom Daschele and Bob Dole. 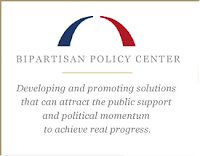 The Center is basically a trite Broderian dream.  You see, as they piously trumpet, these Serious Leaders rise above the "partisanship [that] poisons our national dialogue" and instead engage in "respectful discourse across party lines"  in order to "develop policy solutions that make sense for the nation and can be embraced by both parties" -- such as bombing Iran for weeks (at least) and, if necessary, unilaterally starting a war that requires "years of vigilance."  Their Serious, pretty logo of a converging blue and red arc demonstrates how civil and harmonious they are.  Let's look at what this elevated "bipartisanship" really means in the case of the Iran report:

The Serious bipartisan task force that produced this war-threatening report employed two "consultants" which it described as "two leading Iran experts: Dr. Michael Rubin, and Mr. Ken Katzman."  "Dr. Michael Rubin" is the supremely crazed neocon of National Review and the American Enterprise Institute, a former Giuliani advisor who has a single-minded obsession with urging American war on Iran. Katzman is a less ideological D.C. bureaucrat who covers Iran for the nonpartisan Congressional Research Service -- a competent expert by all appearances but hardly a counterweight to the extremist Rubin.

So those are the two "experts" on whom they relied:  a raving neocon and a neutral technocrat.  And the conservative co-Chairmen -- Coats and Robb -- were joined on the 11-member panel by such disinterested beacons of bipartisan objectivity as:

The rest of the panel was composed of several retired military officials, such as McCain supporter Ret. Admiral Gregory “Grog” Johnson, and former Clinton administration Pentagon official Ashton Carter.  In other words, it was the very embodiment of Glorious Beltway "bipartisan" foreign policy tribunals -- numerous hard-core, right-wing ideologues sprinkled with a couple of like-minded right-wing Democrats and a neutral establishment technocrat or two, all endorsing a pre-ordained, flagrantly extremist, war-loving policy which is then deemed "the harmonious mainstream Center" which no Serious Person opposes.

Much is made of the vague and distorted "threats" issued by a rogue Iranian official, Mahmoud Ahmadinejad.  But here you have -- yet again -- the predominant, bipartisan faction inside the U.S. composed of leading political and military figures, announcing, in one of the country's most mainstream and influential media outlets, very specific plans to threaten, attack and bomb Iran, and to do so quickly and decisively, regardless of whether there is U.N. approval and regardless of whether Iran intends to attack the U.S.

Meanwhile, both presidential candidates, at least rhetorically, affirm the central premise (one must "do everything" to prevent Iran from obtaining nuclear weapons, including the use of force), and leading right-wing journals publish plans for bombing and invading Iran and seizing its oil assets until they agree to change its governnment to one that we approve.  There is a prevailing perception that the bipartisan Foreign Policy Community has learned its lesson from the Iraq debacle, but threats of war and endless war itself are their primary, indiscriminately used weapon and that has not changed.

UPDATE:  From the first section of the Report:

So the diverse, bipartisan Report was written primarily by one of most extremist and most discredited neocons on the planet (last seen deceitfully attacking the robust interventionist Joe Biden as "Tehran's favorite Senator" on The Washington Post Op-Ed page) -- a long-time agitator for a war on Iran in the pages of National Review and the halls of the American Enterprise Institute.  That is what's being passed off today by The Washington Post's Op-Ed page as a new consensus trans-partisan approach to Iran (h/t sysprog).

UPDATE II:  Kenneth Katzman of the Congressional Research Service, one of the two named expert-consultants on the task force, emailed me regarding some of the points I made here, and after we exchanged several emails, I invited him to discuss the Report with me on Salon Radio, which we will do tomorrow.

On a related note, Jonathan Schwarz documents that a central plank of U.S. foreign policy in this decade is the proclamation that we will wage preemptive war on countries if we think doing so is necessary to prevent them from developing a deterrent against our attacking them at will -- a truly perverse doctrine that is also explicitly advocated in the Coats/Robb Op-Ed.