Eat, for this is my body

In the amazing new film "Stranded," survivors of the legendary 1972 Andes plane crash talk about the moral and spiritual implications of eating their friends. 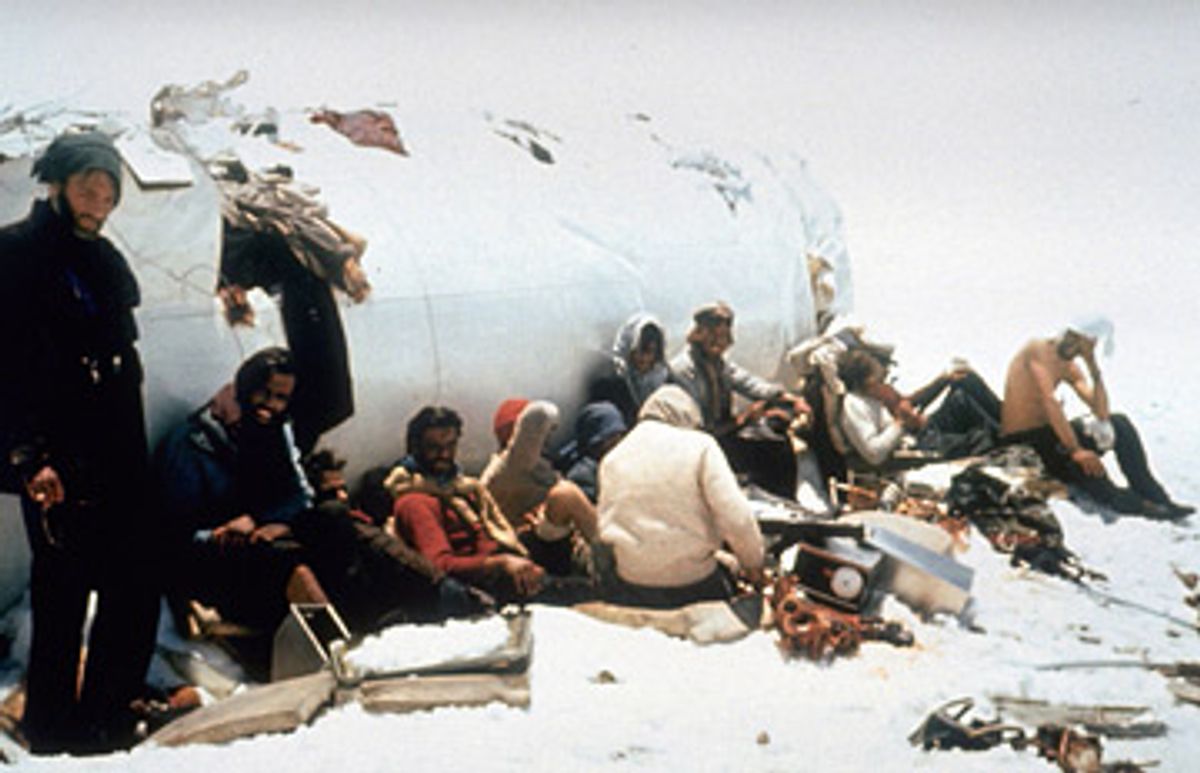 An actual photo taken by survivors of the 1972 plane crash in the Andes, as seen in "Stranded."

In December 1972, at the beginning of the South American summer, two Chilean shepherds came upon an unlikely-looking pair of wanderers in the Andean foothills. The two young men were sunburned, skeletal and clad in ragged, miscellaneous items of clothing; they looked more like hermits or vagrants than mountaineers. When the two pairs of men finally found a way to communicate across the river gorge that separated them, the strangers' story seemed unbelievable. They were members of a Uruguayan rugby team, they explained, part of a group of 16 young men who had survived a plane crash high in the mountains and spent 72 days living on top of a glacier in the airplane's wrecked fuselage.

I'm just barely old enough to remember the worldwide media firestorm that followed the discovery of Nando Parrado and Roberto Canessa -- who had walked 44 miles in eight days over snowbound, 13,000-foot peaks, without anything close to proper equipment or training -- and the rescue of their fellow survivors. (In fact, Parrado and Canessa could have walked a much shorter distance to an Argentine town on the eastern slope of the Andes; they had no way of knowing that.) But even for those born long after the event, that 1972 plane crash and its aftermath have assumed nearly mythological status. For one thing, Parrado, Canessa and their friends had almost literally come back from the dead. The governments of Chile, Uruguay and Argentina had long since given up looking for them; it was assumed they had all been killed and that their remains might not be recovered from the mountains for years. For another thing, they had survived by eating human flesh.

As Gonzalo Arijón's intimate, terrifying and positively riveting documentary "Stranded: I've Come From a Plane That Crashed on the Mountains" makes clear, the first South American TV reports broadcast after the rescue bordered on the hilariously obtuse. How had 16 of the original 45 passengers survived so long, with no food or supplies beyond whatever was on board a twin-turboprop Uruguayan Air Force plane? Surely, as one doctor purportedly put it, there was no natural explanation to be found for their relatively good condition, and one had to consider divine intervention.

Perhaps so. As any current or former Catholic will recognize, there was a powerful religious dimension to these young men's survival. Most if not all were devout believers, and as several of the survivors tell Arijón's camera, 30-plus years later they still experience their ordeal as a profound spiritual transformation, almost a sanctification. Shortly after their rescue the men decided they had to be truthful about what had happened on the glacier. As one of them told a packed and breathless press conference in Montevideo, Uruguay, a few days later, "The day came when we had nothing left to eat, and we said that Christ, by offering his flesh and blood during the Last Supper, had shown us the way by indicating that we had to do likewise: Take his flesh and blood, incarnated in our friends who had died in the crash."

Even though several of the men interviewed in "Stranded" have previously discussed their infamous ordeal in considerable detail -- most cooperated with journalist Piers Paul Read in the writing of his 1974 bestseller "Alive," and Parrado's memoir "Miracle in the Andes" was published in 2006 -- Arijón's film seeks a kind of coherence and epistemological clarity that other accounts lack. (The most gruesome specifics are handled briskly and directly, but if you want to know how human flesh tastes, go elsewhere.) An acclaimed Uruguayan documentarian who now lives in Paris, Arijón knew some of the survivors in boyhood and was raised in the same leafy Montevideo suburb as most of them. The mutual trust is obvious. He includes artful cinematic reconstructions of certain events, which are sometimes gripping and sometimes distracting, but the heart of the film is his wrenchingly honest, impressively thoughtful interviews with the survivors.

One way of explaining "Stranded" is that Arijón's after not just the objective facts of what happened and when, which are dramatic enough, but also the subjective reality, the psychological and physiological desolation of the experience. As one interviewee observes, what happened to them seemed almost like some cruel deity's version of a Darwinian laboratory experiment. These were privileged, well-educated young athletes from the upper crust of South American society, in excellent health and admirable physical condition. (There were a handful of women among the 45 original passengers, but only one survived the crash for any length of time. She died in an avalanche on day 16, along with seven others.) How long could they last, in the most extreme conditions imaginable, before reverting to savagery? In fact, although the survivors saw many of their friends die, violated a primordial human taboo and experienced the terror and despair of being totally cut off from the outside world -- they actually heard on their transistor radio that authorities had abandoned the search -- what's so striking about this story is that none of the men on that mountain descended to inhumanity or brutality.

Contrary to some tabloid speculation at the time, there is no evidence or testimony to suggest that anyone was killed for food. (There was no shortage of bodies; 16 people died in the crash, and 13 more perished of injuries, exposure or malnutrition in the following weeks.) They evidently debated the decision seriously for some time, and 36 years later the survivors remain painfully alert to the moral, ethical and theological dimensions of their dilemma. One man in the film discusses the guilt he still feels about not being able to ask their dead friends' permission, and says they tried to make up for it at the time by promising each other: "If I die, use my body." Once the group's decision had been made, two men were delegated to cut the frozen bodies into edible portions and prepare them -- by thawing small pieces on the plane's fuselage in direct sunlight. Those two never told their fellow passengers exactly which of their friends they had eaten. (Some corpses, probably including the women's, were still intact at the time of rescue.)

Of course these men were not strangers to each other; they were literally teammates, bound by class, race, geography, religion and nationality. One can speculate that a random assortment of people on, say, a commercial airliner might have degenerated into "Lord of the Flies" predation or madness. But in its peculiarly and profoundly moving fashion, "Stranded" is the most optimistic film about human nature I have seen in years. Arijón captures the group's visit to the crash site in the summer of 2006, with various wives, adult children and relatives of those who died alongside them. It's clear that these articulate, handsome men, now in their 50s and 60s, feel ennobled, and not ashamed, by having endured one of the worst situations imaginable. They ate their friends' bodies in order to live, and today the extended families of those 16 survivors number more than 100 people. Rather than fleeing from the moral responsibility and spiritual resonance that accompany that history, these men and their loved ones have embraced them.

"Stranded: I've Come From a Plane That Crashed on the Mountains" is now playing at Film Forum in New York. It opens Nov. 7 in Los Angeles and San Francisco; Nov. 14 in Boston, Palm Springs, Calif., San Diego and Washington; Nov. 21 in Minneapolis; Nov. 28 in Philadelphia; Dec. 3 in Columbia, Mo.; Dec. 5 in Atlanta, Lake Worth, Fla., St. Louis and Seattle; and Dec. 12 in Chicago, Denver and Omaha, Neb., with more cities to follow.