Charlie Kaufman's ambitious directing debut scratches at something deep and painful but ends up patting itself on the back. 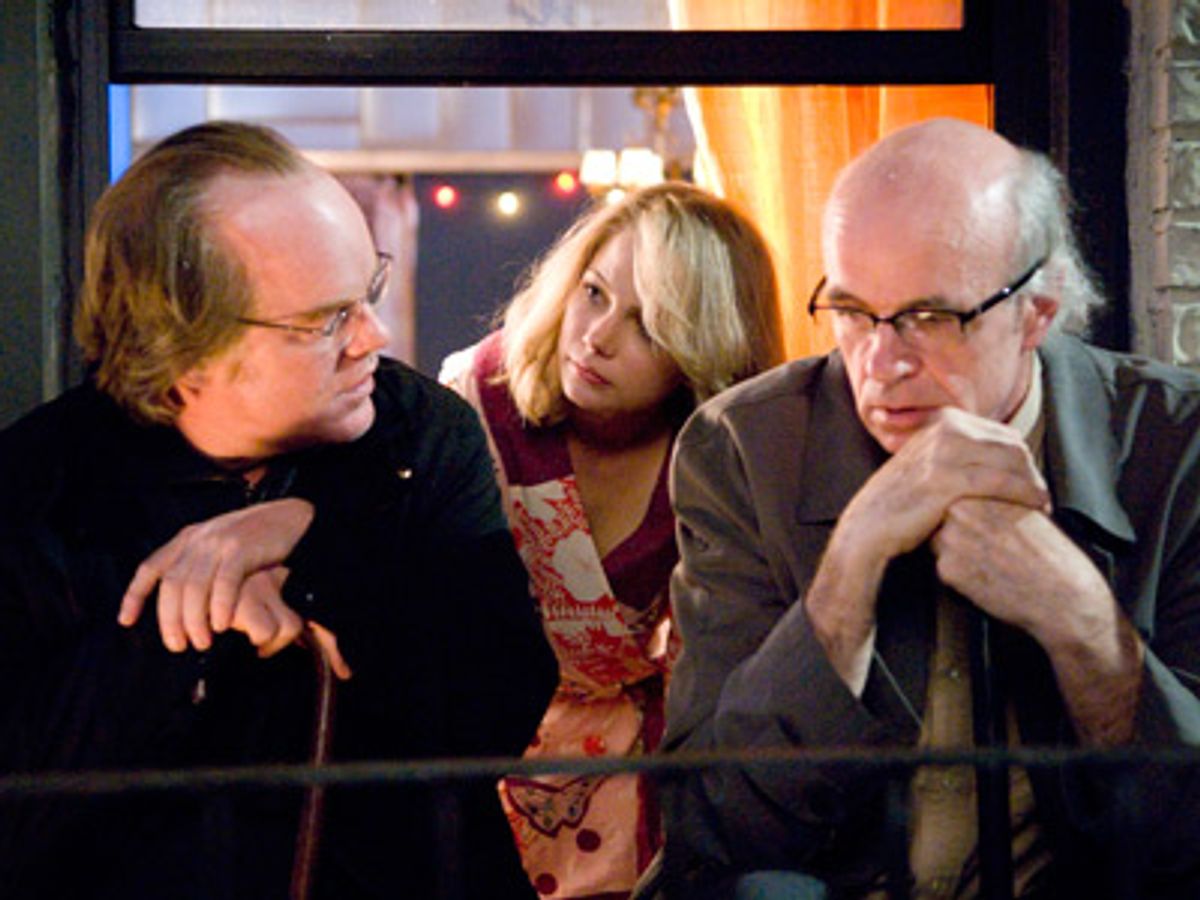 In the first half of Charlie Kaufman's "Synecdoche, New York," a writer works through his greatest fears; in the second half, a writer writes about his greatest fears, and it's not the same thing. Kaufman's lead character in "Synecdoche" isn't a writer -- he's a theater director -- but it's clear he's a stand-in for Kaufman, the writer behind "Adaptation," "Eternal Sunshine of the Spotless Mind" and "Being John Malkovich." Or maybe that should be the writer inside them: Kaufman's stories are so heavy on self-aware, intricate mechanics that you could almost imagine him sending each one out into the world with a miniaturized version of himself inside, a little guy in a boiler suit frantically pushing buttons, pulling levers and pumping bellows, doing his damnedest to keep the gizmo humming. At his best -- as in the sometimes moving, more often maddening "Eternal Sunshine," directed by Michel Gondry -- Kaufman is like a mechanic with a gentle touch, capable of exposing the soul of the engine. At his worst -- as in the self-conscious, gratuitous "Adaptation," made by Spike Jonze -- he's more of a highly skilled grease monkey, a guy who methodically fits all the parts together and hands you the bill with a smirk, a look that says, "I can do this and you can't." (Read Andrew O'Hehir's interview with Kaufman here.)

"Synecdoche, New York" is Kaufman's directorial debut, and even though he is, for the first time, the big-picture architect, he still can't get away from being the little man inside working the gears. In this case, though, the Kaufman inside adds the human touch, at least for the movie's first half. But like "Eternal Sunshine" before it, "Synecdoche" is two movies in conflict with each other, one half scratching at something deep and painful, the other patting itself on the back for being so technically elaborate and emotionally ambitious. The movie's title itself has a double meaning: It's a sound-alike word for the upstate New York city in which the lead character lives, and also a figure of speech in which a very specific word is used as a substitute for a more general one, or vice versa. Discuss. Or maybe that should be: Lather, rinse, repeat.

I wouldn't be so hard on "Synecdoche" if I hadn't been so drawn in by its early moments and so drained by the rest of it. Philip Seymour Hoffman plays Caden Cotard, a theater director working for a regional company in Schenectady -- as the movie opens, he's putting the finishing touches on that old chestnut "Death of a Salesman," in which he has purposely cast young actors, directing them to play the beaten-down souls that, even in the midst of their youthful freshness, they know they'll eventually become. Caden's wife, Adele (Catherine Keener), is an artist who paints miniatures -- they're exquisite and raw at the same time, angry little things that require a great deal of painstaking discipline to create. Caden and Adele live with their young daughter, Olive (Sadie Goldstein), in a drab, messy, run-down house.

That house, a place no one has the time, money or energy to spruce up, is a piercingly realistic visual metaphor for the things most people give up when they've followed their dream of working in the arts. In the movies, painters, directors, writers and their ilk usually live in groovy Tribeca lofts or in spare, sprawling split-level houses. The house Caden and his family live in, packed with literal and metaphysical clutter, is the perfect setting in which to go mad. And at the beginning of "Synecdoche, New York," Caden seems headed for madness. A freak shaving accident sends him to the emergency ward, and once the doctors start looking at him, they start finding a million things wrong with him: His pupils don't dilate properly; his face becomes dotted with pustules.

Are these ailments real or imagined? Kaufman takes care never to spell out the difference: Everything in "Synecdoche" is unreal and hyperreal at the same time. Adele, buckling under the pressure of the couple's strained marriage, takes Olive to Berlin (she's mounting a show there), a trip that's supposed to last a month. Before long, Caden hears that Olive, now 10, has become an art project herself, a girl covered in tattoos -- he has missed most of her childhood without even knowing it.

In between, before and after, Caden flirts heavily with Hazel (Samantha Morton, in an appealing, unforced performance), the curvy cutie who runs his theater's box office -- she lives in a house that's perpetually on fire, or at least just smoldering, a surreal, Kaufmanesque touch. At some point Caden becomes involved with one of his actresses, a fluttery, fragile bird named Claire (Michelle Williams, whose delicacy is dwarfed by the gargantuan proportions of the movie around her). He receives a MacArthur grant in what surely must be a dream sequence, except it's not. His life takes turns as if it had a mind of its own; he's not the one driving it -- instead, it's driving him, often into corners he can't get out of.

And all of that happens before "Synecdoche, New York" gets really confusing. Caden suffers the kinds of neuroses and anxieties common to a lot of creative people, and in the first half of "Synecdoche," Kaufman presents them as a half-comedic nightmare. Is there really blood in Caden's urine, or is he just imagining it? Who knows? But what Kaufman does get at effectively is the fear that bits of life might slip away from you, or be taken from you, when you're not paying attention, and in that first half Hoffman is right in tune with Kaufman's only half-joking cry of anguish: He puts an affable face on the edge of terror.

But in the second half, it all goes to hell. We all read or hear about people who leave the corporate world to become artists -- they always say things like, "I felt a need to create!" Caden is something else again: He's been living for the arts so long he doesn't even know what real living is anymore. Kaufman renders that idea in bold, fat strokes, reinventing the already bulging universe of the movie midway through and turning it into an uninteresting mess. "Synecdoche, New York" becomes a highbrow version of "The Truman Show," in which actors drift in to substitute for -- and eventually take over the lives of -- the characters we got to know in the first half. Emily Watson's Tammy auditions for, and gets, the part of Hazel; Tom Noonan shows up and virtually declares that he is Caden -- he's a one-man cartoon of Method acting, the embodiment of the wrongheaded idea that the Method demands that an actor "become" the character.

That could be a great, bleak comic idea, if it weren't just a cog in Kaufman's bigger "What is the purpose of art? What is the meaning of life?" thesis paper. Bulldozed by the actors who've stepped in to re-create their lives, Caden and Hazel wonder if they're actually real anymore. At one point a character utters the pivotal line "There are a million little strings attached to every choice we make," and we're invited to look back at the mess of Caden's life as if it were -- get this -- a perpetually evolving play. Because you know what? All the world's a stage.

I wish I could say I made that line up, but the actor who's playing me right now stole it from Shakespeare and typed it in when I wasn't looking. "Synecdoche, New York" strives to be a work of greatness. But Kaufman's overarching vision is a lot less interesting than the small insights he gathers along the way. This is what happens when life imitates art, and blows it.