Obama's big lead in the polls is real

Democrats are afraid to believe he's really winning. But a pollster explains why those polls that show a tight race should be treated with skepticism. 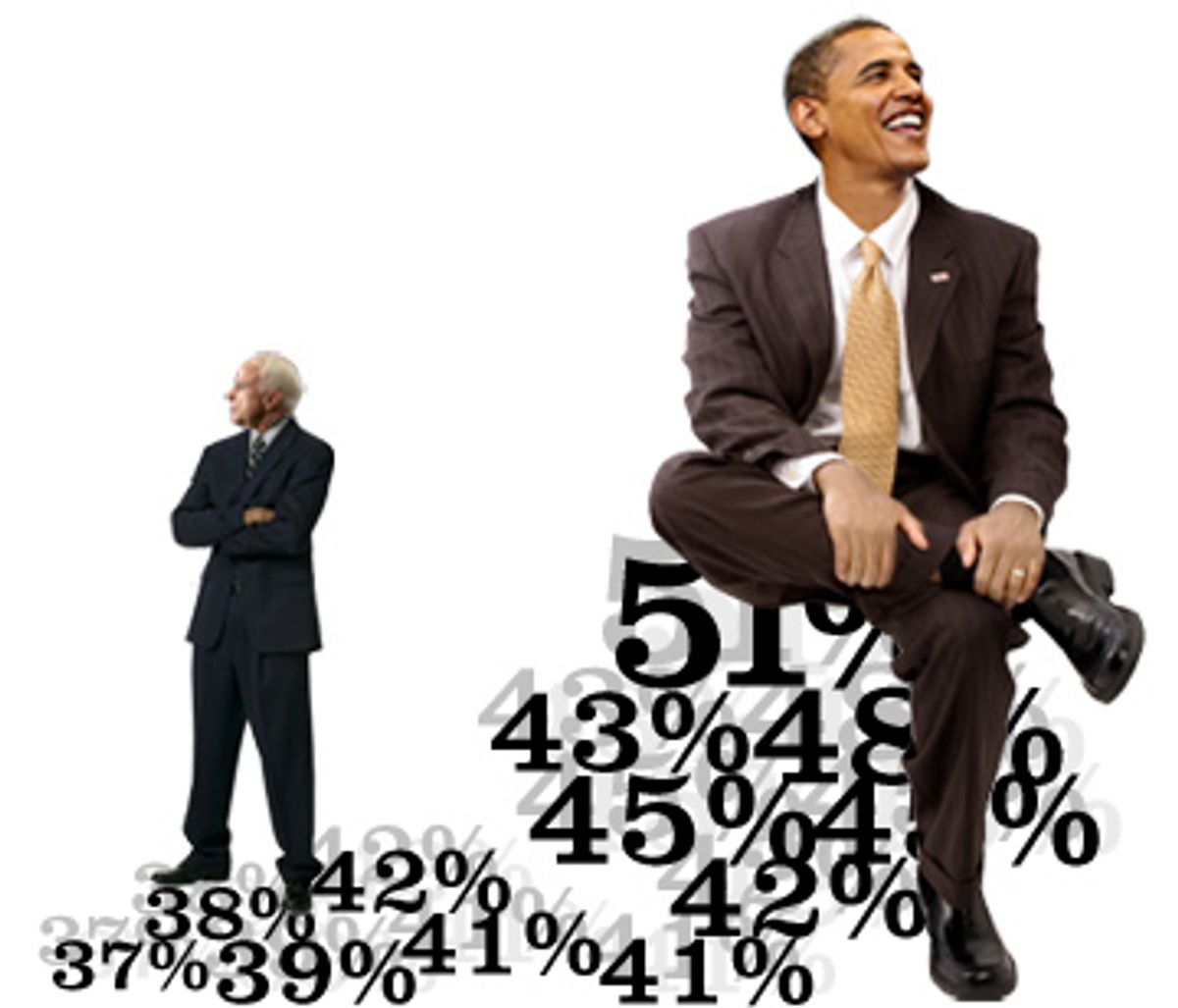 At the time of this writing, just past midnight in the opening minutes of  Oct. 24 -- meaning a mere 11 days before the first votes in the 2008 presidential election will be cast in Dixville Notch, N.H. -- I am looking at the results of no fewer than 11 national polls. Barack Obama leads in every one.

Obama leads by a double-digit margin in five of the 11. With over 50 percent support in seven of the 11. At the same time state polls show his lead outside the margin of error in supposedly critical battleground states like Virginia, Colorado and New Mexico, and he has growing double-digit leads in such formerly competitive states as Wisconsin, Pennsylvania and Michigan.

But because one of the 11 polls, the one performed by a survey company that touts itself as "America's most accurate pollster," shows only a 1-point Obama edge and another, from venerable Gallup, shows a slim 4-point margin among so-called likely voters, many Democrats are still nervous. Afraid that the polls with the wide margins are misleading; scared that the "Bradley Effect" will cause many more white votes for McCain and against Obama than the polls are registering. Worried that despite Obama's financial advantage, enthusiasm gap and vaunted field organization, the breakthrough young and minority vote will not materialize as promised.

Well, this Democratic pollster has three simple things to say:

1) The current Obama margin is real, has been present and generally growing for more than a month, and is predicated on three very firm foundations unlikely to change in the final 10 days of this campaign. First, a general negative mood about the country and the current administration. Second, the specific profound impact of the financial collapse and deepening recession, which has dominated this election since the collapse of Lehman Brothers in mid-September. And third the difference in candidate performance and persona, particularly in the three televised debates, that has led to the Democrat growing in stature and steadiness while his more experienced opponent has seemed increasingly risky and uncertain. While the margin could still fluctuate -- and perhaps there will be a snap-back from an "anti-coronation" effect -- i.e, undecided voters who realize Obama is about to be elected but don't want to add to his or the Democrats' margin of victory -- the dynamic of the overall situation is clear.

2) The likely voter model offered by Gallup is flawed. The Gallup organization itself seems to recognize this, since it is also reporting an "expanded" turnout model that has shown Obama running anywhere from 2 to 4 net points better than its "traditional" model. The flaw is simple: Gallup identifies "likely" voters by asking their previous voting history, meaning that if you are a first-time voter or you skipped voting in either 2000 or 2004, your preference is either not counted at all or weighted down. Needless to say this discounts the substantial numbers of new voters who have already participated in the 2008 primaries, have just registered to vote as part of record registration drives across America, or are planning to cast a vote on Nov. 4, spurred by a massive Democratic field organization. Many other pollsters are eschewing this rear-view mirror approach in favor of questions that ascertain respondents' current intentions to vote and their overall interest in the election. Obama performs better in their models.

3) There will always be outliers. The IBD-TIPP poll, the one that shows a 1-point margin, is published by Investor's Business Daily and is the product of a firm called the Technometrica Institute of Polling and Politics. The company's tag line, "America's most accurate pollster," derives in part from its claim to have had the most accurate record of all pollsters in 2004. But one indication of potential bias is the fact that among TIPP's current "hot topics" is the question "Are we ready for socialism?" You could argue that the liberal Web site Daily Kos is biased too, and discount its sponsored poll that shows a 10-point Obama lead -- except the Kos poll numbers resemble those in surveys conducted by traditional network powers ABC, NBC, CBS as well as C-SPAN/Reuters. Those all report double-digit Obama margins. Even a Fox News poll shows Obama leading by 9 points. That's got to hurt, though I suspect they (and Rush Limbaugh) are consoling themselves with thoughts of the ratings increases that will undoubtedly accompany their enhanced profile, post-Nov. 4, as the official megaphone of the opposition.

We can pick at many of these polls. They offer differing methodologies, differing interviewing techniques, differing sample sizes and composition. Yet there is actually great comfort in their diversity -- or disparity. A dozen national polls, and four or five times that many in key states, are near-unanimous as to the standing of this campaign. Given that they have arrived at those results by different means, and are not cookie-cutter products that are all missing the same truth, the American people should be confident about the emerging consensus they have reached.

Leave it to the Republicans to doubt the polls, to pin their hopes on the possibility that all these different survey firms have got it wrong. (Where is our modern-day Republican Cassius to opine that "The fault [my friends] is not in our polls/ But in ourselves"?) From my perspective, barring some unforeseen circumstance in the next 11 days, all that remains to be seen is the margin of victory, and whether, as these polls seem to be hinting, we're headed for a landslide.