A tale of two faces 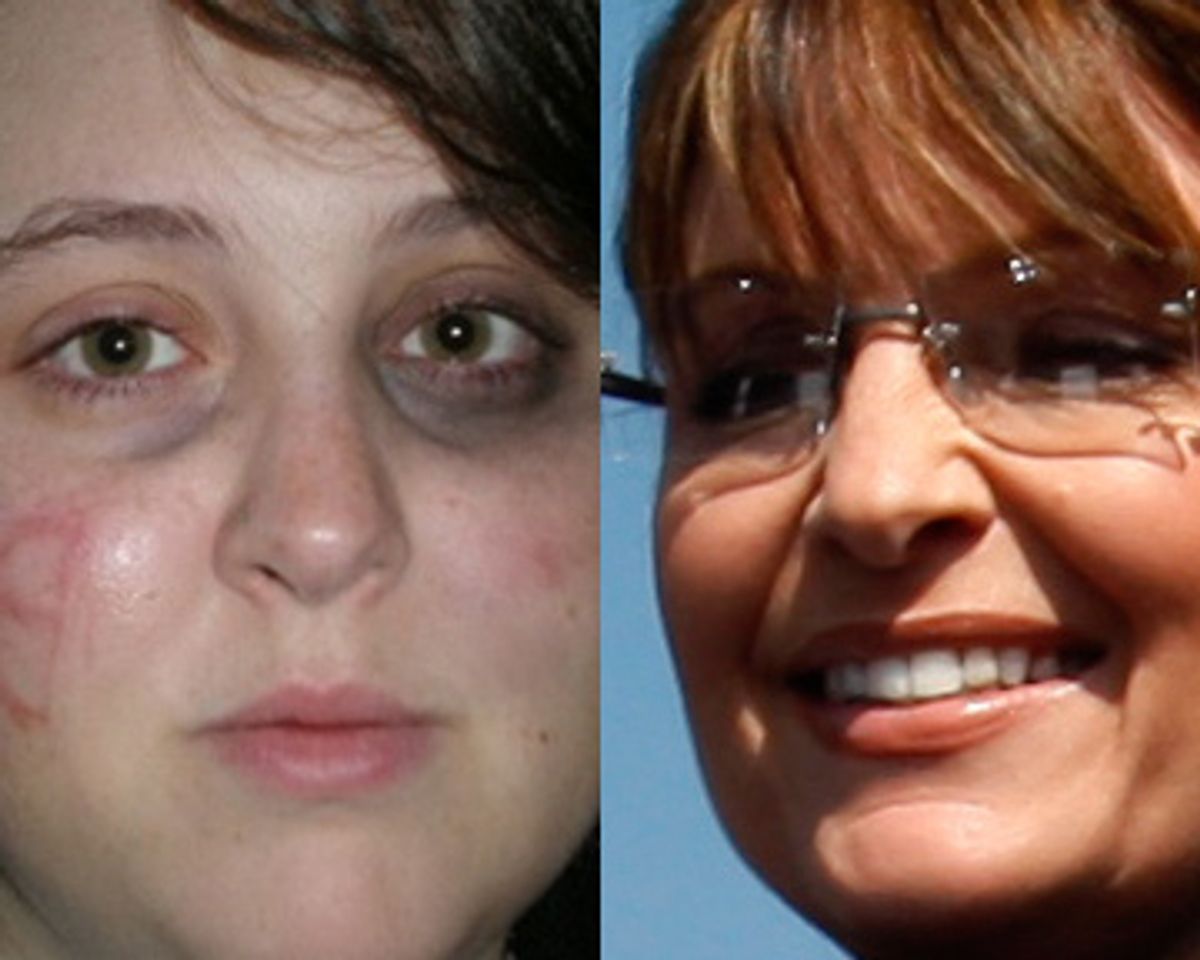 I was attending the fascinating WebbyConnect conference for a few days, and the campaign got deeply weird while I was gone. Catching up on television Friday I found myself transfixed by wall-to-wall coverage of two female faces suddenly at the center of this presidential race --the expensively made-up visage of Sarah Palin and the sad self-mutilated face of Ashley Todd, the disturbed McCain volunteer in Pennsylvania who claimed she was sexually assaulted by an Obama supporter. In a two-day news environment that was supposed to be a big opportunity for John McCain -- Barack Obama was off the trail with his ailing grandmother --McCain instead faced critical coverage of the shocking sums Palin spent for clothes, hair and makeup, as well as his campaign's role in advancing what turned out to be the totally false tale of a white woman abused by a black male Obama backer.

Should either of these stories be big news? Of course both are a distraction from the big issues of the campaign -- the economy, the environment, the wars in Iraq and Afghanistan. But I think the strange controversies over these two women matter because they reveal a corruption at the heart of the McCain campaign. The huge sum spent perfecting the already beautiful Palin for the cameras is the less disturbing of the two stories, but I would disagree with some of my Broadsheet colleagues: I think it's a valid topic for reporting, analysis and criticism. It shows the insanely screwy priorities of the McCain campaign.

Sarah Palin didn't need the best clothing and stylists money could buy; she needed tutoring and coaching on the issues. (She also needed more vetting in August, and what she really needed was to stay as the governor of Alaska, but we won't go there.) Then there's the class hypocrisy -- the so-called Wal-Mart mom shopping at Neiman Marcus, spending more on clothes in a few days than most women spend in their adult lifetimes. The fact that the highest paid staffer on the troubled McCain team this month is Palin's makeup person is also ludicrous; you can't make this stuff up. But it proves that the campaign values Palin primarily for her star power. Robert Draper's incredible article in the New York Times Magazine makes the cynical emphasis on artifice clearer, and more damaging to the campaign.

The Ashley Todd hoax is much more disturbing, of course -- and what's worst about it is the role of the McCain campaign and conservative media in validating it. A local McCain communications staffer gave out details of the alleged attack that hadn't been confirmed by police. Both McCain and Palin called to console this lone staffer, again before the details of the attack could be confirmed, increasing its news value. Matt Drudge , of course, hyped the story hard. Fox News V.P. John Moody said the attack could lead some voters to "revisit their support for Senator Obama, not because they are racists (with due respect to Rep. John Murtha), but because they suddenly feel they do not know enough about the Democratic nominee." (Moody also said that "if the incident turns out to be a hoax, Senator McCain's quest for the presidency is over, forever linked to race-baiting." We'll be watching for a Fox "Breaking News " alert declaring the McCain campaign  officially "over," now that the hoax has been revealed.) Andrew Sullivan rounded up the conservatives who breathlessly advanced the story here.

Why were so many people on the right so ready to believe such a disturbing tale based on so little evidence? Was the story of a violent 6-foot-4-inch black man -- how tall is Obama? --punishing a white female McCain voter too good not to be true? It's hard not to see the troubled Ashley Todd's story, and its reception on the right, as a result of the climate of fear and demonization that McCain and Palin clearly believe is their only hope to win Nov. 4. Todd needs help, but McCain and Palin need to be criticized for helping to advance this story before the facts were in. It's really one of the most despicable things this awful team has done in a pretty lowlife campaign. There's no doubt in my mind that the anti-Obama slurs ("pallin' around with terrorists") that have come from Sarah Palin's lovely and expensively lacquered mouth helped create a climate that leads a disturbed person like Todd to her drama of victimization.

But while these strangely disturbing female faces -- one gussied up with the best makeup money can buy, the other tough to look at, mutilated by self-hate -- visually dominated the news Friday, a parade of male Republicans endorsing Obama this week was the real story. Charles Fried, Scott McClellan, William Weld, Arne Carlson and of course Colin Powell last Sunday -- each laid out a devastating case for why they had to abandon their party, and most of them focused on McCain's irresponsible pick of Palin as a major factor in their decision. Christopher Hitchens likewise came out for Obama, calling McCain "borderline senile" on "Hardball" Friday. The news was weird this week, but still, it's all bad for McCain-Palin.