In the second-season finale of "Mad Men," big bombs drop without making a sound. 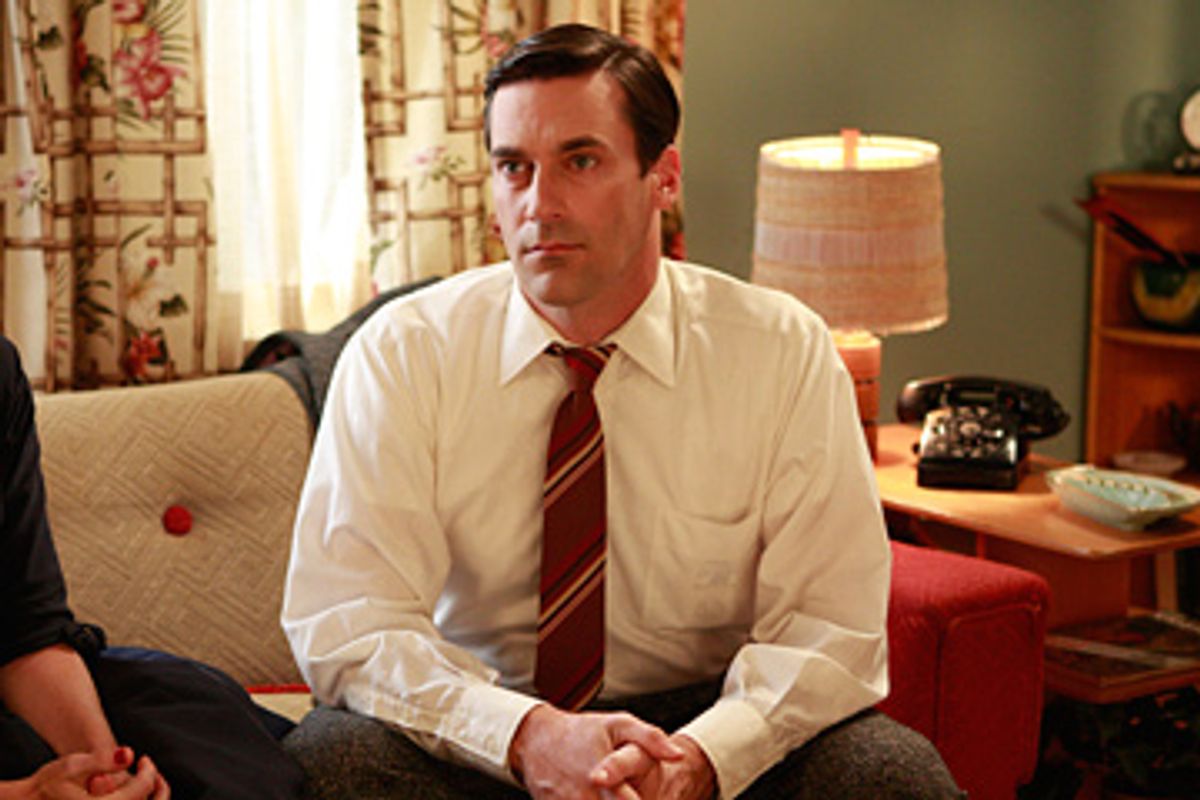 The truth finally came out during the second-season finale of "Mad Men," but it wasn't embraced as enthusiastically as Peggy (Elisabeth Moss) suggested it might be.

But then, most of the characters on Matthew Weiner's stylish, smart drama can't handle the truth -- and clearly would prefer not to know it. This stunning fact was most evident in Don Draper's stricken face as his wife Betty somberly informed him, in the finale's final scene, that she was pregnant with their third child. Betty (January Jones) might as well have told Don (Jon Hamm) that nuclear bombs were falling on Manhattan, the way he flinched and grimaced and held her hand in a gesture of resigned solidarity.

But then, Don Draper always seems to imagine that the world will conform to his needs without unnecessary discussion, even after one of his extended disappearances. After spending three weeks away in California, first with a young nomadic trust funder (who seems to represent total freedom from conventional responsibilities), then with the widow of the man whose identity he stole (who, surprisingly, appears to be the only person Don is truly open with, and who hints at the possibility of real honesty, intimacy and lasting commitment to one woman), Don returns to Betty, but merely tells her, "I had to have some time to think about things."

"It must be nice, needing time and just taking it," Betty responds. "All on your own terms, not wondering what anybody thinks -- me, the children …" How can she not help but feel resentful, when she spent that time struggling to handle the children despite her deteriorating emotional state? Betty might've accepted Don's latest affair, had he at the very least acknowledged his indiscretion. But Don thought he could get away with denying the whole thing. In her own state of denial over her pregnancy, Betty resolved to explore a shadow life of her own in the finale. And who else could pull off a lurid dalliance at a bar with total, dispassionate control? Betty calmly selected a handsome stranger and had sex with him in a back room, all without mussing her hair or deigning to acknowledge the bartender's disapproval at her behavior.

As they fall to pieces before our eyes, all the while keeping up appearances, Don and Betty have more in common than they ever have before. They both chafe at the lives of compromise they've accepted by fulfilling traditional gender roles -- the absent husband and the put-upon wife and mother. But instead of being completely honest with each other and creating the possibility of real intimacy between them, they demean each other for fulfilling these roles. "Honestly, things haven't been that different without you," Betty tells Don, and the look on his face shows that she's succeeded in making him feel like the invisible man he fears the most, an alienated shadow of a husband and father who haunts his own house like a ghost.

"I need to see the kids," Don strikes right back at her, as if he's mostly come back for his children, not for her.

But there was a lot of big news to share in this final episode, most of it delivered with alarmingly little fanfare. Pete (Vincent Kartheiser) informs Duck (Mark Moses) that he lost the Clearasil account, but with the merger pending, Duck doesn't care. Duck tells Pete that he'll be the new head of accounts. In his typical casual way, Roger Sterling (John Slattery) tells Don that they've been purchased by Putnam, Powell and Lowe and Don's going to make half a million off the sale. The guys from PPL casually indicate that Duck will be the CEO of the new company, and Don essentially announces that he's out of the picture if Duck takes the helm. Duck freaks out, pounds the table and makes it clear not only that he secretly masterminded the whole deal but that he's an out-of-control drunk, to boot. The PPL execs, in turn, merely ask him to leave the room, then Roger asks, as if they've already silently agreed that Duck won't be the new firm's president after all, "This won't mess up the merger, will it?"

These stunningly offhanded revelations reflect one of Weiner's most interesting and original dramatic choices this season: to underplay the drama of most of the show's big, dramatic moments. Don simply gets into a stranger's car and is whisked away to Palm Springs instead of flying home. Betty merely accepts a drink from a stranger, and minutes later they're screwing on a couch. Roger offhandedly tells Don to accept the eternal damnation of married life, then he leaves his wife for Don's secretary the next day. While such understated scenes might threaten to alienate any nighttime-soap crowds that gathered thanks to "Mad Men's" recent acclaim, Weiner's subtlety makes artistic and intellectual sense. As in real life (particularly real life in the '60s), these characters are inscrutable and evasive; they pull away from confessions and revelations, hoping that everyone will shut up and go through the motions, even as they each struggle with their own assigned roles: Sal Romano (Bryan Batt) suffers as a closeted gay man in a straight world, Paul Kinsey (Michael Gladis) struggles as an intellectual in a corporate environment, Joan Holloway (Christina Hendricks) plays the reluctant blushing bride, Pete Campbell rebels against becoming the complacent husband and obedient son-in-law.

Even as the Cuban missile crisis plays out in the background and everyone is on edge about its ramifications, they're all struggling to smooth over any unsightly emotions, left to grit their teeth, pour themselves drinks in solitude, and hope for the best.

But there is one truly dramatic revelation before the finale is over: Emboldened by his promotion (which is actually moot, thanks to Duck's ouster) and a few glasses of liquor, Pete takes Peggy's advice about telling the truth. He invites her into his office for a drink, then confesses his love for her. "You're perfect," he tells her, starry-eyed, once again trying clumsily to will some lofty, untouchable fantasy into existence.

Peggy has a moment of undeniable pleasure in spite of herself, but she knows she can never have a relationship with Pete, after giving away his baby -- and she knows he won't love her anymore the second she tells him the truth. So she drops the bomb, and from the anger and sadness and disbelief melting Pete's features, you can almost see his feelings for Peggy evaporate in an instant. Pete isn't exactly one to embrace human beings in all their flaws, or he'd be with his wife at his in-laws' home instead.

So Peggy tries to explain what's happened to her in the wake of her pregnancy, if only to herself. "Well, one day you're there," she starts, carefully, "and then all of a sudden, there's less of you, and you wonder where that part went, if it's living somewhere outside of you. And you keep thinking maybe you'll get it back. And then you realize … it's just gone."

This heartbreaking moment is the natural resolution to Don's advice to Peggy at the start of the second season, in the wake of her giving birth to Pete's child: "This never happened. It will shock you how much it never happened." Now we see the cost of denying the truth, of choosing your own illusion, of discounting real connection to the people around you for the sake of your own egocentric vision of whom you should become.

And other characters are starting to reflect Peggy's choice and its consequences: Joan will give up a part of herself to fulfill her vision of herself as a married woman with a handsome (violent, dismissive) doctor as a husband; Roger will kiss his history with his wife goodbye for a fantastical vision of a sexier life with a young girl; and Cooper Sterling will ensnare itself in unwanted entanglements, losing whatever semblance of soul it had left, so its partners can follow the money and all of the imaginary happiness it promises.

Of course, Betty's revelation to Don about her pregnancy, however subdued, may be the ultimate reckoning moment of the finale. Don has successfully wriggled back into his home by apologizing to Betty in a heartfelt letter, but now neither of them can share in the romantic notion that Don's big gesture made a bit of difference. Whether or not they want a baby is beside the point; Don and Betty are stuck together, and no sweet sentiments can sugarcoat their captivity. Don's stricken look in the wake of Betty's news doesn't reflect his reluctance to have another child so much as his disappointment in realizing that he's being welcomed back not as a flawed, hurt person trying to make a connection, but as a provider. Don and Betty's only chance at a real connection -- total honesty -- is made impossible by their circumstances. Betty demands honesty but doesn't ultimately want it or believe in it, and Don can't possibly come clean without revealing the big lies at the heart of his identity.

There's an exchange between Roger and Don before their merger meeting that hints at the future for this fragile lot. As he leaves Don's office, Roger remarks, "Kennedy's daring them to bomb us." Don's response sums up the mix of suspicions and learned helplessness that forms his survival strategy: "We don't really know what's going on, you know that." Of course, when the blinders come off in the mid- to late '60s, total chaos descends. And so these melancholy ghosts go on giving up big parts of themselves, to keep the coming apocalypse at bay.