Overconfident, smug, convinced of her superiority -- the vice-presidential candidate doesn't belong in the White House; she belongs on basic cable. 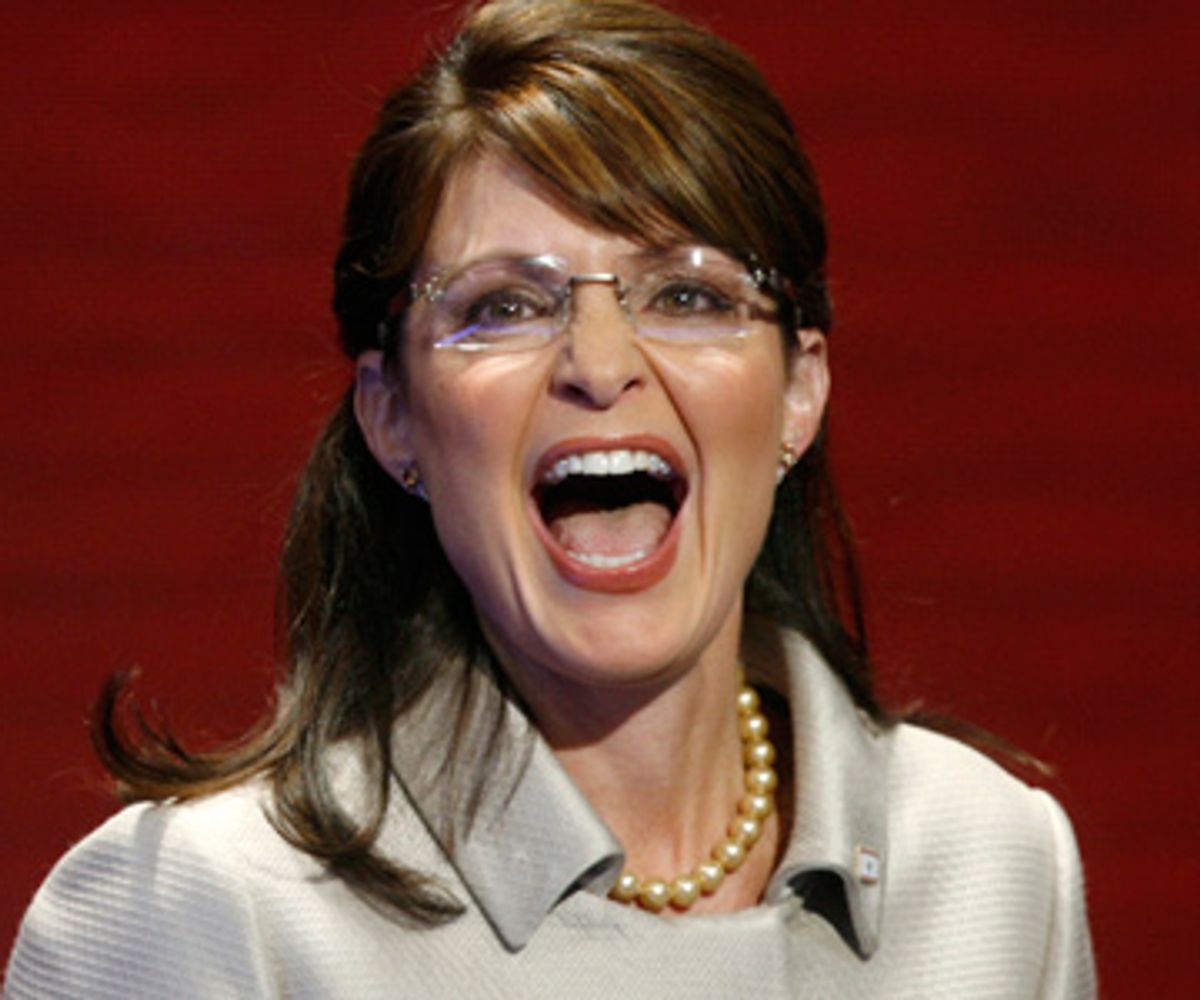 Americans seem to agree that confidence is a good thing, a healthy part of that pop-psych cure-all, self-esteem. "It is confidence in our bodies, minds, and spirits that allows us to keep looking for new adventures, new directions to grow in, and new lessons to learn,” writes Oprah Winfrey on O magazine's Web site. In the Huffington Post, Deepak Chopra recently declared that confidence is the No. 1 factor in maintaining the world’s economic health. But can too much confidence be harmful? Definitely.

The reigning queen of overreaching these days is Sarah Palin. As we all know by now, her inability to name newspapers, her refusal to answer tough questions during the vice-presidential debate and her substitution of smug attitude for a grasp of the facts have never been issues for her core supporters, in light of her charismatic bluster, snippy wit and stunning stage presence. Politicians have distorted the facts and lied for centuries, but Palin may represent a new high (or low, depending on your perspective). Her bravado in the face of contrary evidence -- say, when a Troopergate investigation found that she abused her power as governor and yet she boldly proclaimed herself "cleared of any wrongdoing" --  is something we might expect from rappers, motivational speakers and reality TV stars. As Palin's rise suggests, the key to American success isn't happiness -- it's confidence. "Fake it till you make it" may not be the U.S. motto, but it could be a runner-up.

Take all the hype out of today's American culture and you'll have next to nothing left -- just some experimental poet locked in a broom closet somewhere with no Internet. Rhonda Byrne's bestselling book "The Secret," for instance, has encouraged millions of down-in-the-mouth Americans to "create their own reality" by eliminating all negative thoughts (like self-doubt), based on the harebrained theory that good attracts good. Huge rap stars like Jay-Z, Kanye West, T.I. and many before them have turned cockiness and shameless self-promotion into an industry copied by wannabe M.C.s worldwide. But perhaps nowhere are the rewards for emphasizing style over substance higher than on TV. Pasta-maker infomercials and home-shopping networks give us a model for selling anything, including ourselves. Hulk Hogan defends his right to oil up his daughter. Donald Trump will fire your ass if you don't defend your right to be his apprentice, no matter what.

In an era of YouTube and 24-hour news cycles, nationally known politicians nowadays pretty much qualify as reality TV stars, so it doesn't seem incongruous for someone like Sarah Palin to put on the same incredible displays of arrogance that have defined the genre. The vice-presidential candidate would be right at home among the overconfident dingbats of reality TV -- "The Real World," "Survivor," "Rock of Love," "Big Brother" or whichever ones you bother with. Ever since Richard Hatch won "Survivor" with his scheming arrogance, ever since Omarosa became a household name by stabbing fellow competitors in the back with an icy smile on her face, reality TV has been defined by calculating villains with more swagger than actual talent. These days, programs are entirely based around overconfidence as a selling point. "The Pickup Artist," which recently began its second season on VH1, is hosted by a top-shelf breed of egotist in the form of Mystery, a Canadian illusionist born Erik Von Markovik who, with help from Neil Strauss' book "The Game," has turned hitting on women into a douche bag science. He has stuffed his (chain) wallet by hawking the truism that confidence is a turn-on in and of itself, a more important ingredient in success with the ladies than good looks, money or, God forbid, charm.

Over on Bravo, this season's "Project Runway" seemed to be editing all of its contestants' footage in order to make everyone sound like Marie Antoinette. Perhaps the producers wanted to recapture the magic of last year's winner, the pixieish Christian Siriano, whose barbs made him an audience favorite. Most of the individual interviews throughout the season made it seem as if a producer had just asked, “What's the most arrogant thing you could say about your own work, and the bitchiest comment you could make about someone else's?" Similarly, the girls on "America's Next Top Model's" 11th cycle have gotten into a little culture clash because the French model-in-training, Marjorie, and her uptight ally, Aline, refuse to play the confidence game, even while her housemates insist that the only way to succeed is to show confidence despite any shortcomings. The greater your shortcomings, apparently, the more confidence you need, often in the attempt to argue with viewers that your faults don't count -- a move typical of Palin's defenders, who think that anyone who criticizes her is just a hater. Marjorie has broken down in tears and admitted failure more than once, but she has won more challenges than her competitors. For her, confidence doesn't count so much as refining her performance. And there's a lesson in that.

Perhaps we've become so inured to all the posturing in rap and reality TV that now, when politicians show us the same type of empty swagger, we simply accept what they're serving, and even cheer them on. Last weekend, "Saturday Night Live" presumably hoped to embarrass Palin by writing an over-the-top, boastful rhyme about her and having her "decline" to perform it on the show's Weekend Update. But despite the bizarre Alaskan fantasia the show created, replete with fake show, pretend Eskimos and Amy Poehler shooting a guy in a moose costume with an imaginary handgun, Palin didn't look particularly uncomfortable or out of place swaying along to the beat or raising the roof when Poehler shouted, "All the mavericks in the house put your hands up!" Anyone who expected Poehler's performance to rival Stephen Colbert's skewering and roasting of George W. Bush at the White House Correspondents' Association dinner or even Chevy Chase's klutzy Gerald Ford impression must have been deeply disappointed. In order for the satire to have a real effect, Palin's discomfort needed to be palpable and make the audience squirm. Instead, the surge in "SNL's" ratings only amped up her star power.

The truth is, Palin would make a kick-ass reality star. "I think she could have her own show," Lorne Michaels recently told Entertainment Weekly. And according to a recent piece in the Hollywood Reporter, some TV execs have already started contemplating her exit strategy.  With any luck, her schedule will free up, and she can start taping in early November.