How John McCain ran against himself

The maverick of days past might be deadlocked with Obama now if he hadn't let the Republican right hijack the Straight Talk Express. 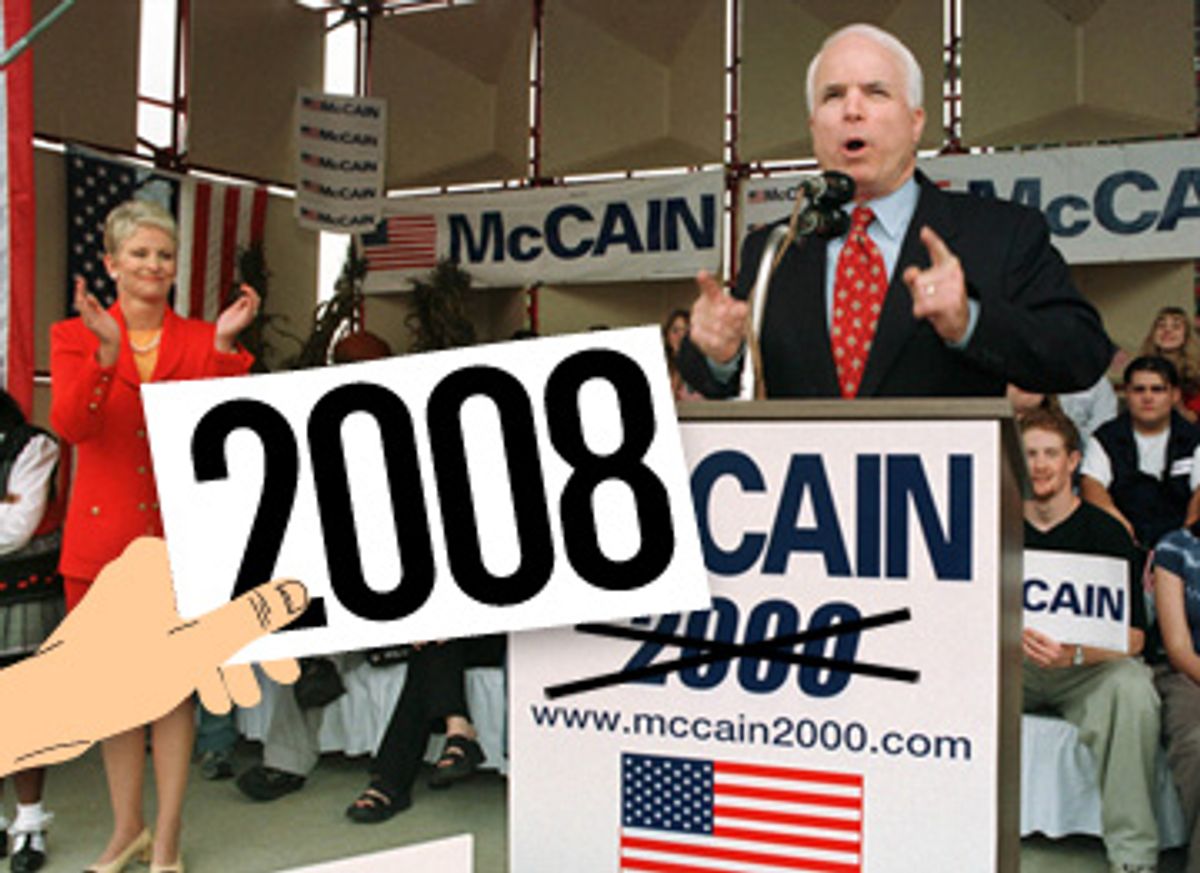 Just over the horizon lies an alternate universe in which John McCain is locked in a tense nail-biter of a presidential race with Barack Obama, one in which the polls gyrate daily and "too close to call" describes most of the contested political landscape. To create this what-if Republican fantasy, only one thing needs to be changed -- and that mystery element has nothing to do with a mythical Barack Obama scandal or an inexplicable surge in George W. Bush's approval ratings. All that would have been required to achieve electoral parity and a plausible road map to the White House would have been for the Republican nominee to have transformed himself into ... (Warning: Mind-bending content ahead) ... the John McCain of the 2000 primaries.

That was the fabled McCain who wooed reporters with nonstop rolling press conferences about the Straight Talk Express, who electrified independent voters in the New Hampshire primary with his clarion call for political reform and who late in the campaign denounced Jerry Falwell and Pat Robertson as "agents of intolerance." Make no mistake, McCain 2000 was an unabashed hawk ("rogue-state rollback" was his bellicose mantra) who never deviated from conservative orthodoxy on abortion (though he did give off the impression that rolling back Roe v. Wade was about 993rd on his list of life ambitions). Whether that candidate was the authentic McCain or an impromptu confection whipped up for a gullible press corps, the result was one of the most beguiling losing campaigns in modern political history.

This time around, the septuagenarian Arizona senator shrewdly (or cynically) decided from the outset that he would get right -- very right-wing -- with the Republican base. In mid-2006, when he still dreamed of replicating the front-runner juggernaut of the Bush campaigns, McCain paid homage to Falwell himself by giving the commencement address at Liberty University. Even though McCain was one of only two Republican senators to oppose the Bush tax cuts (liberal Lincoln Chafee was the other), he implausibly championed the cause of making them permanent.

McCain presumably believed that these sharp policy reversals were necessary to win the GOP nomination. But, in truth, McCain triumphed because fortune looked his way with a broad grin. (Never underestimate luck in politics -- think where Obama might be if, say, Hillary Clinton had aggressively contested the caucus states after Iowa.) McCain narrowly edged Mitt Romney in the 2008 New Hampshire primary because, according to exit polls, he was strongly favored by Republicans and independents who felt "dissatisfied" or "angry" with Bush. Where South Carolina had been McCain's primary of broken dreams, it became in 2008 his political land of enchantment: Fred Thompson lured just enough social conservative votes away from Mike Huckabee that McCain squeaked to victory.

While alternative history is inherently speculative, a reasonable case can be made that McCain could have won the 2008 Republican nomination even if he had not pandered to Falwell and had not abandoned his fiscal conservatism to compete with Romney on taxes. The victory formula would have been built around McCain's biography, his unorthodox style, his unstinting support for the surge in Iraq and the general feeling that eight years earlier the GOP made a tragic mistake with Bush. In short, McCain could have come out of the GOP primaries prepared to run against Obama as a true maverick rather than a generic Republican railing against socialism. All it probably would have taken are these four steps.

Run as a deficit hawk

A major reason why McCain has appeared so inept in the face of the financial meltdown is that he lacks a coherent economic philosophy. It defies logic that McCain could simultaneously be so outraged by congressional earmarks and so cavalier about giveaways in the tax code. Green eyeshade budget arithmetic may not make economic sense on the cusp of a deep recession, but it does appeal to traditional conservatives alarmed that the national debt has doubled under Bush. Remember McCain was a candidate who said during the 2000 Republican primaries, "I won't take every dime of the surplus and spend it on tax cuts that mostly benefit the wealthy." The Arizona senator also opposed the Medicare prescription drug bill because there was no way to finance it. A McCain tough on tax cuts and frugal about unfunded domestic programs might have had the credibility to turn his crusade against pork-barrel spending into a true test of political character.

Remember that Karl Rove drove the GOP to ruin

The Rovian philosophy that presidential politics revolves around mobilizing the conservative base in 2004 came within 120,000 votes in Ohio of costing Bush the White House. And that was when the Republican brand and Bush himself were comparatively popular. From the Falwell folly to the Sarah Palin pyrotechnics, McCain (the Sequel) has been far too politically obsessed with worrying about what social conservatives think of him. The answer should have been obvious -- the evangelicals and home-schoolers prefer McCain to Obama, if unenthusiastically. Rather than trying to arouse the base with ominous references to Bill Ayers, McCain should have realized early on that such shrill tactics do not play well with independents and moderates who were his original presidential constituency. As far as declaring war on the New York Times and shunning the reporters who once lionized him, that tactic only makes political sense if McCain's ultimate goal is to win an anchor job on Fox News when the campaign is over.

Risk a convention walkout over the V.P.

Behind-the-scenes reports hint that McCain picked Palin in pique over warnings that the GOP delegates would rebel over the selection of apostate Democrat Joe Lieberman or even pro-choice Pennsylvania Republican Tom Ridge. Campaign strategists are so afraid of televised controversy that they never considered that the best way to demonstrate political independence is to actually do something bold when the entire nation is watching. Had McCain taken on the social conservatives in a convention floor fight, voters would still be talking about the GOP nominee's maverick moxie. At the 1948 Democratic convention Harry Truman (aka McCain's patron saint) stared down a Dixiecrat walkout over the party's civil rights plank. At a time when Palin's picture will soon appear next to the metaphorical definition of albatross, it is clear that McCain should have taken his lumps with Lieberman or risked a ruckus over Ridge. Even Romney would have allowed McCain to argue that Obama is not ready for the rigors of the Oval Office without triggering derisive laughter.

Repeat and repeat: "I am not George Bush."

Yes, McCain finally uttered those magic words during the final debate. And he ripped into Bush for his initial blundering conduct of the Iraq occupation, his doubling of the national debt and his neglect of climate change in an off-message post-debate interview with the conservative Washington Times. But this is pretty late in the game to break with a president whose performance in office is given a thumbs-down rating by three-quarters of the voters. McCain's belated criticisms are akin to Thomas Jefferson writing the Declaration of Independence in 1815. As McCain knows well, there is a persuasive conservative case to be made against Bush for his free-spending big-government fiscal recklessness, for his trampling of constitutional norms (from vice-presidential sanctioned torture to White House signing statements) and for his record of incompetence from New Orleans to Baghdad. Instead of wasting time at the GOP convention on chants of "Drill, baby, drill," that was the moment to try out cries of "Bye, Bush, bye." If all the loyal Bushies stayed home in November in protest, McCain might lose as many as a dozen Texas votes in the greater Crawford metroplex.

The Bush stigma may be so indelible that it is possible that not even the return of Ronald Reagan could save the 2008 GOP nominee from voter backlash. But unlike, say, Adlai Stevenson or Barry Goldwater, McCain probably cannot even derive satisfaction from knowing that he ran an uplifting campaign in an impossible political climate. That is the apparent problem with McCain's Faustian bargain -- it has brought him neither honor nor votes. McCain (the Original) might not be winning right now, but the odds are that the race would be far closer in 2004 Democratic states like New Hampshire, Pennsylvania, Wisconsin and Minnesota. If nothing else, the candidate who led the McCain Mutiny in 2000 might be going out as a Happy Warrior not as a political chameleon who has lost any sense of his true identity.