In the state that broke Democratic hearts in 2004, favorable poll numbers and a wave of early voters could point to victory. 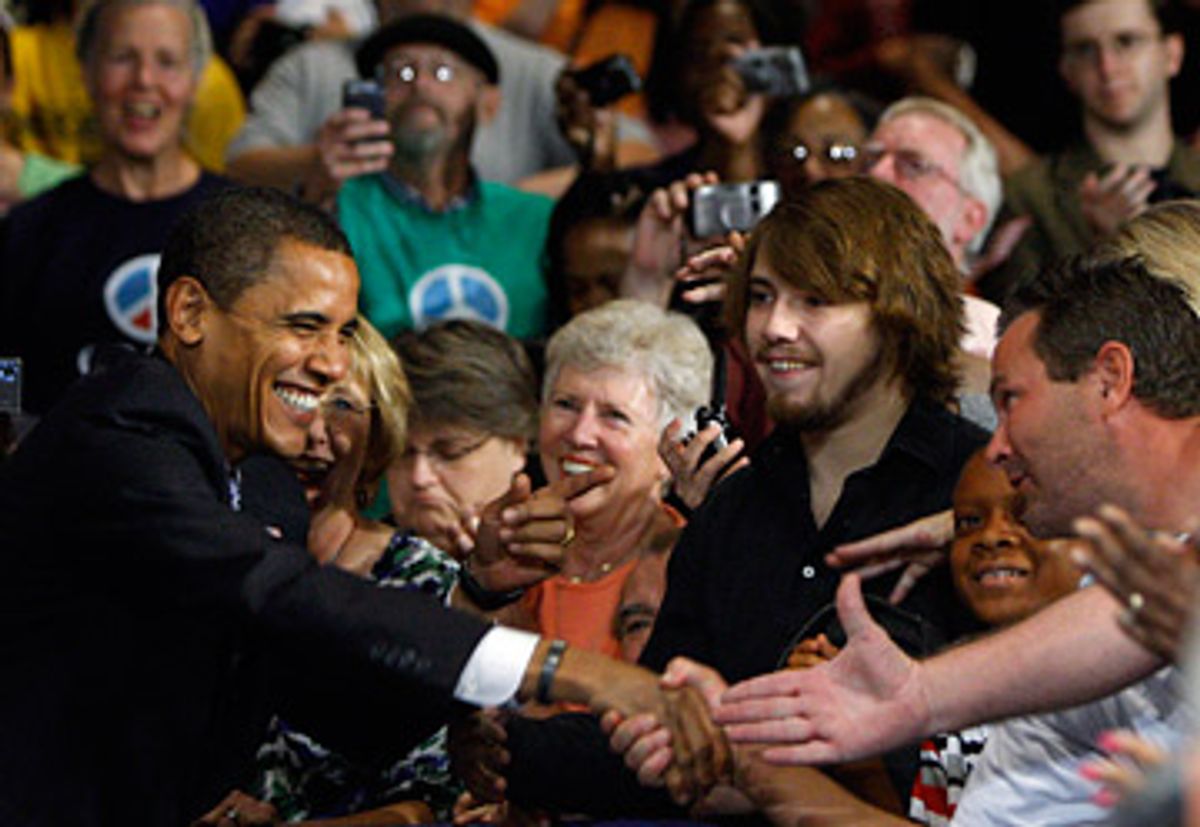 The Buckeye stops here. Ohio is where Democratic dreams died four years ago as John Kerry came up 120,000 votes short of winning the state's 20 electoral votes and the White House.

But this year all the signs and portents are pointing in the opposite direction. Barack Obama has led in the last 11 published statewide polls, breaking the 50 percent threshold in the most recent survey released Thursday. Unlike 2004, the Democrats control the levers of state government, with Secretary of State Jennifer Brunner now portrayed by the Republicans as being as overtly partisan as her notorious GOP predecessor Ken Blackwell.

With all this good fortune, no wonder prominent Democrats are nervous. "This is not over until 7:30 on the night of Nov. 4 when the polls close," said Columbus Mayor Michael Coleman, an early and avid supporter of Obama. "I know the other side will do all they can -- say anything -- to discourage the vote and to sway voters and persuade them. I hope it doesn't get any nastier from the other side. And we have to turn out our vote. Voter turnout is the key."

That explains why the downtown Veterans Memorial building on the banks of the Scioto River has the frenzied look lately of O'Hare Airport on the day before Thanksgiving. Shortly after 2 on Thursday afternoon, more than 700 residents of Franklin County (Columbus and its close-in suburbs) were patiently standing in the early-voting line that snaked up a long staircase and across the second floor before finally reaching the nirvana of the polling stations. Jerry Garner, an African-American engineer who supports Obama, clocked his wait at precisely two hours and 12 minutes. A deputy sheriff monitoring the good-natured queuing joked, "I feel like I'm at Disney World."

Even though once reliably Republican Franklin County has been trending Democratic in recent years (Kerry won here by 48,000 votes in 2004 while Al Gore eked out a 5,000-vote margin in 2000), the early-voting center seemed like an intergenerational Obama rally. From partisan social workers to suburban librarians to cellists from the imperiled Columbus Symphony, this was a Tina Fey -- not a Sarah Palin -- crowd. McCain, in fact, will be in Columbus Friday afternoon accompanied not by Palin but by a political figure more apt to appeal to independents in Ohio's largest city -- Arnold Schwarzenegger.

After conducting an informal entrance poll for almost an hour, I encountered exactly one John McCain voter. Monica Ralph, a nurse at the Ohio State University hospital, said, "I'm generally a Republican, but it was a hard choice. I'm not in love with any of them." Ralph was part of a three-generation tableau on the line since she was accompanied by her daughter Meghan Gilbert (also a nurse at the OSU hospital) and her grandson Elliott. But the two younger generations of the family are fleeing their GOP heritage. Gilbert, who voted Republican in 2004, explained, "Bush did this to me on his own. But I'm pretty excited about Obama, though." As for the sleeping Elliott, who is 5 months old, his mother proudly announced, "He's definitely a Democrat."

This is the first year that in-person early voting has been permitted in Ohio, so there are no easy comparisons of turnout figures. Due to a shortage of voting machines in Franklin County in 2004, Election Day waits of as long as four hours were common; anecdotal evidence suggested that thousands of potential Kerry voters went home without casting a ballot. This time around, not only is the Obama campaign encouraging early voting, but Democrats are apt to be motivated on their own to come down to the Veterans Memorial to beat the Election Day traffic.

Still, with all the caveats in the world, the cheerful bedlam at the Veterans Memorial reminded me of caucus night in Iowa when for the first time (but not the last) the Obama campaign demonstrated that it could boost turnout to unimagined levels.

Republicans argue -- and they make a plausible case -- that the Obama campaign is doing nothing more than convincing its base to ballot early. As Jon Seaton, the McCain regional campaign manager who oversees Ohio and Pennsylvania, said in a Thursday afternoon interview, "If all you're doing is turning out people who will vote on Election Day anyway, it doesn't matter much. A vote is a vote."

About 100 hours before the first Election Day votes are cast, political mavens (campaign insiders, reporters and committed voters) are all simultaneously drowning in a sea of potentially misleading data and are parched for the only information that truly matters -- actual voting returns. So it is easy to vibrate from constantly hitting the refresh button on the computer in quest of new polls to concocting elaborate theories of the campaign based on anecdotal information.

This period of uncertainty, when the debates are over, the campaign strategies set and the bombshells presumably dropped, is disorienting in normal presidential years. But this campaign -- and here both Republicans and Democrats can agree -- has been anything but normal. So that may explain why sitting in Columbus (ground zero for the 2004 campaign) feels a little like being onstage in a production of "Waiting for Godot."