The Republican base greets its true leader in small-town Pennsylvania. And hits me with a car. 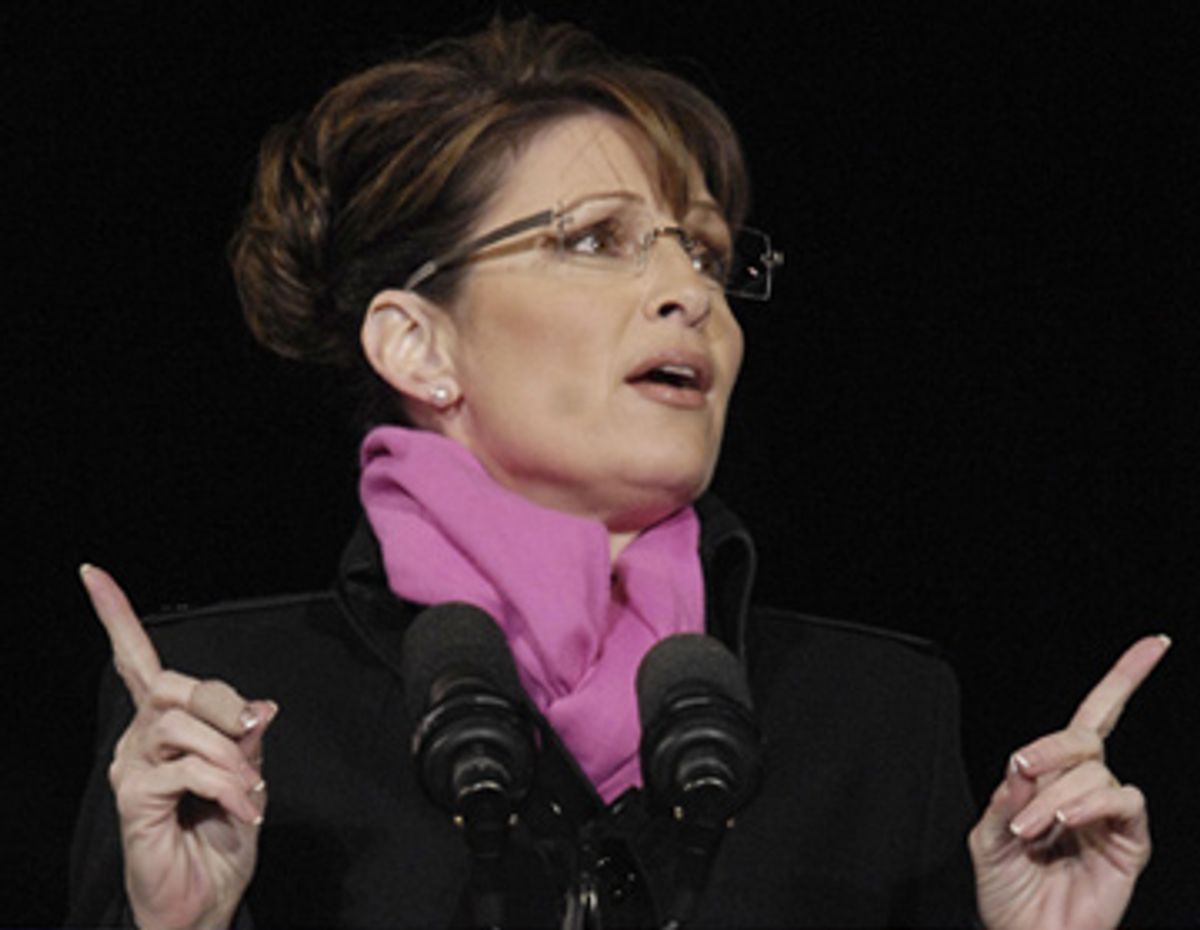 You would be too, if, five days before you and your running mate were possibly going to blow a presidential election in a big way, you could draw a crowd of 13,000 people to an outdoor baseball stadium in the near-freezing cold. How could you not have supreme confidence about your future in politics when your lollapalooza-level turnout took place in the same northern Pennsylvania town and on the same day that your direct competitor, the guy on the ticket that's lighting up polls around the country, managed to pull a crowd of only around 400 into a temperature-controlled college gymnasium?

Welcome to Williamsport, Pa., where on one fresh-sliced Oct. 30, less than a week before the general election, Democratic vice-presidential candidate Joe Biden and his Republican counterpart, Sarah Palin, rallied within three hours and three miles of each other, to far different effect.

Biden, sounding tired but loud, had a simple task: push back against the Republican attack machine currently sweeping through Pennsyltucky, telling voters that Barack Obama is a socialistic, gun-stealing, Joe-the-Plumber hating, terrorist-associating spiller of innocent fetal blood. In traditionally red, rural, religious counties, Biden's job is to remind voters that Democrats can speak to them about their lives as fluently as that Thrillah from Wasilla.

"I was born and grew up in Scranton," began Biden, before saying hello to Sister Ann, one of his former teachers from St. Paul's Catholic school in that nearby city; throwing out some love to the newly minted World Champion Philadelphia Phillies; and bragging about his wife, Jill, appearing on local WIP sports radio. Biden acknowledged the impending arrival of Palin to Williamsport, noting that "she's a good person," but that as "Bobby Casey" (for you outsiders, that's devoutly Catholic, pro-life and popular Dem Sen. Robert Casey Jr.) has said, Palin and McCain can't be mavericks if they're really Bush sidekicks. (Reason No. 268 that Election Day cannot come soon enough: no more maverick-sidekick lipstick-dipstick jokes.)

"Almost everywhere we're going is deep in red territory," said Biden's campaign spokesman David Wade as the senator spoke, acknowledging that the Palin rally would surely be a bigger draw in these parts, but that Biden's presence often takes the edge off. Obama's "defender in chief," as Wade called Biden, is a known quantity in Williamsport. "There's a little bit of Scranton in all these red counties."

But that redness, said Wade, means Pennsylvania "is always a down-to-the-wire state. Republicans have always had this theory that if they can distract, and raise character issues, they can win it."

Distractions and characters were very much in play at the Palin rally, where the line of people who had been waiting for her 7:30 appearance since before 2 was getting ever more labyrinthine. One woman was coloring in an unironic "I {heart} S & M" sign -- that's for "Sarah" and "McCain" -- while a man dressed in full Hillary Clinton regalia was insisting that he/she was at the rally because "Obama ditched me." Mostly, though, people were shivering with cold and anticipation, to see this election cycle's Republican rock star.

"The media may not be portraying Sarah as popular," said Ellen Margraff, "but look around." Indeed, the size and ardor of the crowd recalled nothing so much as a Barack Obama rally, the ones that the media covered so breathlessly during the primaries and through Thursday, when he spoke at three rallies in three states, Florida, Virginia and Missouri, and drew as many as 10,000 each time. The polling on Palin may be terrible, conventional wisdom may insist that she has been a drag on the ticket -- as Rachel Maddow argues, she could be "the single biggest anti-buoyancy agent of the McCain/Palin campaign." But when you see one of these things -- with the fans with their blankets and their buttons, their Christian literature and thundersticks in tow -- there is a disconnect between all that conventional wisdom and the Palin fever that seems to be burning hotter than ever through the Republican base.

"She's not with the Washington elite," said Margraff. "She is a true person who stands by her beliefs."

"I've come to see Sarah, our next vice president of the United States!" shouted Gloria Gordon, a 64-year-old police officer. "Everything she says, I agree with 100 percent of it." Should McCain and Palin fall short of their goals next Tuesday, "She'll be president in 2012," assured Gordon without missing a nanosecond.

"I'm a strong woman, and I really relate to strong women," explained 67-year-old Gloria Stere, who wore a bright blue Palin Power T-shirt. Stere said she had just retired from running her own sewing machine business, and though a "dyed-in-the-wool Republican," she had considered -- just thought about -- voting for Hillary Clinton. But, she was quick to add, "Palin is the one that absolutely made my mind up about supporting John McCain. I took one look at her, heard her speak, and thought, 'Oh my god,' she is the one."

"Even if they don't win the election I'll still be impressed by her," said Diane Ellis, a 9th grade American history teacher. "Hopefully in the next four years the Republican Party will realize what they have there -- and maybe even bring her on as presidential candidate. She and Hillary going at it -- that's what I'd like to see."

Finally, about an hour before Palin's scheduled arrival, Bowman Field kicked off its pre-party with the National Anthem sung under the giant flag suspended from a crane over the "Victory in Pennsylvania" sign. A security sniper ogled the chilly crowd with his night-vision glasses, and a local minister took the stage to offer a benediction that hit the trifecta of guns, gays and abortion. The preacher asked forgiveness "for so many [who] have shed innocent blood through the course of abortions, and so many [who] would stop the sanctity of marriage between a man and a woman." With these abominations in mind, the preacher continued, "Thank you for raising up a woman like Gov. Sarah Palin at a time like this. Bless her for standing against those who would remove the guns from our cabinets, and those who would want to remove the baby from the womb of her mother. Bless her family as they adjust to changes in their lives that are going to be taking place on Tuesday."

But the change most likely to come in Palin's life on Tuesday is that she will no longer have to take second billing to John McCain, who was speaking to hundreds in Ohio while she was drawing throngs in Pennsylvania. Before Palin took the stage, the sound system blared the metal ballad "Here I Go Again," by Whitesnake, as in "Here I go again/ On my own" and "Like a drifter I was born to walk alone." The choice of overtures did little but bolster the theory that she is becoming one of those "rogue leaders" people are always talking about, ready to leave this immolating campaign behind and assume her rightful place as patron goddess of a rebel, socially conservative GOP faction. As Whitesnake played, and the crowd got increasingly hot for Palin, they waved signs like "Read my lips: country first!" and "Julianna's mommy is voting for Piper's mommy!"

When Palin walked out in a black coat and fuchsia scarf, First Dude Todd in a dress shirt and tie covered by a track-suit-style pullover, the crowd behaved as though it were on Oprah's "You get a car! You get a car!" episode. There was pushing and screaming and waving and yelling and "Oh my god, Todd's so cute"-ing.

Palin was her down-home bestest, peppering her brief address with references to the First Dude's four snow-machine world championships, a lot of gratitude toward the veterans in the crowd, and a lot of folksy, g-droppin' references to how "the time for choosin's comin' real soon," a golden-oldie reference to Ronald Reagan's famous 1964 speech in support of Barry Goldwater. Combined with Palin's repeated use of the phrases "You betcha!" and "Drill, baby, drill!" and  her guess that the crowd was "so doggone proud" of the Phillies, and her environmental justification that "God has so richly blessed this land with resources" that we should probably strip-mine it, Palin seemed to be imitating Tina Fey's imitation of her on "Saturday Night Live."

Palin did go about 10 rounds with a very imaginary Barack Obama, at one point suggesting that his tax ideas "sound like socialism," and that "they do that in other countries where people are not free." Palin went on to make a direct -- if a tad dramatic -- plea to her adoring masses. "If you don't want your dreams dashed by the Obama tax increase plan, then we're asking for your vote. Pennsylvania, will you hire us?"

The crowd cheered in affirmation, and behind me, a woman's voice could be heard picking up her phone and telling whomever was on the other line, "I'm at Sarah Palin! Where else would anyone be?" After a pause came, "I can't see her shoes from where I'm standing. I don't know which boots she's wearing." Further behind her still, a male voice yelled, "John McCain, not Barack Hussein!"

"The time of choosin's comin' so near," Palin said again, sounding less like she was talking of Election Day and invoking Reagan and more like she was waiting for the Keymaster from "Ghostbusters." "In the end, what John McCain and I believe in is what Ronald Reagan believed in ... we believe that America is still that shining City on a Hill that Ronald Reagan used to speak of."

But, alas, the model of Christian charity did not seep out into the Bowman Field parking lots. While I was interviewing some of the attendees, accompanied by another Salon staffer who was holding a video camera, a Palin fan in a newish silver sedan drove by and hit me hard in the back with the side mirror of the car, hard enough to bend the mirror back. Then the car drove off without anybody inside pausing to ask if I was all right. The middle-aged woman in the passenger seat, however, might have saluted me with an un-Christian hand gesture.

But no hard feelings, ma'am. I will just console myself that, as Sarah Palin says, the time for choosin's comin' near.