John McCain's running mate thinks that the Constitution protects political candidates from being criticized by the press. 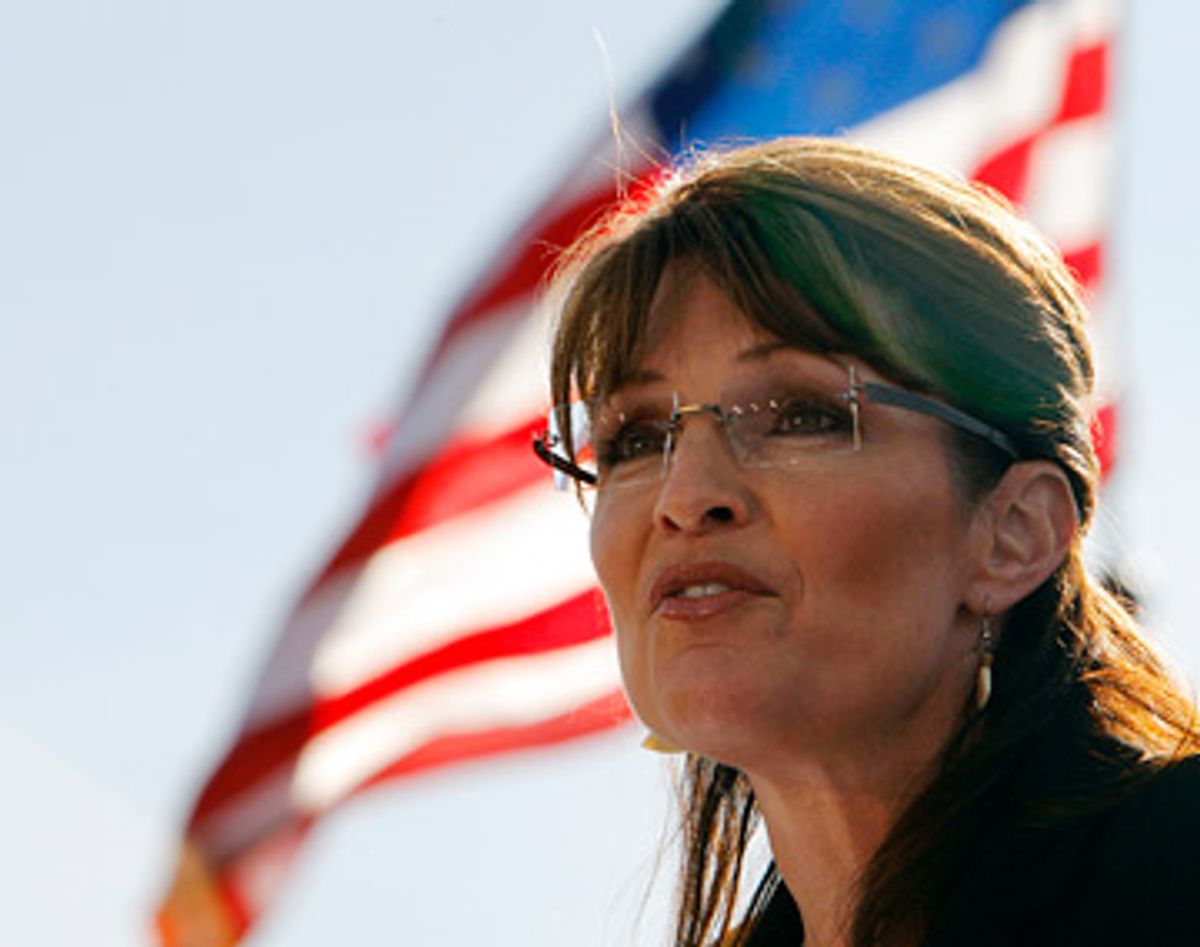 Somehow, in Sarah Palin's brain, it's a threat to the First Amendment when newspapers criticize her negative attacks on Barack Obama.  This is actually so dumb that it hurts:

In a conservative radio interview that aired in Washington, D.C. Friday morning, Republican vice presidential nominee Gov. Sarah Palin said she fears her First Amendment rights may be threatened by "attacks" from reporters who suggest she is engaging in a negative campaign against Barack Obama.

Palin told WMAL-AM that her criticism of Obama's associations, like those with 1960s radical Bill Ayers and the Rev. Jeremiah Wright, should not be considered negative attacks. Rather, for reporters or columnists to suggest that it is going negative may constitute an attack that threatens a candidate's free speech rights under the Constitution, Palin said.

"If [the media] convince enough voters that that is negative campaigning, for me to call Barack Obama out on his associations," Palin told host Chris Plante, "then I don't know what the future of our country would be in terms of First Amendment rights and our ability to ask questions without fear of attacks by the mainstream media."

Maureen Dowd recently made an equally stupid comment when she complained that her First Amendment rights were being violated by the McCain campaign's refusal to allow her on their campaign plane.

The First Amendment is actually not that complicated.  It can be read from start to finish in about 10 seconds.  It bars the Government from abridging free speech rights.  It doesn't have anything to do with whether you're free to say things without being criticized, or whether you can comment on blogs without being edited, or whether people can bar you from their private planes because they don't like what you've said.

If anything, Palin has this exactly backwards, since one thing that the First Amendment does actually guarantee is a free press.  Thus, when the press criticizes a political candidate and a Governor such as Palin, that is a classic example of First Amendment rights being exercised, not abridged.

This isn't only about profound ignorance regarding our basic liberties, though it is obviously that.  Palin here is also giving voice to the standard right-wing grievance instinct:  that it's inherently unfair when they're criticized.  And now, apparently, it's even unconstitutional.

According to Palin, what the Founders intended with the First Amendment was that political candidates for the most powerful offices in the country and Governors of states would be free to say whatever they want without being criticized in the newspapers.  In the Palin worldview, the First Amendment was meant to ensure that powerful political officials such as herself would not be "attacked" in the papers.  Is it even possible to imagine more breathtaking ignorance from someone holding high office and running for even higher office?

UPDATE:  The Constitution also guarantees freedom of association.  Thus, by Palin's "reasoning," when newspapers -- or Palin herself -- criticize Obama for his associations, they're threatening his constitutional rights.

If the conservative media convinces enough voters that Barack Obama is a Muslim, does that violate his right to freedom of religion?

And:   isn't Palin violating the First Amendment right to a free press by criticizing the media and convincing her followers that newspapers are biased and corrupt?  For the last eight years, we've had an administration that has had pure contempt for the Constitution.  Would it be worse to replace them with people who seem never to have read it?

UPDATE III:  Jonathan Schwarz has the audio of Palin, issuing her constitutional warning, here.  It's actually more painful to hear it than read it, because you can hear her thinking about the analysis she's making as it leaves her mouth, and she clearly believes she's actually making an important and profound point about First Amendment rights.