Where McCain's luck could run out

George W. Bush won Nevada twice -- but the Obama campaign is doubling down on its ground game here and looking flush. 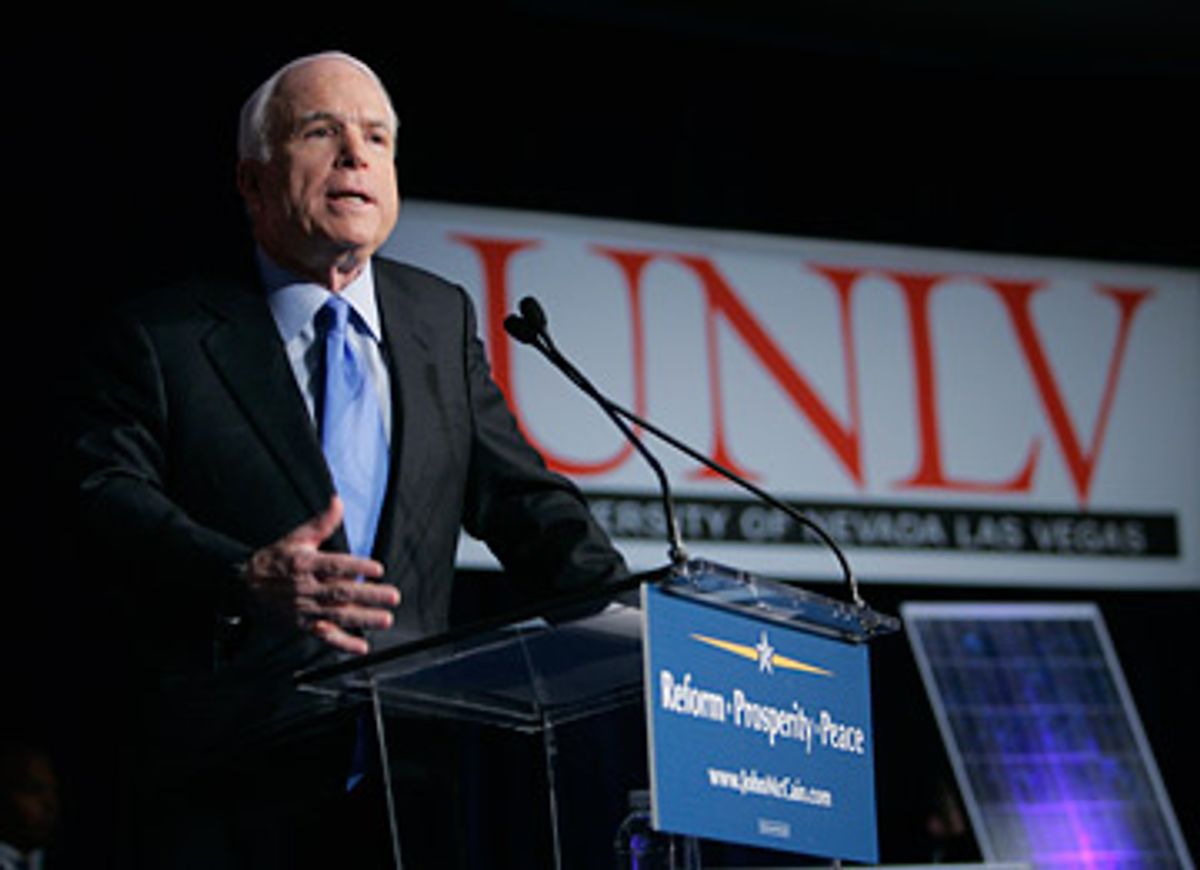 John McCain has always been a gambler, so he must be looking forward to an election eve stop here in a couple of days. Even if the last-minute rush to the end of the campaign won't leave him much time on the schedule to hunt down a craps table, he can always drop a few coins in a slot machine at the airport on his way out.

But by the time he gets here Monday, McCain may need to do something to change his luck in Nevada, because he'll almost certainly head into Election Day down in the state's polls. And that's not good news for the GOP: Nevada -- like most of the battlegrounds where he and Barack Obama will be spending their final weekend on the trail -- is a state George W. Bush won twice. At least half of the total ballots cast will probably be banked already by Tuesday morning, thanks to a two-week early vote period that ended Friday night. Nevada only has 1.2 million registered voters, and as of Wednesday night, 443,085 of them had already voted.

The trouble for McCain is that in the state's biggest counties -- Clark, which includes Vegas, and Washoe, where Reno is -- he appears to be losing his shirt faster than a problem gambler on the strip with a roll of quarters burning a hole in his pocket. In Clark County, 52.5 percent of the ballots cast have come from Democrats, compared to 30.4 percent from Republicans and 17.2 percent from independents, according to stats compiled by Michael McDonald at George Mason University. In Washoe, Democrats are leading by a margin of 47.8 percent to 35 percent in the turnout of early voters, with 17.2 percent independent. Even if independents are splitting evenly (though polls indicate they're probably leaning toward Obama), McCain has to win the day-of voting on Tuesday by a big margin in order to make up the gap and hold Nevada's five electoral votes.

Another bad sign for McCain: Since 2004, registered Democrats have increased their numbers rapidly. On Election Day four years ago, Republicans outnumbered Democrats by 5,000 voters. Bush won by only 20,000 votes. Meanwhile, heading into this election, Democrats outnumber Republicans by 101,000.

Obama's campaign, though, is trying not to get complacent. "John Kerry did pretty well in the early vote, and not so well on Election Day, and he lost," said Kirsten Searer, Obama's Nevada spokeswoman. Obama was in Vegas a week ago, and he'll be back in the area Saturday morning for an early rally in the southern suburbs. At the campaign headquarters, staffers had overflowed the available desks; a few people had moved their laptops to a picnic table outside, running a long extension cord back into the office to get power and keep working.

Obama's field offices were equally busy, as volunteers and staff pushed to get last-minute votes out so they don't have to worry about them on Tuesday. "Every voter we have is more than likely a supporter," said Gaby Baca, 22, a field organizer in one of Obama's two North Las Vegas offices, as she prepared about 20 volunteers to hit the streets in mostly working-class, Latino neighborhoods nearby, a few hours before early voting ended Friday. "Now it's a matter of turning them out."

Besides being Halloween, Oct. 31 is a state holiday in Nevada -- Nevada Day -- so Baca expected her canvassers to find people at home in the late afternoon. In her Nevada Assembly district, only 25 percent of the 6,000 eligible voters had cast a ballot during the two-week early voting period, and Baca was trying to inspire her volunteer corps to drag another couple of thousand people out before trick-or-treating or other Friday night plans got in the way. "What we're doing out here is so important," she implored them.

Up the road a few miles, a crowd of early voters had already turned out at the Boulevard Mall. "I sleep during the day, and I work at night," said Ambrosio Ortiz, 64, a produce worker from Las Vegas who roused himself to come vote early for Obama so he didn't have to worry about it on Tuesday. About 30 voting machines were running constantly, but lines weren't too long; voters reported waiting about 20 minutes at most to cast their ballot. An admittedly unscientific survey of people in line or leaving the polls turned up no McCain supporters, underscoring the heavy Democratic tilt in the early voting turnout.

"For the past eight years we've seen so many things go down the toilet," said Matt Parsons, 28, a registered independent who voted for Kerry four years ago and didn't vote in 2000. He was waiting in line to vote for Obama. "We need somebody who's at least going to try to reverse that." His wife, Grace, was also voting for Obama, noting that she owes $16,000 in medical bills from when she got sick a few years ago before the couple got health insurance.

Obama's aides estimate 43 percent of the Democrats who have turned out so far in early voting are either first-time voters or sporadic voters, who may or may not bother participating when an election comes around. "The die is being cast as we speak," campaign manager David Plouffe told reporters on a conference call Friday morning. "Sen. McCain, on Election Day, is going to have to not just carry the day but carry it convincingly."

Republicans, though, say they're ready. McCain's supporters tend to be older and less likely to vote early than Obama's; McCain aides think the Obama edge in the early vote means there won't be many Democrats left by Tuesday. "The Obama supporters in Nevada have been waiting eight years for the first day of early voting," said McCain's regional campaign manager for the West, John Peschong. "The McCain-Palin campaign will turn out our vote on Election Day."

Sarah Palin's parents dropped by some Republican phone banks here late this week, in an effort to boost the spirits of volunteers. The campaign has been pulling resources from other Western states to Nevada for the final push; volunteers will come in from neighboring states to knock on doors and call supporters over the weekend, when the Republicans' get-out-the-vote program really begins in earnest.

"We set up goals five months ago," Peschong told me outside the McCain headquarters in Henderson. "We've exceeded our goals every week."

Although polls show Obama leading by a decent margin in Nevada, McCain aides think it's tied. "If this race was really [done], Barack Obama would be holding a rally in some other battleground state," Peschong said.

In the end, the trouble for McCain's team is that the Obama campaign may also be exceeding its goals -- goals akin to doubling down on the ground game. Last weekend alone, Obama volunteers knocked on 150,000 doors, and they're planning to hit even more this weekend: Precinct captains are supposed to knock on the door of every supporter in their territory who hasn't voted yet three times before Tuesday. McCain could well turn out every one of his supporters in the Silver State and still find he's behind -- as Obama's massive organization may be presenting him with the kind of odds that the casinos thrive on.