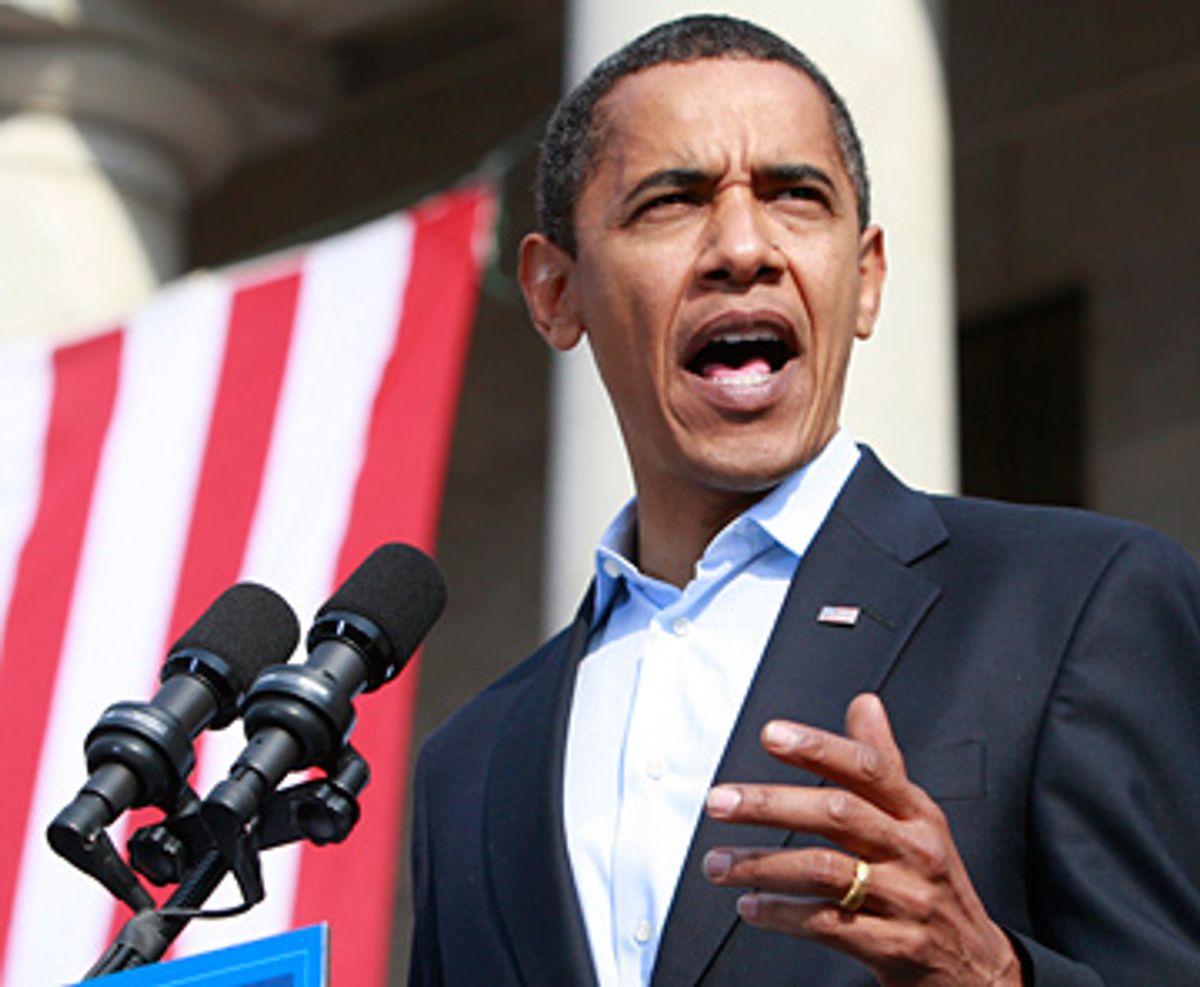 If Barack Obama wins on Tuesday -- like most Democrats, I'm too superstitious to use the term "when" -- we'll be sorting through the reasons for a long time. The economic crash, and John McCain's lame response, will be high on everyone's list. So will the Sarah Palin bounce, in which the GOP ticket took flight after the convention but then bounced out the window, and now seems headed for a tough landing on Tuesday. We'll hail the incredible Obama ground game, that first swept away the Clinton juggernaut and then put red states like Virginia, Nevada, Iowa, Colorado, even, allegedly, Montana, back in political play, and turned at least some of them blue.

Ironically, for a guy who has been hailed as the Messiah, the One and even "that one," Obama himself may never get all of the credit he deserves personally, for the way he genuinely made himself a better candidate over the course of a 20-month campaign.

Rather unbelievably, given that he  launched his national career with a 2004 speech, he even made himself a much better speechmaker. It's clearly Obama's evolution as a candidate that let him take advantage of McCain-Palin stumbles and come within reach of victory (that's as far as I'll go) on Tuesday.

I watched Obama speak Sunday in Columbus, Ohio, and even though huge chunks of it were the same as the speech I watched in Springfield, Mo., yesterday -- yes, I need to step away from the television set -- it was riveting. But I had a vague memory of watching an earlier Obama speech in Columbus during the primary campaign, and I went looking for it. It was Feb. 27, a week before the primary that he lost to Clinton. Comparing the two pitches side by side, you get a real sense of how Obama's appeal has improved over the last eight months.

First a few top-line comparisons: The February speech was almost twice as long, talked extensively about Obama himself, diagnosed the nation's problems early but saved solutions for the last quarter, and emphasized his generic appeal for hope, change and trancending ideology. Now, you could defend all those rhetorical differences as situational: Obama's now running in 50 states and doesn't have the time for single speeches he had back when he was focused on a few upcoming primaries; he was still introducing himself and his generic appeal to the American people. Still, I would argue – and I did argue this, during the primary -- that his airy, unfocused earlier speeches played a role in his losses in Ohio, Pennsylvania and later primaries. The tough, focused, populist Obama of October and November might well have defeated Clinton in those states.

Well, we have had a wonderful few days campaigning all across Ohio. We had a terrific debate last night in Cleveland. We’ve got a couple of good strong Democrats on stage; looking forward, one of us, to a general election. It made me think about the work that has gone into this campaign. It’s now over a year old. It’s been more than a year since I stood on the steps of the Old State Capitol in Springfield, Illinois, the city where Abraham Lincoln served for many years before he went to Washington, where I served before I became a United States Senator. I stood on the steps of this old state capitol and I announced this unlikely journey to change America.

I have to say that at the time there were a lot of people who said, “Why are you running this time? You’re a relatively young man. Why are you running so soon? You can afford to wait.” That’s what they said. And I had to explain to them that I’m not running because of some long-held ambition. I know that people were looking through my Kindergarten papers, but that’s not why I decided to run. I’m not running because I think it’s somehow owed to me. I am running because of what Dr. King called “the fierce urgency of now,” because I believe that there is such a thing as being too late. That hour is almost upon us.

Ohio, I have just two words for you: two days.

After decades of broken politics in Washington, eight years of failed policies from George Bush, and twenty-one months of a campaign that has taken us from the rocky coast of Maine to the sunshine of California, we are two days away from change in America. In two days, you can turn the page on policies that have put the greed and irresponsibility of Wall Street before the hard work and sacrifice of folks on Main Street. In two days, you can choose policies that invest in our middle-class, create new jobs, and grow this economy so that everyone has a chance to succeed; from the CEO to the secretary and the janitor; from the factory owner to the men and women who work on its floor.

In two days, you can put an end to the politics that would divide a nation just to win an election; that tries to pit region against region, city against town, Republican against Democrat; that asks us to fear at a time when we need hope. In two days, at this defining moment in history, you can give this country the change we need.

Both speeches close with meditations on the meaning of hope. Here's February:

That is what hope is: imagining and then fighting for, then struggling for, that which did not seem possible before. And that is the opportunity we have right now. That’s the chance we have right now in this election, if you vote, if you are willing to go forward. There is a moment in the life of every generation when that spirit of hope has to come through, when we cast aside the fear and the doubt, where we don’t accept what the cynics tell us we have to accept, when we instead reach for what is possible, when we insist that the next generation deserves the same chance that somebody gave us, when we demand that we keep the American dream alive. For those who still hunger for justice, still thirst for opportunity, when we decide to come together, arm in arm, and remake this country block by block, county by county, state by state, this is our moment.

Ohio, that’s what hope is. That’s what kept some of our parents and grandparents going when times were tough. What led them to say, “Maybe I can’t go to college, but if I save a little bit each week, my child can. Maybe I can’t have my own business but if I work really hard my child can open up one of her own. It’s what led those who could not vote to say “if I march and organize, maybe my child or grandchild can run for President someday.” That’s what hope is—that thing inside that insists, despite all evidence to the contrary, that there are better days ahead. If we’re willing to work for it. If we’re willing to shed our fears. If we’re willing to reach deep inside ourselves when we’re tired, and come back fighting harder.

It's not that the February meditation on hope wasn't moving; of course it was. But November is more visceral, he's using concrete examples, speaking in the voice of working-class parents saving to send their kids to college; civil rights pioneers organizing to get the vote. Side by side, it's clear the November speech is immeasurably better: sharper, crisper, faster, funnier, more pointed, more poignant. Just contrast one last section, on taxes. From February:

We are going to make sure that we have a tax code that’s fair. We’re going to roll back those Bush tax cuts to the wealthiest Americans and give them to hard-working Americans who deserve it, making $75,000 a year or less. $1,000 to offset your payroll tax per family. If you’re a senior citizen making $50,000 a year or less, you shouldn’t have to pay taxes on your Social Security. We’re going to give an additional mortgage deduction to people who live in modest homes if you don’t itemize it on your payroll tax and save them a little bit of money and make it easier for them if interest rates go up.

The choice in this election isn’t between tax cuts and no tax cuts. It’s about whether you believe we should only reward wealth, or whether we should also reward the work and workers who create it. I will give a tax break to 95% of Americans who work every day and get taxes taken out of their paychecks every week. And I’ll help pay for this by asking the folks who are making more than $250,000 a year to go back to the tax rate they were paying in the 1990s. No matter what Senator McCain may claim, here are the facts – if you make under $250,000, you will not see your taxes increase by a single dime – not your income taxes, not your payroll taxes, not your capital gains taxes. Nothing. Because the last thing we should do in this economy is raise taxes on the middle-class.

There's just no comparison, the November pitch on taxes is much more clear and convincing. And you can pretty much do that on every issue, throughout both speeches.

But while I'm praising the things Obama has changed about his appeal since the primaries, I should also note, and praise, the things he hasn't changed. I wanted to hear a more economically populist pitch from him back during the primaries, and I'm happy I'm hearing it now. Far from hurting Obama, it's clear the long primary season and the Clinton campaign made him a better candidate. Still, during the primaries and after, I wanted more fire and fight from Obama, and I think I was wrong about that. It's becoming a cliché, but Obama's even temperament, his calm and his unflappability, seem to be made for this uncertain moment in American history. In all three debates, I worried he missed opportunities by not taking the fight more directly to John McCain, but each time polls of undecided voters, who overwhelmingly favored Obama, told me I was wrong.

So I felt he was talking to me, personally, when he responded to Rachel Maddow's question about why he doesn't criticize conservatives and Republicans more: "I think we're winning right now. Maybe I'm doing something right." I underestimated Obama early in this race and I won't make that mistake again. I'll be on MSNBC's "Race for the White House" Sunday night at 10 p.m. ET, 7 p.m. PT, to talk about all of it.