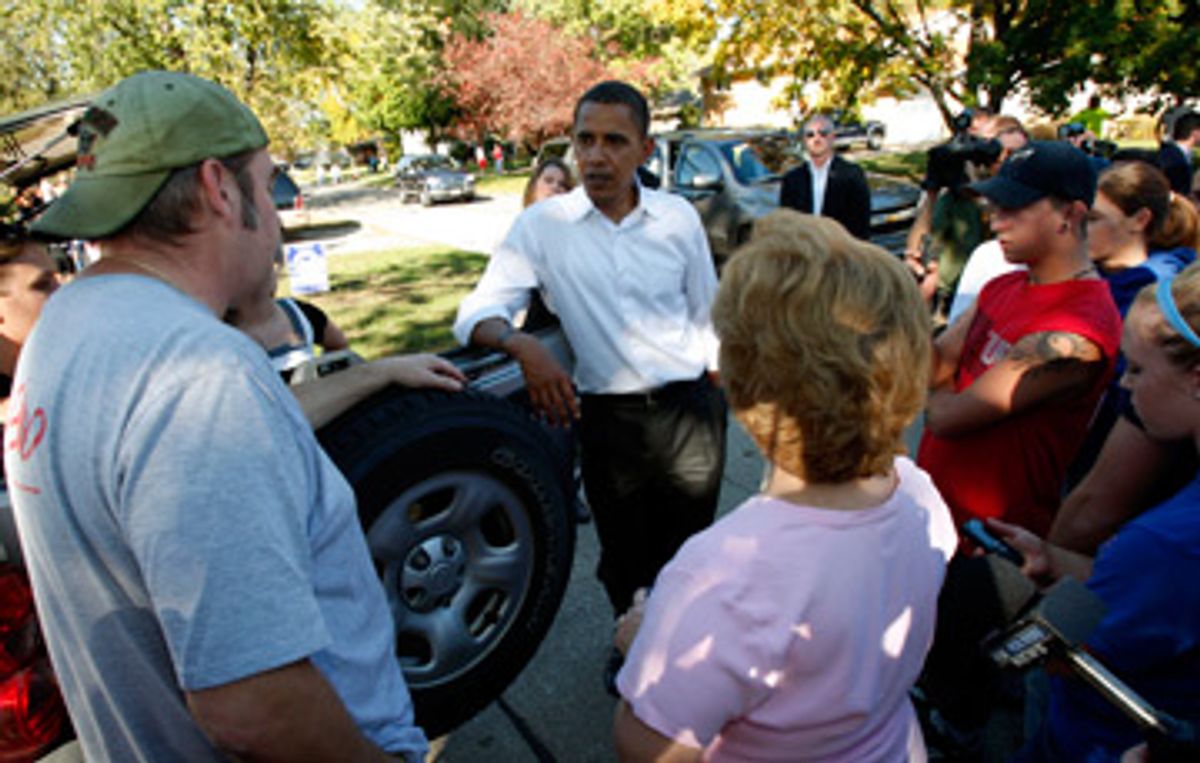 The Saturday afternoon scene seemed ripped out of a Republican playbook. A campaign canvasser wearing a black cowboy hat stood on the threshold of a mobile home in a hardscrabble, virtually all-white rural county talking about God's will and the White House with a retiree who once was a fundamentalist Baptist preacher.

"I think God had it all planned out for Barack-o to be our man," said Tom Morris, 73, a lifelong Republican whose career was mostly as a self-employed truck driver and electrician. Eighty-two-year-old retired coal miner Rufus Fultz, one of the most active Obama volunteers in Perry County, chimed in, "I believe it too." Morris and his wife, Ernestine, who also crossed party lines to vote early for Obama, live in a trailer in their backyard because they lack the money to repair their ramshackle house. Morris confessed, "I pray every night that Barack and his wife will be elected to the White House unanimously."

There is nothing unanimous about politics in Perry County, located about 60 miles southeast of Columbus at the point where Midwestern Ohio gives way to Appalachia. With only 15,000 voters in 2004 (New Lexington, its largest town, has fewer than 5,000 residents), Perry County appears to be a fly speck in a swing state where turnout is expected to exceed 6.5 million.

But Perry County has an uncanny knack for being a political soothsayer. In both the 1988 and 2000 presidential elections -- the prior two contests without an incumbent on the ballot -- Perry came closest among Ohio's 88 counties of mirroring the presidential vote. In 2004, Perry County came within 1 percent of matching the George Bush and John Kerry vote margins. The Political Research Center at Suffolk University, which identified the county as a bellwether for its Ohio polls, found that Obama led John McCain by a 45-to-41-percent margin in Perry County in mid-October, relatively close to the survey's statewide result. "There is a chance that the bellwether model will not work this year because of heavy urban registration in Ohio," said David Paleologos, the polling director at Suffolk University. "But it has worked in the past."

Even though the minority population of Perry County is little more than a few guys who checked the "Hispanic" box on the Census form as a joke, Obama appears to be holding his own in a place where the Ku Klux Klan thrived through the 1920s. Typical of today's  Obama voters is Rick Barnette, a beefy school bus driver with a goatee, who said, "I can't see myself 10 years ago voting for an African-American like Obama. It was how I was brung up. I've seen the Ku Klux Klan pictures." But now Barnette's major objection to Obama is that he did not choose Hillary Clinton as his running mate.

Shortly after noon Saturday, Barnette was sitting in the unused keno room at Fiore's restaurant and bowling alley in New Lexington helping devise schedules for the high-school bowling league. His companion and fellow Obama supporter Mike Shiplett, whose daughter is in the Air Force in Guam, tried to explain the transition in Perry County. "It's generational," said Shiplett, who is a self-employed truck driver and the operator of a cleaning service. "People our age are different from our parents. My daughter dated a black guy and he was a hell of a nice guy. Things are changing."

But not completely. Standing behind the counter of the bowling alley that has been in his family for three generations, Tim Fiore lamented that teenagers and young men still use "the n-word." A few feet away, watching his teenage daughter bowl, a long-haul truck driver (who would not divulge his name) talked about his indecision as he stood at the booth for early voting. "It was awful," he said. "I really couldn't decide." What finally pushed the trucker over the edge for McCain was his thinking about how Barack Obama's name was so different from the roster of prior presidents.

At the Perry County GOP headquarters in New Lexington, Donald Minor, a retired Teamster who is volunteering for the party, said, "Many Democrats, who never voted Republican before, are coming in to say that they're pulling the whole Republican lever." Why is that, I asked Minor, who confessed that he was a registered Democrat himself. "Because they don't trust Obama," he said. "People who come in here are afraid of Sen. Obama. I won't tell you all the names he's called. But socialist is the nicest."

If there is an ideology in Perry County, it is not so much conservative or liberal as it is rooted in a profound mistrust of the nation's political and economic establishment. "They're remarkable people," said Lowell Morrison, the county Republican chairman who runs a printing company, in a telephone interview. "They're the only people I know who vote principle over their pocketbook." Morrison explained that McCain fits their core values while Obama reflects their economic concerns. Then he shrewdly added, "Republicans and Democrats here have more in common with each other than they do with the leadership of their respective parties."

It is simplistic to believe that this tightly knit county would be heavily Democratic if it were not for Obama's race. After all, the last time the Democrats hit the 50 percent mark in Perry County was in 1976 when Jimmy Carter carried Ohio. But the economic crisis has made a heavy impact. Almost everyone here not on a pension seems to be holding two jobs to make ends meet -- and we are not talking about occupational hyphenates like "model-actress." As Dan Dodd, the local Democratic state representative, put it, "We didn't see the boom days of the 1990s. But we're certainly feeling the recession of this decade."

It is easy to concoct theories to explain what appears to be occurring in Perry County. There is the notion that recession trumps race. And also the inchoate feeling that the 2008 presidential campaign has been going for so long that Obama and his African-American background have grown familiar.

Speaking at a rally in Columbus Friday night, McCain declared, "I know my history. I know it's been a long time since someone didn't carry the state of Ohio and become president of the United States. I'm not going to risk it. I'm going to carry the state of Ohio." McCain was right: The last president who failed to win the Buckeye State was John Kennedy in 1960. But if history is any gauge -- and Perry County remains a divining rod for presidential elections -- then McCain is facing a steep uphill climb in this key state.