Black presidents we have known

What does it look like to have an African-American in the White House? Pop culture has offered versions awful and great, from Sammy Davis Jr. to Chris Rock. 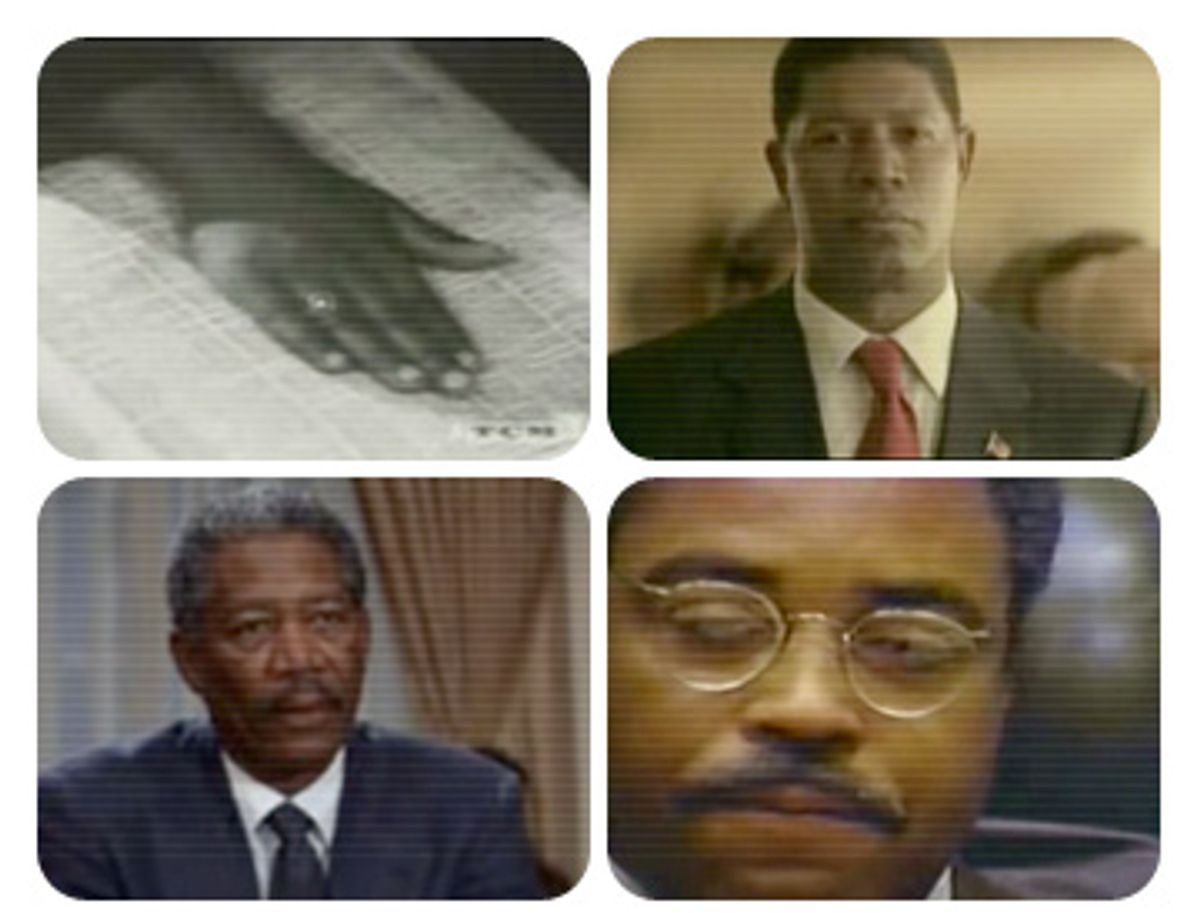 If Barack Obama wins Tuesday, he might begin his victory speech by thanking Dennis Haysbert.

At least Dennis Haysbert seems to think so. Months ago, he declared that his portrayal of a black president on Fox's "24" series had paved the way for the real-life senator from Illinois. "If anything, my portrayal of David Palmer, I think, may have helped open the eyes of the American people. And I mean the American people from across the board -- from the poorest to the richest, every color and creed, every religious base -- to prove the possibility there could be an African-American president, a female president, any type of president that puts the people first."

He may be on to something. As one of "24's" most dedicated and ambivalent fans, I have always marveled that a single program could accommodate both Dick Cheneyesque interrogation techniques and the liberal wet dream that is David Palmer. Unassailable in his goodness, ironclad in his resolve, Palmer is only incidentally a black man, and he is, not so coincidentally, everything you could want or need in a commander in chief. In the checks-and-balances universe of "24," a figure of such virtue cannot live indefinitely, and in the opening episode of Season 5, David Palmer was duly sent to his reward. His legacy lived on, fitfully, in younger brother Wayne (D.B. Woodside), who overcame his wicked-pol origins (and his goatee) to become the Bobby to David's JFK. "24" is hyper-adrenalized pulp, but pulp can be as good a teacher as art -- better, maybe -- and it's hard to deny that six years of the Palmer brothers have inured a whole segment of Fox America to the sight of black faces in the Oval Office. But, in fact, the Palmers are just the latest milepost in a long road of acculturation that has taken several curious detours along the way.

To the audiences of the early 20th century, perhaps the most defining image of black power was provided by "The Birth of a Nation" (1915), which shows the Reconstruction Legislature of South Carolina overrun by barefoot black legislators -- an open reproach to everything white civilization holds dear. Given the prevailing political climate, it's no wonder that the idea of a black president, before it could be broached anywhere else, had to be considered through the prism of fantasy.

In 1926, a Brazilian children's author named Monteiro Lobato had to look far into the future -- the year 2228, to be exact -- to imagine an African-American president. In Lobato's obscure, half-prescient novel, "O Presidente Negro (The Black President)," a politician named Jim Roy, leader of the Black Association party, actually succeeds in claiming America's highest office, only to be undone by a coalition between the incumbent white president and a white feminist named Evelyn Astor. Roy is murdered in short order, leaving his race to be sterilized into extinction by "the Aryan super-civilization." See where ambition gets you?

Fantasy of a different order is on view in "Rufus Jones for President" (1933), a bizarre Vitaphone musical short in which a black mother (the great jazz-blues singer Ethel Waters) dreams that her little boy (an immediately recognizable Sammy Davis Jr.) has been elected president. A modern viewer barely has time to register the aspiration before recoiling at the racial slurs that were common to that day: black voters lured to the polls with free pork chops; Rufus celebrating his victory with a half-eaten piece of chicken; a presidential platform that calls for unlatching chicken coops and planting watermelon vines close to the fence.

From bulging eyes to happy feet, scarcely a single racist trope is omitted from this 23-minute film. But perhaps the most disturbing sight is Davis, whose grown-up clothing and prematurely aged face give him the appearance less of a child than of a midget. It's as though the filmmakers understood that the only way to make a black president pass with Depression-era audiences was to shrink him into freakish insignificance.

Rufus' minstrel trappings have long since faded away, but the freak principle has proven more tenacious. Luc Besson's 1997 sci-fi epic, "The Fifth Element," features professional wrestler Tommy "Tiny" Lister Jr. as a 300-pound space-federation president who conveys his thoughts via grunts and glares. President Dwayne Elizondo Mountain Dew Herbert Camacho (Terry Crews), the free-world leader of Mike Judge's futuristic satire, "Idiocracy" (2006), is yet another professional wrestler, who opens his State of the Union address with the word "Shit!" followed by: "I know shit's bad right now with all that storm and bullshit. And the dust storms. And we runnin' out of French fries and burrito covers." In both movies, the joke is essentially unchanged from the days of Rufus Jones: These are the last guys in the world -- or any world -- you'd want to vote for.

The same might be said of Mays Gilliam, the D.C. alderman of "Head of State" (2003) who is tossed into the presidential race as a sacrificial lamb so that a more deserving candidate can win four years down the road. (The film is a kind of downscaled black version of Michael Ritchie's "The Candidate.") Star-director Chris Rock at least takes the honorable course of showing that Mays' street wisdom and common-man empathy make him at least as deserving of high office as the white stuffed suit he's running against. It's telling, though, that one of the bigger laughs in an undernourished movie comes when Rock is first asked to run for president of the United States. "The United States of what?" he cries.

For a soberer assessment of how Mays' scenario would play out, you have to turn back the clock to 1964, when high-minded pulp writer Irving Wallace published his bestselling novel "The Man." Wallace's hero, Douglass Dilman, begins the story as a cipher and token: A black politician who has chosen not to make waves and whose reward is to be appointed Senate president pro tempore. With the sudden deaths of the president, vice-president and House speaker, laws of succession unexpectedly thrust Dilman into the Oval Office, where he has to choose between obeying the directives of his white advisors or hewing to his own stubborn path.

"The Man" is many things -- overlong, overplotted, deeply in earnest -- but it is most vividly a window into Kennedy-era racial pathologies. Dilman's mulatto mistress could pass for white, and his grown daughter is already passing. His son is embroiled with black radicals, one of whom tries to assassinate Dilman for being a traitor to his race. Dilman himself confesses that he is "afraid of being black," and in a plot move straight out of "Birth of a Nation," his white social secretary accuses him (falsely) of trying to rape her. Even the author, whose liberal sympathies are never in doubt, occasionally falls prey to the era's unthinking racism, as when he pauses to consider Dilman's "thick lips" reciting the presidential oath.

On the basis of trumped-up evidence, Dilman's enemies manage to get him impeached, but he is saved from conviction by the vote of a single white senator, who has belatedly come to appreciate Dilman's integrity. (The trial, ironically enough, is based on the proceedings against Andrew Johnson, who was a prime demolisher of the Reconstruction.) At the end of Wallace's book, Dilman has survived his ordeal, but just barely, and his survival is, in effect, all the honor he can expect.

When Rod Serling adapted "The Man" to the screen in 1972, the political climate had changed sufficiently that he could promote Douglass Dilman from survivor to competitor -- a genuine leader who, after standing up to his white rivals, vows to win the presidency through "legitimate" electoral means. In the final sequence, Dilman strides onto the floor of his party's convention to declare his candidacy, and in our last image of him, he is framed against the American flag with the cheers of his supporters ringing in his ears. His political future is unclear, but his moral victory is certain.

It's a great mystery that "The Man" has never been released either on video or DVD. Quite apart from its timeliness, it's a smart, literate and well-crafted movie --Serling jettisoned most of Irving's narrative excesses -- and James Earl Jones' lead performance is a thing of some beauty: unblustery, charming, even delicate. In effect, Jones has the same impact on skeptical viewers that Dilman has on the American electorate. Your only question at film's end is whether anyone can be president if they don't look and sound like James Earl Jones.

From there, it's a short journey to Morgan Freeman's duly elected president in "Deep Impact" (1998), a commander in chief of such unquestioned authority that he can impose martial law the way other presidents declare commemorative holidays and, without triggering a single riot, can inform the American people that all but a million of them will be demolished by an asteroid seven miles wide. "May the Lord bless you," he tells his flock. "May the Lord keep you. May the Lord lift up his divine countenance upon you and give you peace." It's no surprise that Freeman came in second in a recent Moviefone poll of best movie presidents (behind only Harrison Ford in "Air Force One"). No surprise, either, that Dennis Haysbert should adapt many of the same cadences for his David Palmer.

There is, of course, a trap built into this template of perfection. The unspoken message of "The Man" and "Deep Impact" and "24" is not just that black presidents can be better than the whites around them but that they must be. This quieter strain of racism may be what Dave Chappelle was rebelling against with his "black President Bush," a ghetto caricature so outrageous it becomes an affront both to Bush and to Morgan Freeman.

These cultural models of black presidency -- Chappelle vs. Freeman, iconoclasm vs. iconography -- say a great deal about the tightrope that African-American political candidates have had to walk all these years. But, in fact, these sharply opposed narratives may also spring from the same source: a deep-rooted skepticism that America can ever truly shake off its racism, that American voters can ever look at a black and white candidate in the same way.

Tuesday, America at last has a chance to kick down that fence. And to brave whatever comes. And, in their own strange way, television and the movies have shown us how to make it happen.