A Sunday visit to the megachurch that praised George W. Bush suggests that its political end of days is near. 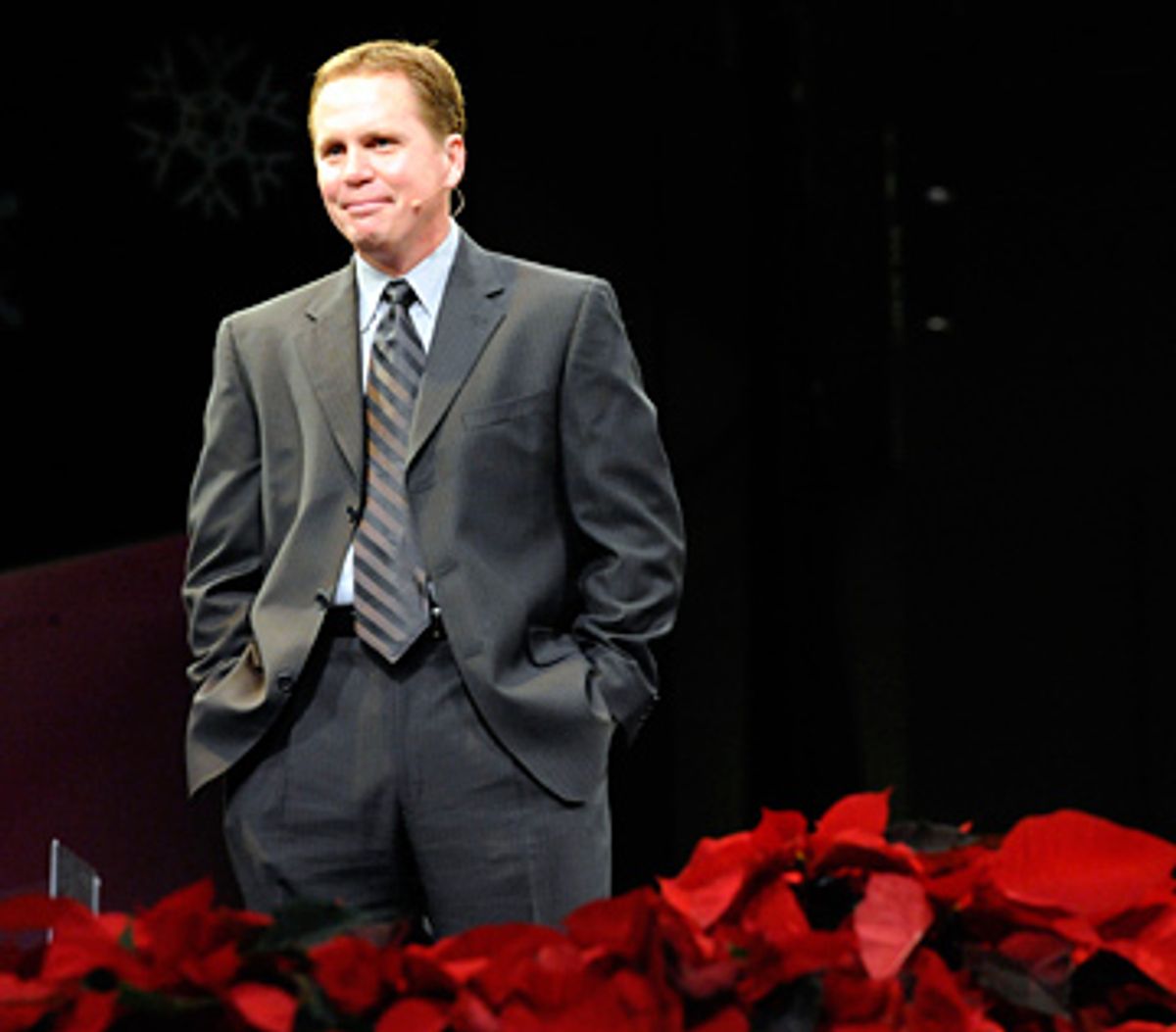 The only real sign that this wasn't just any other Sunday at New Life Church was the pickup truck perched just off church property, on the shoulder of the road between the highway and the parking lot. Enormous pictures of smiling babies covered the truck and the extra-large camper attached to its bed. "Let me live!" the photos implored. The truck -- and a group of demonstrators waving and greeting worshipers as they arrived at the corner -- was part of a get-out-the-vote effort for Colorado's Amendment 48, a ballot initiative that would amend the state Constitution to say that life begins at conception.

The amendment was cooked up by an antiabortion group calling itself "Colorado for Equal Rights." When sponsors pulled together the votes this spring to land Amendment 48 on the ballot, it seemed like it would drive turnout among conservative activists. But it may not be having the desired impact. Already, Democrats have turned in several thousand more early and absentee ballots than Republicans, according to state statistics, even though Republicans hold a slim edge in registered voters. And polling shows the amendment itself may be defeated by a wide margin.

Against that backdrop, politics were muted Sunday at New Life Church. The main theme of the week at the church was "Heaven Defined," a month-long series of sermons that promised to tell worshipers exactly what their relatives were up to in the afterlife, right down to their heavenly recreation. The church's weekly video announcements opened with a mock disclaimer, like the federally mandated ones on campaign ads, from the Rev. Brady Boyd, its senior pastor. "My name is Brady Boyd, and I approve these announcements," the video began, as the pastor smiled down in front of a waving flag. The congregants laughed.

New Life isn't just any megachurch. Its founding pastor, the Rev. Ted Haggard, once led the National Association of Evangelicals. He helped rally his flock -- and conservative Christians around the country -- behind George W. Bush's reelection campaign four years ago. For a time it seemed New Life, the largest church in Colorado, was set to be the vanguard of a political movement that would put the Bible into policymaking for years to come, as Karl Rove and evangelical leaders like Haggard teamed up to turn the country red.

But that was before Haggard was forced out of his post after a scandal involving methamphetamines and a gay hooker, two elements that don't go over that well among fundamentalists, and especially not when mixed together. Two days later, Republicans lost control of Congress in the 2006 elections. Now, two days before another election, with the polls pointing toward a Barack Obama victory both in Colorado and nationwide, the country no longer quite seems to be going New Life's way.

Sitting outside the sanctuary between the morning's services, congregants worried about what might happen Tuesday. "I'm afraid Obama is going to change our country into a Muslim country," said Melody Edwall, 51, a manager for an air carrier who lives in Colorado Springs. "I do. I'm afraid of him." Edwall was pretty sure Obama wanted to change the country too much. "This is America -- you don't like it, leave," she said. She'd heard Obama wanted to change the flag and the symbols of the country somehow. "He wants it to be this one big -- I don't know -- it's not America. It's going to be something else, and I don't know what it's going to be."

At a table nearby in the church's cafe, Dan Kauffman, 55, an engineer from Parker, Colo., told me the election would probably be close. "We've got a lot of people in this country who want to lead their individual lives, they want to be left alone by the government, and they call themselves conservative Republicans," he said. "And we've got a lot of people who want the government to take care of them and be their God, and take care of them cradle to grave; they call themselves liberal Democrats. Right now we got a liberal and a socialist running for president, so who knows what could happen?" (That would be John McCain, the liberal, and Obama, the socialist, if you're scoring at home.) A friend of his, Brenda McDowell, was decked out in a McCain-Palin button and a GOP scarf with elephants on it. She nodded as Kauffman went back and edited his pronouncement, noting that Sarah Palin was the only conservative on the national ticket. "She is totally awesome," McDowell said. "She is us. And she's a Christian."

Palin, unlike her running mate, had managed to get New Life worshipers excited. (She will hold a rally in Colorado Springs on Monday night.) "I'm crazy about Sarah, she's my girl," said Karolyn O'Brien, who was from California, visiting her niece. For that matter, she was also "crazy about" Bush. "I love him," she said. "I think the history of the times dictated his leadership. He could only go by the advice he had from the experts, and I'm sure he did the best he could."

Palin notwithstanding, New Life doesn't seem to be pulling out all the stops for McCain, the way the church did for Bush. Although McCain has been trying to play up his anti-choice abortion positions and his Christian faith, the New Life faithful told me they don't have much in common with McCain's theological outlook. Boyd barely mentioned politics in his brief sermon. (A prayer session about the election was scheduled for later Sunday night, but it was going to double as a water baptism for new members.) "I want to talk to you at least for a couple of minutes here about the election," Boyd said. "It's this Tuesday and I don't know about you, but I am really looking forward to Wednesday. I'm tired of political ads. I've had it -- my bandwidth is maxed out on political ads."

The federal elections weren't the main thing on Boyd's mind. "I'm not going to tell you who to vote for," he said. "You pray, fast and vote for whoever God tells you represents your values. We have a biblical worldview here, so vote for candidates who are going to do that -- who are going to uphold the Biblical worldview we all have." Mostly, Boyd seemed worried about Amendment 48. "If you're not interested in any other issue on the ballot please, please, go to the polls on Tuesday -- if you have not voted yet -- and vote yes for Amendment 48," he said, probably violating the terms of the church's tax-exempt status. "It's the right thing to do."

The same polls that show most Colorado voters will reject Boyd's advice on the abortion amendment also show Obama leading in the state. Independent voters, who make up 26 percent of the ballots cast in early and absentee voting, appear to be breaking heavily for Obama. A Senate race, between Democrat Mark Udall and Republican Bob Schaffer, is considered a virtual lock for Udall.

Although New Life may be about to experience a political shift to candidates many of its members deeply distrust, the church didn't appear to be bracing for an apocalypse. The service started with Jesus-inflected light rock, the musical lingua franca of modern evangelical Christianity. Several thousand worshipers were on their feet with their hands in the air. The main lights were off, and a huge backdrop behind the stage was bathed in a minty green glow. A seven-piece band with four singers played songs like "Counting on God" and "Yahweh," while a choir of more than 100 members sang behind them. (The band, called the Desperation Band, is a staple on the teen Christian rock circuit.)

Sitting a few tables away from Kauffman and McDowell was Jason Kelsey, 36, a firefighter from Colorado Springs. Four years ago, he was rabidly pro-Bush. "I was ready to leave the country if Kerry won," he said. "I was moving to Australia. I just had an unsettled feeling about Kerry, and I didn't want to be around for the fall." He still thinks the president's done a good job. But this time around, it's time for a change; by Sunday morning, Kelsey had already voted -- for Obama. He said he has "faith in the change that he's promising."

There may not have been many other Obama supporters among the thousands of people at New Life on Sunday morning. But if Obama goes on to win the election, the faint echo of politics at Sunday's sermon may signal something louder. Should places like Colorado, and Ohio, and North Carolina and Virginia -- all states with more than their fair share of evangelical Christian conservatives -- go blue on Tuesday, it will be a clear sign that the sun may be setting on the political influence of fundamentalist churches like New Life.