I believe all the polls, and none of them

Will Americans do the impossible and elect a black president? The alternative is monstrous. 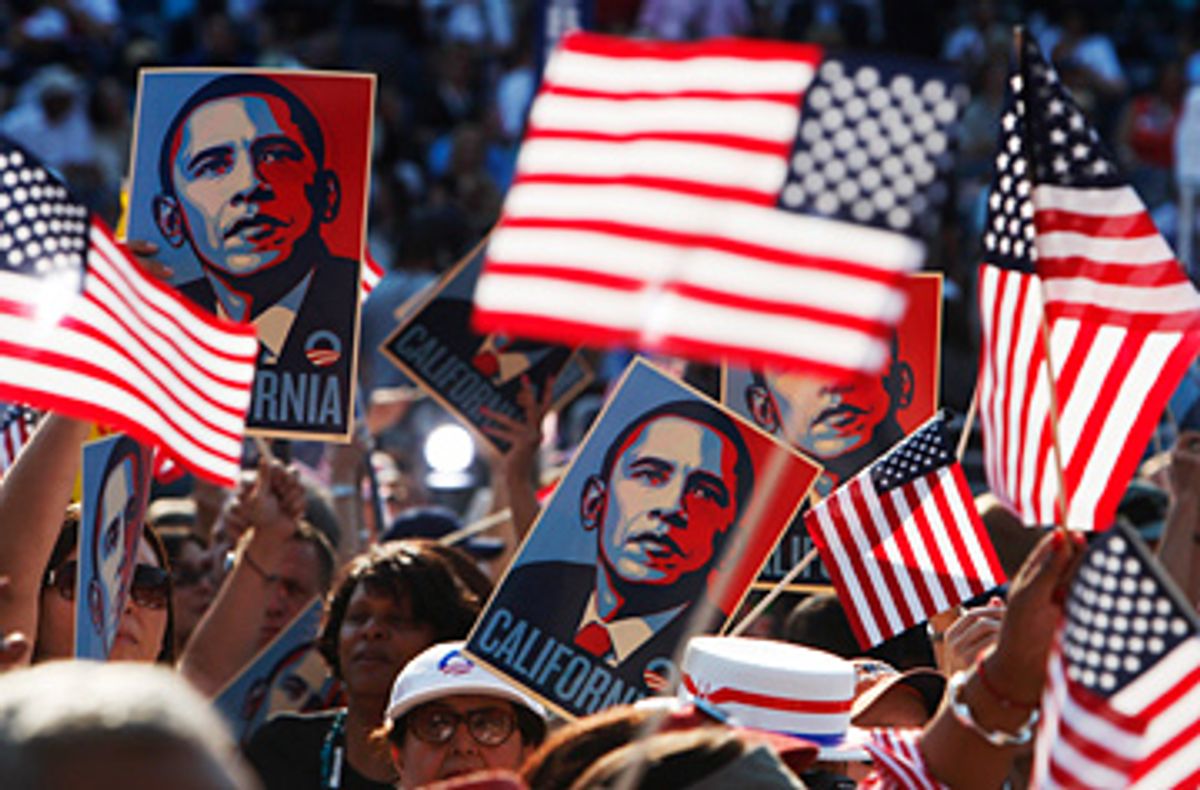 I write four days before the election, in Minnesota, where yard signs are everywhere. Here in the modest Uptown part of Minneapolis, it's almost all Obama; in the wealthier sections you can find McCain signs that loom as large as billboards. At a family dinner one night we toasted misery on the next door neighbors. This is a very patriotic part of the country. People are proud of their convictions.

For weeks, all of the indicators, measurements, polls and calculations have pointed to an Obama victory, even an overwhelming rout. But while I read the polls many times a day and half believe them -- believe them all, the poll that has Obama leading by 15 as much as I believe the poll on the same day that has him leading by 2 -- I also believe absolutely none of it. My whole life, my upbringing, education, travel and talk, from working in Congress as an intern at the height of the civil rights movement in the mid-1960s to every election in which I've ever voted, makes it all but impossible for me to believe that, on Tuesday, a single state will turn its face toward the face of a black man and name him president of the United States.

Throughout the primary season it was trumpeted again and again that regardless of the outcome of the Democratic contest, the nation would see its first major-party ticket headed by either a woman or a citizen whose skin was not white. But it was not remarked on that, in a world where women have led Israel, India, Great Britain and Germany, a female president was not unthinkable, but that an African-American president was. "I never expected to see this in my lifetime," the white, left-wing journalist Larry Bensky, in his 60s, said one day on the radio, bitterly, because while it was a fact, it was not necessarily true: He could not credit it. He might have been thinking that it was all an illusion, a trick the country was playing on itself. Could the election be a vast and horrible 21st century version of the now-forgotten 1950s embarrassment, Take a Negro to Lunch Day, or the nation remade as its own blackface minstrel show, with the whole thing over when the sun goes down?

The more likely an Obama victory seems, the more monstrous the alternative has become. That is partly because McCain has made himself a monster of hate and lies, homing in on the evil that lies as a legacy in the heart of every white American: a guilt that turns into fear, less of a strangely calm, eloquent, dark-skinned man not yet 50, but of even symbolic reckoning for 400 years of racist crime.

But the specter of a McCain presidency, with Sarah Palin waiting in the wings -- a Dominionist, which is to say she believes, and entered politics to ensure, that her God by right has, and by her hand will enjoy, dominion over every aspect of life in the United States -- seems monstrous also because it promises, at best, in merely practical terms, to wreck the country, if not to erase it, leaving the Constitution the dead letter Bush and Cheney have worked to make it, acting, throughout their terms, as if it already were. The country that, as it has for more than 200 years, struggled both to escape and live up to its charter is still recognizable, but there have always been Americans who never recognized that America, and McCain now stands for them.

What sort of president might Barack Obama be ("If," in the thought that crosses so many minds if not so many mouths, "he lives")? The presidency changes people; there is no way of telling. He might be ground down, his gift for speaking of complex things in a complex way that sounds like ordinary talk breaking up into catchphrases and clichés, as on the campaign trail in its last days, Obama like McCain repeating the same lines hour after hour until even he must be nearly choking over the way a truth can feel like a lie. Or he might, with a carriage and a way with words that makes comparisons with John F. Kennedy seem to flatter Kennedy, not him, again plant seeds of possibility that anyone might harvest.

There are also comparisons to Lincoln, and these map the desert Obama as president would have to cross. "Instead of glory, he once said," the historian Richard Hofstadter wrote of Lincoln, "he found only 'ashes and blood.'" For the moment, for the country, perhaps for Obama too, that would be reward enough.