Plenty of white bigots will vote for Barack Obama on Tuesday. There are some things they fear more than black people. 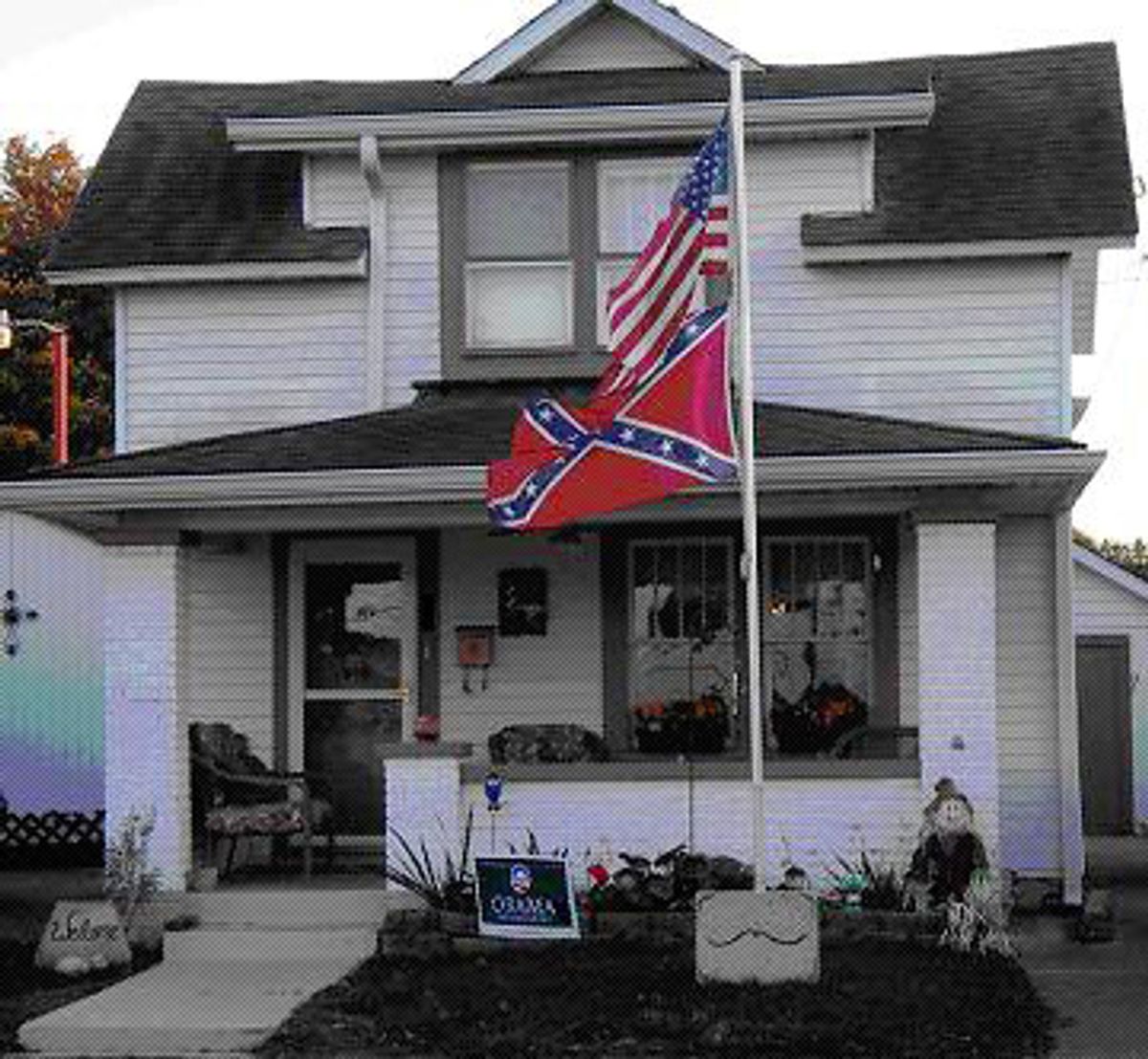 Sean Quinn, of the polling site FiveThirtyEight, respected for its obsessiveness and eerie prescience, recently posted a hair-raising story about a pair of Barack Obama supporters. Quinn seems ready to verify its source, but only after the election. At any rate, it goes like this: A man canvassing for Obama in western Pennsylvania asks a housewife which candidate she intends to vote for. She yells to her husband to find out. From the interior of the house, he calls back, "We're voting for the nigger!" At which point the housewife turns to the canvasser and calmly repeats her husband's declaration.

Ah, racism. It's always a step ahead of us. Even before the majority of Democrats decided that Obama was electable despite being the first openly black presidential candidate, pollsters began gradually raising the level of speculation about the tide of bigotry that might overwhelm white voters once they got into that private little booth and faced the prospect of pulling a lever that suddenly seemed to read "Some Black Dude."

For the past six months, though, countless pollsters have shown that the so-called Bradley effect, named after African-American Democrat Tom Bradley, who lost the California governor's race in 1982 to a white opponent after leading in the polls, has ceased to exist, if it ever really did. Most likely, they say, it won't significantly affect the outcome of Tuesday's election. A recent Gallup Poll suggests that the number of all voters who would reject Obama based on his race, and the number more likely to vote for him because of his race, is about the same. (The numbers for those who would vote for or against McCain because he's white are about the same.) In other words, the Bradley effect is neutralized.

Those polls don't mean that racism still isn't alive in America. It is. But it's not as black and white as all the talk about the Bradley effect might lead us to believe. The couple in western Pennsylvania suggests that people can look past skin color while acting in their own best interests. For whatever reason or reasons -- the economy, healthcare, the Iraq war, Sarah Palin -- some racists are determined to vote for the black guy over the white one. A recent photo published in Politico (here and above) shows a Confederate flag proudly flying over an Obama sign in an Indiana home's front yard. Racists for Obama? It's a bracing contradiction and causes us to look deeper into what Obama's candidacy is telling us about race in American life and culture. People have criticized Obama for his willingness to reach out to America's international enemies, but they've seldom acknowledged that if he's elected, he's also going to have to deal diplomatically with haters in his own country.

The Pennsylvania couple's intended vote also suggests that we base our impression of what it means to be racist on a number of false assumptions. To be biased, you don't have to be a muscular guy with a shaved head and a swastika tattoo, or a late governor of a Southern state. You might be a radio personality, or even a liberal guy with a tendency to jam his foot into his mouth. In August, back before Obama gained his current lead, Jacob Weisberg worried in Slate that 5 percent of white voters telling CBS/New York Times pollsters that they would not personally vote for a black candidate "surely understates the reality," and that if you went by the numbers, racism would be Obama's downfall. It may seem like a logical conclusion, but actually there's no way of knowing whether that self-admitted 5 percent represents something called the "racist vote." Even if 5 percent of white voters claim they won't vote for a generic "black candidate," that's not the same thing as saying they won't vote for a specific individual named Barack Obama. (And the poll doesn't differentiate by party, so we don't know how many of those five-percenters are die-hard Republicans who wouldn't vote for a Democrat of any ethnicity.)

Furthermore, telling some stranger on the phone about how you're going to vote isn't equivalent to casting a vote. Nowadays statisticians have identified a complementary phenomenon to the Bradley effect, the reverse Bradley effect, in which a voter tells a pollster she won't vote for a candidate based on race and then votes for the candidate anyway, probably while feeling very, very naughty. Leaving us exactly nowhere in our quest to pinpoint the degree to which racism might hurt Obama at the polls. It leaves the media in a situation that black Americans are all too familiar with -- struggling in vain to identify and measure racial discrimination as it hides, transforms and eludes our understanding.

The number of racists who aren't voting for Obama isn't as interesting as the number of racists who are. That he has any racist supporters at all points to a quality in bigotry that few people ever acknowledge -- flexibility. It's usually assumed that racism is all-powerful, that it alone will cause someone to vote against a black candidate. But blackness is just one possible plus or minus in a balance sheet with many entries. In an abysmal economy during which the white candidate's campaign has seemed disorganized and erratic, common sense or shared values can prevail over gut fears about the color of a candidate's skin. Dem consultant Paul Begala, quoted by Smith, suggests that the current state of our union might be dire enough to erase the fear of a black president:

If you got to a white neighborhood in the suburbs and ask them, "How would you feel about a large black man kicking your door in," they would say, "That doesn't sound good to me... But if you say, "Your house is on fire, and the firefighter happens to be black," it's a different situation.

Perhaps urgent circumstances require so much self-interest that racism can wait, at least until the crisis is over. Maybe this is why Obama's poll numbers seemed to rise along with the volatility of the world's financial markets.

Though our biases may be the result of some hard-wiring, we can choose not to express them, or not to let them get the best of us. Maybe that's why when people do cling to their prejudices, they have a hard time defending them. The cause may have a scientific explanation, but the justifications we give to racism are largely irrational. Human behavior being so unpredictable, there are plenty of people -- not just whites, but people of all races and political persuasions -- who don't consider themselves racist but who would grab their belongings and hurry across the street if they saw me -- 6 feet 2 inches tall, 210, dreadlocks -- coming down a dark street toward them. They wouldn't even care if I had a copy of the Harvard Law Review in my hand.

And speaking of irrationality, there's apparently more than one reason for a racist to vote for Barack Obama. As Earl Ofari Hutchinson notes in the Huffington Post, some racists want Obama to win because they assume his presidency will give credence to their belief that blacks want to give whites a taste of their own medicine. When Caucasian Americans wake up to this idea, the theory goes, their outrage will spark the racial holy war that white supremacists so desperately await. Their theory does not, however, explain Joe Biden's presence on the ticket.

Let me go out on a limb and say that a full-fledged race war is, um, perhaps the least likely product of an Obama win. It seems more probable, as the western Pennsylvania Obama supporters and the Gallup Poll suggest, that after all our attempts to examine and predict its possible effects, racism won't have any discernible effect in next week's election. That won't be because racism no longer exists in the United States. Instead, racism will remain an elusive, unquantifiable force, one whose influence we can't tease out from among the many other conflicting factors that will determine how Americans vote. And if Obama carries some of those regions deep in John Murtha country, it will happen because, prejudiced as some Americans can be, they know when to put their prejudices aside.