Ohio, Indiana, Virginia and beyond ...

As Americans flock to the polls, all eyes are on a handful of key battleground states. 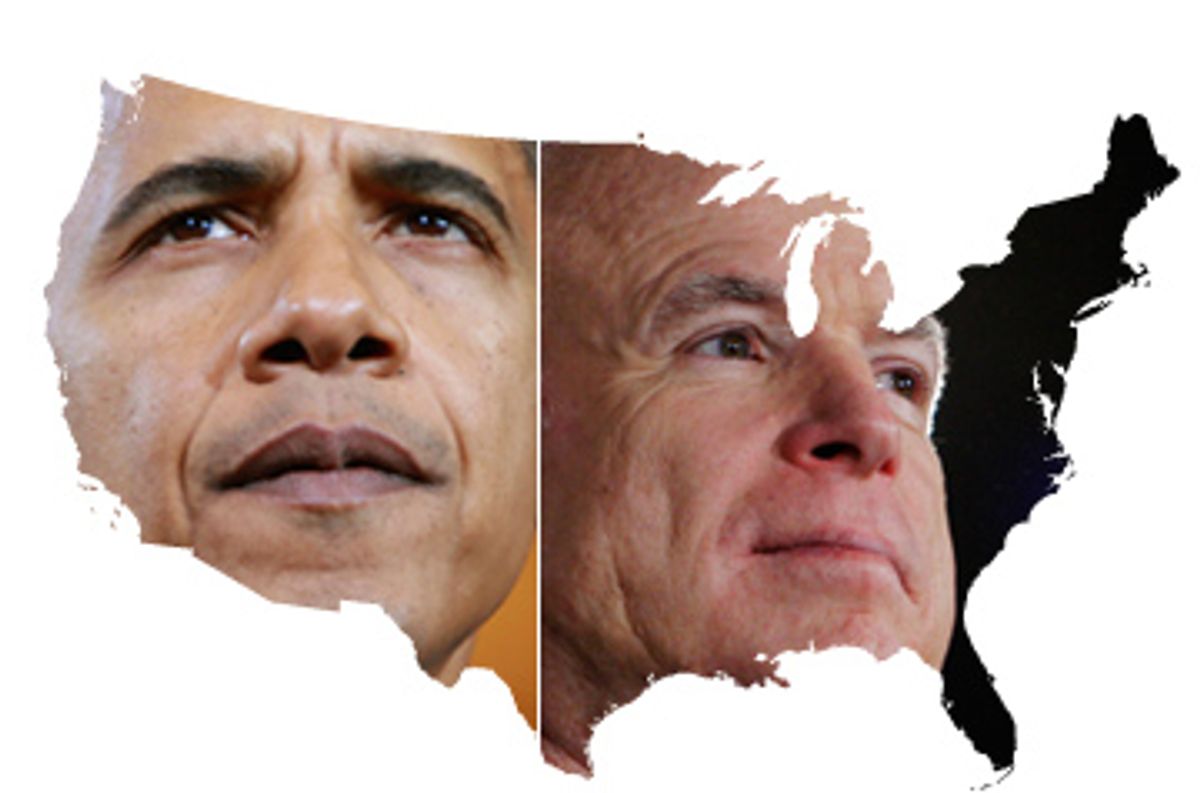 There are secret weapons in every campaign for Election Day, but rarely do they include bulbous red noses or tossing plates in the air. Doug Kelly, the executive director of the Ohio Democratic Party, proudly explained his three-ring-circus strategy: "We have hired every juggler, clown, balloon entertainer and high-school marching band in the state of Ohio to keep people waiting in line to vote."

No one is suggesting that the battle for Ohio's 20 electoral votes will be decided by greasepaint smiles and off-key renditions of "Stars and Stripes Forever." But in a campaign year when parsing the polls has become a national obsession, the impossible to quantify X-factor is the potency of Barack Obama's ground game for getting out the vote. "There are no phone calls in Ohio today by the Obama campaign," said David Wilhelm, a former Democratic National Committee chairman who lives in suburban Columbus. "Everything is door-to-door. I think the impact is different from this kind of personal validation, neighbor-to-neighbor. It's a big deal, especially in rural southeastern Ohio."

The McCain campaign in Ohio is much more heavily reliant on phone banking, as was the 2004 Bush campaign that eked out a keep-the-White House 120,000-vote victory here. As Kevin Dewine, the deputy chairman of the state Republican Party, put it, "Our ground game is not loud. It's not flashy. We don't brag. But we get it done."

Neighboring Indiana, with 11 electoral votes, is this year's most unlikely presidential battleground state -- the Democrats have carried it exactly once since the 1930s. (The 1964 Lyndon Johnson landslide.) But the Obama campaign has been sending organizers into counties where, based on prior elections, Esperanto speakers outnumber Democrats. Brian Howey, the nonpartisan editor of Indiana's leading political journal, predicted, "With all the polls showing the race here as too close to call, I'm going to say that Obama will pull it out, because he has a ground game and an intensity that Indiana has never seen."

Ohio and Indiana -- along with Virginia (13 electoral votes) and North Carolina (15) -- are the early-bird, carried-by-Bush states that will determine whether political mavens will show up at work Wednesday morning bleary-eyed from fatigue (as in 2000 and 2004) or surprisingly well-rested. The polls close early (by 7:30 Eastern) in all four states. If one or certainly two of these states flip to Obama, John McCain's next political worry will be his 2010 Senate reelection campaign.

Unless the reliability of the entire polling profession has gone the way of subprime mortgages, McCain is already facing his two-out, two-strikes, last-of-the-ninth moment. Three 2004 Bush states with a total of 21 electoral votes (Iowa, Colorado and New Mexico) are conceded to Obama by virtually all political analysts, though McCain or Palin made last-ditch appearances in all three on Monday. If, say, Ohio also turns blue, there is virtually no road map for McCain to get to 270 electoral votes, even if he somehow snags Pennsylvania (21 electoral votes), the 2004 John Kerry state that McCain is passionately contesting.

It is easy to get bogged down in statistical saturation on the eve of a presidential election. But there is also a rationale for interviewing voters and conducting semi-candid, late-night barroom conversations with political operatives in both parties. After four days of reporting in Ohio, I have found scant evidence that contradicts the statewide polls, which hand the lead to Obama in 18 of the 20 most recent surveys.

At Fiore's bowling alley Saturday afternoon in the tiny Appalachian town of New Lexington, I heard enough derogatory references to McCain's age to fuel a "Saturday Night Live" skit, with even a supporter of the 72-year-old senator calling him a "great, great grandfather." Dewine's most likely scenario for Ohio projects a close race that will end up entangled in the courts. "I think that John McCain will win the state late Tuesday night or early Wednesday morning," he said. "And then we will all wake up Wednesday morning to discover that [Democratic] Secretary of State Jennifer Brunner has figured out a way to take it away from us."

Indiana -- where the polls close at 6 p.m. but part of the state is on Central time -- will probably be the first barometer state to report detailed returns. Television will breathlessly report the statewide numbers and the vague generalities from the exit polls ("Of those in Indiana who said the economy was the biggest issue... "). But what I will be scanning the Web for are returns from emblematic Indiana counties: Howard County (Kokomo) is a blue-collar Republican area -- Bush received 64 percent of the vote here in 2004 -- with both imperiled General Motors and Chrysler auto plants. If Obama cannot make major inroads there in the wake of the looming GM-Chrysler merger, it would suggest that the economic issue may have less than expected potency in the Midwest.

One of the most intriguing political trends in this decade is the growing blue Democratic tint in the suburbs. The reason Obama is favored in Virginia is because the Washington suburbs represent the fastest-growing part of the state. (A Republican pollster who has advised many campaigns in the state says, "I don't see how McCain can win without Virginia.") In similar fashion, McCain's challenge in pulling off a blue-collar upset in Pennsylvania is the political transformation of the Philadelphia suburbs, which have trended Democratic in recent elections partly because affluent voters do not relate to the religiously based social conservatism of the 21st century GOP. The McCain formula for victory in Pennsylvania (where the polls close at 8 p.m.) depends on miraculously holding Obama to a 400,000-vote margin in Philadelphia and coming out of the suburbs fewer than 100,000 votes behind. What that means is that Obama would have to run behind Kerry's totals (ha!) in both the city and its suburbs.

Upscale Midwestern suburbs have, for the most part, clung to their Republican roots. That is why I will be closely scrutinizing the Indiana returns from Hamilton County, just north of Indianapolis, where Obama has made a major organizing effort, despite Bush's carrying the county by a 3-to-1 margin in 2004. An analogous barometer in Ohio is affluent Delaware County (suburban Columbus), where Bush romped home 2-to-1. If counties like these become competitive as the returns come in Tuesday night, it suggests that the GOP will have lost more electoral traction in the Midwest.

Speaking to a throng of 60,000 Democrats swarming over the grounds of the Ohio statehouse Sunday afternoon, Michelle Obama said with the fatigue evident in her words, "Two more days. I can't believe it. I don't know what else to tell you." In truth, there is nothing more for the candidates, their spouses, their 30-second TV spots -- let alone the pundits and the pollsters -- to say. Tuesday -- finally, after a two-year campaign -- belongs to the voters.