The end of the satirical industrial complex?

For the past eight years, Jon Stewart, Tina Fey and other comedians have had us laughing through our tears. If Obama wins, will the laughter die? 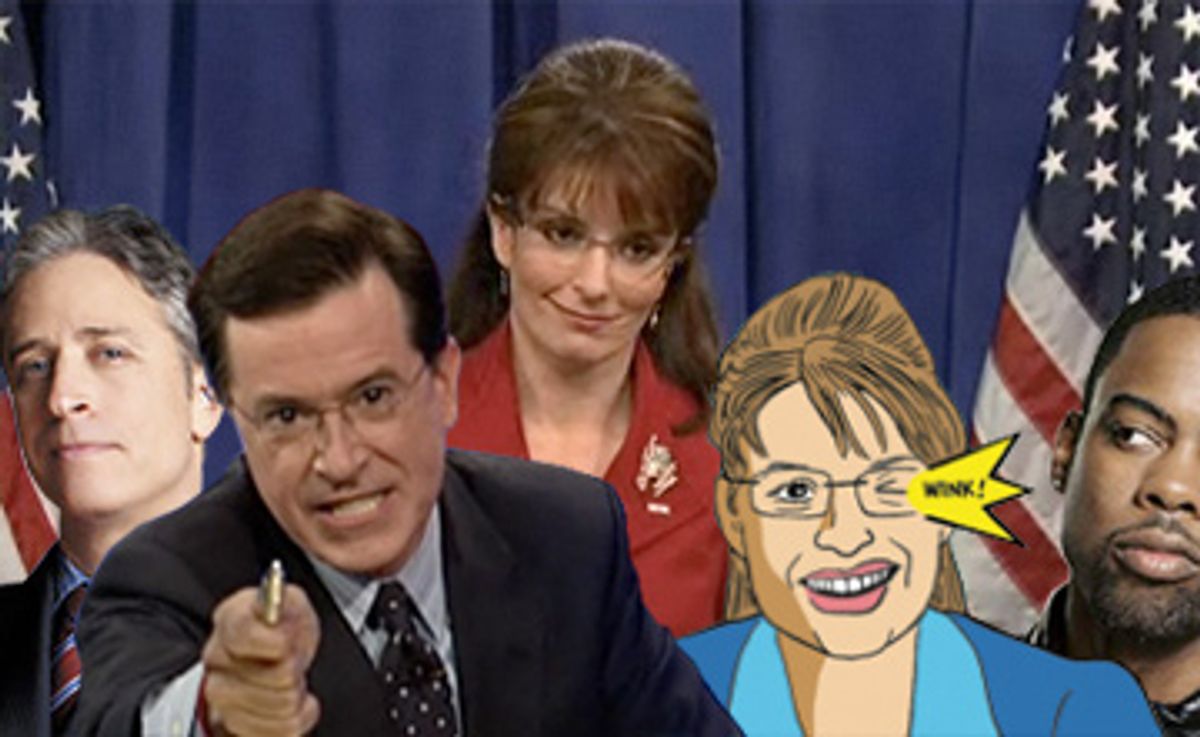 In the past month, millions tuned in to "Saturday Night Live" just to see Tina Fey do her spot-on imitation of Sarah Palin. Fey's hilarious sendups of the vice-presidential candidate quickly became the stuff of water cooler legend, and Palin's own appearance on the show brought "SNL" its largest audience in 14 years.

Our perverse Palin-mania revealed a deeply felt need for a humorous escape from a broken government and financial system that the two presidential nominees pledged to fix. Because the present reality is this: Now is a very unfunny time for America. U.S. troops are fighting two very different wars in two very different countries, and neither campaign is succeeding as promised. Many Americans are uninsured, left to battle catastrophic illness on their own. Oh, and the American economy is in the crapper.

Given their angst and frustration, it is no surprise that liberals have been enjoying the loudest (and last?) laughs during our current, pioneering age of dark, ironic humor. The chuckles produced during the George W. Bush era by a veritable legion of satirists and comedians, ranging from Fey to Jon Stewart to Chris Rock, have been particularly therapeutic. Unfunny times demand the tonic of humorous distraction.

As proved by the nervous giggle that slips the lips when we are anxious, the human inclination to laugh is not consciously controlled. "We don't decide to laugh -- it just happens," says Robert Provine, a neuroscientist and psychology professor at the University of Maryland, Baltimore County, and author of the acclaimed book "Laughter: A Scientific Investigation." "Therefore it's an 'honest signal,' hard to fake, and a reflection of what we really think." (Don't tell Fey collaborator Amy Poehler that; she killed by mocking Hillary Clinton's contrived laughter.)

Bush's rise to power this decade contributed significantly, if not primarily, to the emergence of what Stewart has called the "satirical industrial complex." The complex's roster includes Stewart and his late-night Comedy Central cohort Stephen Colbert; the "Saturday Night Live" troupe, which has experienced its own surge during the 2008 presidential race; and sundry other parodists and comedic agitators ranging from low-key Tom Tomorrow cartoonist Dan Perkins to Chris Rock, who recently quipped that President Bush has "fucked everything up so much, he's even made it hard for a white man to become president."

Unlike comedians from bygone eras, today's legion of lampooners faces fewer constraints in either the appropriate cultural standards or the mediums available for their use. Will Ferrell doesn't need to wait for his next movie to come out to make an impact; he can launch any number of humor attacks on his Web site, Funny or Die. YouTube, the DVR, e-mail and text messaging magnify and accelerate the viral influence of comedic content. The greatest testament to the reach of Fey's Palin impersonations may be the complaint Barack Obama voiced to Washington television reporter Derek McGinty: "I've got to say, compared to Tina Fey, and what she's doing with Governor Palin, my imitator" -- "SNL's" Fred Armisen, who is white and does Obama in blackface -- "isn't doing as great a job."

Much of today's political humor requires a smart and savvy audience that keeps up with current events -- if only in order to mock it. "I just don't think people would find our show funny if they were getting their news from us," says Samantha Bee, "Daily Show" correspondent. "They would have to be getting the news from somewhere to get the jokes. I mean, I don't think you would understand or enjoy the show at all if you didn't know a little bit about what was going on in the world. I think you would find it terribly confusing, and would be watching it with no sense of irony, and then you would be lost and change the channel."

But has any of this smart political humor had an impact on the candidates, the election or our politics? It may be safe to argue that comedy changes the national mood, but can it change the national political climate in more fundamental ways?

"Plato and Aristotle feared humor's power to undermine authority," says Provine, who distinguishes between "laughing with" and "laughing at" types of humor. "'Laughing with' is bonding, and what we do with friends and like-minded folks. 'Laughing at' is directed to others, as in ridicule and jeering. Recently, Palin has been tapping the 'laughing at' mode toward [Barack] Obama." Provine says 'laugh with' humor tends to be more effective, however. "Tina Fey may have a very real effect on the election outcome, and to a lesser extent, so will David Letterman, because their more gentle and devastating variety is more effective than the heavy-handed Palin sort. It may sway the uncommitted and influence the faithful."

Comedian Will Durst, who appears regularly on Air America, CNN and National Public Radio, is less convinced of the satirical industrial complex's electoral impact. "I think we're good at satirizing all politicians. We always have been," Durst told me by phone from California. "But I'm not sure how widespread our effect is. Everybody talks about how powerful 'The Daily Show' is, but it's narrowcasting. I don't know how many undecideds go there."

Unfortunately, the Sampson-like potency of the satirical industrial complex may be headed for a long-overdue haircut when the Bush presidency comes to its merciful end -- especially if an Obama administration is ushered in to replace it.

"SNL" writer James Downey, for one, predicts that Obama will be "a lot tougher" to satirize than other presidents and presidential candidates his show has been skewering for the past three decades. "The media is kind of madly in love with Obama," Downey told a New Yorker Festival audience. "He is also such a smooth character that he doesn't give you many handles." (No such rule applied to Hillary Clinton, he noted. "Bill Clinton got a free pass, but we took it out on her.")

"Obama would be tougher in the beginning for me because I'm a white guy," agrees Durst, who added that the lone upside of a John McCain victory next month is that Palin would be like "methadone" for comedians who otherwise would have to go cold turkey when Bush is gone. "In front of white liberal audiences -- which is what most comedy clubs are, even in red states, it's always that blue-state element -- if I try doing race jokes about Obama you can hear the sphincters tighten up faster than lug nuts on a '57 Ford. Until I can say 'President Homey' and get away with it, it's going to be a little tougher."

An Obama era almost certainly promises to be less funny -- at least in terms of satire. So enjoy Tina Fey's Palin parodies while they last.