Movies to avoid exit polls by

Need some cinematic therapy while waiting for election night? Here are 10 thrillers intense enough to break your 538.com addiction and get you through the long afternoon. 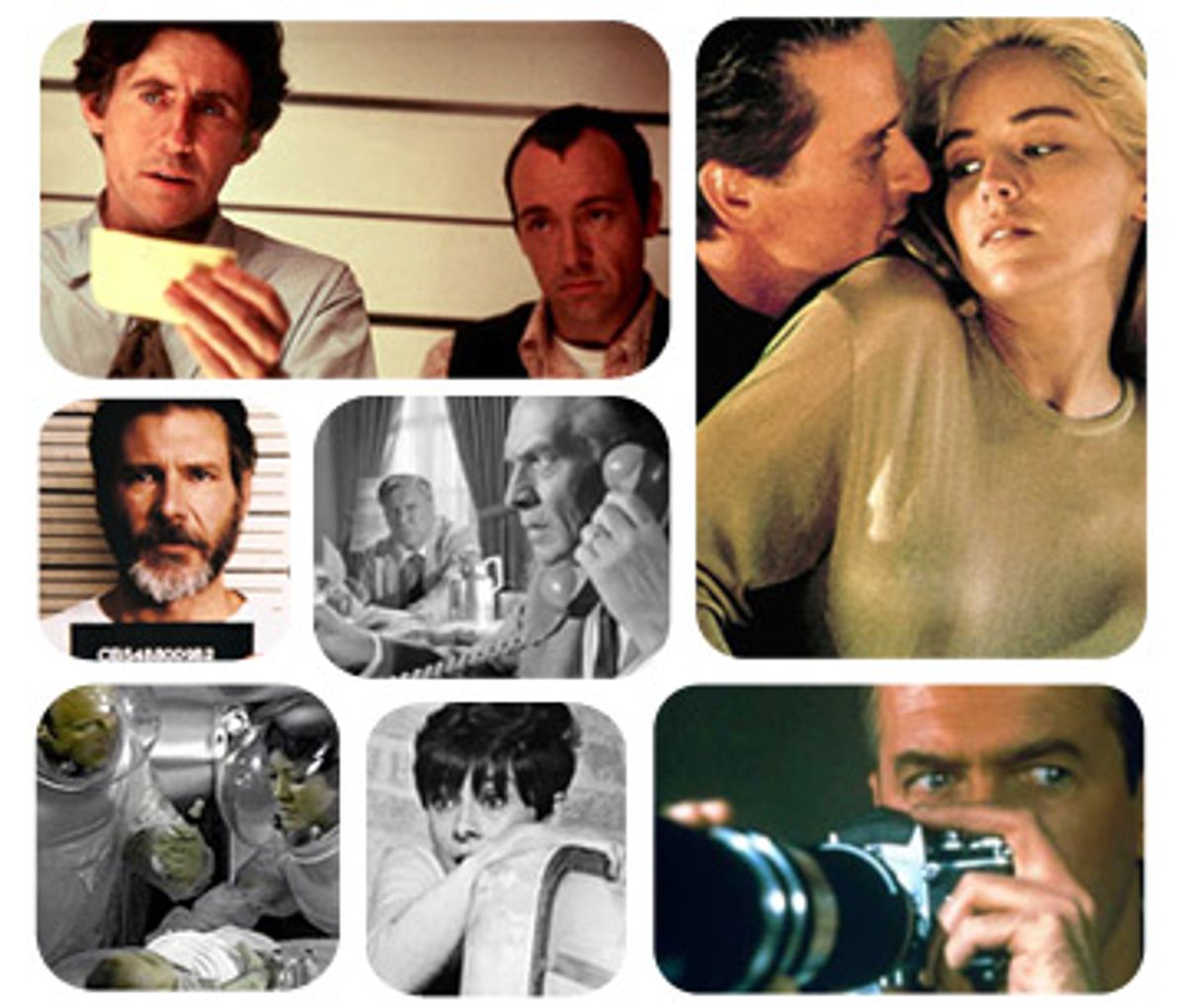 Clockwise from top left: "Rear Window," "Basic Instinct," "Seven Days in May," "The Fugitive," "The Usual Suspects," "Wait Until Dark," and "The Andromeda Strain."

Listen: You think I don't understand. But I do. You've hit bottom, haven't you? You're powerless to control your addiction. Take a deep breath and say it. It's OK. Well, it's actually not all that OK. But I'm here to help.

At first it seemed innocent and fun. It always does. An election, you said. I'm interested in politics, you said. I have opinions! Somebody I like might actually win this time! Maybe I'll find some really cool election sites on the Internet.

And now look at you. Join me in a mirthless, hollow laugh at your own predicament, hunched in uncomfortable positions over 538.com or RealClearPolitics or electoral-vote.com, sweating out simulated elections at 2:30 in the morning. You get itchy and irate when you talk about Zogby's random fluctuations, don't you? Outlier polls showing a closer-than-expected result in Minnesota render you sleepless, don't they? Does the Morning Call poll in Pennsylvania have a Democratic or Republican lean, this cycle? No, stop. I don't actually want to know.

Not very pretty, is it? Remember when you used to laugh at people who obsessed about Magic: The Gathering, or whose social life revolved around the NFL fantasy draft? Well, ha freakin' ha. At least those guys have got a social life. But here's the real problem. You're well and truly hooked, and it's brave of you to admit it. And now you've got to go cold, cold turkey.

Your power to influence the outcome of the election through Talmudic study of Betfair transactions and early-voting trends in Nevada and other magical talismans was always -- how shall I put this? -- limited. (For one thing, you are laboring under the delusion that the United States is actually a functioning representative democracy. But forget I said that. Let's focus, for now, on problems we may be able to manage.) But now the big day is here.

You've voted, for all the good it's likely to do you, and so has everybody else who can actually be bothered. There's no more polling data to read. I know how painful it is to hear that, but it's a good and true and real thing. And I am here to stop you from reading exit-poll data. No, really, stop. Not only is relying on exit polling a little like getting down on the carpet at 5 A.M. and snorting up bits of fiber and cat dandruff and your roommate's toenails on the theory that they might, you never know, contain lost micrograms of illegal drugs -- not only that, but you know what happened last time. It still hurts, doesn't it? You don't want to go through that again.

I'm here to get you through today, and today only. We'll worry about tomorrow, tomorrow. (You can tell I've been to some of these meetings in real life, can't you?) You need diversion, mon ami. You need some powerful cinematic methadone to get you through the next several hours. We're not talking quality cinema here, at least not necessarily. We're talking some truly suspenseful shit, a movie-drug high strong enough to keep you off the Internet and disassociated from the outside world for a few hours, until the so-called real results come in. It ought to be a mercifully early night (that's a prediction) and then, after we all get some sleep, we can start talking about the hard work of recovery.

What's that you say? My bad attitude is nothing but a self-protective mask? Jeez. Whoa. OK.

1. "The Andromeda Strain" (1971) Like all such evaluations, this one's personal -- I saw this as a small boy (and read the book) and was mortally terrified. Still, I think the Robert Wise-Nelson Gidding tick-tock based on Michael Crichton's bestseller remains one of the classic world's-end suspensers ever made. Scientists trapped in a super-secure underground facility must stop an outer-space pandemic before it escapes from the Southwest and kills off the human population of planet Earth. Remade for TV this year, but in the words of my homey Hammer, can't touch this.

2. "The Wages of Fear" Actually, Henri-Georges Clouzot's quasi-existentialist masterpiece about four deadbeats transporting deadly loads of explosive through remote South America, where every pothole could mean death, is one of the greatest thrillers ever made. (I guess it speaks to my arthouse tendencies that Clouzot gets two entries on this list.) I've got it on here because it's absolutely harrowing, and you'll have difficulty breathing for the last hour and a half. William Friedkin's 1977 remake, "Sorcerer," is also good, if unnecessary.

3. "Seven Days in May" A hokeball lump of post-JFK paranoia, but, whoo -- quite an effective one. Fredric March plays the librul president seeking an arms-control deal with the Russkies, and Burt Lancaster is the charismatic right-wing general who schemes to replace him with a more, you know, pro-American regime. Stagey as it is, SDIM cannot be treated as purely outrageous fiction, given the still-controversial Business Plot against Franklin D. Roosevelt, and the proto-fascist activities of the late Gen. Edwin Walker (on whom Lancaster's character was based). Wait, I'm recommending this movie to people who are nervously awaiting the election of our first black president? Um, let's move on.

4. "The Fugitive" A little affirmative action for recent Hollywood, in a faint Obama-esque effort to shed my bicoastal-socialistic, elitist-snob reputation. Best performances of Harrison Ford's and Tommy Lee Jones' careers, in the same movie, and what a crackerjack chase thriller it is. While we're here, co-writer David Twohy is also the writer and director of the pulse-pounding, Vin Diesel-starring sci-fi thriller "Pitch Black," which could easily have squeezed onto this list.

5. "Wait Until Dark" Does the presence of Audrey Hepburn and a certain pseudo-sophisticated, mid-'60s gloss somehow overcome the fact that this film is manipulative, sadistic trash? Hell, I dunno. We report, you decide. Audrey is the blind woman whose Greenwich Village apartment is invaded by three low-lifes (their leader is Alan Arkin) in search of a heroin-stuffed dolly. It's a gut-twister with a dilly of an ending. And did you catch Quentin Tarantino a few years ago on Broadway, playing the Arkin role? No? Believe me, that's OK.

6. "Rear Window" Hell, we could come up with an entire list of Hitchcock suspensers to get you through the day: "Shadow of a Doubt," "North by Northwest," "Rebecca," "Frenzy," just for starters. Furthermore, I could bore you for a while with my dissertation about the profound cynicism about men and women and art and life reflected in this film and "Vertigo," probably Hitch's two best. But let's not bother. If you want one of Hitchcock's brilliant, cold-ass technical accomplishments to absorb your consciousness for a couple of clicks on the cosmic clock, this one's my choice.

7. "Duel" I'm aware that it's obnoxious to proclaim this 1971 made-for-TV flick -- about a driver pursued, for no clear or obvious reason, by the faceless driver of an 18-wheeler -- as Steven Spielberg's best film. But there you are. I can't help it. OK, I'll bite: "A.I." is actually Spielberg's best film. But this minimalist, monomaniacal highway-chase flick, mercilessly depicting the reductio ad absurdum of American life in 90 bladder-crunching minutes, comes a damn close second.

8. "Diabolique" ("Les Diaboliques," 1955) Hitchcock hoped to make this movie about a man's jointly disgruntled wife and mistress who conspire to murder him -- only to have his body disappear from the scummy swimming pool where they've dumped it. But even the Master of Suspense couldn't have outdone Clouzot's atmosphere of black-and-white dread and crypto-sexual (not to say crypto-homosexual) repression, and none of Hitchcock's ice-blonds could have matched Simone Signoret's haunting performance. Commonly cited as the greatest suspense thriller of all time, and although that critical consensus may reflect the teensiest bit of Europhile prejudice, I won't disagree.

9. "Basic Instinct" And if that one didn't convince you that politics and all other forms of human endeavor are pointless, this one might. Beneath the glossy, pulpy, pseudo-Hitchcockian surface of Paul Verhoeven's twisted 1992 San Francisco thriller lies a profound sexual terror, a belief that all Eros is Thanatos and that everything men do to women and vice versa is a form of violence. In English: This is one scary fuckin' movie. A pro-lesbian, anti-Verhoeven protest group in S.F. gave themselves the monicker Catherine Did It, in the belief that they were spoiling the movie's ending. They weren't. Brilliant, trashy, still appreciated more as a phenomenon than a film.

10. "The Usual Suspects" This 1996 puzzler has an inflated reputation and an overexcitable fan base, but damned if the narrative switchbacks and great cast -- Kevin Spacey, of course, but also Gabriel Byrne, Benicio del Toro, Kevin Pollak, Chazz Palminteri, Pete Postlethwaite, Giancarlo Esposito and so on -- won't keep you hooked right through to the final twist. What's that? McCain is conceding on another channel? That's great, that's great. But how did all those guys end up dead in San Pedro? And who the hell is Keyser Söze?

2008 Elections Beyond The Multiplex Movies Thrillers