The journey ends for John McCain 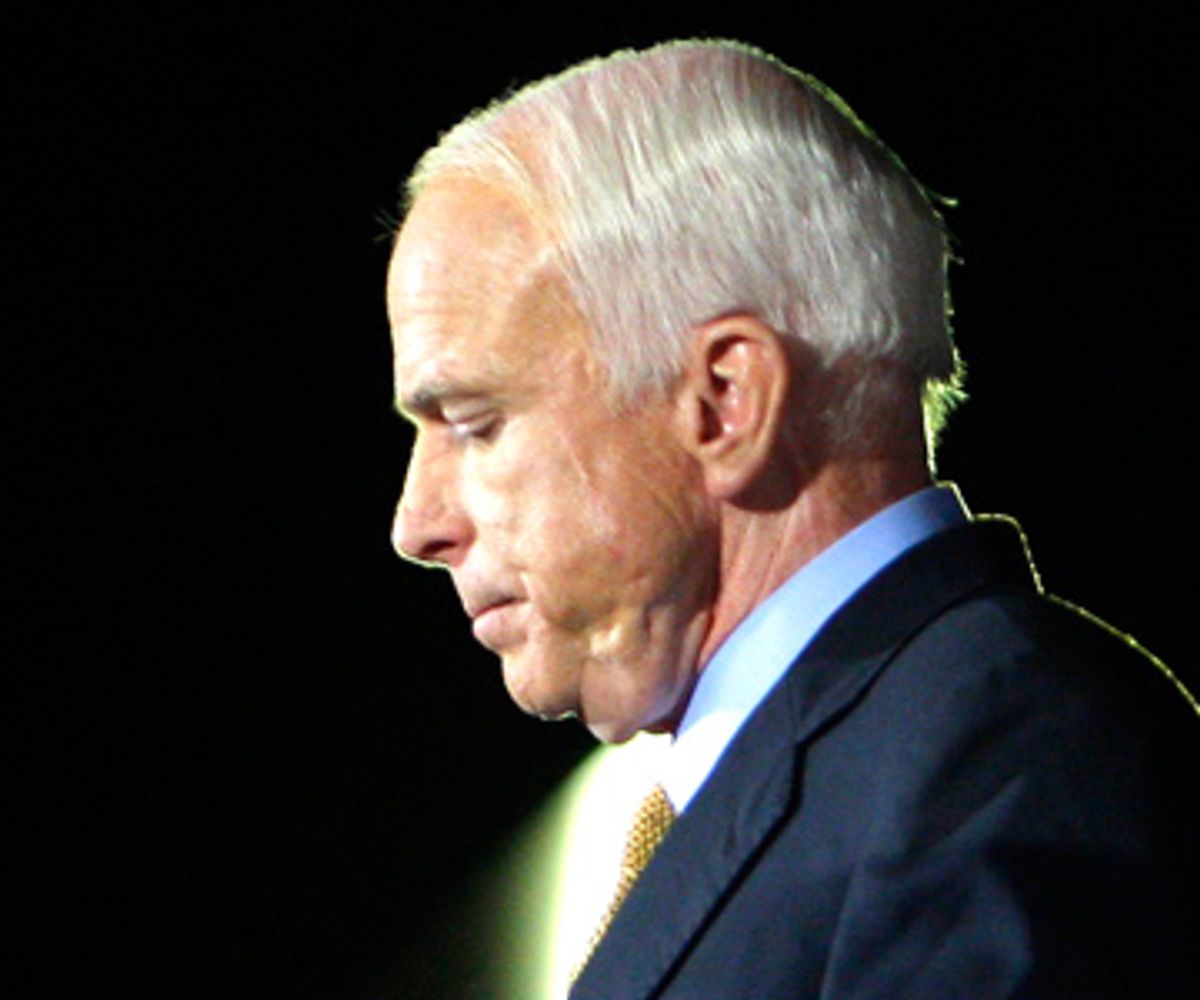 At the exact moment the networks declared Barack Obama had won the election, the DJ at John McCain's muted "victory" party cued up a track that's more or less required listening at all Republican political rallies: "God Bless the U.S.A." by Lee Greenwood.

That might have seemed ironic. Except that by the time the rest of the country learned Obama would be the next president, the people gathered on the lawn at the Arizona Biltmore Resort to hear from McCain had only the vaguest idea that it was all over. There were no TVs outside; a few McCain supporters wandered over to the press pen to ask reporters for the latest electoral vote count.

The 2008 presidential campaign just sort of fizzled out for McCain, and his supporters. In fact, the gathering had an anticlimactic feel from the start. Staffers had an elaborate fireworks and laser light show ready to go in case he won, but resignation, not optimism and excitement, hung in the air as the afternoon wore into the night. (When you lose the state your campaign had claimed would be its ace in the hole -- Pennsylvania -- by 12 points, getting your side fired up must be tough.) In defeat, McCain was gracious, showing the self-deprecating and honorable man whom his campaign threatened to suffocate this year.

"My friends, we have come to the end of a long journey. The American people have spoken, and they have spoken clearly," McCain said. "I urge all Americans who supported me to join me in not just congratulating [Obama], but offering our next president our good will and earnest effort to find ways to come together to find the necessary compromises to bridge our differences and help restore our prosperity, defend our security in a dangerous world, and leave our children and grandchildren a stronger, better country than we inherited. Whatever our differences, we are fellow Americans. And please believe me when I say no association has ever meant more to me than that."

Yes, some people in the crowd seemed determined to prove that Republicans can't gather in large numbers without embarrassing themselves, at least not in 2008. McCain's remark that he had called Obama to concede drew boos, as did a mention of Joe Biden. "Horseshit!" one man yelled out when McCain said he had congratulated Obama. "Thanks for the fair shake, media!" another guy hollered after McCain, his wife Cindy and Sarah Palin and her husband Todd had left the stage. "You guys are worthless."

But even the anger was muted, and the boos were overwhelmed by applause, as McCain noted the historic nature of Obama's win. Most of the people at the Biltmore were wealthy Republican donors, not furious grassroots conservatives, and they seemed to know what the night's outcome would likely be before they arrived. The spread was lavish enough to keep them comfortable; even the Port-a-Potties set up on the lawn seemed extravagantly luxurious, with wood paneling on the walls. And the worries people had about the election's results were, well, pretty much what you'd expect, considering who they were. "I hope my CPA can find me a nice home in Portugal, and I can move my money out of the country before we start sharing it with everyone else," James Tooms, a Scottsdale businessman, said with a sardonic grin before McCain spoke.

The midnight rally in Prescott, the night before, had been more for the true believers. Introducing her husband, Cindy McCain had choked up. "It's been a long day coming home, but a wonderful day," she told a rowdy crowd at the Yavapai County Courthouse. "I want to tell all of you in front of my husband how proud of [him] I am and how proud Arizona is of him." McCain roamed the stage, speaking without the teleprompters that he's proven so miserable at using. (But unscripted McCain, after a day that saw him hit seven states, was a little uneven. "There will be times when you say, 'What is he thinking about?'" he told the crowd -- sort of proving his point.)

The site was a symbolic touch; McCain has held election-eve rallies in Prescott since his first Senate campaign 22 years ago, and Barry Goldwater launched his 1964 presidential campaign in the same spot. McCain couldn't seem to get away from Goldwater references -- he watched election returns in the Biltmore's Goldwater presidential suite. Of course, that campaign didn't turn out so well, either.

And as it happened, this one didn't either. Still, McCain's die-hard fans in Prescott were sure their man would pull it out, even as the clock tipped past midnight and election day began. "I love John McCain," said Susan Wholwend, 55, a newspaper courier from Prescott (who said the morning papers would be late because she was at the rally). She insisted McCain would "definitely" win, and got to the rally a little after 6 p.m., which turned out to be nearly seven hours before McCain did. "Most of the polls are done by the liberal media, which is -- you know -- to the left, so I don't believe the polls."

Later Tuesday, in Phoenix, McCain's aides were a little less sure. His closest adviser, Mark Salter, didn't sit down to finish writing McCain's concession speech until shortly after polls started closing back east; he didn't want to have to put one together if there was still a chance it would turn into a victory address. McCain's staff spent Tuesday afternoon hanging around the Phoenix Biltmore Resort, feverishly looking for good news wherever they could find it. One press aide reported at lunchtime that a bird had shit on him, apparently a sign of luck, at least to some people. As reports of record turnout hit the news, the McCain brain trust tried to spin it as a good sign for their side; the more people who voted, went the theory, the more Obama's support would be diluted.

"Anecdotal evidence about election day turnout usually doesn't pan out," said unruffled senior adviser Charlie Black, sounding as if he were analyzing an election for one of his less savory former clients. "I believe it will be close."

But it wasn't. And in his concession, McCain said he wouldn't dwell on what went wrong. "Every candidate makes mistakes, and I'm sure I made my share of them," he said. "But I won't spend a moment of the future regretting what might have been." The race tipped, finally, decisively, in Obama's favor after McCain and his team completely botched their response to the economic collapse in September. But it was probably never a campaign a Republican could win after eight years of the disastrous Bush administration. That McCain and his closest aides seemed to like nothing more than making things up as they went along didn't help matters, of course. Even when they tried to enforce some Bush-like discipline , they couldn't find a consistent message.

For now, at least, McCain truly seemed to be at peace with the result. "I would not be an American worthy of the name should I regret a fate that has allowed me the extraordinary privilege of serving this country for a half a century," he said. "Today, I was a candidate for the highest office in the country I love so much. And tonight, I remain her servant. That is blessing enough for anyone, and I thank the people of Arizona for it."