Beltway journalists continue to see the Monica Lewinsky affair as just as bad as, if not worse than, the endless parade of crimes committed over the last eight years. 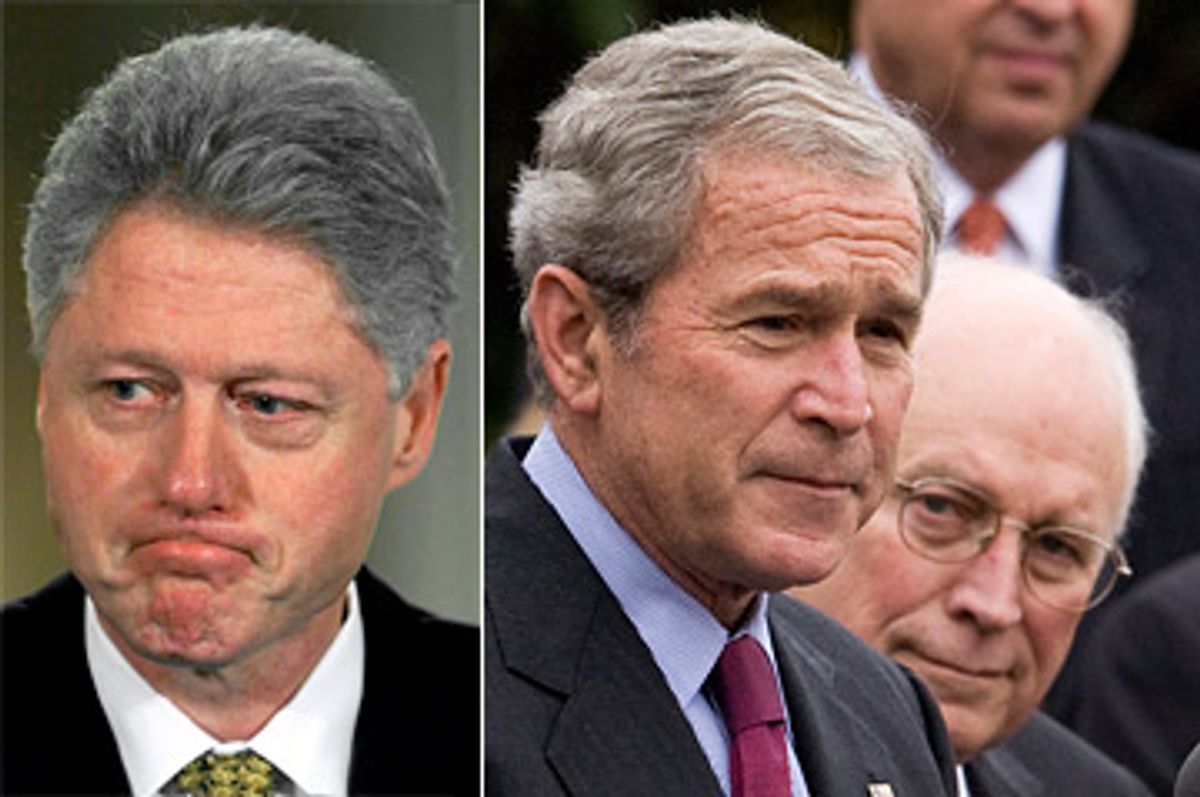 In today's New York Times, Maureen Dowd reveals (as always) standard Beltway thinking by writing that Barack Obama "has the chance to make the White House pristine again" -- somethings, she says, we haven't had for 16 years:

But the monuments have lost their luminescence in recent years.

How could the White House be classy when the Clintons were turning it into Motel 1600 for fund-raising, when Bill Clinton was using it for trysts with an intern and when he plunked a seven-seat hot tub with two Moto-Massager jets on the lawn?

How could the White House be inspiring when W. and Cheney were inside making torture and domestic spying legal, fooling Americans by cooking up warped evidence for war and scheming how to further enrich their buddies in the oil and gas industry? . . . .

These things are not equal.  They're not even comparable.  But in her desperation to establish false equivalencies -- the central article of faith in the modern journalist's religion -- Dowd argues that Clinton dirtied the White House by having oral sex and liking hot tubs and, likewise, George Bush also dirtied it by destroying the Constitution, torturing people, invading and destroying another country based on false pretenses and spying on American citizens (and, just by the way, Bush and Cheney weren't "making torture and domestic spying legal"; they were doing those things in violation of the law).

The stain Bill Clinton left on Monica Lewinsky's dress isn't remotely comparable to the stain George Bush and Dick Cheney have left on the Constitution, our political values and our national image -- to say nothing of the indelible bloodstains on their hands.  But for so long, Beltway journalists have treated those things as though they're equal; more accurately, they were -- and remain -- far more offended by the former than the latter.  To this day, David Broder still insists that Bill Clinton should have been forced to resign over the sex he had with Monica Lewinsky, whereas nothing that George Bush did merits removal from office or even resignation, and especially not criminal investigation and prosecution (holding lawbreaking Bush officials accountable is to commit the ultimate Beltway sin of "criminalizing our politics").

There are numerous reasons for this false equivalency and for the refusal to internalize the true extent of criminality and extremism that has taken place over the last eight years.  Vapid reporters are more interested in, and capable of understanding, titillating sex scandals than they are dreary, boring matters like lawbreaking, torture, surveillance, and pretexts for wars.  They still perceive George Bush as political royalty and a strong and Serious protector, an inherently good man.  Many of them were supportive of these criminal policies, were vital in enabling them, and thus want to avoid any recognition of how extraordinary, how unique, they were.  But most of all, internalizing the full extent of lawbreaking, bloodshed and radicalism of the last eight years would compel us to hold the wrongdoers accountable and come to terms with what has really been done by our Government.  The overriding goal is to avoid that.

Instead, we'll just dismiss the last eight years as nothing really notable -- just the standard, garden-variety failures, disappointments and corruption we normally see from politicians.  Hence: Bill Clinton had an affair and let contributors stay in the Lincoln Bedroom; George Bush tortured people, stomped on the Constitution, chronically broke our laws, started wars based on manufactured pretexts, committed felonies by spying on American without warrants, abolished habeas corpus, imprisoned human beings in "black sites," etc.  Boy, politicians sure are bad.  Let's move on and hope Obama doesn't do what Clinton and Bush both did.   That's the mentality that ensures that our current political leaders -- and their enablers in the Beltway establishment -- won't be held accountable for what they've done.

UPDATE:  The Obama appointments that will reveal the most about what he intends to do about these matters will be his Justice Department selections -- particularly his Attorney General and head of the Office of Legal Counsel (where John Yoo, among others, did their dirty work).  Regarding the latter position, Anonymous Liberal has an excellent suggestion.