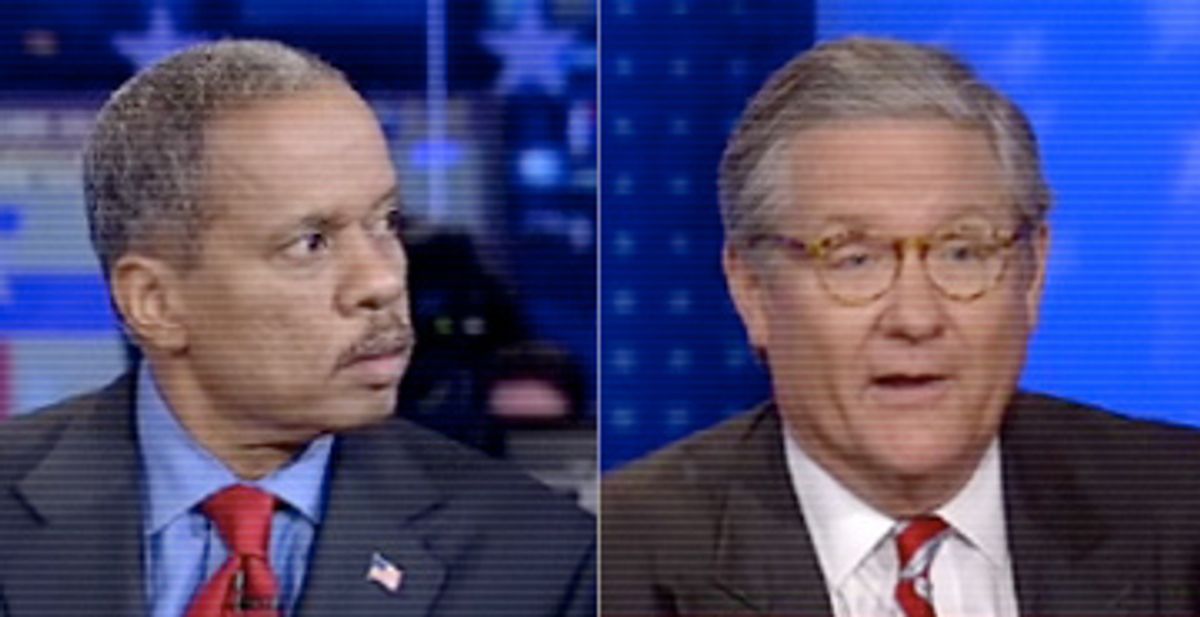 On my way toward the prodigious outdoor party that broke out shortly after 11 p.m. on the streets of Fort Greene, the multiracial Brooklyn, N.Y., neighborhood where I live -- a party to celebrate a moment of generational and political shift in America unlike anything I've ever experienced -- I spent a few hours with a somewhat different demographic. But I'm not here to kick sand in the face of the Fox News Channel. For the first time in its existence, Fox on Election Night 2008 seemed a weak and piteous thing, trying to cover its nakedness with shreds of dignity, and staring mortality right in the face.

And I'm just talking about the commercials. Before Brit Hume informed Fox viewers just past 11 p.m. Eastern, in the dispassionate tones of a physician delivering a grave prognosis, that Barack Obama had been elected president, we got several iterations of a 60-second ad for Plavix, a pharmaceutical "proven to help protect against future heart attack or stroke." This was followed, at least once, by a commercial for another drug (I didn't catch its name) that may relieve symptoms of chronic obstructive pulmonary disorder. Along with heart failure and difficulty breathing, we also had some unintentional humor on the road to President-elect Obama's victory address. Much earlier in the evening we were told that Fox's Election Night coverage was brought to us by "Crest -- Whitening Expressions!"

Beyond the medicinal cornucopia, Fox was a pretty stolid, gloomy-Gus affair during the five hours I logged as a viewer Tuesday night, with little of the erratic behavior that accompanied the 2006 midterm elections. OK, there was bargaining and grumpiness and recrimination and reiteration of defunct McCain campaign themes and obsessive focus on tiny shreds of hope (Florida's still-red 13th Congressional District, a Fox fave) and massively boring conversations about the union election rule known as "card check," whatever that is. But sometimes they made Fred Barnes shut up.

From the beginning of the Fox election broadcast at 6 p.m., it was brutally clear that Hume and Shep Smith and Chris Wallace and all their guests and commentators had seen the exit-polling data and were not laboring under the delusion that those numbers reflected some 2004-style miscalculation. Sure, earlier in the day the network had ventilated a certain amount of unfounded racist paranoia, endlessly repeating some footage of a surly-looking fellow outside a polling place in Philadelphia who apparently represented the leading edge of a massive "Black Panther" conspiracy to intimidate white voters. (I guess it worked!)

But in general, the Fox team displayed an oddly jolly professionalism. They seemed determined to take their medicine, with the stick-to-itiveness of a losing football team dreaming of bright days far in the future or the past (and the near certainty that their core audience was going to bed, by the millions, in despair). Though it went briefly wobbly on Ohio, Fox didn't really show any particular reluctance to call states for Obama, and after New Hampshire (at 8:11) and Pennsylvania (at 8:30), its commentators quit pretending there was any serious doubt about the outcome and began arguing about what kind of president Obama would be -- and what kind of country he was inheriting from you-know-who.

Mused National Review editor Rich Lowry, on the topic of Pennsylvania, Ohio and Virginia, "It's a bad thing for the Republicans when you drill down into these states and you see lots of new voters, newcomers. It's like, where did all the Republicans go? Did they all move to Utah?"

Barnes kept circling back to his meme of the moment, the idea that a "center-right" nation has inexplicably elected a dangerous left-winger. Bill Kristol was ready to join in the wailing and gnashing of teeth, but Karl Rove -- I'll say that again, Karl Rove -- struck a far more conciliatory tone, describing Obama as "a very smart politician who has clearly moved to the center over the course of this campaign." Mind you, Rove appears to believe that Nancy Pelosi is the dangerous radical in Washington, one who yearns to drag a moderate president-elect into quasi-socialistic excesses. But at least that's not a theme we've heard a zillion times before, and it could reflect Fox's initial line of attack to the puzzling new order in Washington.

During the long hour between 10 and 11 p.m., when it was clear to everyone that Obama had been elected but those words could not quite be spoken, the Fox crew filled the time with an awkward, undercaffeinated blend of halfhearted nostalgia and uncertain looking forward. They lingered lovingly over the information that McCain had successfully defended Kentucky, a state never in doubt, and then tiptoed delicately to the subject of Alaska, and more specifically its governor. Was Sarah Palin the albatross that doomed McCain or the life preserver that kept him, if barely, afloat? Even on Fox News no one had the stomach on this historic night to begin hyping her as a 2012 candidate, but that possibility hung there in the background like a rancid moose cadaver.

Bill Kristol's argument, as far as I can understand it, was that while a majority of exit-poll respondents said that Palin was an important issue, those people supported Obama slightly less strongly than those who didn't care about Palin, and therefore she was a net plus for the GOP ticket. I know, it's a ringing endorsement, a clarion call of freedom from the Last Frontier, and the opening helicopter-rifle shot of the next presidential campaign: Sarah Palin! Slightly less disliked than her grumpy, geriatric running mate! But it was all he had.

Juan Williams forcefully disagreed with Kristol, arguing the conventional wisdom that Palin was a dud, and the two of them got into it for a couple of minutes. It was some profoundly weak shit on all sides. I think Barnes agreed with Kristol but it was hard to say. He only wanted to talk about card check some more. He really, really does not like card check, and he thinks that Obama, the most left-wing president and politician and human being in the history of everything, is going to damn well jam card check down our free-thinking American throats with the help of the unions. Who are oh-so-powerful in American life these days. I think I voted yes on card check when I was portraying an Illinois Democratic congressman named Mel Price in Mr. Lukes' mock-legislature class in 1979, and I haven't heard anything about it since.

Rove's former boss, the onetime darling of Fox News Channel, was mentioned exactly once, and that was by accident. Chris Wallace cut in at one point to announce that after some delay the network was calling Texas "for George W. Bush." He corrected himself right away, and Rove broke into an impromptu version of the Texas Longhorns fight song. Hume conducted an interview with a young Wisconsin congressman named Paul Ryan, who's an up-and-coming star in Republican politics, that was actually quite interesting. Ryan sees an opportunity in this debacle to get the party back to its onetime free-market principles, and he might be right about that.

Hume and others tried to hold out some faint hope that Mary Landrieu might lose in Louisiana (she didn't) or that Mark Udall might be surprised in Colorado (he wasn't). Hume briefly mocked Rep. Jack Murtha, D-Pa., for prematurely declaring victory in his tight reelection race, even though Murtha would be proved correct. But then the West Coast polls closed, and I'm damned if Fox didn't handle the chore with class and professionalism. "Now I want to tell you something you realize has been coming for some time," Hume intoned. "Senator Obama wins California's 55 electoral votes, and that means, in our view, that Barack Obama is the president-elect of the United States."

After a few more brief comments, Hume got out of the way and let Juan Williams talk, and I have to say it made for remarkable television. Williams is a contentious fellow who has long borne the burden of being the designated African-American centrist on both Fox News and National Public Radio. His antipathy toward Barack and Michelle Obama has been evident throughout this election season, but on Tuesday night, faced with the almost unbelievable spectacle before him, Williams had his finest moment. There was nothing fake about his intense emotion or the eloquence of his response -- and if you saw it you'll never forget it.

After Williams' observation about the potent symbolism for all Americans of seeing the Obamas and their two daughters in the Rose Garden, everyone wanted to get in on the act. Kristol noted that Obama would wind up getting more votes than any presidential candidate in history. Rove said that the idea of "an African-American candidate who was aspirational and inspirational, who appealed to the better angels of our nature, is very powerful. It's a night for our country to celebrate, and for the world to celebrate." Barnes admitted that Obama wasn't a "grievance candidate." Then he started talking about card check.