"The Boy in the Striped Pajamas"

When you use Nazi death camps as Oscar bait, you know you've hit rock bottom. 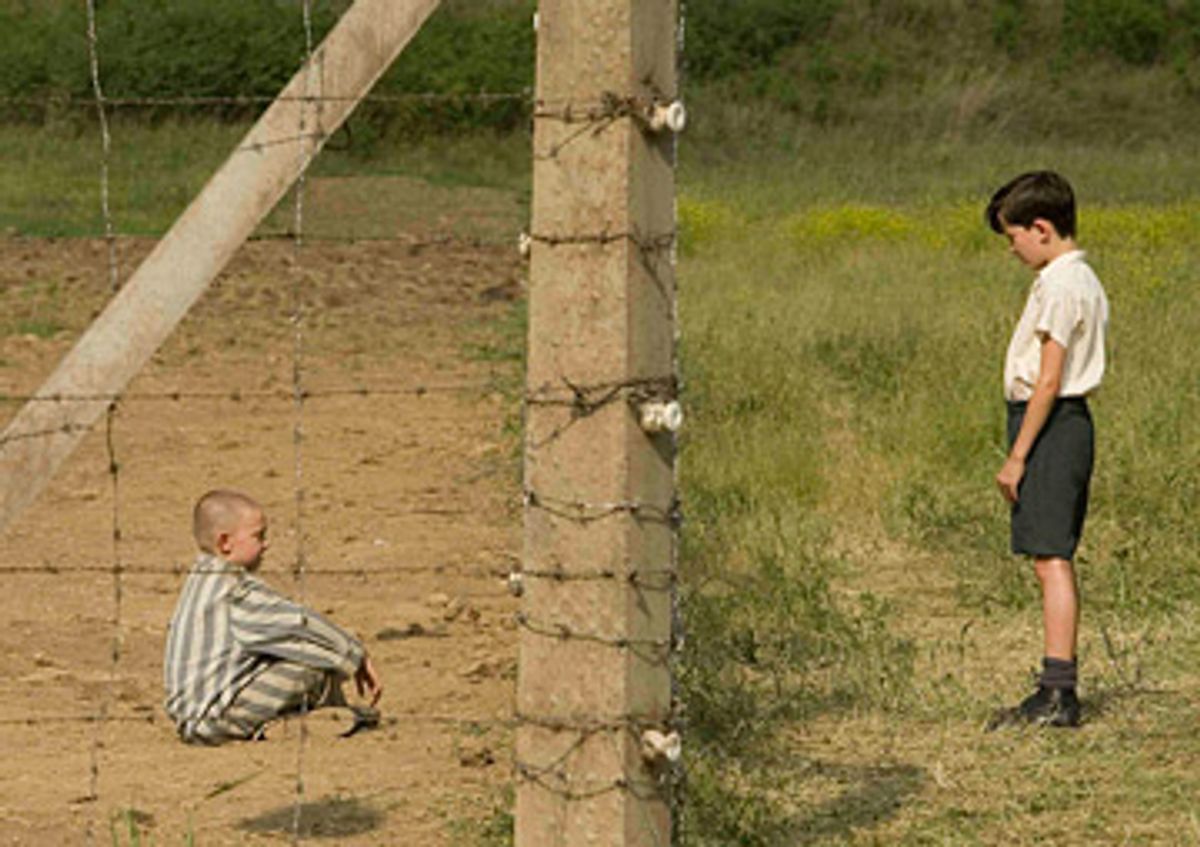 There are plenty of subjects -- old yellow hunting dogs, spirited folk bravely facing cancer -- that can be easily milked for maximum pathos. But you've reached rock bottom when you start milking the death camps, as "The Boy in the Striped Pajamas" does. Directed by Mark Herman (who adapted it from John Boyne's novel), the picture strives for a kid's-eye-view of Holocaust horrors. Little Bruno (Asa Butterfield) has a Nazi officer dad (David Thewlis) who has just moved the family from Berlin to a stark box of a house out in the country so he can be -- wink, wink -- closer to his work. One day Bruno asks his mother (played, with much hand-wringing, by Vera Farmiga) about the "farm" he can see from his bedroom window. Why do the farmers all wear pajamas, he wants to know? Later, he notices smoke rising from the "farm" smokestacks -- what's that about? Mummy, being a decent person as well as willfully clueless, doesn't know how to answer. But Daddy, when asked about "those people," has a ready answer for little Bruno: "Those people -- you realize they're not really people at all."

If you're smart, and even if you're not, you know in those early moments where "The Boy in the Striped Pajamas" is headed. Before long, lonely Bruno befriends a gaunt, hollow-eyed little boy from the "farm" (Jack Scanlon); they blink at each other from opposite sides of an electrified barbed-wire fence. (This "farm" is conveniently low on armed guards.)

I realize that at least in vague terms, "The Boy in the Striped Pajamas" is defensible as a tale of hope and friendship in the face of unspeakable and inhuman horror. And Herman takes great pains to keep the proceedings as tasteful as possible -- which makes it worse. This is a U.K. production, and so all the performers have upper-class, actory English accents. That's a bit hard to get used to at first, although it's worth noting that real-life Nazis wouldn't be walking around speaking English with a German accent, either, as they do in the movies -- it's just a convention that we're used to. Still, even that logic breaks down in the case of Farmiga: She's an American, but she uses an English accent here -- go figure. And so the refined accents, the restrained harmony of the production design, the just-polished-enough cinematography (by Benoit Delhomme) all enhance the formality of the proceedings. The movie keeps reminding us what a classy enterprise it is, archly setting us up for the way -- or so Herman must have hoped -- it'll have us bawling by the end.

At the end, I wasn't bawling, just dying to get the hell out. In the early moments of "The Boy in the Striped Pajamas," I wondered if this might be an OK movie for kids, for the way it tries to spell out the horrors of the camps in gentle but simple terms. Then I remembered my own confusion when, around age 8, I asked my mother about the Holocaust and couldn't for the life of me wrap my brain around it: It made no sense whatsoever. And watching "The Boy in the Striped Pajamas," it struck me that weaving a touching little tale about a death-camp friendship is actually a pretty bad way to teach kids about the Holocaust. (I must add that the ending is likely to be extremely upsetting for children.) Not everything in life, or in history, needs to be framed in terms of things children can relate to. I'm not talking about shielding kids; I'm just saying that some ideas are so horrific that they shouldn't be framed in childish terms. The Holocaust, as Isser Harel, the Israeli secret service agent who helped capture Adolf Eichmann, put it, "had no place in the world of reality." Forget explaining it to children; it's not even something adults can comprehend. The last thing it should be used for is Oscar bait.