Obama and the dawn of the Fourth Republic

His victory really may mark the beginning of a new era in American history. 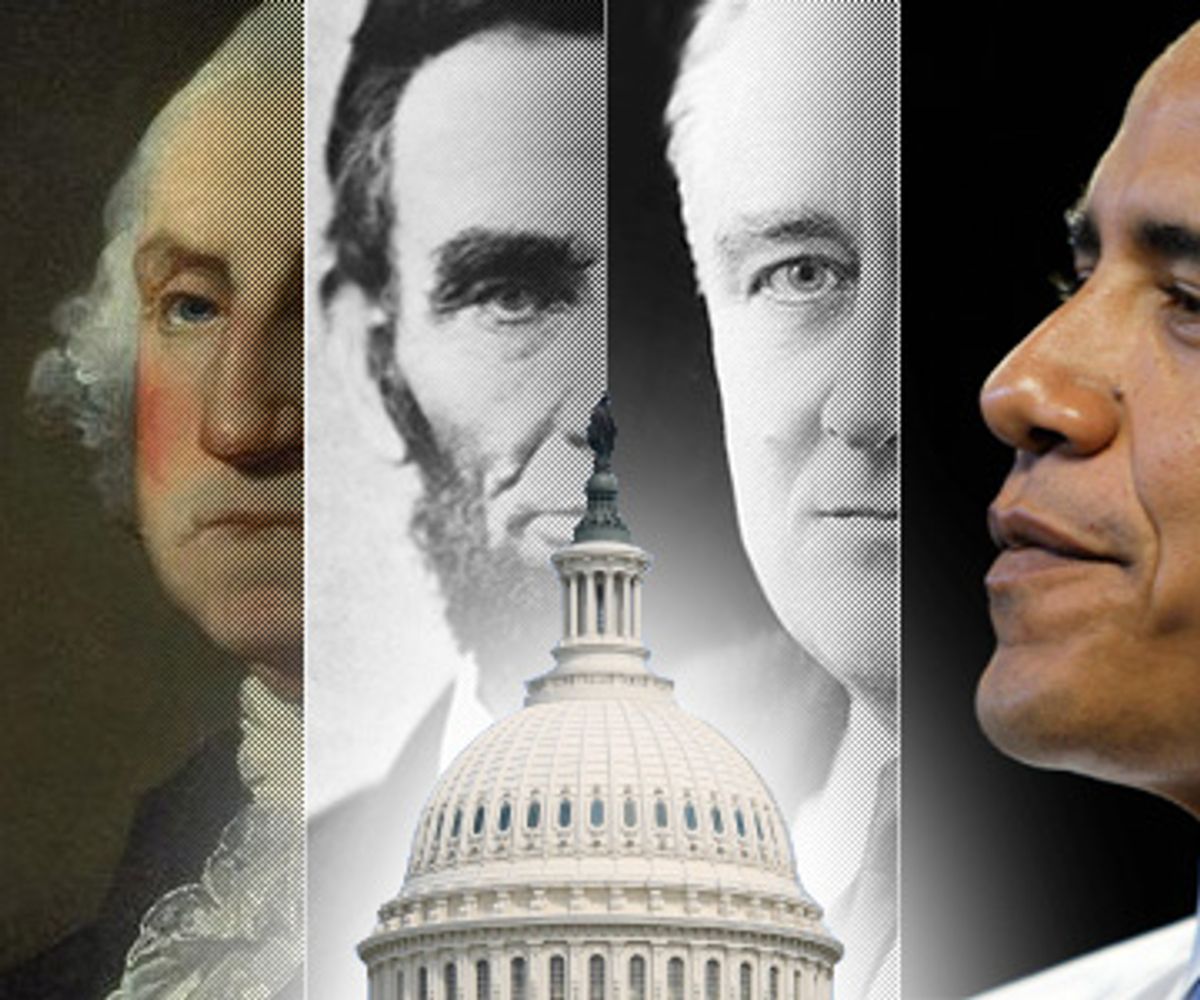 The election of Barack Obama to the presidency may signal more than the end of an era of Republican presidential dominance and conservative ideology. It may mark the beginning of a Fourth Republic of the United States.

In the past generation Bruce Ackerman, Theodore Lowi and I, in different ways, have used the idea of "republics" to understand American history. Since the French Revolution, France has been governed by five republics (plus two empires, a directory and a fascist dictatorship). Since the American Revolution, we Americans have been governed by several republics as well. But because we, like the British, pay lip service to formal continuity more than do the French, we pretend that we have been living under the same government since the federal Constitution was drafted and ratified in 1787-88. Our successive American republics from the 18th century to the 21st have been informal and unofficial.

Yes, you read that correctly -- 2004, not 2008. A case can be made that the new era actually began four years ago. True, Bush, a relic of the waning years of the previous era, was reelected. But immediately after his reelection, the American people repudiated his foreign policy and his domestic policy, including Social Security privatization. In 2006 the Democrats swept the Republicans out of Congress, and in 2008 they have recaptured the White House.

To be sure, every shift in partisan control of government does not amount to the founding of a new republic. Obama did not win a landslide or have long coattails. His coalition is a slightly larger version of the Democratic Party that was forged in the partisan realignment of 1968-72. And the public is still divided among liberals, moderates and conservatives much as it has been for a decade or two. But my scenario does not depend on Obama's election or even on Democratic control of Congress. The Fourth Republic might have gotten off to a start -- a bad start, but a start -- under Republican auspices.

Policy shifts, more than public opinion polls or election results, suggest that a truly transformative moment may be upon us. The first three American republics display a remarkably similar pattern. Their 72-year life span is divided into two 36-year periods (again, give or take a year -- this is not astrology). During the first 36-year period of a republic, ambitious nation-builders in the tradition of Alexander Hamilton strengthen the powers of the federal government and promote economic modernization. During the second 36-year phase of a republic, there is a Jeffersonian backlash, in favor of small government, small business and an older way of life. During the backlash era, Jeffersonians manage to modify, but never undo, the structure created by the Hamiltonians in the previous era.

We see this pattern of Hamiltonian nation-building and Jeffersonian backlash in the First, Second and Third Republics of the United States. Between 1788 and 1824, the ideas of the centralizing, nation-building Federalist Party of George Washington and Alexander Hamilton succeeded. Although Jefferson and his small-government allies controlled the White House and Congress for much of this period, in practice they implemented a streamlined, cheaper version of the Federalist plan for America. Jefferson's Treasury Secretary Albert Gallatin, for example, supported a program of infrastructure and industrialization not all that different from Alexander Hamilton's. And Jefferson himself, contradicting his small-government philosophy, exercised sweeping powers as president, purchasing the Louisiana Territory from France on his own initiative and promoting a federal embargo on U.S. exports to Britain and France. The first Jeffersonian backlash came later, under Andrew Jackson and his allies between 1824 and 1860.

The election of Abraham Lincoln in 1860 triggered the secession of the South, the Civil War and Reconstruction -- the Second American Revolution and the founding of the Second Republic of the United States. During and after the Civil War, Lincoln's Republican Party remade the United States. In addition to crushing the South and freeing the slaves, the Republicans nationalized the banking system, promoted U.S. industry through high tariffs, carpeted the continent with federally subsidized railroads and used the sale of federal lands to pay for state colleges. From 1896, the Jeffersonian backlash against the system created by the Lincoln Republicans was led by Southern and Western agrarian populists and middle-class Progressives in the Northeast who, for different reasons, were alienated from the new order. While they achieved some reforms, the Jeffersonians failed to modify the essential features of the Lincoln-to-Hoover Second Republic.

The Third Republic of the United States was built by New Deal Democrats and liberal Republicans between 1932 and 1968. During the initial Hamiltonian phase, even more power was centralized in the federal government, which carried out national economic regulation, built power plants and electric grids, highways and airports, created Social Security, Medicare and unemployment insurance, and used federal power to dismantle racial segregation. Inevitably the period of Hamiltonian reform was followed by a Jeffersonian backlash that lasted from Richard Nixon to George W. Bush. Once again, populists and libertarians emphasizing different parts of the Jeffersonian legacy tinkered with the new order but failed to overturn it. Under Reagan and the second Bush, the right managed to cut income taxes and capital gains taxes. But their failure to shrink the size of post-New Deal government meant that their tax cuts, instead of inspiring less spending, merely produced enormous deficits.

The election of 2004 was a fluke, like the election of 1824. The Jacksonian era -- that is, the Jeffersonian backlash period of the 1788-1860 First Republic -- began in 1824, even though John Quincy Adams became president after losing the popular vote to Andrew Jackson. (Jackson won the next two elections.) Likewise, the Fourth Republic arguably began in 2004, the narrow reelection of George W. Bush notwithstanding. 2008 is Year Four of the Fourth American Revolution.

If this analysis is right, what causes these cycles of reform and backlash in American politics? I believe they are linked indirectly to stages of technological and economic development. Lincoln's Second American Republic marked a transition from an agrarian economy to one based on the technologies of the first industrial revolution -- coal-fired steam engines and railroads. Roosevelt's Third American Republic was built with the tools of the second industrial revolution -- electricity and internal combustion engines. It remains to be seen what energy sources -- nuclear? Solar? Clean coal? -- and what technologies -- nanotechnology? Photonics? Biotech-- will be the basis of the next American economy. (Note: I'm talking about the material, real-world manufacturing and utility economy, not the illusory "information economy" beloved of globalization enthusiasts in the 1990s, who pretended that deindustrialization by outsourcing was a higher state of industrialism.)

Naturally, the Americans alive during the founding of new American republics have other issues on their minds. The Civil War was fought over slavery, not steam engines, and the New Deal, for all of FDR's commitment to nationwide electrical power fed by hydroelectric dam projects, was animated by a vision of social justice. The broad outlines of technological and economic change merely provide the frame for the picture; the details depend on the groups that emerge victorious in political battles.

That is why it is too early to predict the outline of the Fourth American Republic. Its shape depends on the outcomes of the debates and struggles of the next generation. But it is possible to speculate about its life span. If the pattern of history holds, the Fourth Republic of the United States will last for roughly 72 years, from 2004 (or, if you like, 2008) to 2076. And if the pattern of the past holds, we will see a period of Hamiltonian centralization and reform between now and 2040, followed by an approximately 36-year long Jeffersonian backlash motivated by ideals of libertarianism and decentralization.

And even if I am right that the new era began four years ago, historians are likely to identify the first president of the Fourth Republic of the United States as Barack Obama, not George W. Bush. Obama may join Washington, Lincoln and Franklin Delano Roosevelt on the short list of American presidents who, thanks both to their own leadership and the fortuitous timing of their elections, presided over the refounding of the United States. Yes, he can.